The morning started off with a light rain, continuing from last night, getting the day off to a somewhat miserable start. But, as much as I might have wanted to lounge around in the shelter for awhile, I had to get moving; there was family to meet in Pen Mar.

Yesterday, during my stop to get water before climbing the hill to the shelter, I called my mom and told her I was going to be in Pen Mar today, and asked if she could contact her two brothers who were unable to make it out to Harpers Ferry on Saturday (one was out of town, the other was dog sitting) and see if they would be able to make it up to Pen Mar Park in the morning. (Short notice, I know, but I wasn't really sure until then when I'd actually be getting there.) A few hours later, the confirmation came in that my mom and the two brothers would meet me there.

Which meant that I had to get moving in order to make it there when I said I'd be there. I left the shelter a little before 8:30, later than I planned, expecting a 2 mph pace would put me there around 10:30.

The hike started out not so bad from the shelter, but the descent down the other side of the mountain was through a poorly blazed rock field, that was (especially with my still very heavy pack, and the rain) quite strenuous and slow going. It seemed very much a choose-your-own-path trail between blazes, and I wound up losing the trail at one point. Fortunately, Apple Maps actually had the path of the AT, and I was able to reorient myself back in the direction of the trail. Once I got back on the trail, I noticed little orange flags in the ground, marking the path of the trail. I don't know if they were there the whole time and I just didn't notice (or tuned them out since they weren't blazes), but having them there to follow made the rest of the descent down the rock field much easier.

As it turned out, I got to Pen Mar Park right at 10:30, shortly after the rain stopped, and wound up having to wait until 11:30 for my mom and her brothers to arrive. The wait was made much easier, though, by the presence of trail magic by the Rouzerville United Methodist Church, who had sweet tea, lemonade, sandwiches, apples and bananas, and some other snacks. (They are doing this every Wednesday in June this year.)

I chatted with the people from the church, and with other hikers that were there, until my family arrived. The four of us left, and went to the local Applebees for lunch, where I was swarmed by flies in a way I'm not when I'm on the trail. It was really rather off-putting in a restaurant. The food was good, at least. (Thanks again, Uncles Carl and Dick for coming and buying me lunch!)

Returning to the trail, it was only a short distance to the Maryland/Pennsylvania border. Six states down, eight to go! 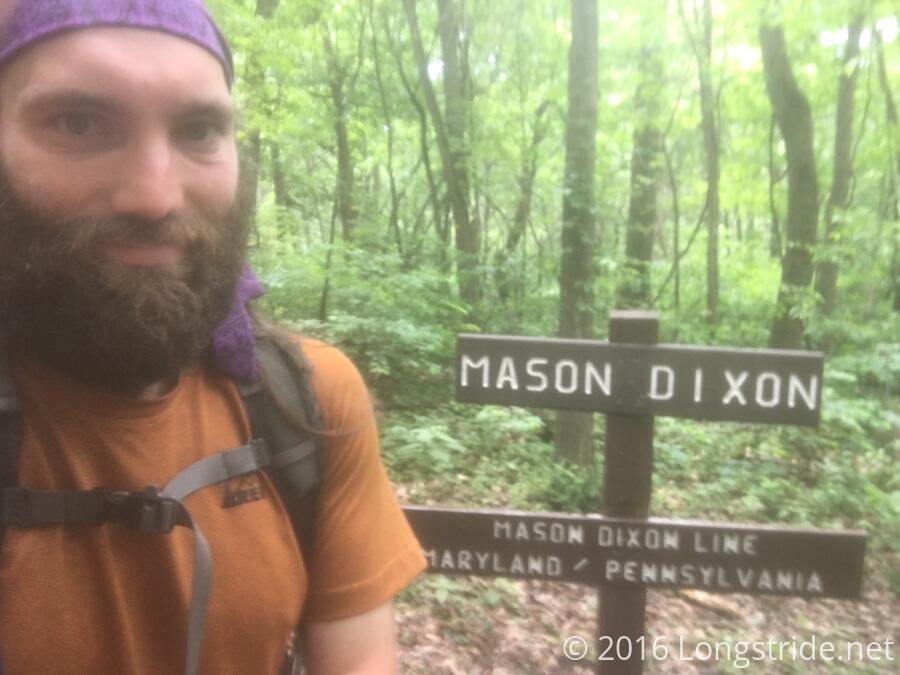 After another two and a half miles, there was a second bit of trail magic: someone (who is unclear; it might have been another thru-hiker) left a cooler with sodas and beer (the beer was all gone by the time I got there), and bags of chips. I stopped and had a soda, before continuing on.

After reaching the Deer Lick Shelters (a pair of identical shelters at the same location), I decided to stop there for the day. The 3 hour delay at Pen Mar (an hour of waiting, and then two hours with my family), though welcome, threw off my rhythm. I just didn't feel like going on. (This made today a short 9.6 mile day, rather than the 13.2 mile sort-of short day I planned on.)

There were only five people staying at the shelter tonight. (And for good reason; there were two more shelters just two and three miles further north. So, there was a steady stream of people arriving at the shelter, looking at the logbook, and their guidebooks, and deciding to push on.) Two of them went off into the woods to tent, leaving three of us to two shelters. As luck would have it, I wound up with a shelter to myself tonight.

Since I stopped relatively early, I managed to finish all my chores by 7, which was welcome since it gave me some time to watch an episode of Orphan Black before going to sleep to the sound of rain.