A relatively nicer day than the weather forecast suggested got me a lot of great conversation. Oh, and closer to the completion of my Tuscarora-Appalachian Trail loop, too.

Sometime early in the morning, a very light rain began to fall. It wasn’t enough to douse the large smoldering log on the fire, which was still providing enough warmth that the space in the shelter in front of the fire pit was toasty warm. (This was quite convenient for the hiker from the group at the tent pad yesterday who’d moved his sleeping bag there in the middle of the night.)

With a slightly shorter day today, and the rain forecast, I didn’t bother to set an alarm, so I woke up a bit after sunrise, and started hiking shortly before nine, still with a very light rain falling. I found it amusing that this would mean that both times I’d hiked through Caledonia State Park, I’d be getting wet. (It rained, briefly but heavily, when I was going through the park in 2016.) This time, though, the rain was more an intermittent drizzle, and really, by the time I’d left the shelter, it was so little as to not be worth worrying about. Cinderfella left shortly before I did; given he’s hiking faster than I am, I’ll probably not see him again.

It was a nice (though slightly more rocky than I’d remembered) downhill to the park, and I stopped briefly to get some extra water from the park’s restroom.

Much of the day, the trail was fairly nondescript and very much a typical Appalachian Trail “Green Tunnel”. There weren’t any views at all. A good part of the trail had a soft pine needle floor, which made for easy hiking, but, not surprisingly, there were lots of rocks around Rocky Mountain.

I stopped for a break at the side trail to the Rocky Mountain Shelter. With the weather not being amazing, I decided that the three-tenths of a mile to the shelter was too far, and I’d have my break on a large flat rock near the sign to the shelter. I wasn’t the only one with that idea; there were two other hikers there, Cody and Rita, who were out for a hike from Caledonia State Park to Snickers Gap in Virginia, about half a mile north of Bears Den. While we were there, a pair of walking sticks decided that the sign was an opportune place to get to know each other quite well. 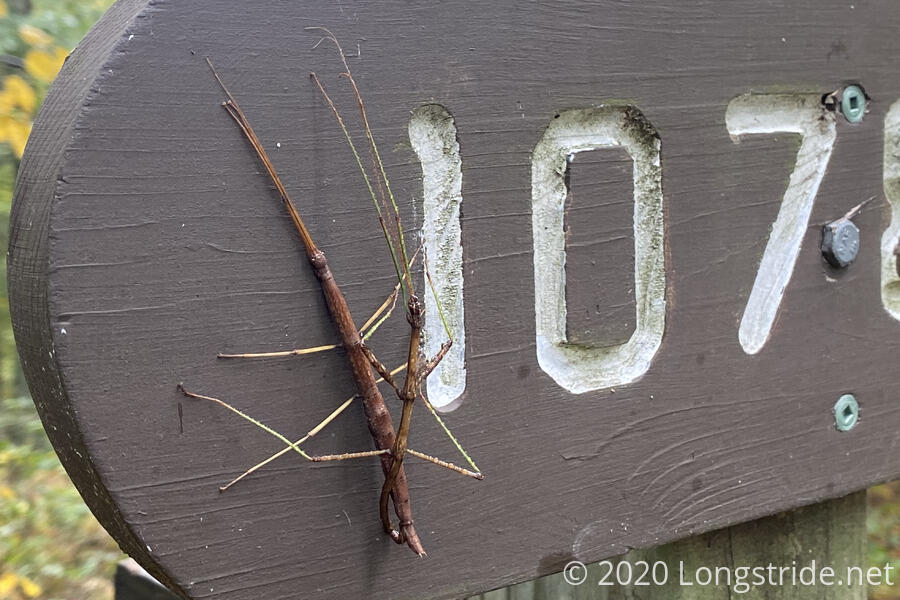 I continued on, making fairly good time. I passed up on visiting the Chimney Rocks overlook, though I can’t remember if it was because of the still-overcast skies, or if it was because Happy Feet showed up and we wound up talking for a mile or two about trails, in particular the Pacific Crest Trail, as we flew down the mountain towards the Tumbling Run Shelters. (He passed me two days ago, but had taken yesterday off to visit Gettysburg.)

Happy Feet, and a few others he’s hiking with, are attempting the “Four State Challenge”. This requires a hiker to hike, in one day, the entirety of Maryland, and a short part of West Virginia, about 44 miles in total, so that they can be in four states in a single day: those two states, and Pennsylvania and Virginia.

Once we arrived at the Tumbling Run Shelters, we parted ways; I was due for a break, and he was planning a few miles further than I was for the day so that he’d have a shorter distance needed to hike tomorrow (since there isn’t a campsite right at the Pennsylvania-Maryland border).

Tumbling Run, like Quarry Gap, was a pair of smaller shelters, though without the connective roof between them. It did, though, have a covered picnic area, and a large area for camping. The trail maintainers also affixed signs to the shelters, labeling one as “Snoring” and the other as “Non-Snoring”.

A sign on the shelter indicated that all shelters and privies within land owned by the Pennsylvania Department of Conservation and Natural Resources were closed, due to COVID. Unfortunately, since the sign did not actually indicate which shelters that included (and there haven’t been property boundary markers that indicate who owns the land the trail is on), without further context, it was hard to tell if the sign was advisory (“be aware, other shelters may be closed”), or actionable (“this shelter is closed”, as was the case with several notifications at Pine Grove Furnace and further north that explicitly said that the Toms Run Shelter, a few miles south of Pine Grove Furnace, was closed). But, since I wasn’t staying at Tumbling Run, the state of that shelter didn’t matter much to me.

I continued downhill from Tumbling Run, and refilled my water bottle at a faucet at Old Forge Park, at the bottom of the hill. A little further on, I noticed a clearing where the Antietam Shelter was supposed to be. I was a little surprised to see the shelter missing, but I always thought it odd that there’d be three shelters located within less than a four mile stretch of trail, so if any shelter was going to disappear, I’m not surprised it was that one.

The shelter’s disappearance was made clear once I got to my destination for the day, the Deer Lick Shelters, a pair of four-person shelters side-by side with a picnic table between them. A notice on one of the shelters indicated that Antietam Shelter was relocated to Cowans Gap State Park (on the Tuscarora Trail) on “5/3-4”, with no year indicated, which explained why the shelter was missing. (Though it would have been nice to have known where in Cowans Gap the shelter had been relocated to, since I'd hiked through that park last week.)

A creek just north of the shelter was dry — not surprising since the stream at Quarry Gap was also dry. Fortunately, a spring a quarter mile away from the shelter was flowing, albeit slowly, and I was able to collect sufficient water for dinner. (I didn’t worry too much about having enough for tomorrow; I’ll be hiking through Pen Mark Park early tomorrow morning, and can get water for the day there.)

Shortly after I got back from the spring, Dennis, a local weekend hiker who owns a BBQ business, arrived. Shortly after, an older hiker with two pre-teens showed up, and then went uphill a bit to one of the shelter’s camping areas to hammock. Happy Feet (having taken a break at the park I got water from) stopped by briefly, and based on a water report from Dennis, decided to go a little further on to a campsite a few miles short of the Maryland border in preparation for his attempt at the Four State Challenge. Another hiker was with him, and another followed a short time after. Later, Cody and Rita arrived and set up camp.

Dennis, Cody, Rita, and I had a rather enjoyable conversation around a rather smoky fire in one of the fire pits, staying up until after ten pm (well past hiker midnight!) chatting. 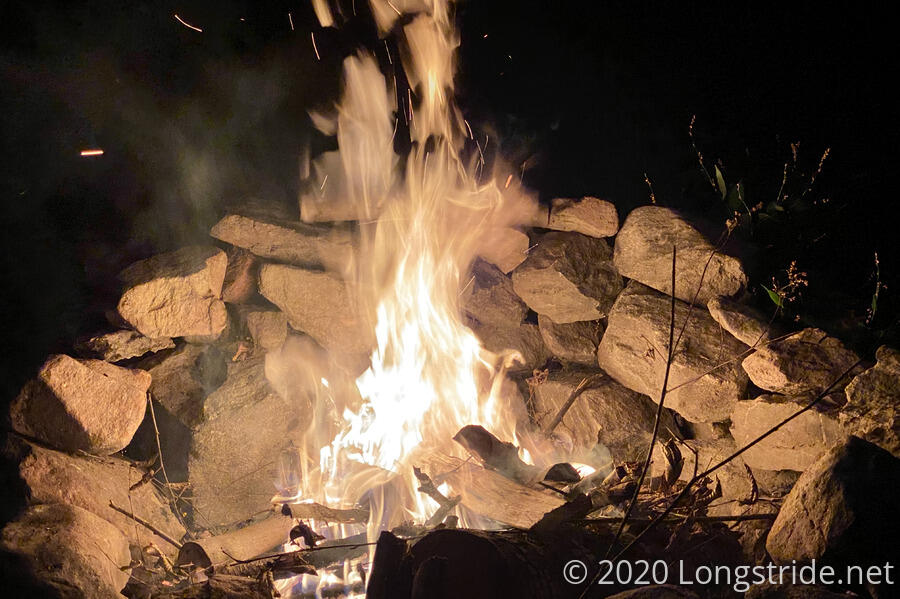 Tomorrow: I return to Maryland, the last major stretch to close my loop back to Harpers Ferry.