Although the weather forecast called for rain, by morning, the risk of rain was gone and the forecast was for sunny skies. Perfect for a hike. After a brief rocky section, and with a few exceptions later on, the whole day had great, level terrain, and I was able to move quite quickly.

Today, at 11:45 am, on my 89th day on the trail, after 1094.55 miles, I reached the halfway point on the trail. After taking some pictures, I celebrated by having lunch, and began to reconsider my decision not to attempt the "half gallon challenge". 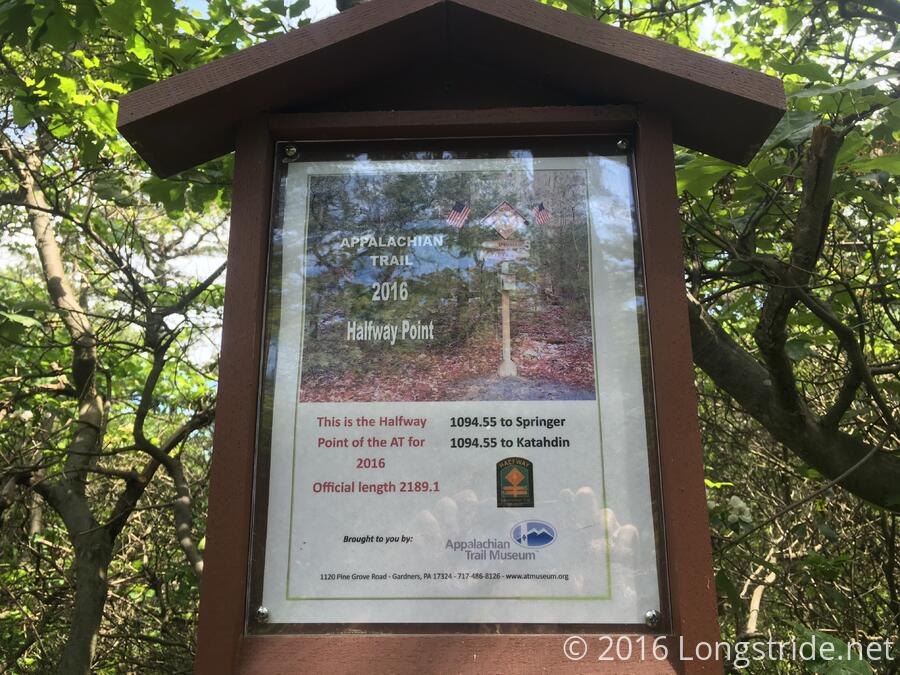 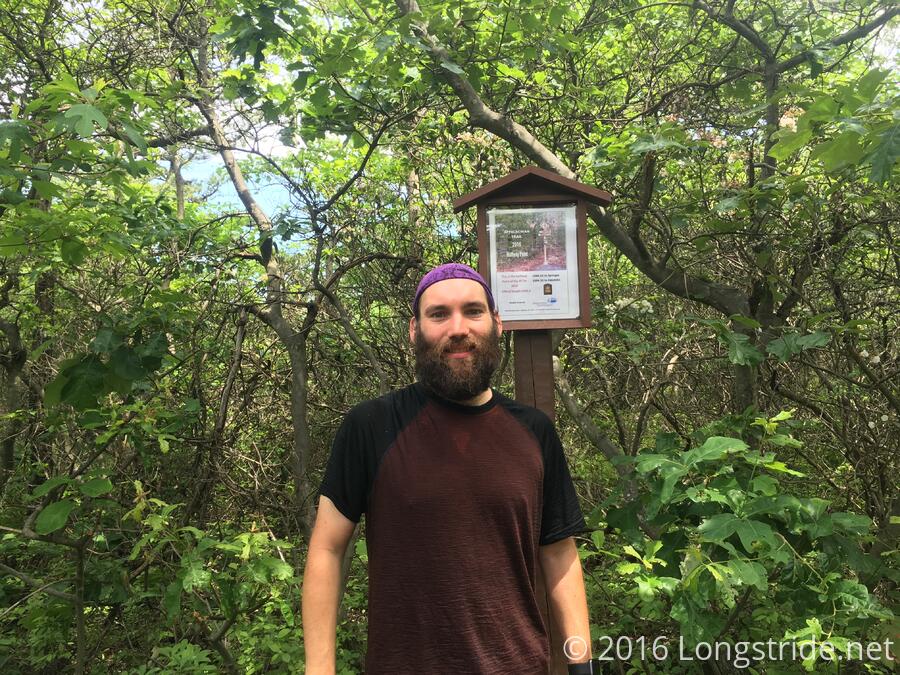 Around 2:30, I arrived at my destination, the general store at the Pine Grove Furnace State Park (incidentally, passing 1100 miles on the way into the park; but after halfway, that hardly seems important), and "home of the half gallon challenge". (Actually, my real destination was the Ironmasters Mansion Hostel about 100 yards earlier, but they don't open until 5.) The park is the former location of an ironworks; the hostel, in the mansion used by its owners.

The half gallon challenge is, simply, can you eat half a gallon of ice cream in one sitting? In a celebratory mood from completing half my thru-hike, I decided to find out the answer to that question.

The challenge has two rounds, because ice cream is no longer sold in half gallon containers. Instead, you start with a 1.5 quart container (I chose Black Cherry), and once you're done eating that, they give you a cup with a pint of ice cream in it (raspberry, for me). If you succeed, you get a tiny wooden ice cream spoon with commemorative text stamped on.

I managed to finish the first quart and a half, but when it came to the second round, I just couldn't do it. By that point, I was full and even looking at ice cream was unappealing. (I think I could probably have done it had I had all the ice cream at once, and didn't have to stop to go back into the store for more.) I ate a spoonful of two of the raspberry, before donating it to hiker Hawaii, who paired it with 1.5 quarts of Neapolitan to complete the challenge.

Full, and with the hostel now open, I gathered my things and walked back up the hill to the Ironmasters Mansion, where I checked in and, after a short wait, got a shower and did laundry. (had to sit around in my rain gear since I was washing both sets of clothes, but fortunately, it wasn't too hot, and the mansion had air conditioning retrofitted.)

The hostel has the entirely sensible rule of not allowing trekking poles in past the front room (they must be kept either outside, or in the hearth). I assumed this was because poles could easily scratch or poke holes in the floor, but actually, it's because the innkeeper once walked into the men's dorm room to find people jousting with their poles from the bunks.

While I was eating dinner (a fantastic pulled pork sandwich, which between that and a pizza, seemed a much more sensible choice after all the ice cream), word came in of a new record time for the "gallon challenge".

For twelve years, a 48 minute record stood for eating an entire gallon of ice cream (that's about as long as it took me to eat my first quart and a half), until it was cut down to 28 minutes by another hiker four days ago. Today, a third hiker bested that time, bringing the time to eat a gallon of ice cream down to 24.5 minutes, just over half of the record from 12 years ago.

I'm unclear on which is the more amazing feat: a gallon of ice cream in 24 minutes, or hiking 50 miles in a day. I do know that I won't be doing either of those two things, ever. (I'm not completely insane.)