With the temperature above freezing, the landscape today looked much different than what the mountain provided two Saturdays ago. Some very nice weather last week and rain over the weekend assisted in melting the snow that previously covered the mountain, leaving a trail largely clear of the signs of winter.

With a warning from the park ranger that there had been reports of ice at higher elevations on the mountain, eighteen of us (the largest group I’ve hiked with so far) started out from the Catoctin Mountain Park’s visitor center, hiking west along the Falls Nature Trail to begin a clockwise loop around the national park. At the end of the nature trail, before turning north to continue our loop, we took a brief jaunt south, into Cunningham Falls State Park, to observe the waterfall.

The ice that had coated the waterfall and streams two Saturdays ago had completely melted, and the water level had dropped a bit, so it was not quite as interesting a scene as it was previously. (And, as we did not climb off the boardwalk to join the boardwalk leading from the Cliff Trail, we didn’t have a particularly great view of the falls, either.)

Returning to the Catoctin Mountain Park, the trail climbed a steep hill leading to a view from Hog Rock. On our way, the remnants of the snow revealed themselves, with occasional icy patches along the ground, and a thin sheet of ice covering many fallen logs.

Shortly past Hog Rock was the high point for the day, and the trail brought us two more scenic overlooks: a “Blue Ridge Summit Overlook”, and, after a short dip and climb, a view of the nearby town of Thurmont, MD. At the Thurmont Vista, we took a short lunch break, a bit more than halfway into the day’s hike.

The temperature cooled down a bit during the climb up to the overlook. While this would be expected to an extent from the elevation gain, it was colder than just the climb would indicate. The ice along the trail that had not yet completely melted was probably assisting in cooling the air near the trail to a near-freezing temperature.

Continuing from the overlook, the trail continued to gradually climb the mountain before cresting and beginning our descent back down to the visitor center. Along the way, it passed by Wolf Rock.

Wolf Rock is a large rock that looks rather much like a dog, accessible by scrambling along a rock face with deep crevices. While Wolf Rock itself is accessible (as evidenced by the graffiti on its “ear”), I stopped a bit short, not wanting to delay too long and hold up the rest of the group. 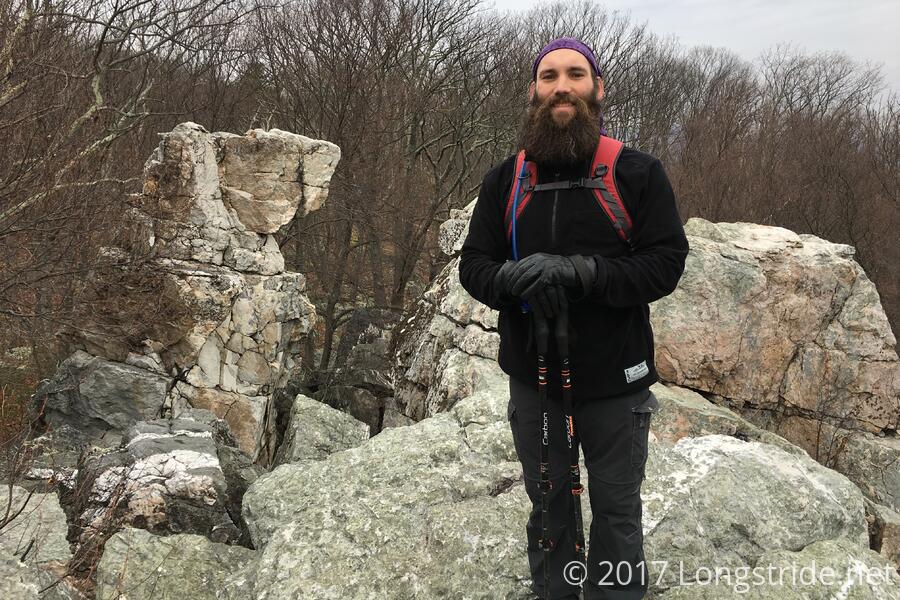 Further on, the trail brought us to Chimney Rock, another rock formation requiring jumping over a few-foot-wide gap to reach the “chimney” and a nice panoramic view of the area.

From there, the trail continued downhill, and returned to the park’s visitor center via the same trail I followed last time, coming from Cat Rock in Cunningham Falls State Park. The packed snow melted away, this section was considerably rockier that it was before, no longer having the snow to fill in the gaps between rocks.

After some brief ups and downs as the trail weaved to and fro, the trail brought us to our final waypoint: the parking lot where today’s hike began.

Next up: a trail-scouting hike in Patapsco Valley State Park.