Today, I joined the Potomac Appalachian Trail Club (PATC) for a hike in Timber Hollow, in Shenandoah National Park. This hike, the “Len Wheat Bushwhack Series #3”, was the first hike I’ve done that was largely off-trail: a bushwhack. This hike’s goal was to visit some of the ruins of abandoned houses in Shenandoah, from before Shenandoah was a national park, and it was as great as hike as it was difficult.

The day started off dreary, foggy, and overcast. About a dozen of us met at the Vienna Metro station, piled into two cars, and headed off on the nearly two-hour drive to the Timber Hollow Overlook.

After we entered Shenandoah at Thornton Gap, though, we began to climb above the clouds, and the day took on a new light. Now at higher elevation, the sun was shining brightly above us, and the cloud we just drove through filled the mountain valleys to the east like a great river, with several mountain peaks poking through as islands. 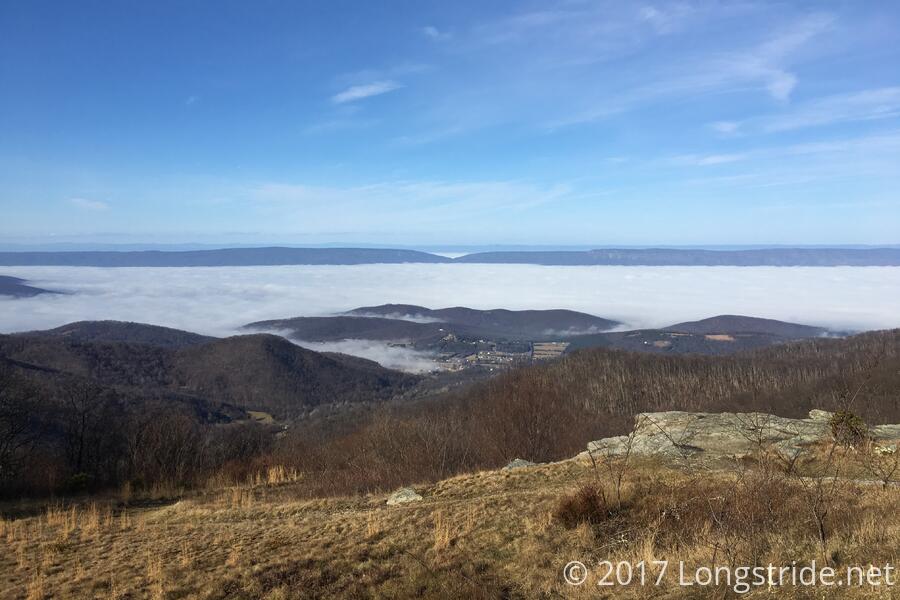 Clouds in the Valley

After gathering everyone from the two cars that drove from Vienna, and the others that went to the overlook directly, there were 22 hikers in all. We began our hike today with a short jaunt north on the Appalachian Trail, going just over a tenth of a mile before turning off the Trail, leading west, down the mountain, following a deer trail. It would be another six hours before we returned to a proper trail.

This hike was a bushwhack, which meant, we were not following a maintained trail. Instead, for most of the day, we were following what remained of roads that existed before Shenandoah was a park.

We stopped a short distance downhill, observing the remains of an old tire slowly decomposing in the dirt. Our hike leader speculated this was the remains of a flat tire from a Civilian Conservation Corps work crew that was building Skyline Drive, and that they had chucked their tire over the side of the mountain rather than haul it out.

We continued down the road. Calling what we were following here a “road” is somewhat charitable. If you squinted just right, you could tell that, maybe, once upon a time, there used to be a path of some sort, and you could follow it if you didn’t think too hard about it. (Though, part of that was that the old road followed the path of least resistance down the mountain, so it wasn’t so much a path now, as a vague and undefined funnel.)

Being unmaintained for decades, the forest has started to reclaim the land the roads used to follow, so now, the ground is no longer level, with rocks and fallen trees jutting every which way, and live trees and brambles growing in and across the path. Leaves covered the ground, sometimes a foot or two thick, and overall, it was a mess to walk through.

A bit further down, we stopped to allow everyone to catch up, and our hike’s leader talked a bit about the history of Shenandoah National Park, giving everyone a chance to rest before moving on.

After descending about 700 feet down the mountain, we took a turn to the north, briefly stopping at the stump of a chestnut tree for a nature lesson, before continuing on to the ruins of the first home site of our hike. Very little remained at this first site. Near a spring, you could just barely make out the footprint of a house long since torn down, a few rocks marking its boundary. Our hike leader continued discussing the history of Shenandoah, and what life must have been like for those living in the the area that would become part of the park. The depth of his knowledge was quite clear, through his difficulty in staying on-point.

After a time, we returned to the “road” and continued to make our way down the mountain. After a bit further downhill, we stopped to allow everyone in the group to catch up, at the supposed site of the murder of a long-ago moonshine bootlegger (also from before Shenandoah was a park).

After descending another 600 feet, we stopped for lunch at a second homesite, which was considerably more obvious: the lower portion of a chimney was still standing, as well as an iron ring that may have once been part of a wagon wheel. 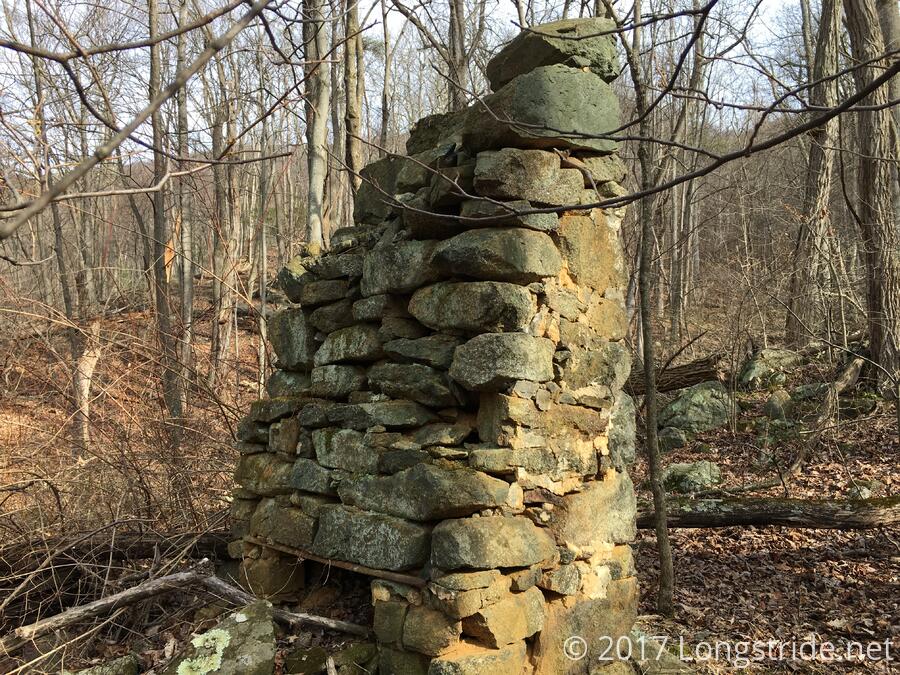 Continuing down the mountain, we turned onto the considerably better defined remains of what used to be the Timber Hollow Road. We followed this road nearly to the edge of the park boundary, crossing over a stream and inspecting several different home sites, including a few where the building (whatever it was) was partially underground, built into the side of a hill. 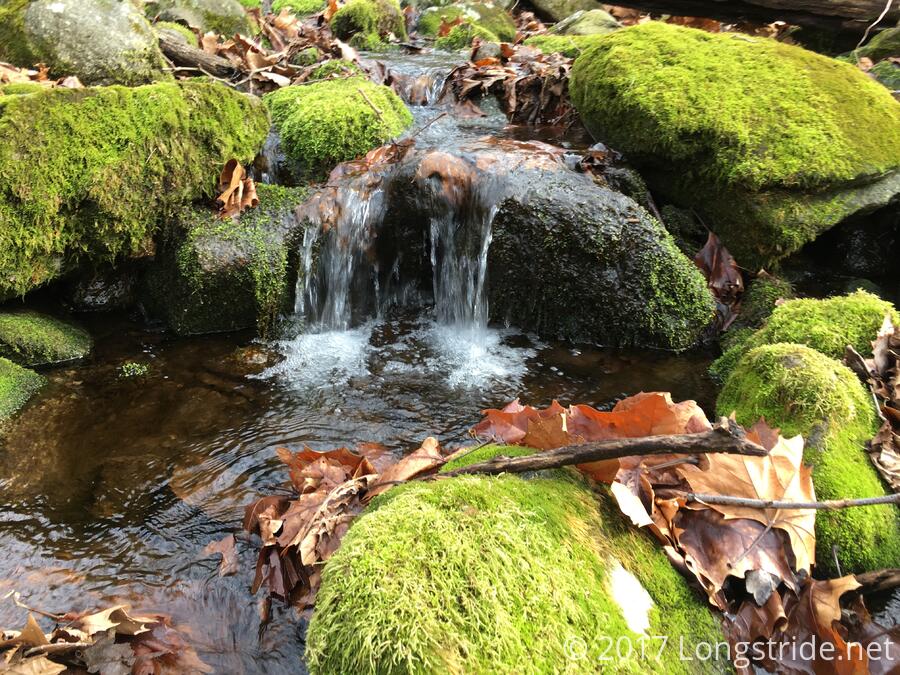 By the time we reached the low point of our hike, we had descended over 1500 feet, with a total elevation loss of almost 2,000 feet, with just two miles of hiking.

Rather than simply retracing our steps back up the mountain, we instead opted to take a longer path back, heading somewhat southeast, loosely following the stream we crossed until we reached a waterfall. Wedged in between two near-vertical rock faces, the waterfall was a great addition to the hike. It was definitely worth the detour. 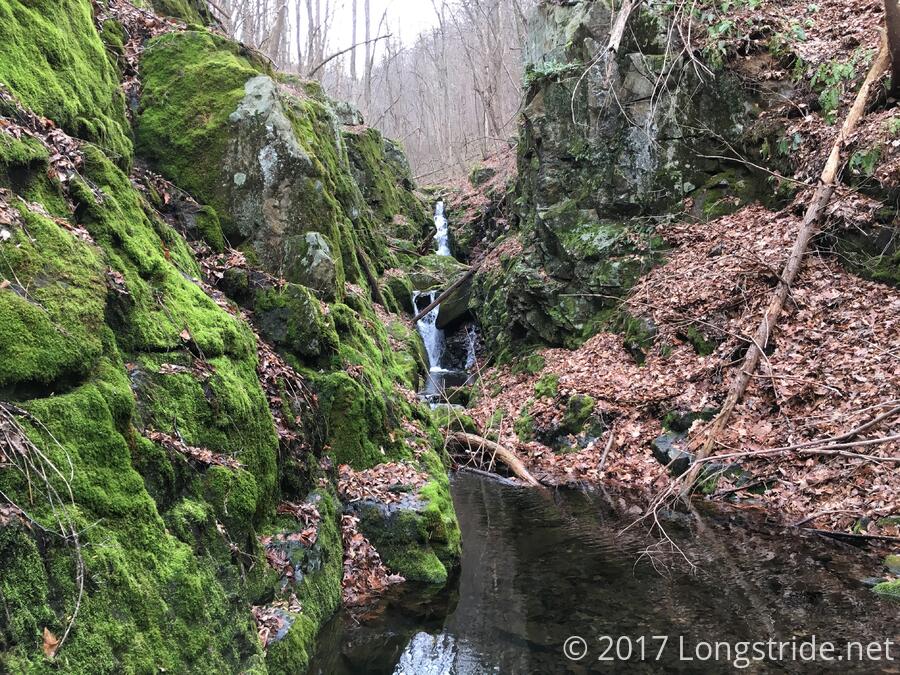 We continued a our long, slow climb up the mountain. While this uphill was not quite as steep as our descent, it was very slow, partially from the difficulty of the terrain, the significant quantity of leaves and downed trees to navigate around, and our large group. We stopped several times to allow everyone to catch up, and each break was accompanied by a short history or nature lesson from our hike leader. Eventually, after a long, slow climb uphill, we returned to the Appalachian Trail at Hawksbill Gap, a little more than six hours after we started — averaging just 3/4 of a mile per hour.

However, now that we were back on the AT, we had a clear, well-maintained trail back to the Timber Hollow Overlook, and we were able to hike that 1.4 miles fairly quickly, making it back to our cars just before sunset.

The clouds that had covered the valley to the west had cleared, leaving just a thin haze in the distance, near the George Washington National Forest.

As we left the park, we found that the clouds on the east side of the mountains were still there, enveloping us in fog as we winded down the mountain for our drive home.

As difficult as this hike was, it would be even harder (nay, even more dangerous) to do in the spring or summer when trees and brambles are growing. At a minimum, there’d be more leaves and more overgrowth. There’d also be more ticks (several of us, including me, found ticks on our clothing during the hike), and a high probability of snakes (which we did not encounter). Had it been wetter, we would have had to contend with slick, slippery leaves, rather than dry leaves. As it was, my legs were constantly being poked at by thorny briars, and I occasionally got whacked in the face by branches pushed aside by the hiker in front of me.

Still, though, while difficult and strenuous, this was a great, rewarding hike, and I look forward to doing similar hikes in the future.