I woke up around 5:30, and unable to get back to sleep, I just got started with my day, and left camp at 6:45, a record for me. (Also a bit of a necessity, since I was going almost 23 miles today.) Before leaving, I left a message for Beast in the shelter log, in case he was just somewhere behind on the trail and caught up eventually.

Once I reached the top of the mountain, I got reception, and text messages came in from Beast and his dad, indicating that Beast had to get off the trail due to extremely serious dehydration, and something involving a bear. Clarification would not come until afternoon, when I could actually talk to Beast on the phone.

While I was contemplating Beast’s troubles involving bears, I saw a bear in front of me on the trail. I made some noise and banged my poles together, again, and the bear quickly wandered off the trail.

My first stop for the day was the Elkwallow Wayside, the last wayside in Shenandoah going north, for a second breakfast (and beer!) from their grill. It was pretty good, and provided me with a lot more energy for getting through today’s long slog through the northern reaches of Shenandoah. I also bought a botle of soda and Gatorade to provide extra energy later in the day. Right as I got to the side trail to the wayside, I ran into two PATC trail maintainers with power tools to cut up some trees that had fallen on the trail a bit south from there. While there, a butterfly landed on my pack. 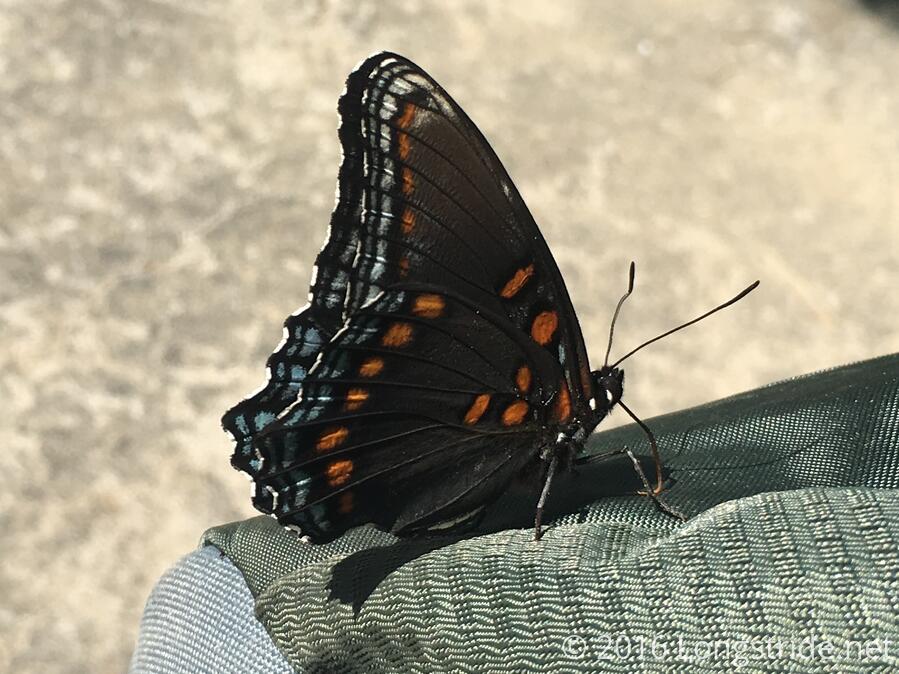 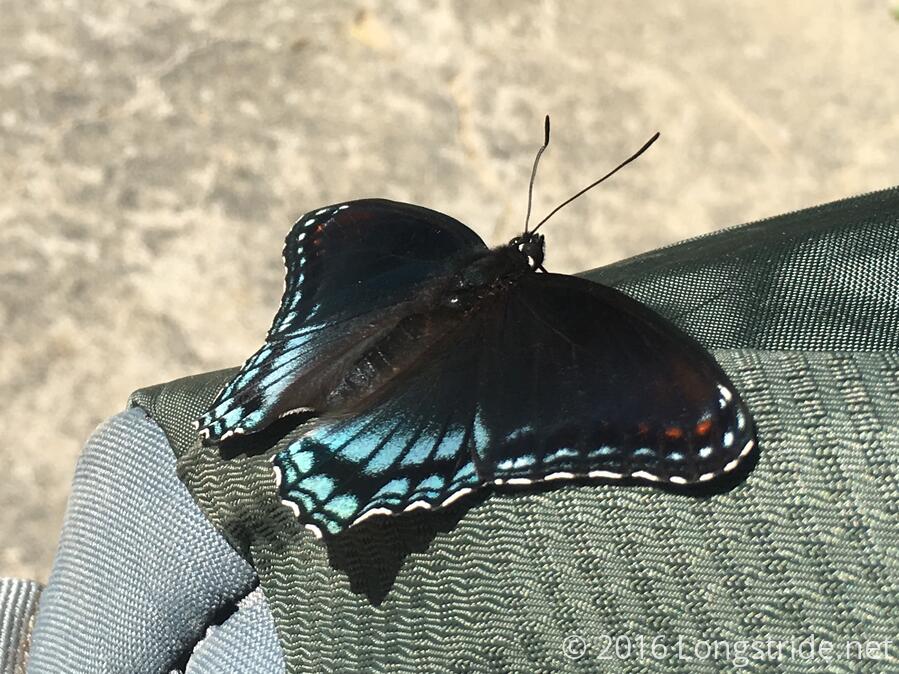 Once back on the trail, and in a bit of a hurry (23 miles does take awhile to hike), the landscape of trees passed by in a blur, and I don’t actually remember much of it. I stopped at the Gravel Spring Hut for a lunch break and clothes drying, and then continued on.

At a particularly scenic rock outcropping just off the trail, I took an early break to call Beast and figure out what happened to him. His endurance sapped a bit from being off the trail for almost a week, Beast couldn’t keep up with the mileage I was doing, and also found himself to be approaching dehydration. He made the decision to stop at Byrd’s Nest #3 Hut for the day.

As I mentioned yesterday, at Byrd’s Nest #3 Hut, I saw a bear. Beast, when he approached the shelter a bit after I did, also encountered a bear on the trail (presumably the same one I did), and two cubs as well, coming down a hill. Seeing a potentially bad situation emerging, he moved faster to try and keep from getting between the bear and the two cubs, but wound up being too fast, going faster down the trail than the cubs were going down the hill, and accidentally got stuck between them.

His only option was to go up the hill, towards an overlook and away from the bears, though this took him off the trail. He moved parallel to the trail for a bit, staying clear of the bears, and was able to get back onto the trail after a short while, and kept moving away as quickly as he could to put as much distance between him and the bears as possible.

But, in his adrenaline-fuelled haste to escape the bears, he forgot/couldn’t/didn’t drink any water, and went from being on the verge of dehydration, to actually being severely dehydrated. He made it to the parking area at Thornton Gap a few miles past the hut, where he got a ride to a hotel in Luray (which is why no one saw him on the trail). During the ride to the hotel, he was not doing well (occasionally blacking out), and he was doing significantly less well in the hotel lobby, to the point where the hotel attendants called an ambulance.

One IV later, Beast was no longer suffering organ failure (yes, he was that dehydrated), and a doctor confirmed that he was only dehydrated (electrolyte levels and everything else was fine; he just didn’t have enough water). The positive is, Beast recognized when he needed to stop, and it was only the bad luck of the bear encounter that got in the way of him stopping. So he can, and will, continue his thru-hike, but he’ll have to do it at a slower pace until he can regain his trail legs.

We’re optimistic that’ll be soon, and the tentative plan is for him to keep going from where he left off (so that he doesn’t create yet another hole in his thru-hike he has to make up), and depending on how he’s feeling and how far he is able to go, jump up to Harpers Ferry to visit with my friends and family that come into town on Saturday.

I continued along the trail, at some point coming upon a deer and fawn on the trail. The fawn took off before I could attempt to shoo them away; it's mother quickly followed.

Around 5:45, somewhat ahead of schedule, I arrived at the Terrapin Station Hostel, near Front Royal and off a side trail that diverges from the AT just before the AT leaves Shenandoah.

While everyone else who was staying went off to do a resupply run in town, I got a shower and did laundry. (I would have liked to go on the resupply run that night, but didn't because the van was full. Frankly, though, I wasn't really that interested in going out after eleven hours of hiking until after I had a shower and food.) A scale showed I did not appear to have lost any weight from the last time I weighed myself, which was somewhat surprising, but as long as I'm turning fat into muscle, I'll take it.

I had two pizzas (small, only 350 calories each), but after two pizzas, decided they were taking far too long to cook and eat, opened a half gallon tub of ice cream and ate half of it.

Later, after everyone returned, I played a few rounds of Hearts with Romeo, Big Stick, and the hostel's owner, Mike, before retiring to bed.

Tomorrow: A 17 mile SOBO slackpack, to set up for two 20 mile days into Harpers Ferry.