Today is my last full day on the AT before reaching the Tuscarora Trail. It also turned out to be a rather long day.

I set my alarm for 6:30 last night, knowing that I had an aggressive 18.6 mile day planned. If I would have any chance of doing that and making it to my destination before sunset, I’d need to start at 8 am. Fortunately, I woke up a bit before my alarm went off, so I did not disturb my shelter-mate.

The clouds did not lift at all overnight, and it was still foggy out this morning. We were not looking forward to another day of rain, but, we didn’t have much choice in the matter.

My shirt, underwear; and liner socks dried out overnight, thanks to sleeping with them on, but my pants, socks, and boots especially were no drier. If my boots had been dry, I’d have probably gotten out a dry pair of socks, but with wet boots, I’d just immediately have another set of wet socks. From experience, I knew my feet were not going to like me by the end of the day.

In a nice touch, the shelter’s privy had a description of why the shelter was named as it was. (In short, the Dentons were long-time members of both the Roanoke Appalachian Trail Club (RATC) and the Potomac ATC (PATC), and had quite significant contributions to the AT, as well as the “Big Blue” Trail — the southern portion of the Tuscarora.

I started hiking just before 8 am, successful in meeting an “early” start deadline for once. In the fog, the forest was quite gloomy, the trail and foliage wet and soggy. 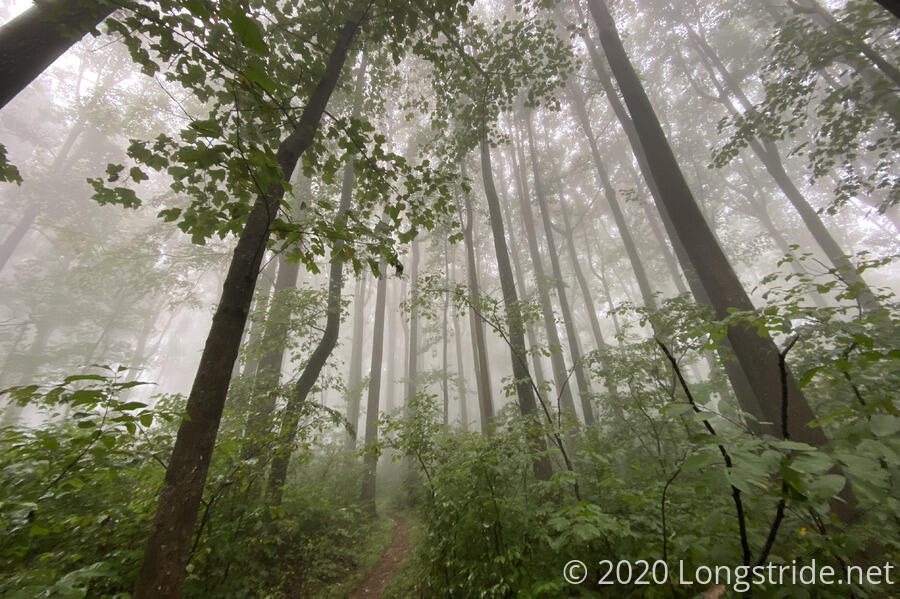 Captain America left several minutes before me; I caught up with him after five or ten minutes. Turns out, the spiders on the trail were out in force, and he was slowed somewhat knocking them down or pickings them off his face. He got ahead of me again, and then I later passed him while he was taking a break.

After a relatively gentle climb for a few miles, the trail took a very nice, gradual downhill, and I made great time. This was one of the few sections of trail I clearly remembered from when I was here in 2016. On the way down, the sun tried a couple of times to come out from behind the clouds, but it was not successful.

After crossing US-522, and then a bridge over a small creek, the tail began nearly 12 miles of (sometimes steep) uphill, with occasional reprieves. With the humidity, it was a slog. 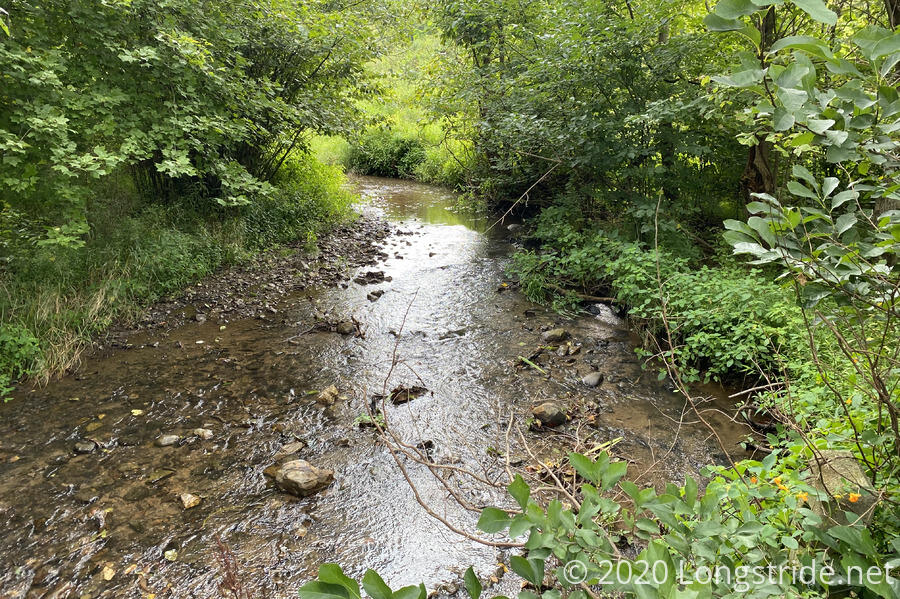 With the exception of the stretch of trail to and away from 522, with a fence on one side and private homes on the other, I didn’t remember any of this section of trail at all. I was a little surprised by this, but I think it just further proves my feeling that long days are bad because you can’t remember much of them.

A bit further into the woods, past a gravel road and creek, I ran into a PATC trail maintainer pruning some plants near the trail. He was also there to meet with someone from the ATC about putting a bridge over the creek. (I didn’t ask why, but I suspect that it’s either or both of, the creek often floods and it hard to pass without getting wet; and they don’t want people stomping through the creek, disturbing the ecosystem.) He’d also done work on some of the recent relocations on the Tuscarora, so at some point in the next week or so, I’ll get to see his work.

The steepest climb of the day brought me to the Tom Floyd Shelter. (Floyd, like Denton, was also instrumental in the construction of the Tuscarora.)

Drenched in sweat, I took off my clothes and wrung a surprising amount of water out of them. The climb here was exhausting, even though it was only 8.1 miles, and I briefly considered stopping here, especially since my next opportunity to stop was in another 10.5 miles. (This would make for an 18.6 mile day, my longest in almost two years!) I had more than enough food to stop here. But, the clouds parted slightly to reveal a blue sky, as if that would somehow apologize for the rain and fog. More importantly, it was only noon, and I wasn’t prepared to sit around all day and do nothing. Plus, it looked like someone had put a bag of trash up on the bear pole, so I wasn’t sure I should stay.

So after spending an hour drying off, I put my wet clothes back on, and headed out. With a light breeze blowing and a little sun shining, it was actually starting to feel dryer.

About half an hour later, just after 1, I finished climbing a large rock wall that marked the boundary to Shenandoah National Park. After that, the next two miles of trail were almost flat, and fairly wide (part of it was also a horse trail, one of the few places on the AT to allow that), and I made excellent time on that stretch, to Compton Gap. With the wider trail and a little bit of sunlight starting to peek through the clouds, my shoes started to dry out a little.

The trail climbed up and over Compton Mountain, but I opted not to look for a view; though it was still somewhat early, I had a long way to go and most of the day was still uphill. I took my second break of the day at a trail junction at after the downhill on the south side of Compton. Another hiker, with a fishing pole, hiked past, coming from the trailhead from Skyline Drive and heading south on the AT. While I was there, two butterflies flitted about, either dancing with or fighting each other.

It didn’t take long for the clouds to return. A few raindrops fell, and then a light rain started to fall once I reached Skyline Drive again, and the direction the trail went was not immediately visible.

The last climb up North and South Marshall Mountains were uneventful, though slow. The drizzle stopped, but the clouds did not part until after I was descending South Marshall, preventing seeing the view from the summit of either mountain. On the way down, though, a view to the west opened up, and once again I could see Massanutten, which I will start crossing in two days.

Shortly before 6, I reached Gravel Springs Hut. A nice shelter off a steep side-trail form the AT, it had one of the best springs I’ve seen of any shelter. Cold, clear water bubbled out of a depression and flowed across a rock-lined ditch in the trail. It was great for rinsing off the day’s accumulated sweat.

Just before I got to the shelter, I saw another hiker get there; it turned out to be the fisherman I saw while on my last break. Also there was Captain America, and another AT southbounder.

I chatted with him and Captain America for a few minutes, during which time he pointed out a large spider web hanging hanging from the shelter’s roof overhang to the middle of the outside row of the picnic table; he asked that we let it be, because apparently the spider got “really angry” whenever anyone got too close to the web.

It was at that point I brought up the elephant in the room: the tent (I assumed correctly) he had set up in the shelter. This surprised me; I had figured a thru-hiker would have known better than to consume nearly all the floor space for themselves.

He trotted out a number of lame excuses (like, “I’ve been here since noon”, “it’s never been a problem before”; “you can just use the bunks”; and three different variants of “coronavirus”). The coronavirus excuse was especially galling, because the tent body wasn’t going to protect him at all, and he had just got done offering me the space next to him so I could sit down without disturbing the spider web. So his excuses felt like selfishness.

After a long day, I wasn’t going to let another hiker take up four persons worth of space in a shelter. I was not inclined to inconvenience myself on his behalf.

I shamed his tent out of the shelter (and him with it since he refused to share the shelter without it). He moved to one of the tentsites located just downhill, well further than six(ty) feet away. In the process, he knocked the spider web down.

Captain America moved off of one of the bunks (which he thought were more for gear storage than actual sleeping space, given how cramped they were) and onto the shelter floor, and I claimed the other side of the shelter.

With the shelter vacated of tents, Captain America and I were able to get a better look at the inside of the shelter. We knew there were spiders, which also had a giant mess of a web in the rafters, and mice (we’d seen one even before the shelter was clear; later, we were able to see three at once). I discovered trash — and ants — on the bunk on the other side. And, Captain America found a birds nest (apparently vacant). “This shelter has everything,” I declared.

While I cooked dinner, the clouds cleared a bit, and the sun came out briefly. Towards sunset, an orange glow was cast on everything.

Tomorrow is my last day in Shenandoah, and on the AT until I finish the Tuscarora. With a very long day today, my feet will be very disappointed in me if I have an aggressive day again tomorrow. So, no alarm, and a roughly 14 mile hike to camp on the Shenandoah River!