Today was a good day, even if it didn’t quite go according to plan.

I woke up shortly before sunrise, a bit colder than I expected it to be. Usually, this makes it somewhat hard to get out of my sleeping bag, except that I was cold, so that was the bit of motivation I needed to get going this morning.

I was reasonably efficient, and managed to pack everything up in about an hour and a half. My departure was delayed slightly when three people from the Virginia Happy Trails Running Club arrived at the shelter. They were supporting a number of trail runners on the Massanutten Trail today. On the off chance they might know, I asked one of them if they knew of campsites on the Tuscarora around my goal for the day (Little Passage Creek) or along the ridge after that. They thought there were plenty at the creek, and the ridge was very rocky (so, probably not by implication), but admitted that it was all a bit of a blur when they ran through. They even offered food (he was cooking for his wife, who was running the trail today) if I were able to make it to where they were camping this evening; I said I’d try and make it there.

Shortly after leaving the shelter, I hiked past another impressive specimen of a spider web. Apart from this one, I saw (or hiked into) into very few spider webs today, which was a happy departure from the recent norm. 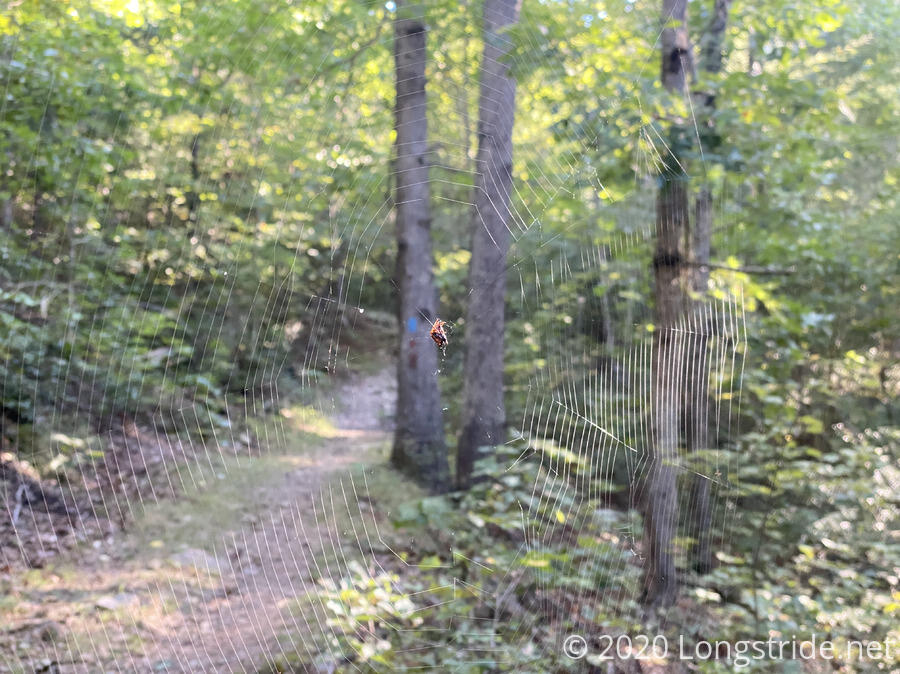 After about a mile and change, I reached what was easily the best view of the day, east to “The Point”, an especially prominent meander in the South Fork Shenandoah River. I took a brief rest there. 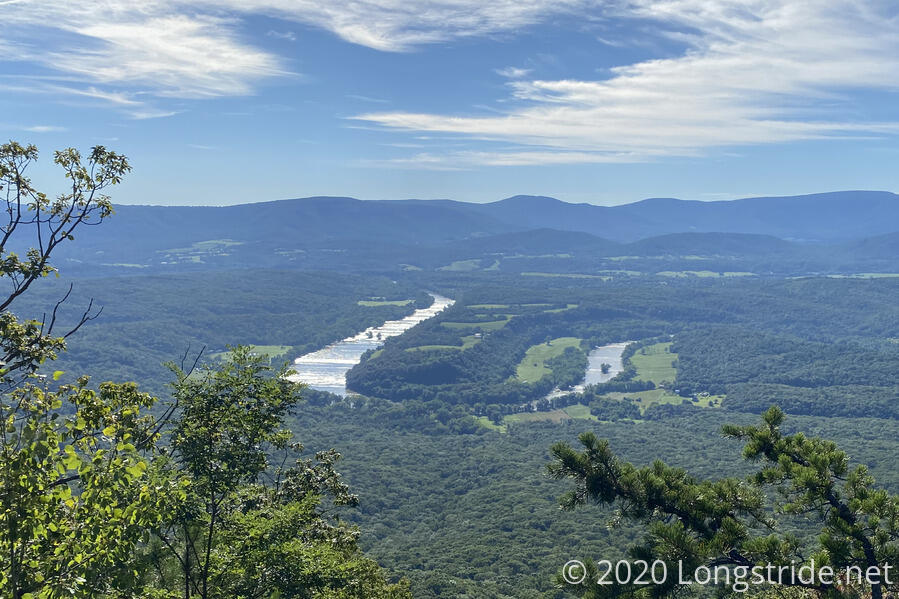 The Point — An especially prominent oxbow meander in the South Fork Shenandoah River.

There was a great campsite there, as well. As much as I was glad to have stayed at the shelter yesterday, this would have been a great short hike after dinner to finish the day. And, I’d have gotten a good sunrise. (Oh well, maybe next time.)

By that point, I think most of the trail runners had passed; I wasn’t really counting, but I guess there were a dozen or so. I somehow expected more.

After the view, the trail bounced along the ridge for awhile. While it was gaining altitude, I noted the lichen-covered rocks and short trees, mostly pines. It had a distinctly subalpine feeling to it.

Descending the ridge was a little slow, thanks to a bit of overgrowth on the trail. It wasn’t too bad, though, but it would have been a major annoyance had it been wet.

Later, I heard quite a few gunshots to the west; they were of such a number that I had to assume there was a shooting range (or something) somewhere in Massanutten.

At a trail crossing a bit more than five miles from where I started, I stopped for a break.

Although it had warmed up a little since I left the shelter, it was not as hot, and especially not as humid, as it had been. It really was a great day for a hike. Apparently the day-hikers agreed; there were quite a few out today, including the occasional large group.

From the trail junction, the Tuscarora (and Massanutten Trail) continued downhill, and west, to the ruins of the Elizabeth Furnace and the campground now in the area. The furnace was a Civil War-era ironworks, originally built in 1836. Destroyed by Union forces in 1864, it was rebuilt in 1883, and eventually abandoned in 1888. All that remains of the furnace is a stone wall several feet high. (The original building was 33 feet tall.)

After exiting the campground, the trail turned uphill again, and split from the Massanutten Trail, which headed to higher ground towards Signal Knob. The Tuscarora took a parallel path lower on the mountain. (I guess the truism, “when in doubt, the AT always goes up” doesn’t apply for the Tuscarora!)

I stoped for my second break at a small creek just after another nice campsite.

Over the course of the day, I made note of about ten campsites, maybe five of which were really good. It would have been nice to have that information beforehand, since it would have made planning a lot less stressful. Unfortunately, with the exception of the shelter’s and a few campgrounds, the Tuscarora Trail’s guidebooks rarely ever list campsites, making them more suitable for day hike use than for thru-hikers.

I arrived at Little Passage Creek (which was definitely little), and found no campsites in the immediate vicinity. Supposedly there were some along the Massanutten Trail, which crossed the Tuscarora there, but I didn’t particularly want to wander the trail looking for a campsite. I sat down and took off my shoes and pondered my options.

It was nearly 4 pm, so I only had a few options. The safe thing to do would be to get water from the creek, have dinner there, and head down the Massanutten Trail looking for a campsite, which I’d heard from multiple sources were plenty.

My maps showed a spring and campsite at Mudhole Gap, where this morning’s hiker said they’d be. I didn’t want to rely on a trail angel, so with that information, it was an acceptable gamble: if I get there and he’s there, good; if not, I have a fallback plan, and I’m about four miles further down the Tuscarora, which will help greatly for tomorrow.

So I decided on that second option, and headed up the Tuscarora, which, this time, took the high route, up to the western ridge of Massanutten.

I made good time up to the top of the ridge, and along the ridge as well. Although the ridge was mostly rocky, it was largeish rocks that were easy to navigate, and I could keep my pace. It helped also that it was relatively flat. The trail did bounce up and down along the ridge, but never steeply.

There wasn’t much in the way of views. Occasionally, I could catch a glimpse of the Shenandoah Valley to the west, but usually there were too many trees in the way.

Along the ridge, I also passed a hunter, in camo, with a crossbow, out “practicing” on squirrels.

As I speeded down the ridge, the sun continued its descent, and it started to get a little cooler, which helped me speed down the trail. Hoping for trail magic ahead, I felt the distinct feeling that I was borrowing energy from tomorrow.

The trail exited the woods and joined a gravel road, and I sped along, ready to be able to stop hiking for the day.

On the way, I passed a truck with a camper. As I passed them, I wondered if it was them, but I got the feeling it wasn’t, and I didn’t want to intrude on their space “uninvited”.

it occurred to me then that I never asked, and they never said, how I would be able to recognize them. I’ll have to remember that for if something similar happens again.

Further down the trail/road, I passed two guys, filthy, in work overalls, with chainsaws, cutting down a dead three on the side of the road. I assumed they were not supposed to be doing this, as they had no safety gear of any kind. A little further down the road was their truck, a large trailer (for the wood) with three of four kids, one of which had a toy chainsaw. Behind the trailer were two women; I assumed, their wives. I nodded or waved at them all, but said nothing. (Really, what was there to say?)

Shortly after, I passed the spring, a pipe sticking out of the side of the hill with cold, clear water gushing out. I rinsed my face and arms (and forgot to rinse of my legs, which badly needed a rinsing), and collected four liters, all the water my bag could hold.

I also passed two other campers in a pull-out area just off the road. One looked very old. In any case, by this point, it was nearly six, and I was tired and ready to end the day on my terms. I passed them by.

A few minutes later, now over a mile off-trail, I reached a “campsite”, a nice-sized meadow with a few large trees and a few burned-out ex-stumps of trees.

Camping on grass was less than ideal, since I’d wind up with a wet tent tomorrow, but without much choice, I quickly set up and cooked dinner.

As I was unpacking my pack, I found that my headlamp had been turned on while it was stowed; it must have been on for hours, since now the bright light wouldn’t turn on, only two wider (but less bright) lights and the red light.

It was somewhat humid out now that the sun had set, and my tent already had condensation on both sides of the rainfly. I expected a wet tent tomorrow; now I knew it would be a sopping wet mess.

I took a look at the sky for a minute or two (as long as I could stand in the cool evening). It was a clear, night, and the stars were shining brightly. I smiled. Definitely a good way to end a long day.