My first full day on the Tuscarora Trail was short, but it was still a good day.

I woke up to a baker’s dozen of daddy long-legs on top of my tent’s body, beneath the rain fly: two groups of six and a loner. I was happy to have them there, eating whatever bugs they could find, even if it was a bit weird to have how-knows-how-many pairs of eyes staring at me all night.

Leaving the tent flaps open last night worked out well. It didn’t rain further, and even though it fooled overnight, the humidity didn’t increase, so I didn’t wind up with everything wetter than it was last night.

The morning started off very slowly. I knew that for my plan to only put in a short day to work, I would have to not get to my destination too early in the day, so that I wouldn’t be tempted to hike on anyway.

So I took an astonishingly long four hours to eat breakfast, get a little writing in, pack everything up, and leave. Some of the delay was getting my tent’a rain fly and ground tarp to dry out after being rained on yesterday evening. Some of it was intentionally doing stuff in a non-optimal order to delay departure. My campsite was initially shaded by trees, but as the sun rose, I was able to move some of my clothes into the sun to dry out (at least a little).

But the daddy long-legs also turned out to be a nuisance to get rid of. Even after I took off the rain fly, they didn’t want to leave their perches on the tent body. After I shooed them off, I found that two of them had gotten inside the tent, so I had to chase them out. I guess they were “helping”, in their own special way.

On my way out of Low Water Bridge Campground, I made one last stop at the office. I picked up two chocolate bars to substitute for a day’s worth of pop tarts (I had four days of food, but only three breakfasts). I also got a bottle of Gatorade and two bottles of Dr Pepper. With the 3L of water I was already carrying, this was a lot of weight to lug up the mountain. But since I was only going just over four miles today, I was going to enjoy it when I got there.

The trail continued along Panhandle Road, the gravel road the campground is on, and it gradually took me uphill. Shortly after leaving, I caught a glimpse of a deer running in the woods.

Shortly after that, I passed a werewolf mask someone attached to a tree stump. I guess it’s supposed to be a lot more scary at night. 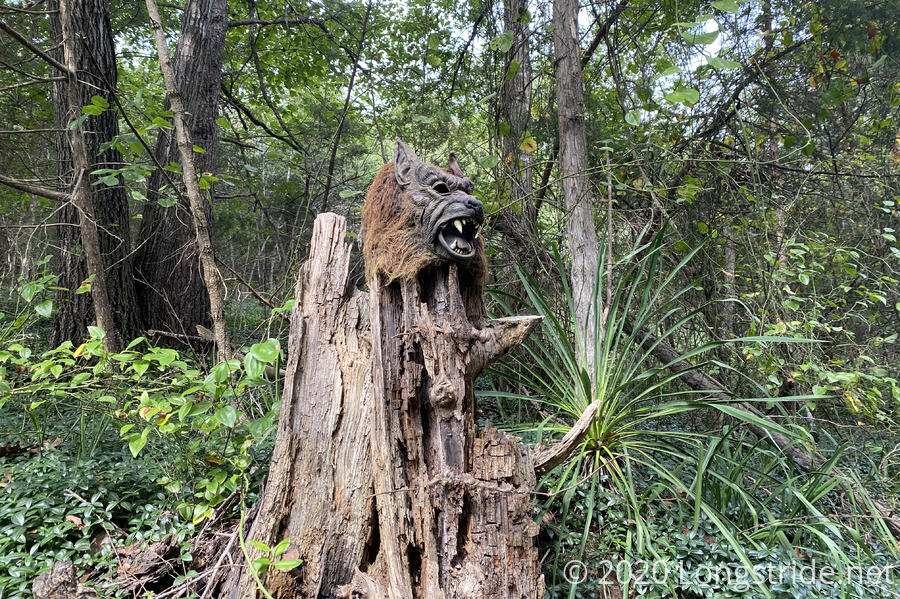 Werewolf Mask — A werewolf mask on a tree trunk aside the road must be intended to scare night-time drivers.

I also caught a view southeast to the Shenandoah River. 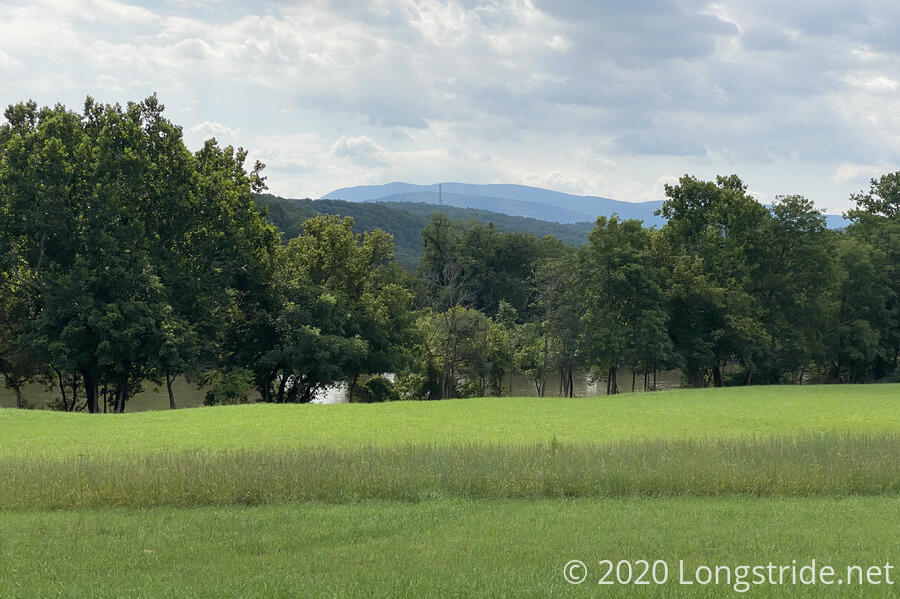 The first mile on the road flew by, but especially as the sun rose higher and the grade started steepening, it became harder to maintain pace, and I had to stop for short breaks frequently.

But, about half an hour after I left, I entered the George Washington National Forest, and got back under tree cover.

Shortly into the forest was a sign for Morgan’s Road, which the trail evidentially followed, at least for a short while:

“Preparing for a possible “last stand” for his beleaguered men in the Revolutionary War, George Washington directed General Daniel Morgan to build a military road to Fort Valley, a natural fortress in these Massanutten Mountains. Traces of Morgan’s Road can be seen here. Fortunately, it was not needed by Washington and his troops.”

Only 45 minutes (and not quite two miles) in, I had to sit down and take a short break. The heat and humidity were really getting to me, and I was slightly regretting leaving so late in the morning. Fortunately, I had some (cold) Gatorade, which helped a bit. While I was stopped, the sun briefly dipped behind a cloud, which helped.

As the trail climbed Massanutten Mountain, views occasionally opened to the east. 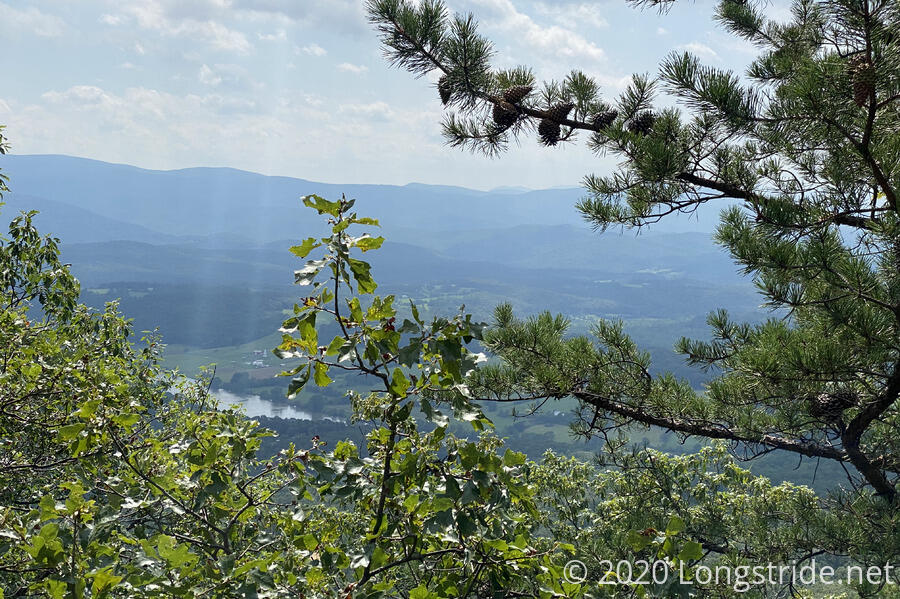 Finally, after several wide switchbacks, the Tuscarora joined with the Massanutten Trail, atop the ridge. It then immediately turned downhill, heading towards a “crease” in the mountain. Meanwhile, the sun hid behind some clouds, making the downhill towards Little Crease Shelter easier. 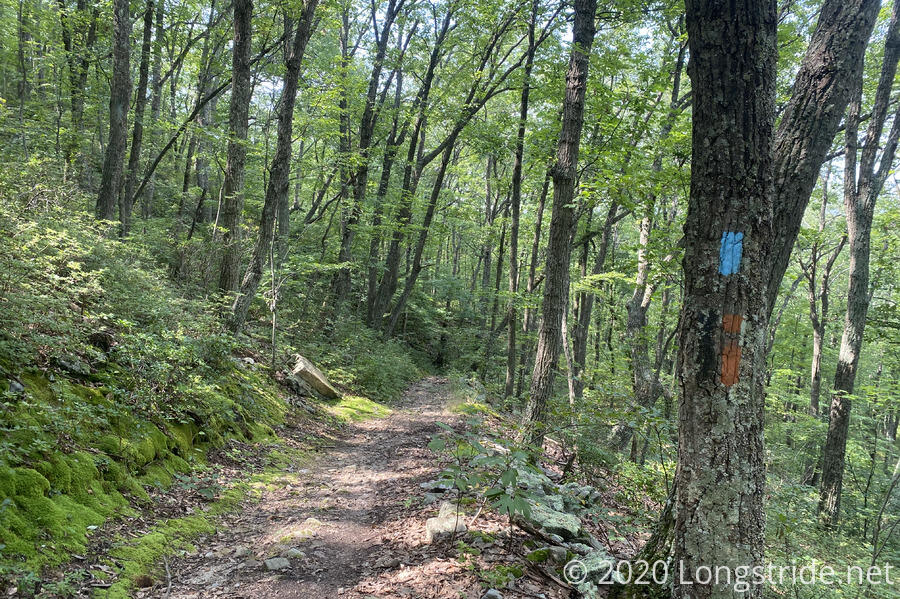 The initial descent was slow, thanks to a somewhat rocky trail (loose rocks that were too large to just step on, and easy to kick around or get in the way). As the trail reached the creek valley for Mill Run, though, it turned back into dirt, and it was much faster to hike.

At 1:15, I arrived at Little Crease Shelter, just across the creek from the trail — it was close enough to see even before I got to the short side trail. Crossing the creek, I almost sunk my whole boot into a muddy pit adjacent to the creek.

As I sat down to rest, the sun started to come back out. Even then, it was noticeably cooler and less humid than it was earlier, even only 100 feet away from a creek. A moderately large shelter, Little Crease Shelter could easily fit eight, and maybe twelve if everyone packed together tightly. A fire pit in front of the shelter stood invitingly, with a container of lighter fluid perched on top of the “stove top”, and large pieces of wood strewn haphazardly around on the ground. Soaked, I was tempted to start a fire this evening just because it would be easy to do. (I didn’t. Changing clothes and drying out helped improve my frame of mind.)

I flipped through the shelter log, one of my favorite pastimes on the AT. Then, it was to see what other hikers were up to. Here, it was just to soak in the trail. The last log entry was two days ago, so it now seemed entirely possible to see someone else on the trail today.

Even though my plan was to stop here, it was still early in the day, and if I ate dinner here, I could easily push another three or six miles to my next known campsites. After finishing my Gatorade and one of the chocolate bars, I was feeling much better and I strongly considered doing that. The clouds and light breeze were making it more tempting. Then it rained for about five minutes, and I decided that was a sign to stay put.

I wasn’t feeling super-hungry, but I wanted to eat a full dinner today, partly to cut down on pack weight, it also to make sure I drank enough water. (If I was going to skip part of my dinner, it’d be the ramen, and soup is mostly water.) I’d decided that I was probably slightly dehydrated, since both of the previous two days, I’d finished all the water I was carrying just after I arrived at camp. (And that was with rationing slightly because I was afraid I’d run out.) So all that in mind, I cooked my macaroni and cheese around 3:30, and waited until 5:30 for the ramen.

Shortly before I cooked the second half of dinner, two hikers came up from the north. They looked around a bit, then decided they’d rather hike back a half a mile to a campsite “closer to the creek”. I was a little surprised, since they literally stepped over the spot where I got water for cooking, but, far be it for me to judge where someone should camp, and it did mean I’d have the shelter to myself. While I’ve had campsites to myself before, this is the first time I’ve had a shelter entirely to myself. (Once on the AT, I had a shelter to myself with others camping at the shelter’s tent spots.) I’d wanted to ask them about campsites on the Tuscarora ahead, but they were hiking the Massanutten Trail (which rings the mountain), and they had not been near my area of my interest.

Bear poles are great for storing food away from bears, but a royal pain to hang from. I had to take my food bags down twice so put stuff in I’d forgotten, and both times it was a chore to get the bags up and take them down. The two problematic factors are the weight of the pole arm to raise and lower bags, and the shape of the hooks. Being taller would probably help offset unnecessarily deep hooks. If poles at other shelters are this problematic, though, I may have to resort to alternate methods in the future.

Just after sunset, I took another look around the shelter to look for signs of mice. There didn’t seem to be any, so I was much relieved. But I did find wasps building a nest in a corner of the shelter’s roof. I moved my sleeping pad a few feet away to be safe(r).

Today was short, but I’m glad it was. I needed the time to relax (and especially let my feet rest up).

Tomorrow: hopefully run into people who can tell me about campsites up ahead. Otherwise, head for Little Passage Creek, about 13 miles ahead, and hope there’s a campsite there. Maybe get a shower at the Elizabeth Furnace Campground among the way.