I didn’t set an alarm for this morning, since yesterday was pretty hard on my feet, but I still needed to get going relatively early in the day. Although the plan for today was a good five miles shorter than yesterday (and with much more downhill), there was also going to be a roadwalk, and I wanted to take it a bit easier on my feet.

I woke up at 7 to find an incredible amount of mouse droppings near my water bottle and sleeping pad. It seemed there had been a party of some sort last night. They also managed to get underneath both my sleeping bag and Captain America’s, as well as a sizable quantity on his pack cover (which was suspended several feet from a mouse hang from the center of the shelter), so they must have been aiming at it from the rafters in frustration that they couldn’t climb down to it.

I left the shelter an hour and a half later, and headed south on the AT for a final 3.6 miles. I had the thought that it seemed almost fitting that this section of the AT (from Harpers Ferry to Matthews Arm, where the Tuscarora begins) starts and ends with uphills, but the northern section (from Darlington Shelter to Harpers Ferry) starts and ends with downhills. There seemed a nice symmetry to that.

After crossing Skyline Drive again and heading uphill for a bit, a view to the west popped up. In it, I could just barely see the Shenandoah River (or, at least, its South Fork). This finally answered yes to a question I’d posed long ago, whether the Shenandoah River was visible from the AT. 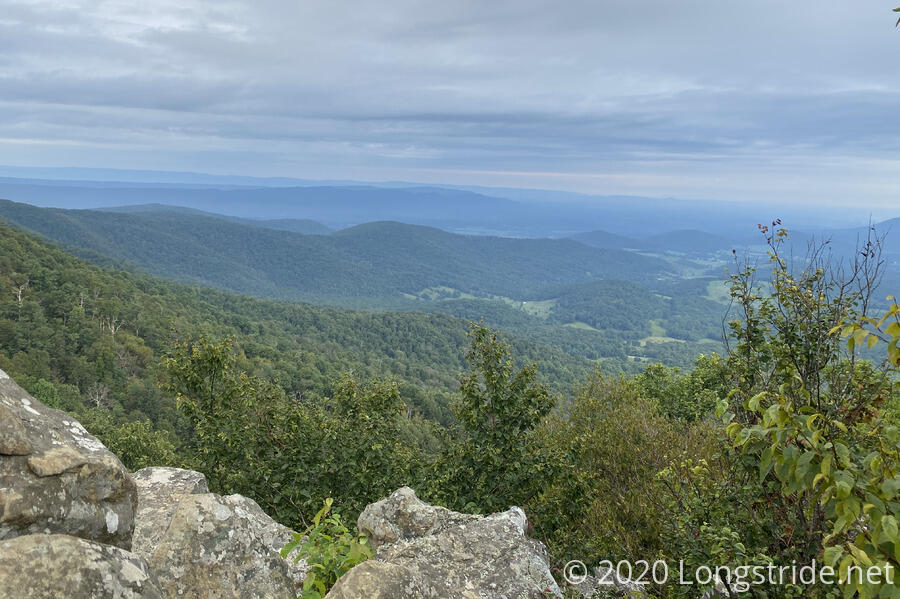 As the trail continued to climb, I remembered a view from when I was exiting Shenandoah last time, on the AT. At the Hogback Overlook, the trail is just above the road and parking area, one of the few (or only, I think) times this happens. When I got there, there were two people who’d just parked their car and were walking the length of the parking area, taking in the view (and taking a short break from the uphill). I watched them for at least a minute (and also saw a couple of cyclists bike past). I don’t think they noticed me.

At 10:22 am, I reached the southern terminus of the Tuscarora, a nondescript trail junction marker pole like any other in Shenandoah. I took a picture of the pole, but forgot to take a picture of me with it! Probably because I was eyeing an open spot next to the trail just ahead, where I’d decided to take a break. 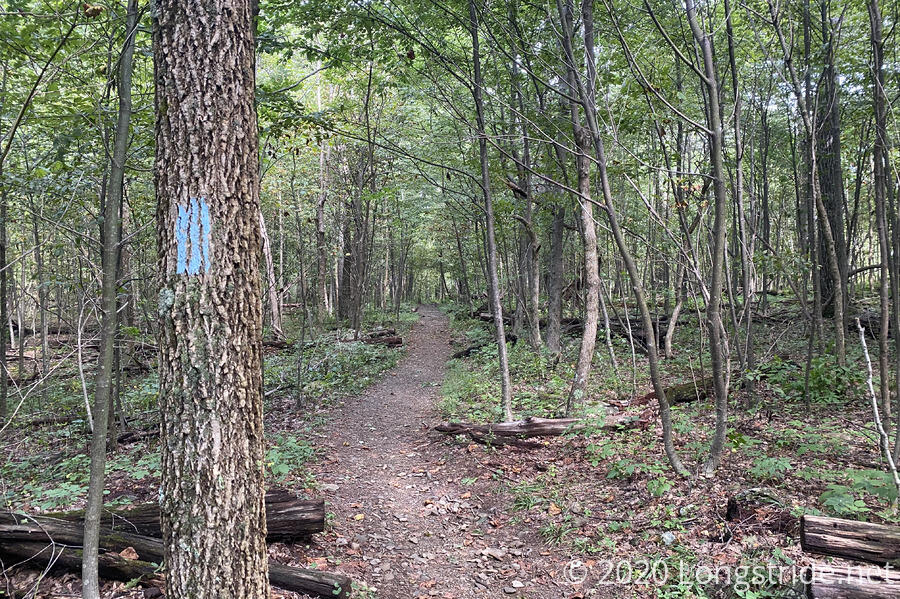 So far this morning, it’s been nice out. Sunny, blue skies, a nice breeze, not too hot, and the humidity might actually be dropping.

From its junction with the AT, the Tuscarora starts off with a downhill. In fact, at 3,400 feet, this is the Tuscarora’s high point. (If only it were all downhill from here!) It also begins a several-day-long generally westward trek, heading across Massanutten Mountain, the Shenandoah Valley, and the Great North Mountain before finally turning northward on the mountain’s western ridge.

Passing the second trail junction to the Matthews Arm Campground, I saw an older woman sitting on a tree stump taking a break. She was staying at the campground, and out for a short hike that didn’t require her to drive to get to. She wasn’t sure exactly what she was going to do, but noted a waterfall just ahead. This was the waterfall on Overall Run. At 90 feet, is the tallest waterfall in Shenandoah.

I stopped for another break at the top of the waterfall. A nice breeze blew, and it was nice and calm. Another hiker, from Florida and doing some hikes in Shenandoah, stopped briefly to get water from Overall Run.

Just a bit further down the trail, there was a view of the falls. It was nice, I guess, but it sure didn’t seem like it was 90 feet. 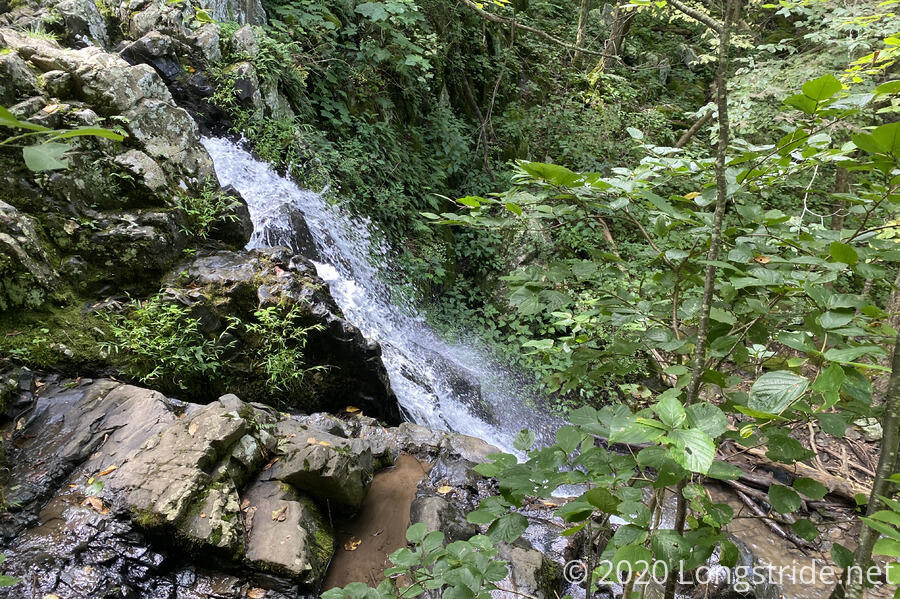 Shortly after the falls, I passed a notice prohibiting camping on the “left” side of the trail for the next half mile. This was on the side with Overall Run; it was hard to tell, but it seemed like a pretty significant drop-off to the creek, and that there wasn’t anywhere to camp. (The right side of the trail was likewise steep, with nowhere to camp.)

About 15 minutes later, I reached another view: a valley, and the 90-foot-waterfall I’d been looking for. It didn’t seem like it had a lot of flow, despite the recent rain, but it was still nice to see. 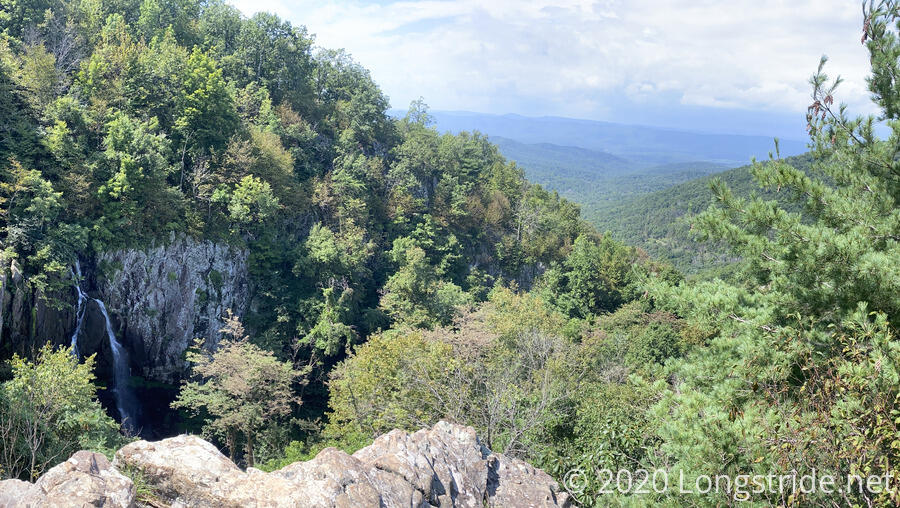 A bit after the view, the camping prohibition ended, and there was a great campsite. I think that was about the nicest (and possibly only obvious) campsite from there to the Shenandoah park border.

As the trail continued to descend, it crossed Overall Run a couple of times. (I was able to rock hop and keep my feet dry; or at least, since they were still damp, keep them from getting wetter). The first truly annoying gnats of the hike appeared, and followed me for probably a good half mile before i was able to shoo them all away.

For its first several miles, the Tuscarora Trail follows the Overall Run and Thompson Hollow trails, and it feels much like any other trail in Shenandoah. As soon as it turned off of Thompson Hollow and onto its own trail, though, its character changed completely. It felt just like it did when we turned off the AT onto the Benton MacKaye trail last year: old, rarely traveled, and something different. This was the trail I was expecting.

What I was not expecting were the spiders. Lots of them. And not just a web or two every hundred feet. These were large webs, undisturbed for ages, with lots of dead insects in them. On seemingly every other tree.

It was so gross.

Partly out of frustration with the spiders, and also because I was tired, I sat down next to the trail and took a break. I was so wet from the humidity I took almost everything off and hung my clothes on a tree to dry out. (They didn’t, but at least I did, and I felt better anyway.)

The trail generally headed downhill, though it bounced along several hills and ridges, before eventually reaching the boundary of Shenandoah National Park. From there, the trail ran on private property, initially on an abandoned road bed that had been entirely taken over by shoe-high plants.

For a little while, the trail ran just outside the park, which was marked with red blazes and signs with “US Property” on trees. I wondered why the owner granted an easement, rather than allowing that land be obtained by the park. I was briefly amused by the notion of that happening, and then someone would have to come out and re-mark the park boundary.

Half an hour after leaving the park (though honestly, it felt like much longer, thanks to the spiders), the trail crossed under the gated stone arch (which I think had railroad tracks above) for a hunting club, through someone’s driveway, and reached US 340, beginning a roadwalk. With a light drizzle.

I began a several mile roadwalk alongside paved, and then gravel roads. And though I knew I was heading towards a river, there seemed a strangely large number of uphills. There were also quite a few cattle ranches.

Eventually, though, I crossed the South Fork Shenandoah River. It was the kind of greenish-brown river I wouldn’t ever want to drink from, even with a filter, and it occurred to me that hikers “aqua-blazing” the AT would be coming up this river. 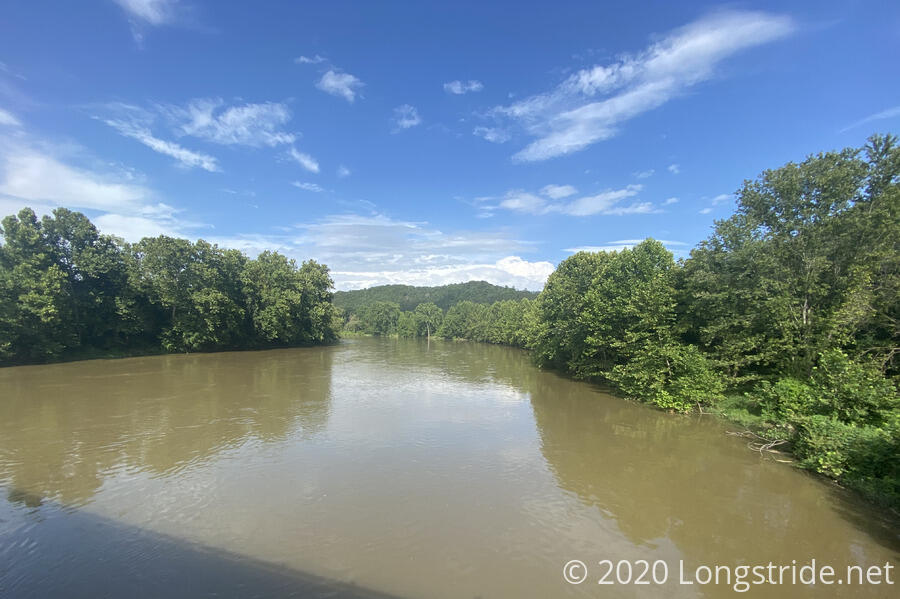 As the roadwalk droned on, I quite unexpectedly arrived at my destination for the day, the Low Water Bridge Campground. It was shortly after 4:30. I had a box to pick up here, and I could keep hiking another few miles to the Little Crease Shelter on Massanutten Mountain. Before my feet could veto going further, I learned that there were showers here, and that pretty much sealed the deal: I was stopping here.

The campground is fairly hiker-friendly: I wasn’t expecting this, but space-permitting, they let hikers stay for free. With a shower, electricity, WiFi, and trash, about the only other thing I could have wanted that they didn’t have was a laundry machine.

I had my choice of any unused campsite; I was initially going to use one of the RV campsites with power, before opting to a campsite on the Shenandoah River with dirt, rather than gravel (much better for tenting).

I set up my tent, and not a moment too soon: it started raining again right after I’d finished. The rain didn’t last long, though, and once it was over, I got a shower and changed into dry clothes.

Showers are great for “shower thoughts”. Mine was, “I wonder if I can get pizza delivered here?” If I could, then, thanks to the box I had sent here, and with a little supplement from the small store in the campground’s office, I’d have four days of food, which would let me take the next few days or my next resupply easy.

After shower, I confirmed that I could get pizza delivered.

The campground was fairly quiet, there were only a handful of other campers (and no other hikers) here.

I took advantage of the campground’s WiFi to catch up on some email, and borrowed the electricity from an unused RV campsite to charge everything up.

While I was stringing up my wet hiking clothes on a clothesline at my campsite, I came across a large green caterpillar, nestled underneath a branch. 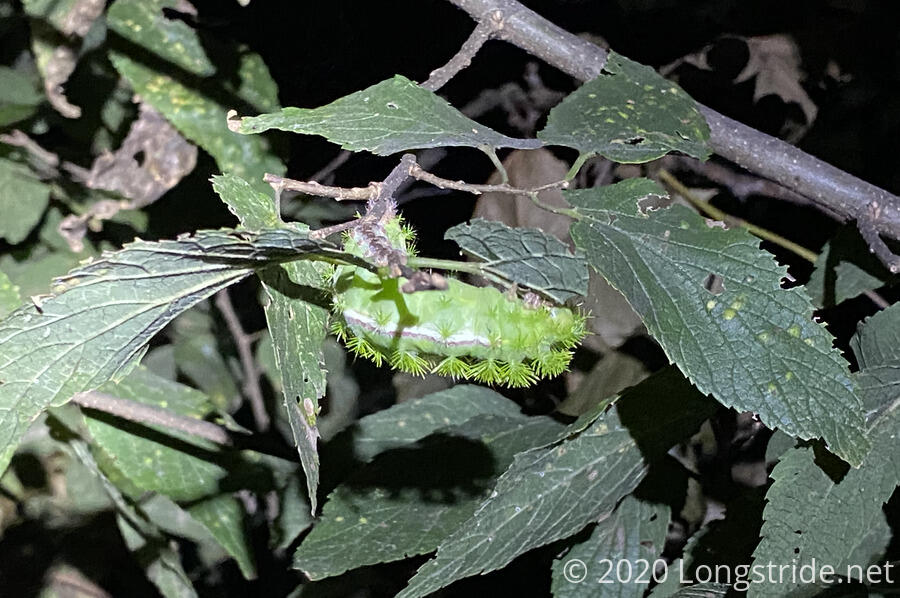 A Caterpillar Naps on a Branch

Now long after sunset, I got into my tent, and immediately began to sweat. With the tent closed up, there was no ventilation, and it immediately got uncomfortably warm. I opened flaps on either side of my tent (who needs privacy, anyway?) and that was enough to allow the tiny breeze to aerate the tent and keep me comfortable.

I checked the weather before going to sleep: with over 85°F called for, taking a short day seems like the right call.

I drifted off to sleep to the smells of the campfire two campsites over.

Tuscarora Trail, 2020
« (Day 6: The Shelter That Has Everything) Previous Entry
Next Entry (Day 8: A Short Jaunt to Relaxation) »