After hiking in the McKeldin Area of Patapsco Valley State Park yesterday, I decided to return to that section of the park today in the hope of getting some better photographs of the not-very-shy deer I saw yesterday.

Starting off at a parking lot alongside the railroad tracks at Marriottsville Road, I headed north about a third of a mile to enter the park on a short side trail that quickly joined the park’s Switchback Trail.

The Switchback Trail would be my primary focus of the day. With the exception of the area near main entrance and the day shelters alongside one of the park’s roads, the Switchback Trail forms a loop around the entire part of the McKeldin Area between Marriottsville Road and the North and South branches of the Patapsco River.

Following Switchback into the park, I climbed the first hill of the day, following the trail to its and, and then continuing to follow the road up the hill to the high point of this section of the park. Shortly after rejoining Switchback at the end of the road to the shelters, I noticed a not-well-traveled trail heading off to the left. Having followed Switchback somewhat further down the trail yesterday, I elected to see where this side trail went.

Shortly after stepping foot on the side trail, I noticed a deer running down the hill away from me, too quickly to get a photo. But at least I had the right idea: there were deer in the woods, and I’d probably find a less skittish one eventually.

For about a quarter of a mile, the trail went dowhill, eventually settling along a short ridgeline before disappearing downhill, leading towards the North Branch of the Patapsco River. Having my path from yesterday’s hike, I knew where the trail continued, and decided to follow the path of the river to take me back to the Switchback trail at a lower elevation.

I was not the only person (or animal) to have this idea; there was a lightly used, but still discernible, path leading through the woods in the direction I wanted to go. This plan worked for about a third of a mile, as the relatively level bank along the river gradually narrowed and became more steep, eventually becoming more difficult to navigate than I wanted to deal with.

With no particularly clear path forward, I instead turned uphill, and charged straight up, coming to a small stream that I followed until it intersected with the Switchback Trail. From there, I was able to continue following Switchback back down the hill, along an easy path to the river. All together, the side excursion added roughly half a mile and a couple hundred feet of extra elevation gain, but it was still a fun side trip.

Not long after passing the trail junction, I caught glimpse of a fawn grazing in the woods to the right of the trail. Although I don’t have a ready means of identifying individual deer, I suspect it was the same one as I saw nearby yesterday. 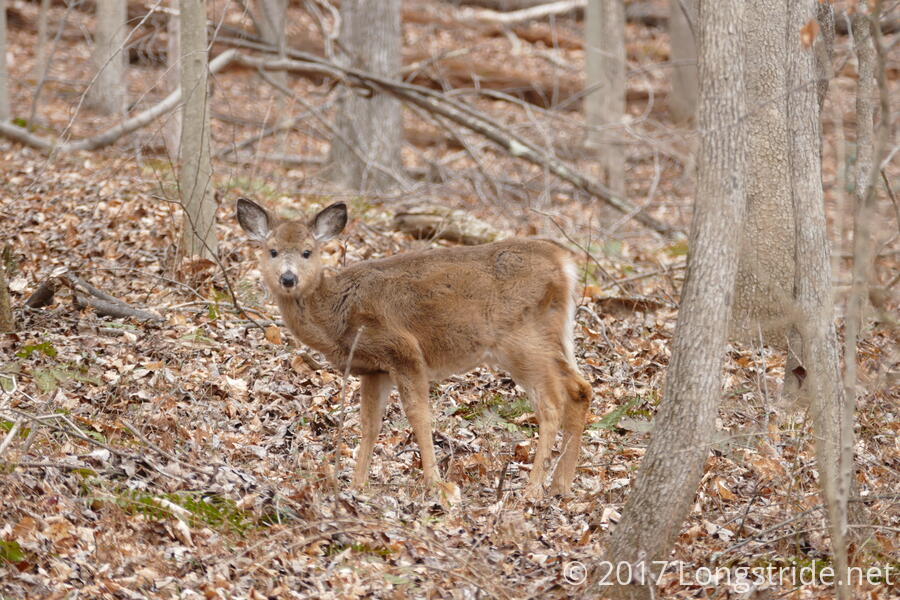 For a portion of the trail, heading south after the last intersection with the Plantation trail, the North Branch widens a bit, and splits into two channels with a grassy median between. At a place where a path led down to the river, the near channel was largely empty, and the far channel had a set of stepping stones leading across to the trail on the other side of the river, which I hiked last week. I briefly crossed the river and returned, just because I could.

Continuing south on Switchback, I followed the relatively flat trail along the river, until it separated near the Rapids trail and turned uphill. After a short hundred-foot climb, the trail meandered through the woods, crossing the path I traveled yesterday, heading west. With relatively little further fanfare (and no further deer sightings), the trail brought me on a complete loop, to the park boundary and past the intersection of (I kid you not) Marriottsville Road and Marriottsville Road Number 2, before returning me to the railroad crossing parking lot.