Hiking with a face mask on is no fun, but that’s what we did today because the air was full of sand.

After a long day yesterday (34 km, a little more than 21 miles), and a nearly as long day planned for tomorrow, CareFree and I decided to “take it easy”, which meant a 25 km (15.5 mile) day to the resort at La Pared.

We started off a little after 8 am, with a large quantity of sand in the air, thanks to another calima blowing through. We opted to hike with our face masks on. Between the sand and morning sun, there was a reddish tint on everything, and with masks, it felt a little like we were hiking on mars. 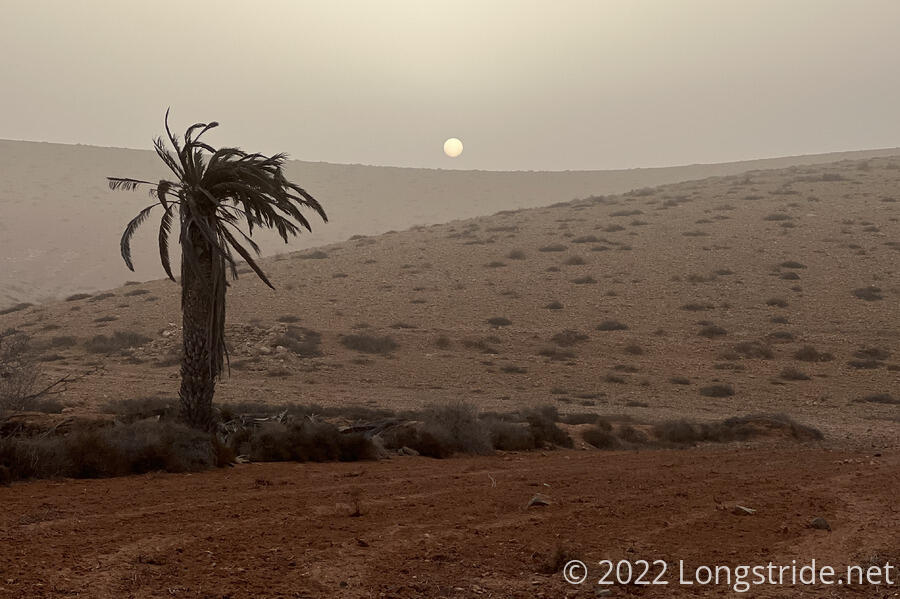 Sunrise into a Sandy Sky — The sun rises into a sand-filled sky.

Eventually, the dirt road we were hiking down turned into a proper trail heading into the mountains. We passed an information sign discussing farming on Fuerteventura (which is made difficult by lack of rain and limited fertile soil). The sign included a picture of the nearby landscape. Our view was much more limited. Instead of a view out to the ocean, we could barely see over the next hill. 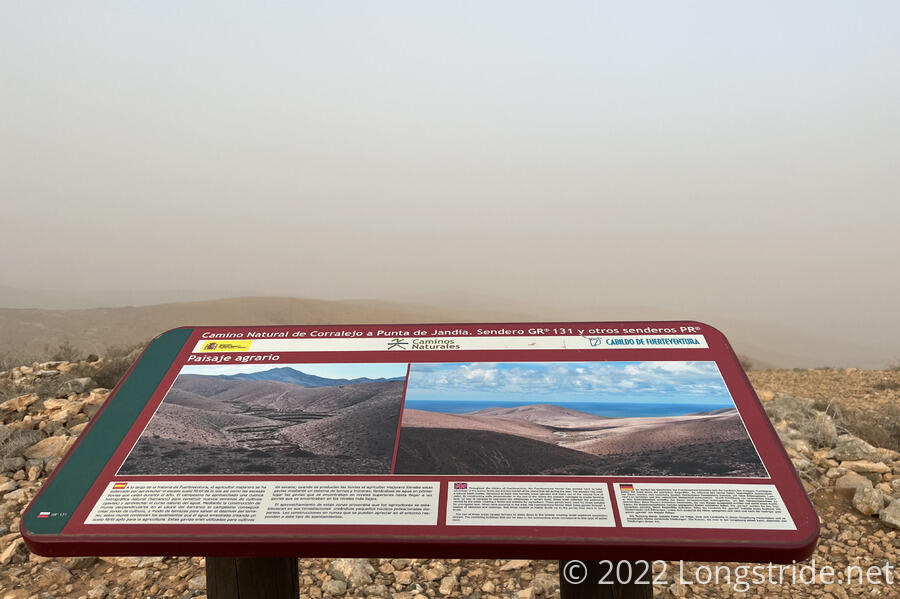 A sign on farming practices includes a picture from nearby, showing the ocean, in stark contrast to the incredible haze currently in front of us.

Nearby, three recently used campsites were the first campsites we have seen so far this hike. Not too long ago, they would have had an excellent view.

As our trail headed into the mountains, it gradually got a bit more rugged. From a distance, it even looked somewhat dangerous as it wrapped around the mountain, but as we hiked on, it became clear the trail was much safer than it looked like from a distance, and we were actually rather impressed with how well-maintained the trail was. 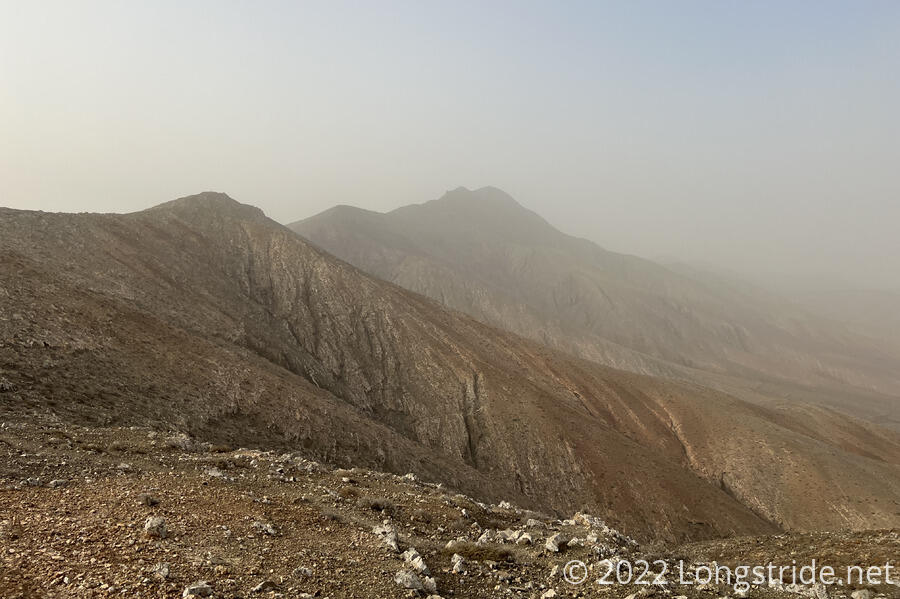 Probably the best mountain view we got today.

We stopped for a snack break where the trail overlooked several nearby mountains and a home in a valley below. Finding a spot to stop was actually rather tricky, because there were goat droppings along much of the trail. From where we stopped, we could even see five goats on the slopes of the next mountain over.

We followed ridges (and near-ridges) for several miles, and were it not for the sand, we would have had amazing views. Still, actually hiking in the mountains on trails was a nice change of pace than the dirt roads from one town to another.

As we descended towards our next town, Cardón, we passed near a few other goats who had been walking along the trail, and passed by a nicely placed bench near the trail crest.

In the distance, we saw a pair of goats, one white and one black, running along the mountainside way faster than seemed possible.

In Cardón, we stopped at a bar for ice cream and sodas (and a coffee for CareFree). We had perfect timing, getting there right before noon. After we’d gotten our snacks, it seemed like half the town showed up in the bar for lunch.

We left town climbing up a steep paved road that led us to another trail shelter. This one, we guessed, was clearly used for parties; a frame had been set up outside the shelter for the rolled-up tarp inside, and there were two grills.

Shortly after, the dirt road ended and the trail became a very well maintained bordered path through a lava flow. 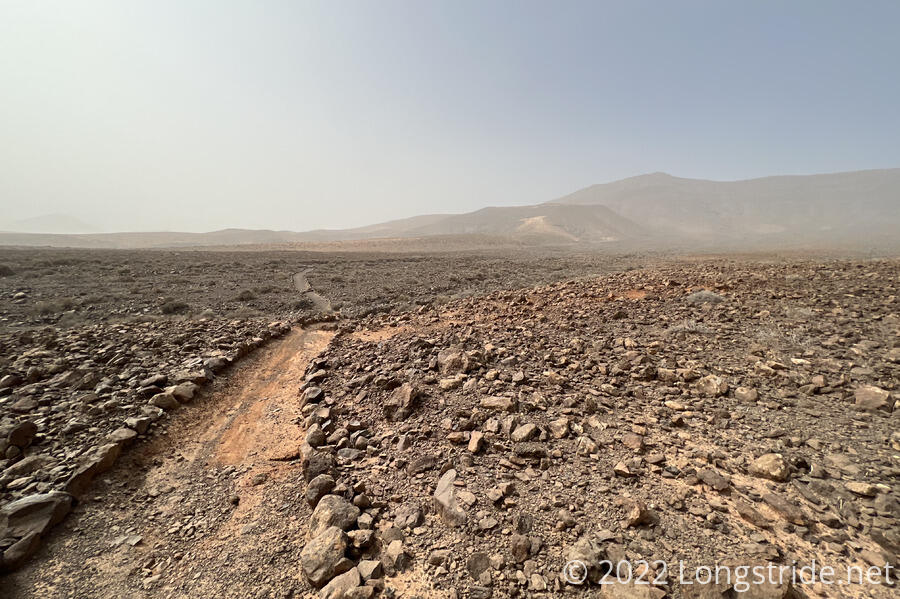 A well-groomed trail goes through a volcanic wasteland.

Later, the trail crossed a very curvy road and dropped down a bit into a valley, where parts of the trail had been washed out or damaged by water flowing down the trail; and then climbed up into an area where the trail had been mangled by construction, causing us to get slightly off-trail and unnecessarily hike up a steep slope until we found the trail again. All that to avoid a roadwalk, which was good, if frustrating, especially since the trail wound up following the road anyway.

Part of the trail diverged from the road onto a narrow path sandwiched between the road, and the fences of expensive houses with very large and mean-looking guard dogs.

We stopped for a break at an open space just off the road, an objectively terrible place to stop, with no shade and cars whizzing by, though that there was more than enough space to sit down made up for those shortcomings.

Eventually, we departed the road for a parallel dirt road, which became very wide and extremely hard-packed. On one side of the road was a goat farm, with perhaps a hundred of the largest goats we’ve ever seen. A water truck passed us; later, we passed it pouring water into a pit in a sheep pen. 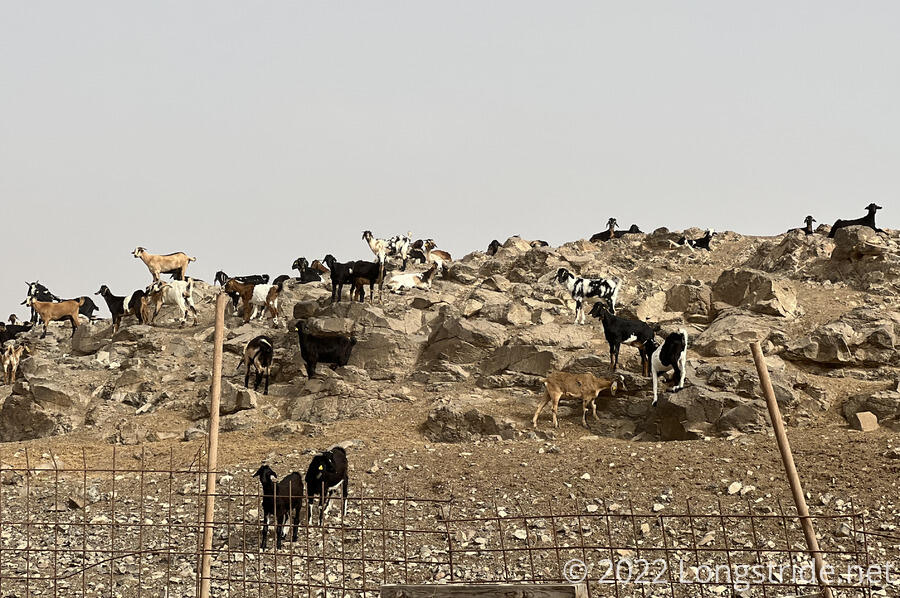 Goats — A small portion of a large goat farm.

After a detour into what felt like a drainage ditch (and which was practically lined with toilet paper), the trail joined a promenade in a road median, lined with trees, cactuses, and artistically curvy benches with flaking yellow paint, and we made our way to the resort to check in.

After showering, we went to the hotel’s diner buffet. The price wasn’t terribly unreasonable (though the quality of the food was a little sub-par), but the drinks (as in water or soda) were outrageously expensive. After dinner, we stopped at the resort’s mini-mart to get water and food for tomorrow. On the way back, I smashed my foot into a step up near our room because it was too dark to see. (Apparently, safety lighting is not common here.)