Today, we set foot on our fourth Canary Island, Gran Canaria, and readied ourselves for the three-day hike across the island.

With a 7:30 am departure from Fuerteventura scheduled, we woke up before 6 am (long before sunrise) in order to pack our bags and make our way to the port.

It was a bit cold and windy, and as we walked, the route seemed oddly familiar: roughly half the route to the port was on the GR131, as well as the path we took to the bus station yesterday morning.

The distance between Fuerteventura and Gran Canaria is the longest gap between the islands, so we had a relaxing two hour and twenty minute ride on a Fred Olsen Express ferry. As on the last Fred Olson ferry we were on, from Lanzarote to Fuerteventura, we were subjected to their frequent and repeated covid safety messages on the TVs throughout the ship. The safety messages cycled through five or six messages with somewhat-related low-effort graphics, including requesting people to use (credit) cards instead of cash; “frequent hand washing”; and “prioritize our elderly”, with a picture of a unisex bathroom indicator with a cane photoshopped into the male figure’s hand.

We arrived in port in Las Palmas de Gran Canaria right on time, and grabbed a taxi to head into the city. The calima sand-filled skies did little to provide us with a good view of Gran Canaria as we approached.

Tonight, we would be staying with Eric, a friend of mine from Washington DC. He and his wife Amber moved to Gran Canaria in mid-2019, so they were among the first people I told that CareFree and I were considering hiking the GR131.

Eric met us where the taxi dropped us off, across the street from their apartment, and took us up to his home.

We chatted for a bit and introduced ourselves to their cats, “Frank” and “Ciso” (short for Frankenstein and Narciso), and worked out a rough plan for the day.

Around noon, Amber, CareFree, and I walked to a restaurant relatively nearby their house. On the way, we went through a public park with some nice flower arrangements. Eric, running an errand, met us there. 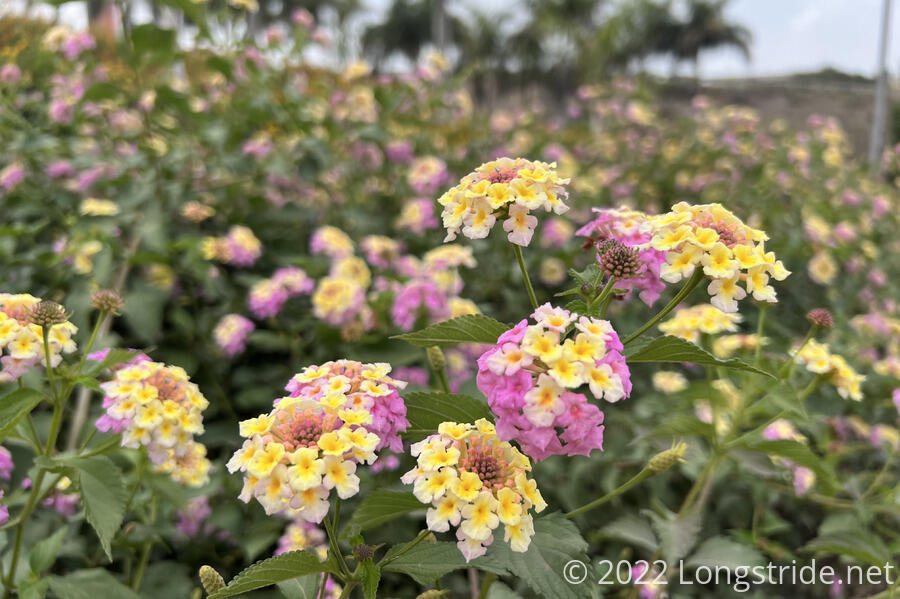 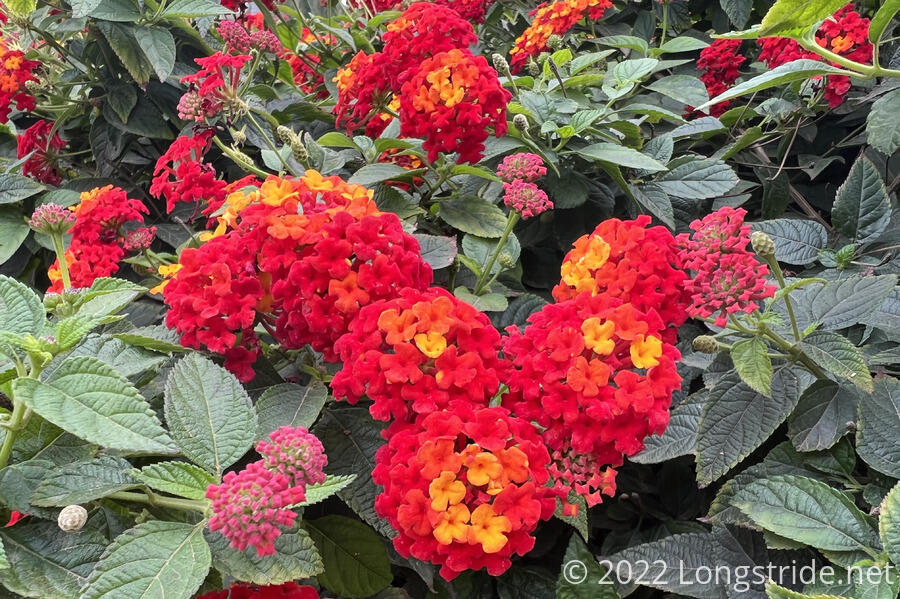 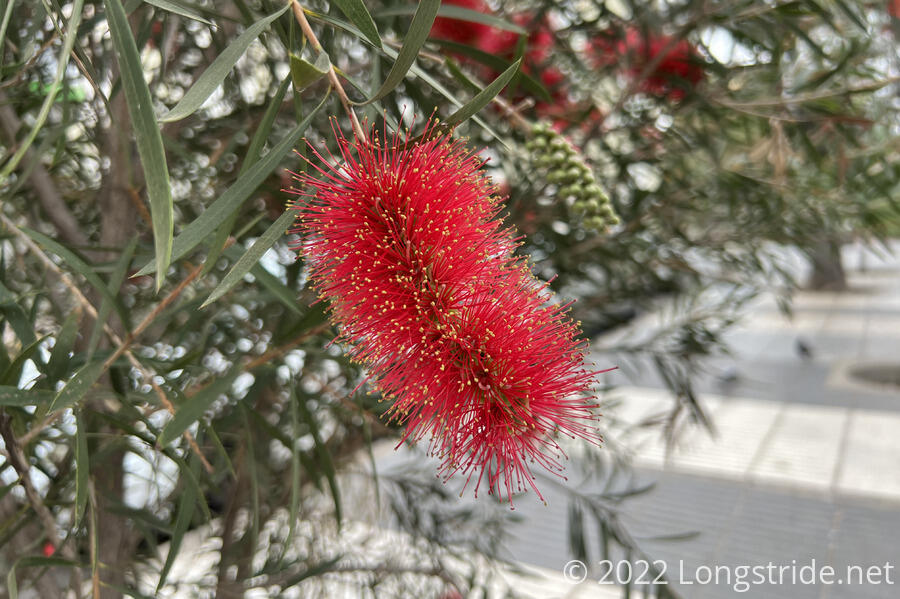 Back at their apartment, CareFree and I worked out a plan to hike through Gran Canaria in three days (rather than the five in the guidebook). At roughly 74 km (46 miles), this would give us three days of a little more than 15 miles each. The hard part would be the elevation gain and loss, which would be roughly 3200 meters (over 10,000 ft) each, more than half of which would happen on the last day. But, now that we were a week and a half into our hike, and in somewhat better shape than when we started, we’d be able to handle that.

Then, we’d come back to Las Palmas de Gran Canaria Friday evening, and hang out with Eric and Amber on Saturday, which would be our first full zero: no travel or hiking.

Once we finished planning, the four of us went out to dinner, stopping by a sporting goods store to make one last-ditch effort at getting a fuel canister that worked with our stoves. (They did not have any, and a smaller hiking-only store nearby had just gone out of business.)

Dinner was at a little restaurant called La Burriteria. I got a “Curryburri”, a chicken burrito with curry sauce. It was fantastic. So was the ice cream and brownie desert, served with a sparkler.

Shortly before dinner, a light drizzle started, and during dinner, the rain picked up a bit, stopping before we finished. It wasn’t very much rain, but we hoped it would help to clear the sand out of the air. 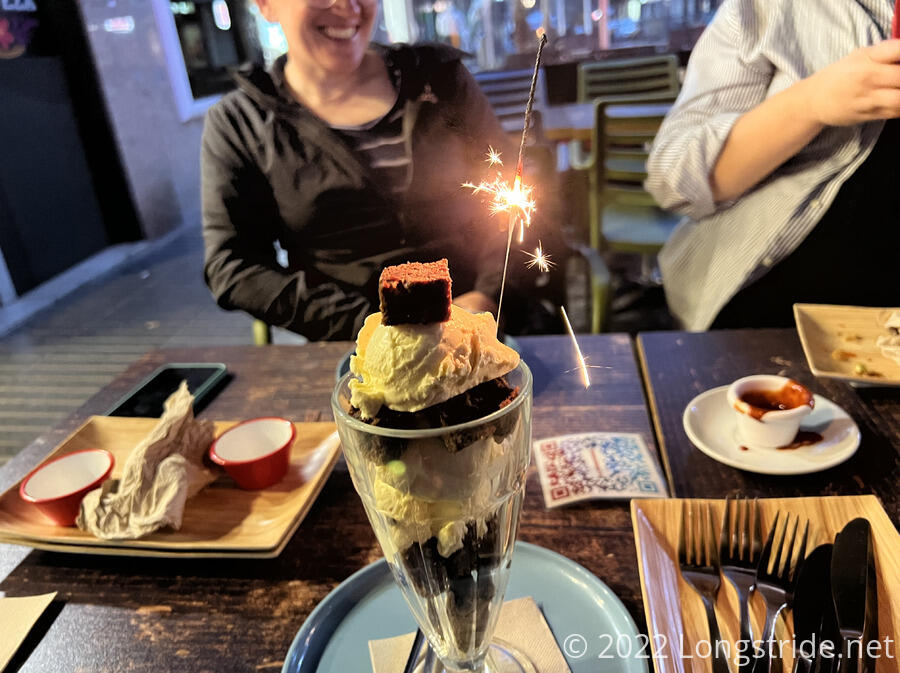 Ice Cream & Brownies — This desert came with a sparkler.

We returned back to Eric’s apartment after dinner, and CareFree and I went across the street to the grocery store before it closed, getting our resupply for the next three days.

With grocery shopping completed, we re-packed our packs, leaving behind some non-essential items to save weight. The upcoming few days will have a lot of elevation change, and that’s always easier with a lighter pack.

Tomorrow: we leave early to go to the Faro de Maspalomas, in the south of Gran Canaria, to begin our hike northwards.