Today was the first day of our planned three day hike across Gran Canaria, starting at the lighthouse in Maspalomas.

Gran Canaria has not yet designated its portion of the GR131, so we’re following a route described in our guidebook that is based on what the route is assumed to be: starts in the south, goes north, and stays high for as long as possible.

In contrast to Lanzarote and Fuerteventura, Gran Canaria is not a desert, and is more forested. The island is roughly circular, with a volcano caldera near its center.

CareFree and I hadn’t planned on an exceptionally long day, but today would probably have more climbing in a single day than we’d previously done this hike, so we wanted as early a start as possible, given that we’d have to get a bus to Maspalomas, almost halfway around the island.

We left Eric’s place around 7:15 am, and caught a local bus to the main bus station in Las Palmas, and from there, got an intercity bus to Maspalomas.

It had rained some more overnight, and we weren’t entirely sure, but the air seemed like it might have been a little bit clearer. There was still definitely a notable haze in the air, and we resigned ourselves to the fact that it was unlikely we were going to get crystal-clear views the rest of this hike.

By 9, we’d reached the bus stop in Maspalomas, and a short walk south brought us to Gran Canaria’s southern shore, and the Faro de Maspalomas. 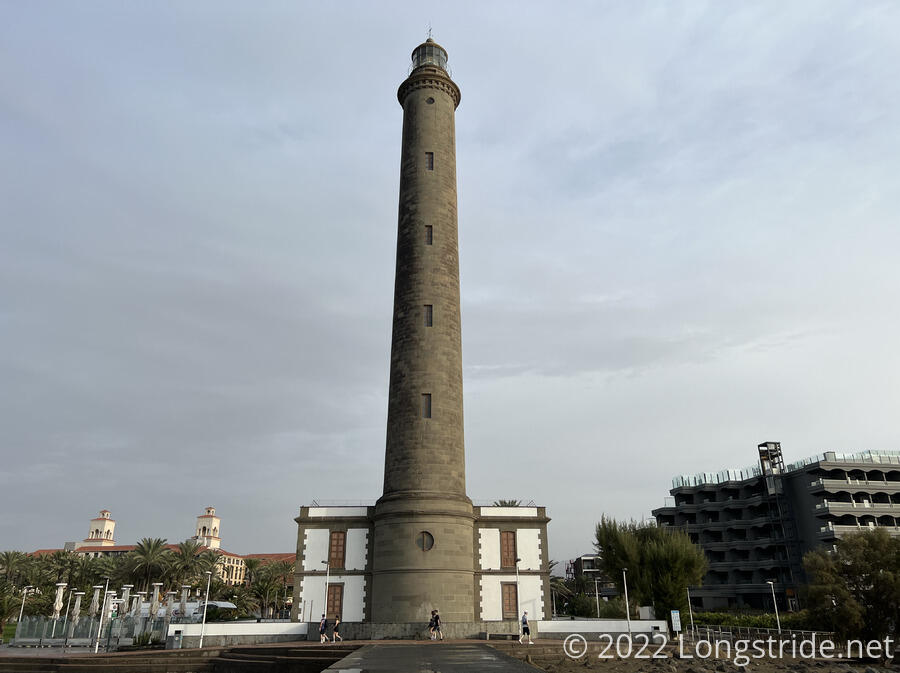 Next to the lighthouse, a sand sculptor had left a large sculpture, including Homer Simpson in an inner tube; an alien sitting on a couch; and a pair of really fat cats sitting on the word “Maspalomas” that made up the body of a dragon. (I was slightly surprised there weren’t any pigeons, given that Maspalomas means “more pigeons”.)

From the lighthouse, the trail headed east along a nice promenade between storefronts and the beach, and then turned north, going between a resort and some protected wetlands and turning into a bike and pedestrian path.

The path headed nearly due north, in a straight line. In the distance, we could see the mountains calling to us, and we could almost believe that the rain that fell overnight might possibly have made the skies just a little bit clearer. (In any case, it was much better than the worst days on Fuerteventura.)

The path crossed a few roads, and then petered out, turning into a dirt trail that followed a flood channel. On the outskirts of Maspalomas, we passed a pair of tacky golden couches surrounding a pile of trash that also included a few other pieces of furniture. There was enough evidence to suggest that someone was probably living there.

The trail then turned off that path and veered west, joining a relatively high-traffic road (with a separated bike/pedestrian path) that took us past a water park and a go-cart track. A turn onto another road lost the separated trail, but not the traffic, and to get away from the road, which was definitely unsafe due to low visibility (a large number of plants encroached on the shoulder, hiding us from oncoming drivers).

A little way up the road, a trail appeared in an open space near the road, and we followed that instead. It took us to some kind of “Rancho Park”, and once we turned back onto the trail and began ascending a twisty mountain road (still with lots of traffic), we could see that they had an absurd number of camels for the space they were being kept. (I think I stopped counted at over a dozen camels, and didn’t stop to take a picture because there was too much traffic.) Getting a little tired from the steep climb, I proposed stopping for a snack break at a pull-off on the side of the road. I missed a seeing garbage strewn around the area; CareFree called this the “most horrible place on the whole hike”. It was hard to disagree.

The road, which probably had more traffic than any other road we had to roadwalk, took us into the town of Montaña la Data, and we stopped for a break, getting the cheapest ice cream and sodas on trail so far. We had perfect timing; as soon as we’d left the tiny store (maximum occupancy 2), four more people showed up to get in.

The trail continued through town, with more uphill. Along the way, we got some views back to Maspalomas and the lighthouse, and the ocean, though it was all hazy thanks to the sand still persisting from the calima. Also, a dead branch fell off a palm tree maybe only ten feet in front of me and triple that distance behind CareFree. (This was the second time something like that happened; the first was on the Appalachian Trail in Vermont, when a branch fell from a tree between me and the person hiking behind me.)

Leaving Montaña la Data, the trail continued on a couple of different paved mountain roads, taking us further inland, and further uphill. Other side roads went off to communities near the tops of mountains.

As we got further from the town, the cars dwindled and the number of bikers passing us increased, most of them heading back downhill towards Maspalomas.

Our road passed through an abandoned housing development, Monte León. Roughly a dozen houses were in various stages of construction, with perhaps one or two actually completed to the point of being livable. (One house probably was occupied; a dog stood guard, observing the whole community from its perch.) Passing the welcome sign for the community, a sidewalk appeared on both sides of the road, adorned with palm trees. The sidewalk continued a surprising distance past the last house in the community.

As the road continued to climb, we saw one of the most interesting landforms of our hike so far, a pair of valleys separated by a (large) pointed rock formation. In the bottom of both valleys was a road, and on the near one, we could see both cars and cyclists. 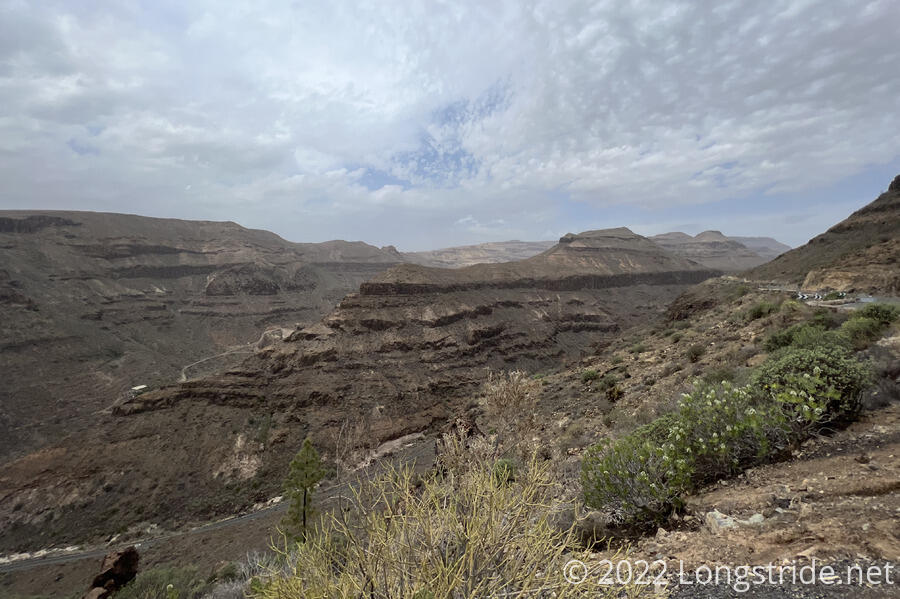 A little further up the road, in a small clearing offset a bit from the road, we stopped for a break. The bikers continued to pass, including one who stopped to ask us if we knew how far ahead the next town was, since he had run out of water.

As we continued, from our vantage point, we could see a large parking lot in the valley that was nearly completely full of cars. This was for the Palmitos Park, a (evidentially very popular) botanical park. Making our way further up the road, the park itself came into view, a more verdant green nestled at the confluence of two smaller valleys. Advancing, we also saw some swimming pools. They turned out to be for dolphins, and even from over a thousand feet up, you could hear their squeals. There were six of them, being trained by someone in what seemed to us an entirely too small enclosure. (And while I’d prefer the dolphins to be free, rather than caged up to perform tricks, to to be fair, there may have been a larger pool inside that we couldn’t see.) 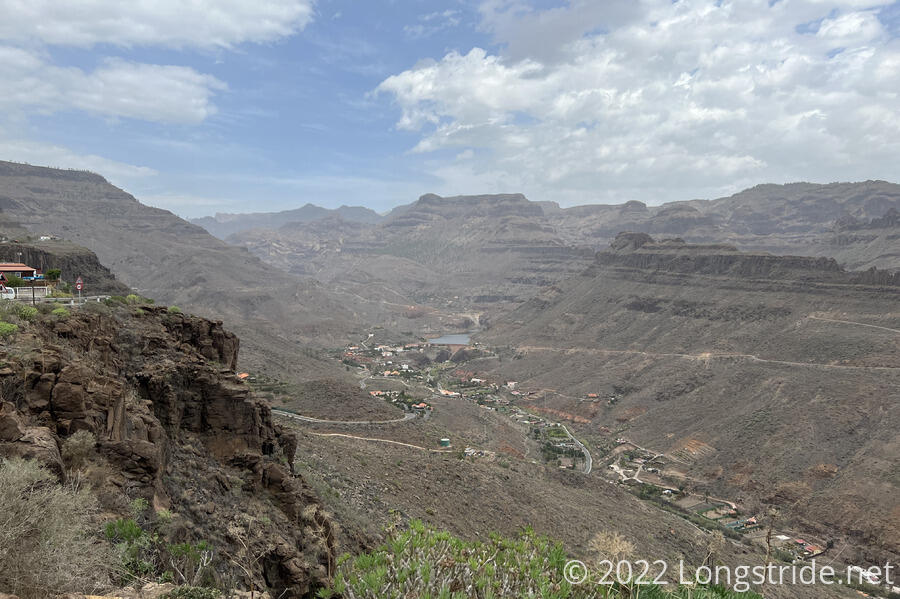 Ayaguares — View from the south.

Our next stop was in Ayaguares, a small town nestled in a valley below a water reservoir. We stopped for lunch at Bar Eva, roughly in the center of town, next to the church.

I ordered a dish of fried pork. Having heard that the Canaries have an excellent potato specialty, we also ordered a tapa of the “papas arrugadas” (literally, wrinkled potatoes, but translated on the sign as Canarian Potatoes”). The potatoes arrived, and with mojo sauce, they were, by far, the best potatoes I have ever had. My fried pork came later, was also very good, and also came with potatoes. 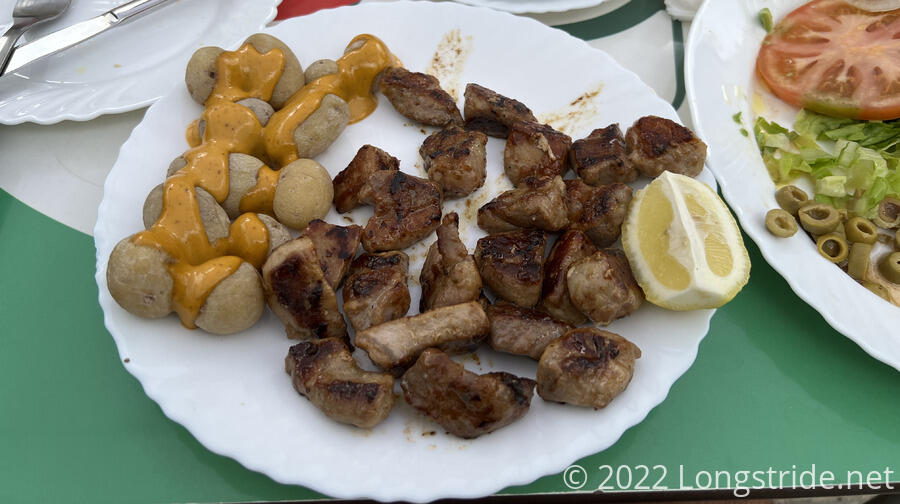 We got rained on a bit at the bar; thankfully, places with outdoor seating also have umbrellas, so that wasn’t a problem. The air was pretty dry, so the rain that fell very quickly evaporated, and by the time we started hiking again, the only evidence it had rained was that it was now slightly humid.

Now somewhat late in the afternoon, we continued on, climbing up out of Ayagaures towards our next town, Tunte. We passed by a couple of campsites, and found a tiny bit of trail magic: a “fun size” Milky Way package on the ground, which we immediately ate. 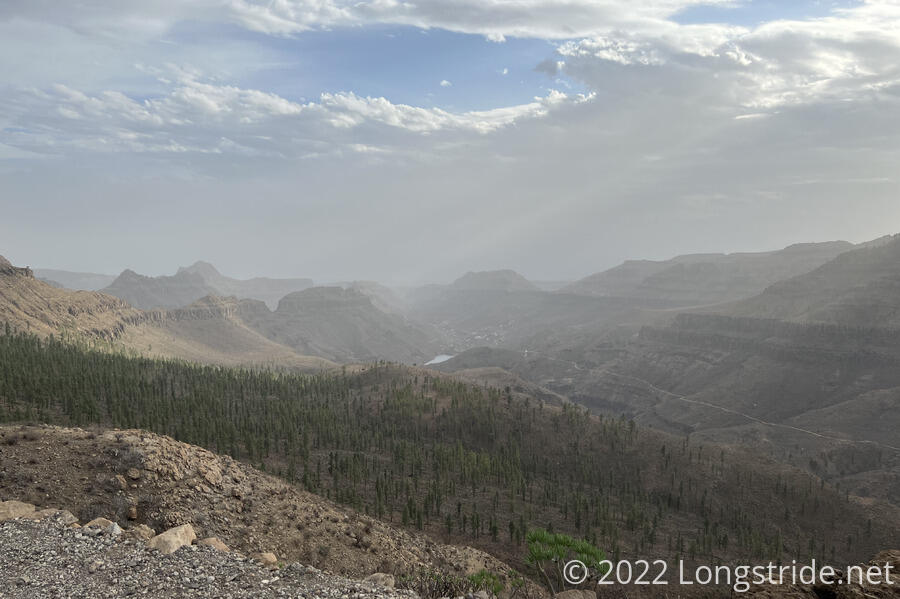 Ayaguares — View from the north.