Today, we visited the towns of Tunte and Cruz de Tejeda as we continued our hike through Gran Canaria.

As CareFree and I continued from yesterday, the winding mountain trail with wide-open views to ridges and valleys with pine trees felt a lot like parts of Northern California on the Pacific Crest Trail, but slightly greener. What seemed a little unusual to me was the ridges were dotted with pines, but fairly widely separated (rather than a continuous line of trees, or none at all).

Some parts of the rock face (made of volcanic rock) were pockmarked with holes of varying size. Sometimes, plants grew out of those holes, clinging to the rock, but also slowly eroding it.

Crossing over a pass, we began our descent to Tunte. A hole cut into a rock wall adjacent to the trail revealed a spring, with a small faucet that probably ran when the water level was higher. Just past there was a small cave (more, a few foot high and deep rock overhang) that could provide an emergency shelter in a pinch.

We continued to descend, and finally reached the outskirts of Tunte. The road into town was an old paved road, with street lights on one side, and blossoming cherry trees on the other.

Most of the town’s buildings were white boxy structures with orange shingled roofs. But while Tunte’s buildings had a clear “uniform”, the town somehow avoided the boring sameness of every town on Lanzarote. 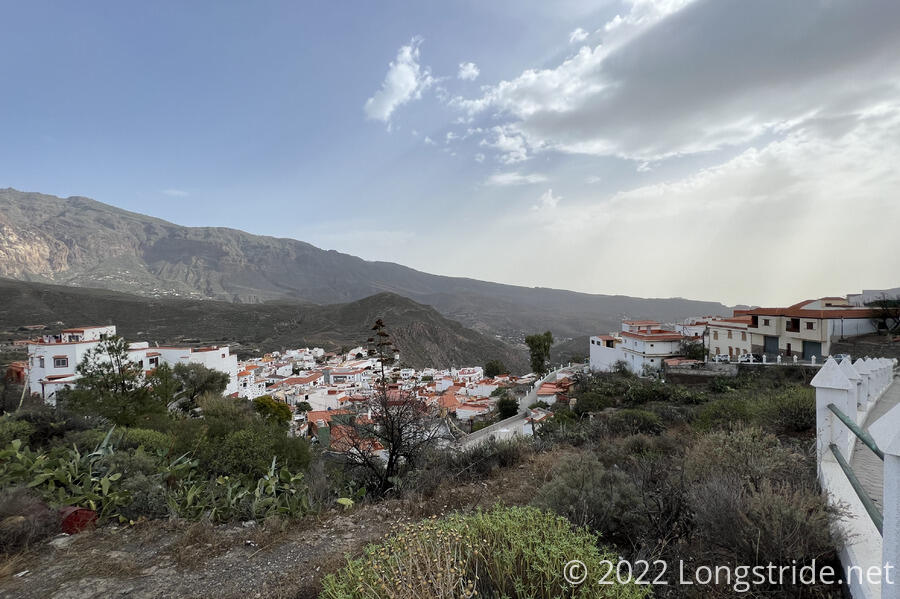 We stopped for breakfast in Tunte. The town is built on the side of a steep mountain, which meant hiking down narrow, steep, twisty streets to somewhere near the center of town. We both got hamburgers, and a dish of the Canarian Potatoes. These potatoes were even better than yesterday’s, because (in addition to the mojo sauce) they were also seasoned with salt. We showed up at the perfect time; right after we sat down, everyone else showed up, and what was a bare plaza filled with tables was now almost overflowing with breakfast patrons.

There were several street cats we saw while in Tunte. One of them wandered around us while we were eating, making demands for food. 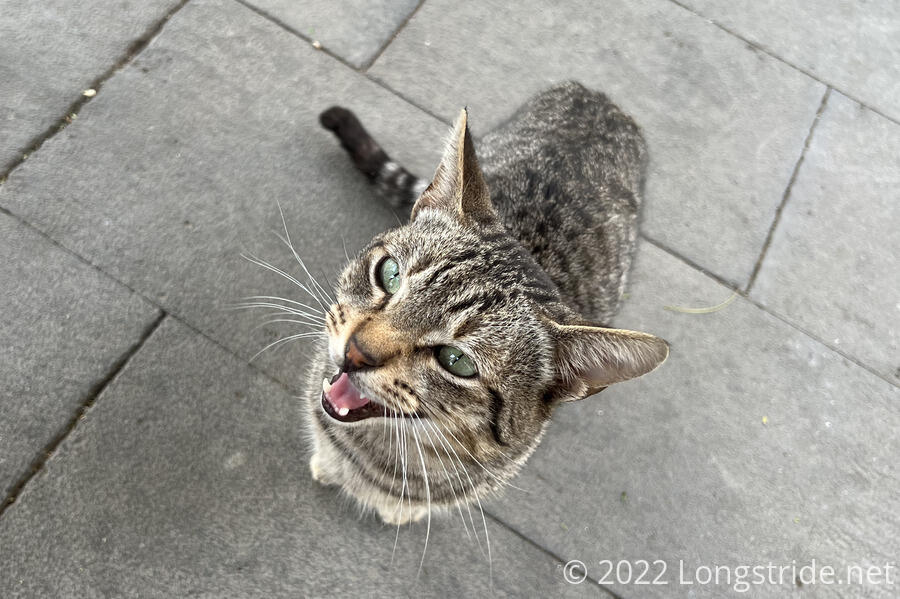 After we finished eating, CareFree made a quick run to a nearby minimart for some more snacks for today, and we continued towards our next stop, Cruz de Tejeda.

We climbed back up out of Tunte and returned to the trail, which for a while today, followed a path recognized as part of the Camino de Santiago, the famous network of hiking trails in Europe that lead to the cathedral of Santiago de Compostela in northwest Spain.

As we left Tunte, half a dozen other people walking or jogging the trail passed us. The long climb up the mountain gave us a good view back to Tunte as we crossed a mountain pass. While we took in the views, quite a few bicyclists passed on the road.

Shortly after, as we continued to climb up the steep and rocky trail, a trio of mountain bikers passed us going down the mountain. They obviously knew what they were doing, but it still seemed to me to be awfully dangerous.

As the trail took us higher, we reached a divide between two valleys, with Tunte on one side and a smaller town on the other. It was here that I think I really began to appreciate Gran Canaria’s scenery.

Ahead, the trail switchbacked its way up the side of a mountain and over a pass. It reminded me a bit of Forester Pass on the Pacific Crest Trail, except with far less snow.

As we crested the pass, a large group of hikers (at least a dozen, the largest single group of any kind we’e seen anywhere on the trail so far) came down from the pass summit. A couple of them spent a lot of time and effort preening to look good for photos, and they were otherwise generally kind of obnoxious.

Past the pass, the trail leveled off a bit, and we sped along, eventually stopping for a snack on the outskirts of a pine forest. 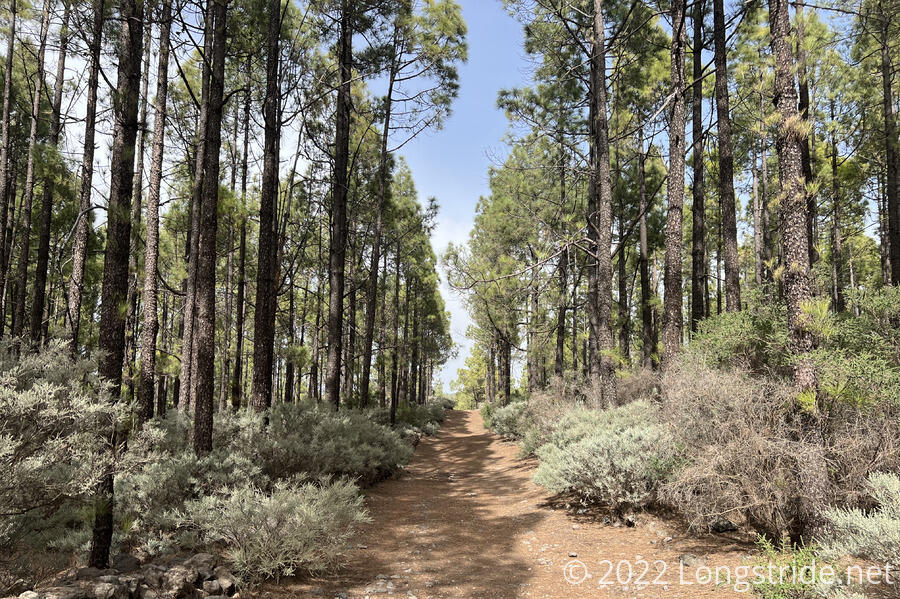 The high point of the day, at a conjunction of several trails with a view overlooking a valley, was shortly after our break. I was glad we didn’t know about the view there, because then we might have been tempted to have our break there, and when we arrived, there was another large group of hikers taking a break. Apparently, this section of trail is very popular.

We also passed a rabbit on the side of the trail. It was clearly sick or injured (or both); it made no attempt to move when we hiked past, and it didn’t look very healthy at all.

The trail took us past a sports camp, currently closed, and with warning signs and barbed wire to keep people out (or in?). From there, the trail followed several dirt roads, and then a nice path that paralleled a curvy mountain road.

As we approached Cruz de Tejeda, the trail took us along ridges with views to some amazing landforms. But the ridge tops meant it was also windy, and the wind seemed to be blowing in more sand: it was getting hazier and a little harder to breathe. The wind also blew in some rain clouds, and we got drizzled on a for a few minutes here and there.

The Rugged Interior of Gran Canaria

We soon arrived at Cruz de Tejeda, a crossroads in the mountains. About all that was there was a hotel (full), another hotel (expensive), a restaurant, a farmers market with half a dozen stalls, an information booth, and probably a tourist landmark that we totally overlooked. Also, there were chickens, and a pair of roosters chasing each other around. 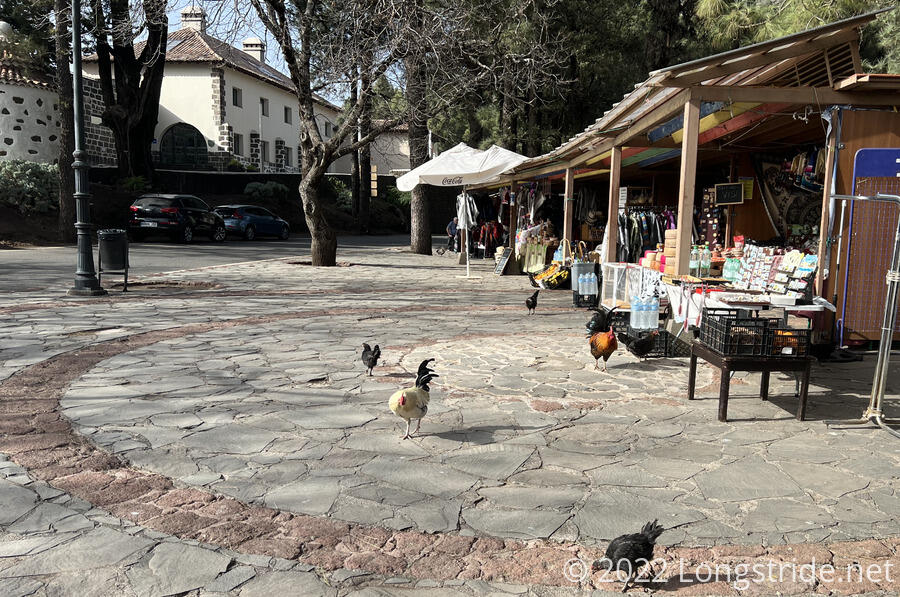 With the air quality worsening, after a chat with the woman at the information booth (who really liked my beard), we decided against hiking over a mile down the mountain to a hostel in town proper, and booked a room at the Paradores de Cruze de Tejeda, the afformentioned expensive hotel.

After checking in, and getting a shower, we tried to get dinner from the bar-restaurant across from the hotel. However, it was closed by the time we got there, so we were left with getting a meal at our hotel’s restaurant. As we walked back in, one of the street vendors still open beckoned us over, and gave us some small cheese and marzipan samples in hopes we would buy some. Also, he really liked my beard so much that he decided it was okay to touch it, which it really wasn’t.

Deciding to splurge (because we rarely spend 40 € per person on dinner), we both ordered the “traditional menu”, which was an expensive butvery delicious and filling five course meal, including bread, cheese, soup, a pork dish, desert, and a glass of wine. We couldn’t do that every night, but it was definitely worth it.

Tomorrow: We finish our hike of Gran Canaria, heading to the Puerto de las Nieves, on the outskirts of Agaete.