As I was trying to go to sleep last night, I could hear a deep humming as the wind blew; I assumed it was caused by the wind flowing past the mountains. I was a bit concerned by the wind and the cloud that had been slowly descending on us, but after I woke up briefly around 10, I noticed that I could see stars in two directions, and I decided that we were going to be fine after all.

I actually had to take off my down jacket around midnight; it wasn’t as cold out as I feared it would be, and I was way too warm in my sleeping bag with it on. That said, the warmth certainly didn’t help me get out of my sleeping bag any quicker come morning.

Early in the morning, as I was attempting to adjust my rain jacket over my feet, the zipper on my sleeping bag spilt open. I needed to get it completely closed so I wouldn’t lose all the heat inside, and I had to fight with it for quite awhile to get it to close properly. Unfortunately, in the process, I apparently accidentally elbowed Quoi in the face a few times. Oops.

Morning was bright, crisp, and clear, with no overnight precipitation. We got pretty lucky in that regard. But none of us slept well, and none of us were inclined to get up at anything resembling early. I actually hid back in my sleeping bag for a while because it was so incredibly bright outside.

All of us had frozen sock-sickles, which only barely started to thaw when we placed them out in the sun while we were sitting around trying to warm up and work up the courage to actually get out of out sleeping bags.

Sometime after 8, we noticed a group of three hikers on the trail a bit away. Although it was not entirely clear, it seemed like they had noticed us, and were trying to make sense of the ridiculous scene of our giant tarp planted on a barren rock in the middle of nowhere. We joked that they must be wondering who these morons were that camped in such an exposed place in the middle of nowhere so close to Forester Pass, and were still there so late in the morning.

We finally left camp around 9:15 am, but we really should have started much earlier in the day. Our hike up to Forester Pass went without much postholing, but our two mile hike with its thousand foot climb had squishier snow than was necessary.

Forester Pass is especially known for being the high point on the Pacific Crest Trail, at 13,124 feet (about 1400 feet lower than Mount Whitney). Once we cross the pass, we will never be that high again for the rest of the trail. The south face of Forester Pass is especially known for “The Chute”, a steep slope that, in wintry conditions, sweeps hikers who slip off the traverse near its top down to the lake 600 feet down, nearly a mile via trail away. With the low snow year, though, a significant portion of the jagged rocky chute was exposed, making that glissade potentially very dangerous. 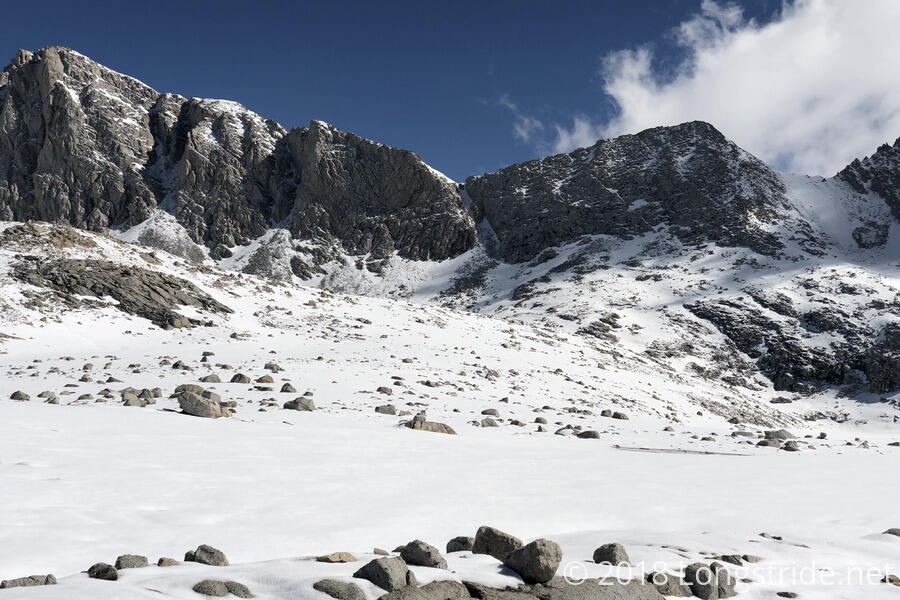 After an hour and a half of hiking, and several breaks, we made it to the top of Forester Pass, with few difficulties. The short traverse across the chute was not especially difficult, but melting snow had caused small avalanches from above to cross the chute, making crossing the center bit a little more challenging.

We rested on Forester Pass for a while, celebrating a bit with the group that had passed us earlier (including Foxtrot, whom we saw and left at Tyndall Creek yesterday). However, the second leg of our hike down Forester, would prove to be significantly more challenging.

Crossing the pass took us out of Sequoia National Park, and into Kings Canyon National Park. Almost immediately, it was clear there would be fairly significant postholing: the group that left the pass ahead of us was moving fairly slowly, and even following in their footsteps, we were frequently stepping in snow up to our shins, if not deeper. It was just as exhausting, if not more so, than the postholing we had to deal with yesterday.

We got to a place on the descent where the trail was completely obscured in a steep slope of snow, making forward progress there very difficult. To go forward, we instead glissaded (slid) down the slope, essentially cutting a wide switchback, using our trekking poles to guide, slow, and stop our descent (towards a large pile of rocks). I was a bit apprehensive of this, but it was going to be a much quicker way down, and potentially safer since we’d be in more control than if we slid down the slope ahead.

Quoi went first, and then I followed, followed by Flowers and Dylan, who came down almost on top of each other. This saved us about two-tenths of a mile of postholing through the snow, which probably translated into saving ten to fifteen minutes of hiking, at the pace we were going.

We climbed up to the rocks and immediately stopped for a break. We were tired from the postholing, our feet soaked, and our pants and packs wet or covered with snow from the glissade. Dylan, also, was not feeling well. We think it was a bout of altitude sickness: we had gained and dropped nearly 1000 feet since we started this morning, after camping at the highest altitude we had ever camped at, on the fourth day of extremely strenuous hiking. Odds were, after the rapid 100 foot drop down the mountain with the glissade, someone was going to get sick. Dylan had just had the additional problem of very wet and cold feet: in his many postholes, his shoes kept slipping off, and he’d have to often stick his whole arm down the hole to get his shoe (and then scoop out the snow and ice that filled them up).

At this point we knew that our original plan to make it out of Kearsarge Pass today and into town was not going to happen — we still had too far to go, and we were tired. We settled on trying to get down to the campsite at the end of the descent, in the valley.

It was nearly 2 pm before we continued hiking, going across large snowfields marked only with the footprints of previous hikers. We gave up on trying to follow the trail precisely, instead figuring out where we needed to be and cutting our own path there (sometimes following the footprints, sometimes not). I found that if I just shuffled my feet, rather than actually taking steps, I could sort of skate down the hills, going much faster than if I had been walking, and not postholing into the snow. 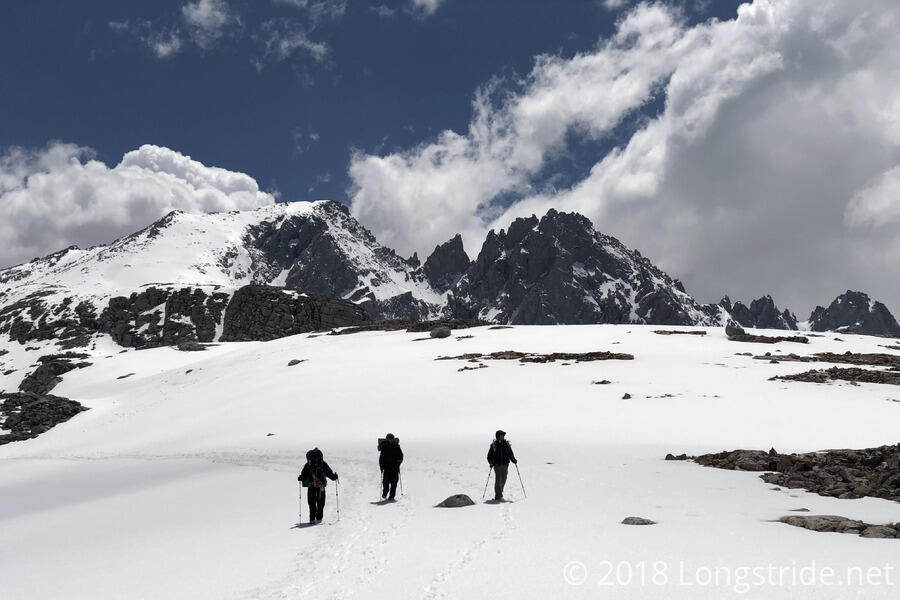 Flowers, Dylan, and Quoi hike in the cold, snowy wastes beyond Forester Pass.

The further we defended into the valley, the less bad the postholing was. Which is to say, it was still pretty awful, and Dylan kept losing his shoe to the snow, but it was better than it was when we started our decent.

Around 3 we stopped for another break. Nearly completely out of snacks (I needed the remainder of mine for tomorrow’s hike), I cooked a packet of Ramen. Quoi was essentially out of food, and I gave her one of my macaroni and cheese dinners to have tonight.

As we continued to descend into the canyon, we saw a cloud that looked like it might have been smoke from a fire. This was somewhat worrisome, since we didn’t really have anywhere to go but down, but as we continued to get closer, it became clear that it wasn’t a fire, and just a cloud rising up out of the valley. 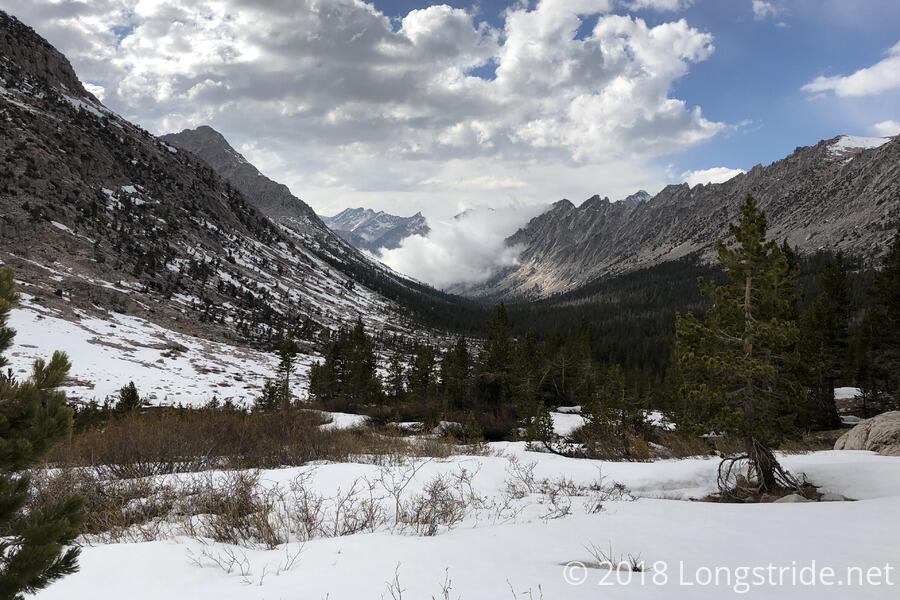 A Cloud Rising from the Valley

As we approached the tree line, the snow slowly got thinner, until it suddenly mostly cleared up as we crossed a stream just inside the forest. It was a welcome change of pace, and we immediately were able to start moving much faster.

We crossed Bubbs Creek, now a raging river from all the snow melt, and got our feet pretty soaked. Besides the creek, much of the trail was carrying water from all the snowmelt, but even with that and the snow piles that had not yet completely melted, we were largely able to keep our feet from getting more wet, and, aided by the warmer temperatures going into the valley, my shoes and socks were able to dry out a little (mostly due to the friction and heat caused just by walking in them). They were still wet by the time I got to camp, but it wasn’t an uncomfortable cold wet.

We got to Vidette Meadow around 7 pm, all fairly tired. We hadn’t even managed ten miles in our strenuous day. On the way there, we had considered stopping at the campsite, drying our wet stuff with a fire, and night-hiking to get a bit further up the next hill so that we could get into town sooner tomorrow. I pointed out that we were all exhausted now, and had been running on little sleep, and we would probably be happier and go a lot faster if we actually got some sleep and left early tomorrow morning. (I had been almost zombie-hiking for at least the last mile and a half, and so while I really needed food, I also really needed sleep to refresh myself.)

Now that we were there, we quickly realized that pushing on tonight would not be much fun at all, and we decided to wake up early and be hiking by 5 am, to make it to and over Kearsarge Pass early in the day.

Dylan and Flowers tried to get a fire started, and because of the humidity in the air and the wet firewood we were able to collect, it took them nearly two hours to actually get a fire going. We were able to get our shoes and socks a bit drier, but I don’t know that anyone actually got their stuff fully dried. For my part, I didn’t care if I got my socks completely dry, I still had two more dry pairs I could use for tomorrow. I wanted my shoes to be dry, of course, but I had to settle for not completely soaking wet.

Our campsite, situated in the valley between East and West Vidette mountains, had an excellent view of West Vidette, which I thought looked a bit like the mountain used in Paramount’s logo. 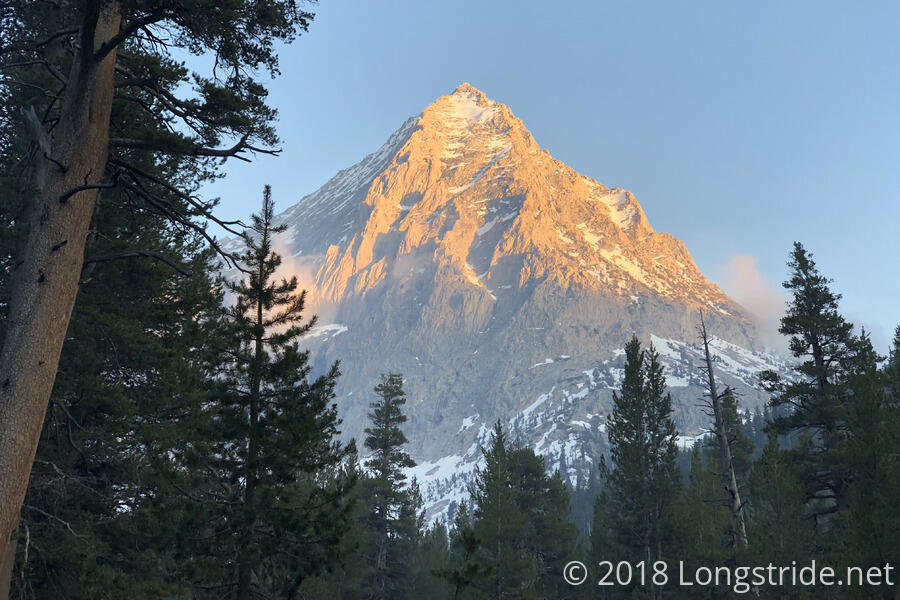 After running my sleeping bag’s zipper up and down a few times, whatever problem causing it to not stay zipped appeared to have fixed itself, so that saved me from having to try and find a way to get it fixed while I am in town.

On account of the fire taking so long to get started, we didn’t get to sleep until much later than we anticipated — I didn’t get into my sleeping bag until after 11 pm. That doesn’t bode well for tomorrow, but, at least the bed of pine needles we set our tents on is way more comfortable than the slanted rock we had last night.

Tomorrow: Hike out Kearsarge Pass to Independence, and then hitch to Bishop to stay at The Hostel California.

Pacific Crest Trail, 2018
« (Day 64: “The Postholing Stopped Being Funny After I Hit My Nuts”) Previous Entry
Next Entry (Day 66: A Temporary Reprieve from the Mountains) »