Two nights ago, I discovered while setting up my tent that I was missing one of my tent stakes. Probably, it got accidentally dropped or left behind at Vidette Meadow. This morning, when removing one of the stakes, its pull cord broke, and I had to dig it out of the ground to get it out. Good thing I brought two spares.

Despite our plan to hike towards Pinchot Pass at 4 am, we didn’t actually leave until 45 minutes later. Still, though, we set off as a group, continuing the downhill from Glen Pass with our headlamps on.

The early morning featured two major water crossings. At the outlet of Arrowhead Lake, Quoi charged through the water and took off ahead of us; I was a bit slower, taking my shoes and socks off and wading across the water in my Crocs. I left Dylan, Flowers, and Free behind; I think they stopped to have a “safety meeting” after the crossing.

At Baxter Creek, I again took my shoes and socks off and waded through with my Crocs. As I finished getting my shoes back on, Dylan, Flowers, and Free arrived. It was interesting to watch them cross; each of them took very different paths. Dylan found a mostly dry route via some elevated logs. Flowers waded through like I did. Free threw his pack across one channel of the creek and then jumped across.

I saw my first deer on the PCT shortly after leaving that creek. After crossing another (much smaller) creek, a deer stepped out of the woods into the small clearing around the creek, before spotting me and disappearing back into the woods before I could get my phone out to take a photo. 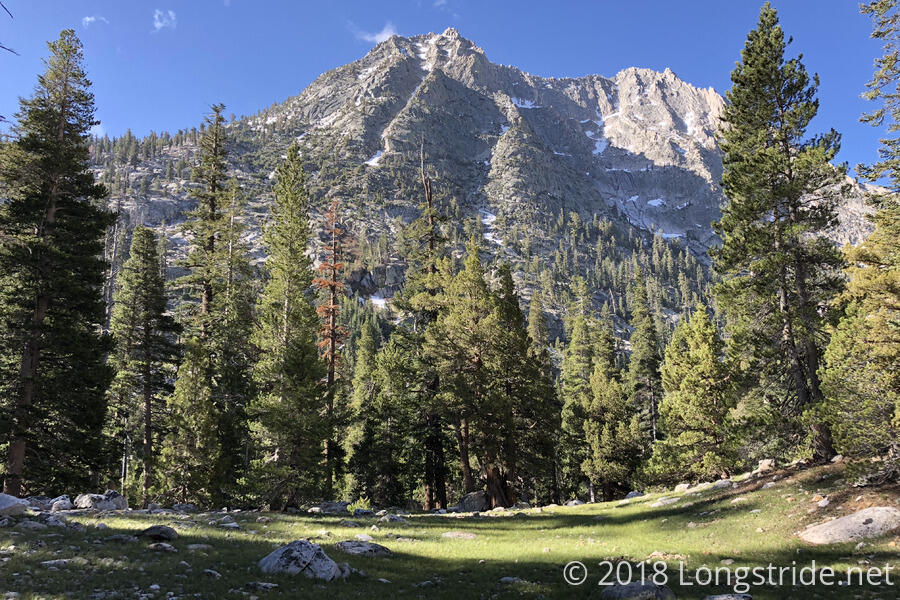 I also found a sock on the trail. Usually, I don’t pick up things I find on the trail (since I can’t know that they belong to a northbound hiker I’m likely to run into again). However, the last two times on the trail I found lost items, I picked them up, and they belonged to the next two people I saw (Happy Foot’s buff, and Flowers’ glove). For some reason, though, I neglected to pick the sock up.

Around 8:30, I took a half-hour break just before the suspension bridge over Woods Creek. Quoi had already hiked past; I waited for Dylan, Flowers, and Free to show up before continuing on. They indicated they were going to stop at the campsite we had originally agreed on (about 4.4 miles before Pinchot Pass), rather than going over the pass with Quoi.

Crossing the Woods Creek suspension bridge was a very wobbly affair. There is even a sign warning that only one person at a time should be on the bridge! The creek was pretty wide and fast-flowing at the bridge, so I was quite glad the bridge was there, even if I felt like I was still wobbling for a good minute after finishing the crossing. 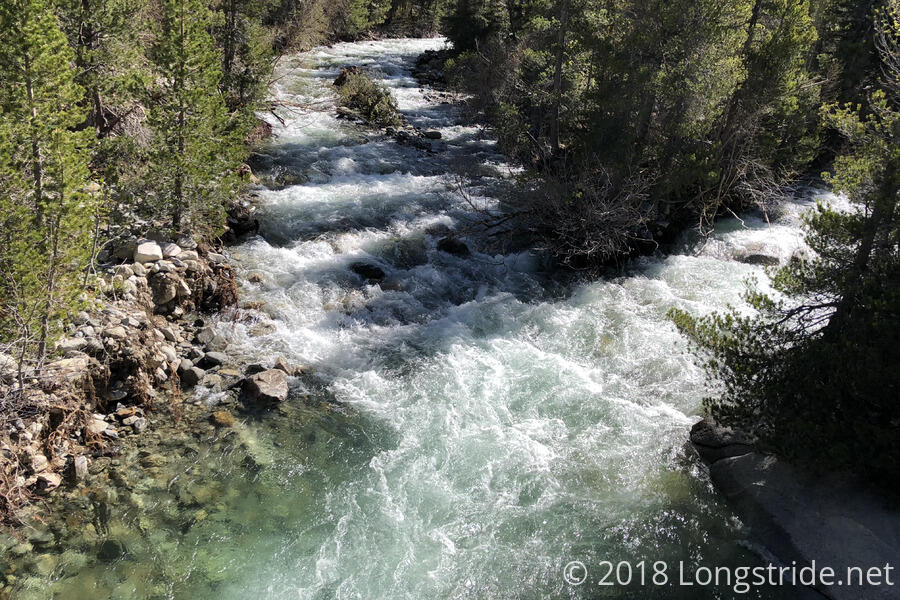 Shortly after the bridge, the trail passed 800 miles, though there was no marker. Then, the trail followed the creek uphill for about 2.5 miles. During that time, the creek was an almost continuous set of waterfalls, and I spent not a small amount of time watching them as I hiked up the hill. 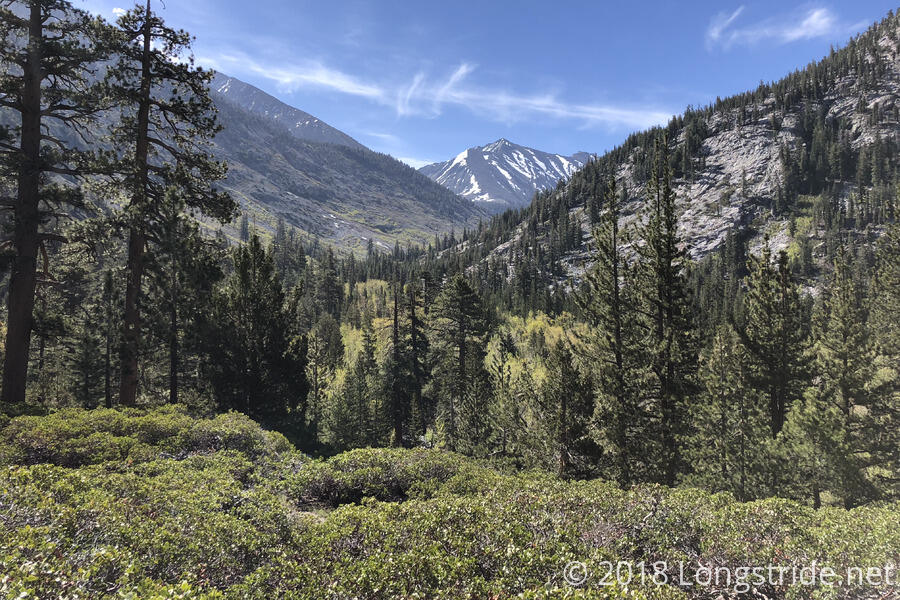 There were also several more creek crossings of various sizes. At one of them, I spent some time looking for a dry upstream crossing, before deciding that that wasn’t actually any drier or safer than the trail crossing, and got my feet (and socks and boots) soaked. I took a few minutes to squeeze the water out of them, though in retrospect, I’m not sure that was really the best use of time at that point in the day.

At some point in the day, when the trail was largely free of snow, I passed Quoi, who was sitting on a rock taking a break. She asked if I had seen the (brand new) sock she had lost, and I felt like an idiot for not picking her sock up when I had passed it. (We hoped that Dylan, a bit of a packrat, would pick it up and get it to Quoi whenever he caught up.)

Later, as the trail continued to climb and the snow began to resemble a snow field, rather than just small patches of snow on the trail, I took a break myself.

I continued to try and follow the trail through the snow field, but by this point, it was after 2 pm, and nearly every step was postholing. I was also having a difficult time following the trail, and reconciling the footsteps I was seeing (or not seeing) with where the trail was heading. Eventually, the postholing and lack of trail became more frustrating than I wanted to deal with, and I turned back to go to a campsite at a lower elevation.

Right about then, Quoi caught up, and continued on towards Pinchot Pass. I figured that if she could successfully make it to the pass, I could follow her postholes and do it as well. (In retrospect, I certainly could have done it myself, but I didn’t really want to hike through the snow by myself, just in case something happened.)

Quoi took charge of navigating us through the snow for the remainder of the day, and we alternately hiked through snow and took advantage of rock islands to make progress without snow and take short breaks. When going through the snow, often we’d follow other people’s tracks, but we’d occasionally forge our own route.

Finally, at 5:30, we made it to Pinchot Pass, and we began our descent down the mountain, going another two and a half miles to a campsite. Unfortunately, my phone’s camera decided to be finicky and stop working, probably from the cold, so I wasn’t able to get a photo from the pass itself, which was nicely scenic. 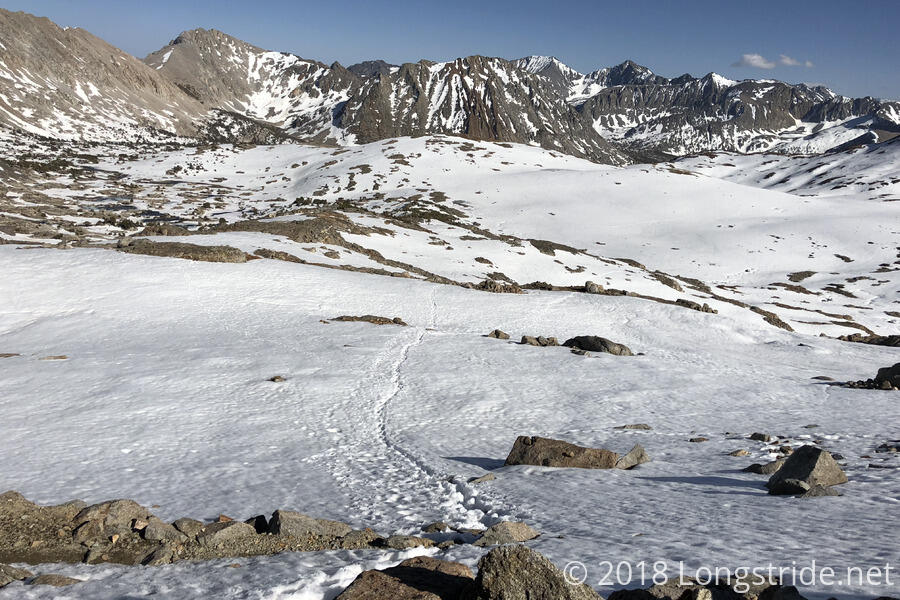 We passed by several campsites along the way for various reasons; some were buried under the snow; others weren’t large enough for both of us to tent, or for us to get tent stakes into the ground.

Quoi and I stopped hiking at a campsite adjacent to a mostly-frozen-over lake inhabited by a pair of ducks. We fairly quickly retreated into our tents to dry our feet, soaked by hours of postholing, and cook dinner.

Tomorrow, we tackle Mather Pass. About seven miles away, we plan to leave our campsite around 6.