Today got off to an exceptionally slow start for Muir Pass, which was not surprising given the long day both Quoi and I had yesterday.

I had a 4:30 alarm set, but I didn’t budge from my sleeping bag until 5. I ate breakfast, and collected some water from the creek to filter for today’s hike. By 6:15, though, Quoi was still sleeping, so I gave her a wake-up call, and then proceeded to take a nap until she was ready, since I was still tired from yesterday.

Nearly 8, Quoi and I were both ready to go, and Quoi left while I went to dig a cathole. It was a good thing I did, too (besides the obvious reason): I found a tick on my leg. Having packed my tick key away in the bounce box to Mammoth Lakes, I used the star-shaped hole on my trowel to remove the tick, which probably got on my leg last night while I was hiking through the dark with my pants legs rolled up.

I got started around quarter after 8, continuing downhill towards the Middle Fork Kings River, and then proceeding uphill along a path paralleling the river. A quite large river, the trail did not cross it until much later in the day. As with previous rivers, this one was also a raging series of waterfalls, and I was quite glad to not need to cross it yet.

I caught up with Quoi shortly after (she was taking a snack break on a rock), and kept going. Briefly, the trail flattened out, and the raging river turned into a gentle meander through a wide meadow with many deer frolicking about.

Further uphill, I stopped at a large rocky area overlooking one of the river’s many waterfalls, about six miles from where I started this morning. Feeling a bit tired and very hungry already, I felt this was a perfect opportunity to cook last night’s dinner, which would provide me with a lot more calories than my usual snacks, as well as noticeably lightening my load for the remainder of the uphill climb to Muir Pass. Quoi arrived not long after I started cooking, and she joined me for lunch.

We were there for nearly two hours, resuming our hike around 12:30. The trail continued uphill, gradually becoming steeper, though with a couple of flatish areas intermingled, and snow began to lightly encroach on the trail. 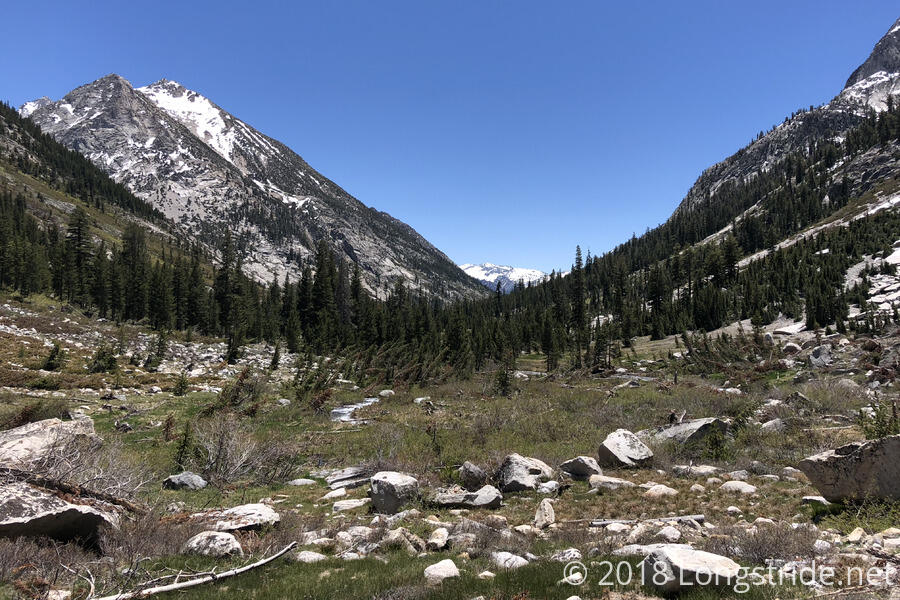 According to Quoi, Muir Pass is famous for having many miles of snow in both directions from the pass. For us, patchy snow began to appear on the trail about five miles before the pass. Another mile and a half later, the snow field appeared, coming almost out of nowhere. I felt somewhat fortunate that I was able to get as close to the pass as I did before having to deal with lots of snow. 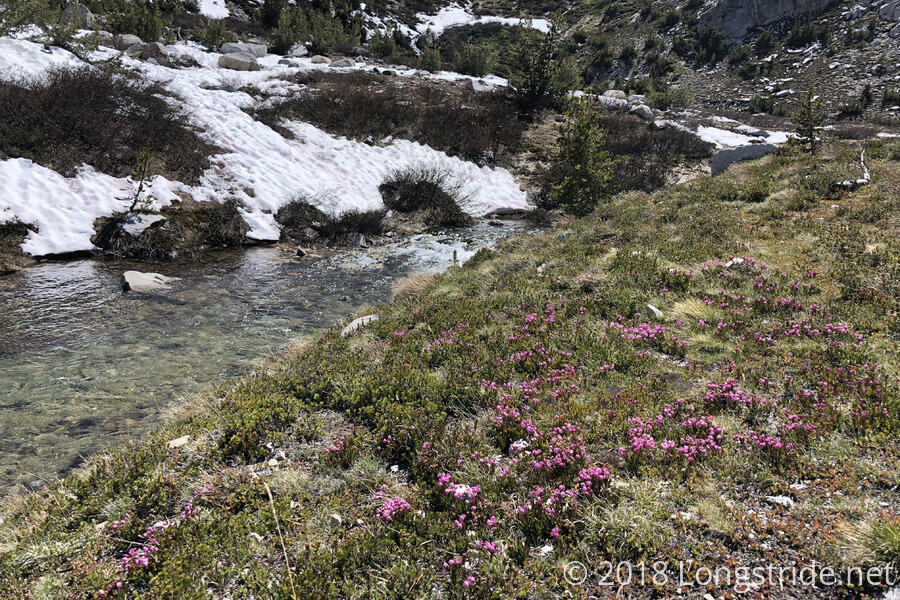 Fairly warm out, the postholing in the late afternoon was pretty bad, and around 4:30, I stopped at a rock island with two other hikers, MacGuyver and Einstein, next to the Middle Fork Kings River, which the trail had finally crossed shortly before. Still tired from yesterday, and still three miles from Muir Pass, I didn’t really want to keep hiking, especially if every step was going to posthole. There is a small shelter on the pass (meant for emergency use only), which Quoi was looking forward to sleeping at, but even in the best case, it would be at least three hours away.

Quoi arrived at our rock island about half an hour later, postholing nearly every step of the way. I asked her to consider staying with us at the rock island (where we’d have to cowboy camp, there being no way to actually pitch tents). She didn’t have to think too hard about it, and decided to stay (much to my relief, since I really didn’t want to continue hiking up to Muir Pass this late in the day, emergency shelter at the top or no). MacGuyver and Einstein were, of course, happy to have her stay, but after talking with her earlier in the day, they had also been somewhat looking forward to watching her posthole her way past the island and off into the distance. 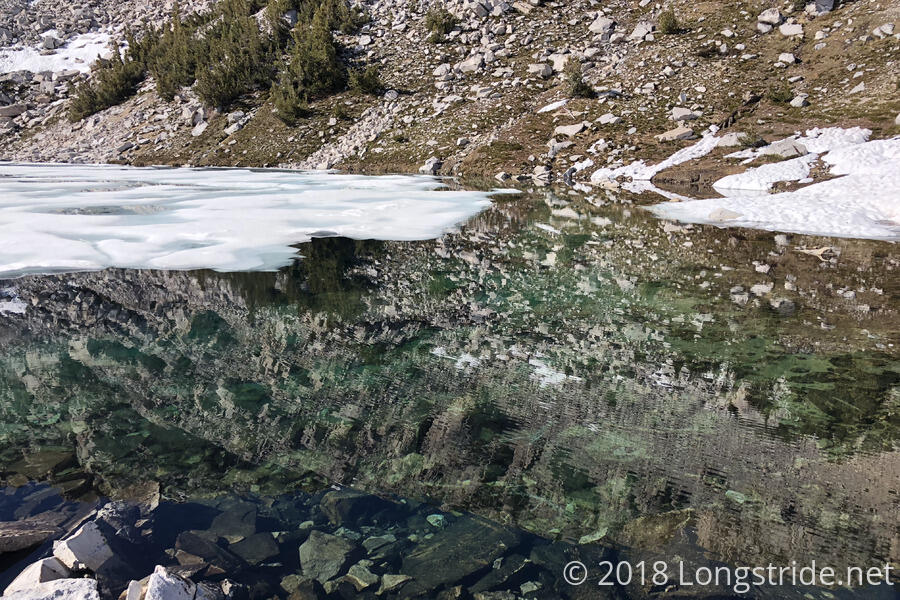 A Reflecting Lake — A lake on the Middle Fork Kings River.

A relatively early night, I was in my sleeping bag long before 9, fully cowboy camping, though without the benefit of Flowers’ tarp to trap in some heat. With the exception of a tree to my side, and the mountains in the distance, I have a completely unobstructed view of the sky, and I’m looking forward to seeing lots of stars tonight.

The rock I’m sleeping on, though not even close to being flat, was surprisingly less uncomfortable than I was expecting it might be under my sleeping pad, though I’m fully bundling up, actually wearing my fleece and instead using my clothes bag for a pillow to make sure I stay warm tonight.

The plan for Quoi and I tomorrow: no alarms. Wake up whenever, go over Muir Pass, and get as far as possible downhill to set up for going over Selden Pass tomorrow.