Though today was a “short” day from La Caldera to El Portillo, we got some great views of Spain’s tallest mountain, and set ourselves up for a long day tomorrow.

Our hotel room came with a free breakfast, served at 8 am. It was good, and then they served us a hiker-sized portion of scrambled eggs, which were actually really good for “free” breakfast food.

The timing also worked well with the bus we needed to get back to the trail, which was scheduled for 9 am. We absolutely needed to get this bus, because that was the only way we were going to hike to El Portillo (“The Gap”) and the visitor center for Tiede National Park in time for the last bus down the mountain to Vilaflor at 3:20 pm. Our guidebook suggested the 13.5 km (8.25 mi) hike would take five hours, which would give us a little less than an hour of leeway to get there before the bus. Which meant that CareFree was a bit nervous while this morning’s bus was late getting to the bus stop, ultimately arriving about ten minutes late.

When we got back to the trailhead, it was, in my view, the best kind of windy. You could hear the wind roaring above the trees, and they were swaying, but at ground level, there was just a light breeze keeping everything fresh, with the occasional slight gust to remind you that, yes, It Is Windy.

Starting off where we stopped yesterday, the trail headed downhill for a short while, and bounced around for about an hour and a half. 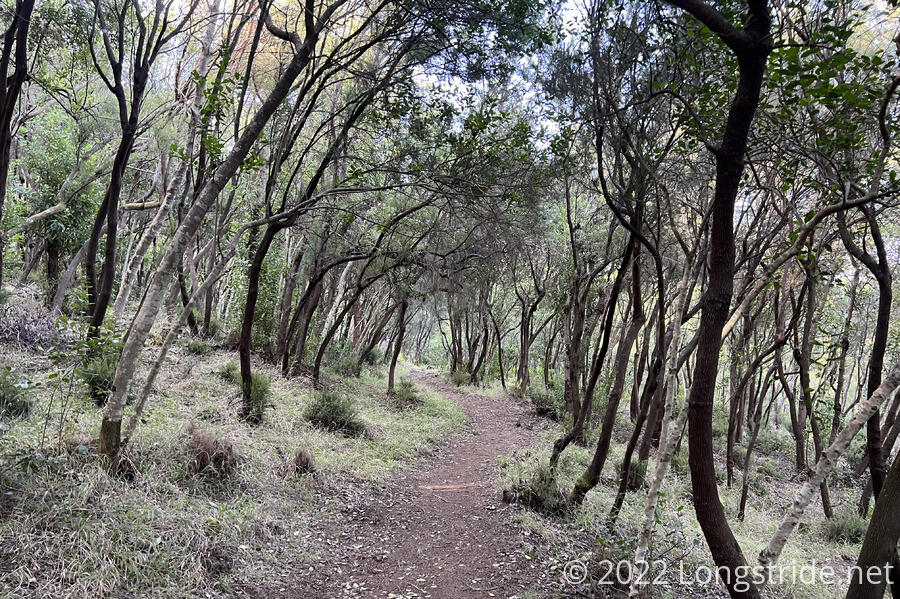 At one point, the trail exited the forest and traveled along dirt roads in a farming area for a short while. A horse in a field turned towards us and eyes us suspiciously as we passed, then returned to eating grass and ignoring us. We also got our first view of the day of Teide, which was much improved over yesterday: we were closer, so it was a bit larger, and also the air was much clearer, so it wasn’t hazed out. 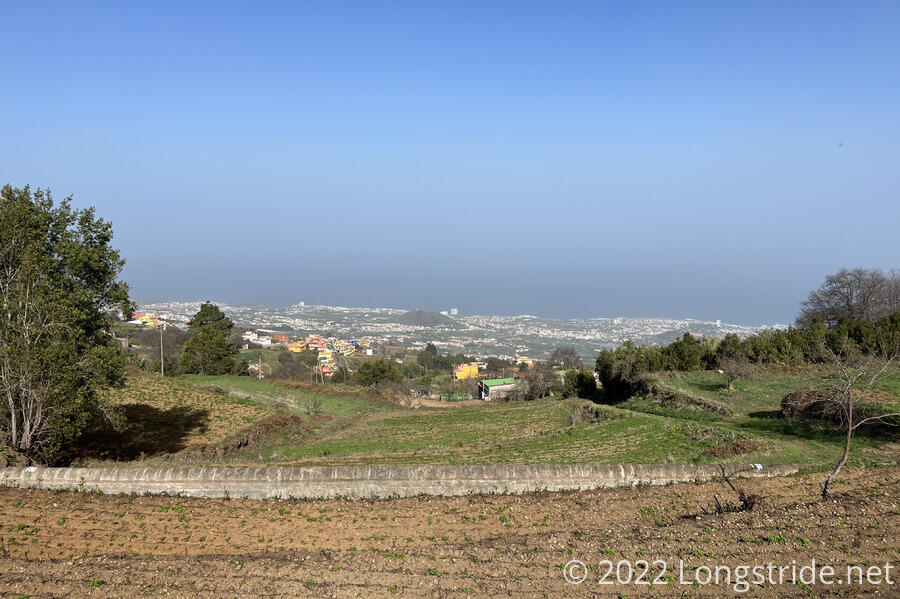 Just before the trail turned uphill in earnest, it took us to a covered picnic table, as if to say, “rest now, this is your last chance”. Knowing it was going to be uphill from here to the end of the section, we decided to take the trail up on its offer of a shaded rest area, and stopped for lunch.

Right after leaving the picnic area, caution tape was strung up on the left side of the trail, and we could hear chainsaws in the distance. This was the first forestry work we’ve seen (or rather, heard) so far this trail.

As we climbed further, the trail’s tread gradually got more rocky, the rock gradually became more volcanic, and the forest began to thin. 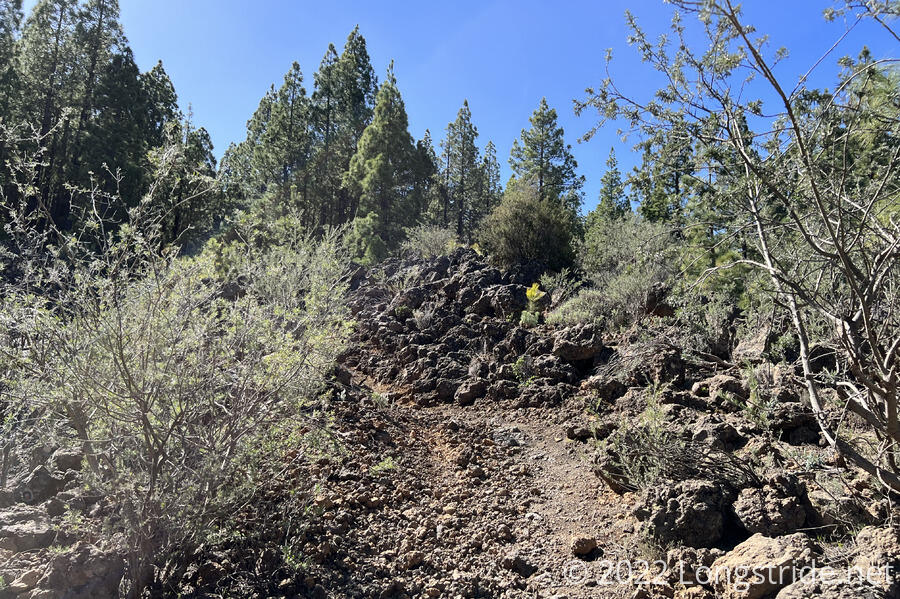 With the more rugged trail came a more rugged landscape. Deep valleys cut by erosion were on both sides of the trail, as it climbed between them and wound its way up towards Teide.

The change in scenery as we reached the tree line was very dramatic. The forest thinned almost all at once, and it felt like we were in an altogether different place. The trees were replaced with short shrubs, and the exposed rock (which, of course, originated in lava) didn’t look like the rugged lava rock from just a short distance back; everything looked smoother and more worn down. 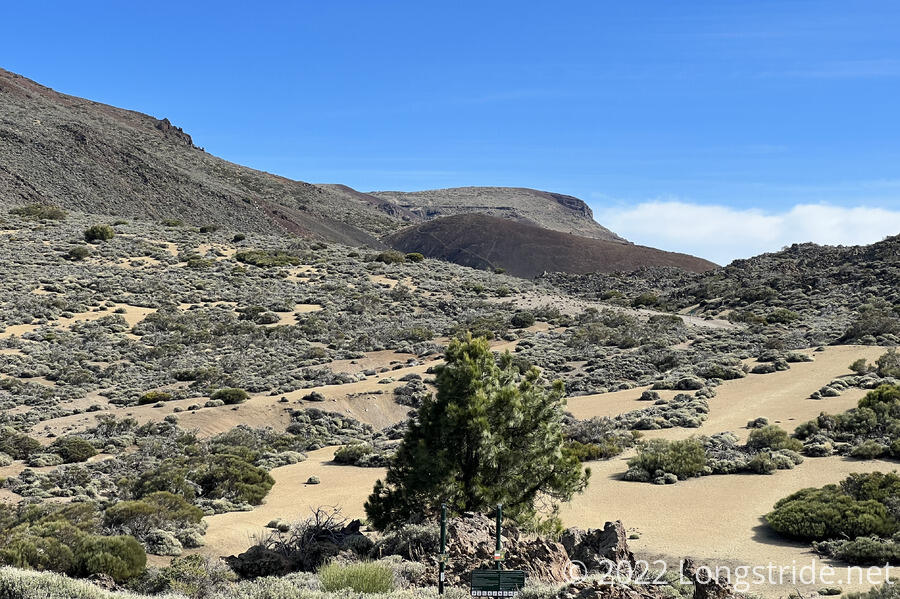 Shortly after crossing the tree line, we reached the boundary of Teide National Park, and shortly after that, the road crossing at El Portillo. With over an hour to kill before our bus (we completed our “five hour hike” in four and a half hours), we walked to the park’s visitor center, which had several informative displays on the formation (and possible fate) of the Canary Islands. 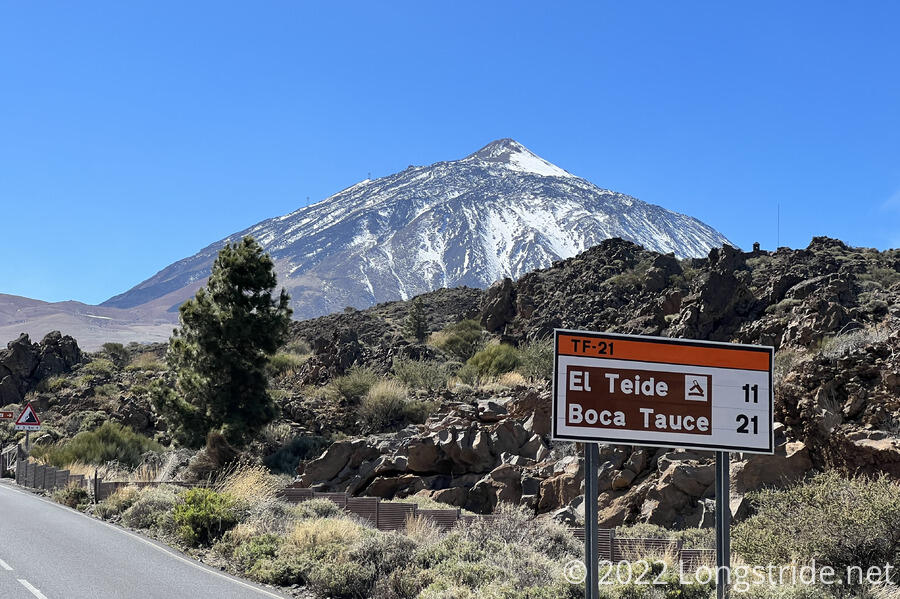 Ideally, we would have been able to keep going up the mountain, to the Refugio Altavista, and then summit the mountain and come down the other side the next day, but the Refugio is closed due to covid, and with snow on the mountain, it seemed like it’d be a bad idea to try anyway. (But, now we have a good reason to come back later!)

After exhausting the visitor center, we went outside and waited for a bus. Though it had been a bit windy once we made it up to the tree line, since we were waiting and not hiking, it started to be a bit cold, and we had to put on an extra layer to stay warm. (This was no longer the best kind of windy, it was just plain old windy.)

After a bit of a wait, we got a bus that took us on an hour-and-a-half ride down steep and curvy roads to the town of Vilaflor, which would be our base for the next two nights. (We selected it because it is on the trail, and we will hike from El Portillo to Vilaflor tomorrow.) Along the way, we got quite a lot of incredible views up at Teide, and we could see multiple distinct lava flows from the mountain.

We were also able to see the silhouettes of La Gomera and La Palma, the next two islands we will visit. 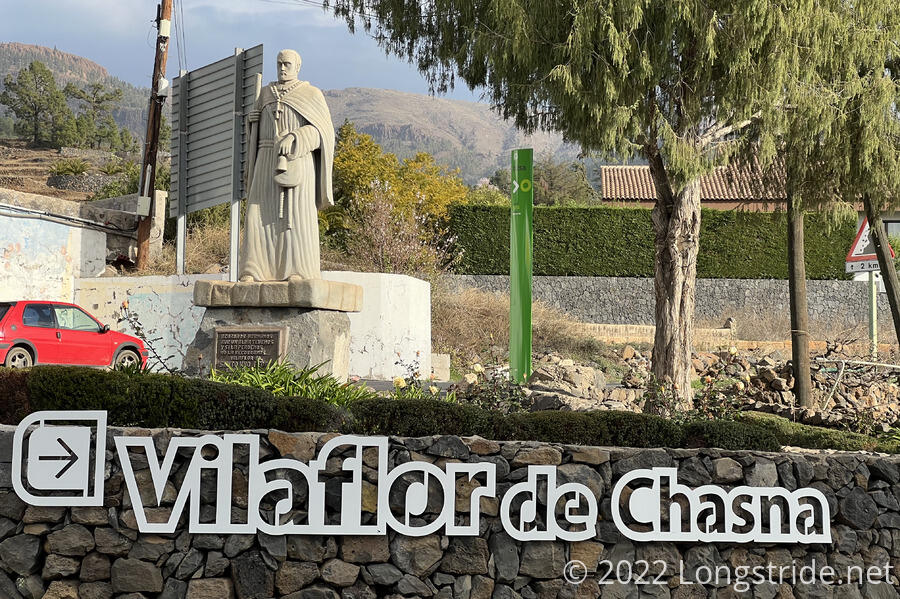 Vilaflor de Chasna — A statue near one entrance to Vilaflor.

We arrived in town shortly before 5 pm and walked to the apartment we’d rented, only to discover that the booking had been canceled because the owner had tried calling CareFree and, being unable to reach her (because she was using an old phone number and also because CareFree’s phone is in airplane mode most of the time), canceled the booking on the assumption that we weren’t coming.

Fortunately, we got it straightened out, and because the owner was currently out of town, they were able to get someone else to coordinate getting us into the unit and getting our money.

After resting for a bit, we wandered around town looking for food. The first couple of places we tried were closed or closing, but we finally found a place.

We ordered food, including a tapa of the papas arugadas, but the potatoes were disappointing. They tasted like regular potatoes, and the sauce was lacking something essential from the sauce in Gran Canaria. (The service was also disappointingly slow, and I actually had to go inside and find the server in order to get the bill and pay.)

We went to a “supermarket” that had an extremely limited supply, but we were able to get enough for tomorrow’s breakfast and hike.

We also took the opportunity to plan our next island, La Gomera, and got everything arranged for the trip there and hotels. And, quite importantly for me, I got the most important part of my upcoming Continental Divide Trail hike set: the shuttle to the southern terminus. But, more about that after this hike is over.

Tomorrow: A long bus ride back to El Portillo and a long hike back to our apartment in Vilaflor.