Today, we hiked up and over the high point of La Gomera, Alto de Garajonay, in a complete reversal of our two-day plan for La Gomera.

For reasons that are not entirely clear to us now, CareFree and I had originally decided to hike La Gomera “backwards”, starting today by taking a bus to Vallehermoso, hiking to Chipude a bit less than halfway, taking a bus to the port town Valle Gran Rey and staying there overnight, and then tomorrow bussing back to Chipude and hiking back to San Sebastián. (We think maybe it was due to a combination of bus and ferry schedules to get to La Palma.)

However, when we went to the bus station this morning, we found that the bus we expected to get at 9 am didn’t exist; the next bus was at 10:30 am. We didn’t want to wait around an hour and a half before going anywhere, and that delay would get us to Chipude and Valle Gran Rey far later in the evening than we’d have liked.

So instead, we decided to start hiking from the bus station, and just do La Gomera in its proper order. This meant that today, we were hiking all the way up to the highest point of La Gomera, Alto de Garajonay, and then part of the way back down. Not what we were planning, but then, no plan ever survives a thru-hike.

It was sunny, mostly clear, and definitely a bit humid, as we started our climb away from the port and up the steep streets of San Sebastián. The sun and humidity made it harder than we’d have liked, but we did have one advantage: we had only half the contents of our packs with us. Since we planned on coming back to San Sebastián tomorrow, we arranged with our hotel to let us keep the gear we were carrying that we didn’t actually need (that is, most of it) in their bag check room until we got back to town tomorrow night. Instead of hiking back to the hotel, though, we’d be arriving by bus.

Seemingly the whole city apart from the area around the port was built into the side of a mountain, which made the streets ridiculously steep. (And with heavy packs, steep streets are harder to hike uphill than steep trail, because trekking poles just don’t work as well.) After a few street-based switchbacks, we finally left the city and began hiking on a trail, at least for a while.

We were very happy to discover that kilometer markers, first (and last) seen on Lanzarote, had returned for La Gomera. This made it easy to track our progress, and served to give us a little boost when we were flagging due to the heat and humidity.

About ten or twenty minutes outside of town, we passed someone next to the trail with all their gear spread out; we got the distinct impression they had camped there, and (now that it was after 9:30 am) were having a very late start. 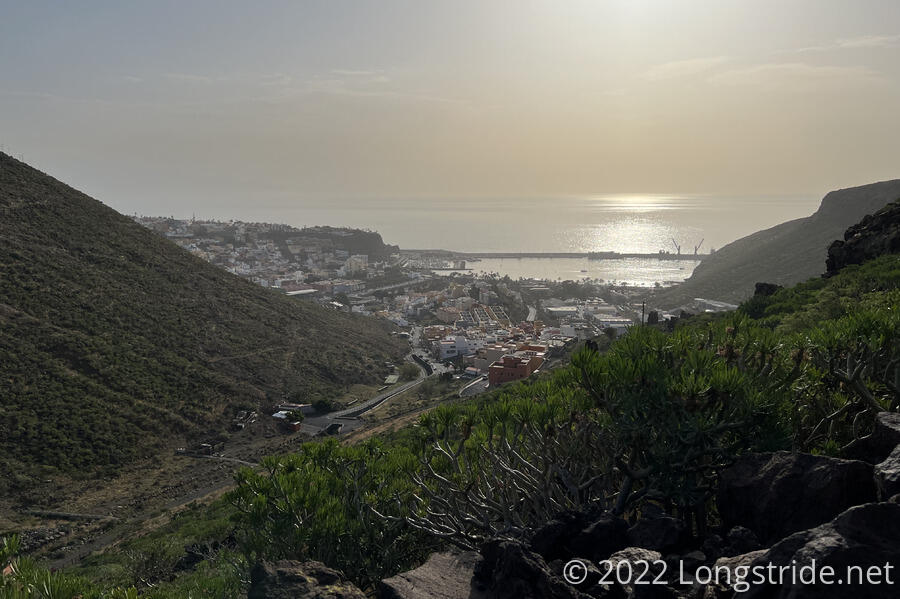 Possibly due to the warmer temperature and higher humidity, and possibly also due to us not having much in the way of breakfast today, we (especially CareFree) were a bit sluggish this morning. I’m sure starting off with a steep uphill didn’t help much either. We stopped for a much-needed break behind a knee-high rock wall adjacent to the trail for a tiny bit of shade and a snack, and the extra food helped to re-energize us.

As we gained in altitude and distance from San Sebastián, though, the landscape became greener, with fewer desert plants, and far more interesting. An information display later in the day described La Gomera’s landscape as a “giant fruit juce squeezer”, and with all the folds and ridges and valleys, and it was not a bad description. 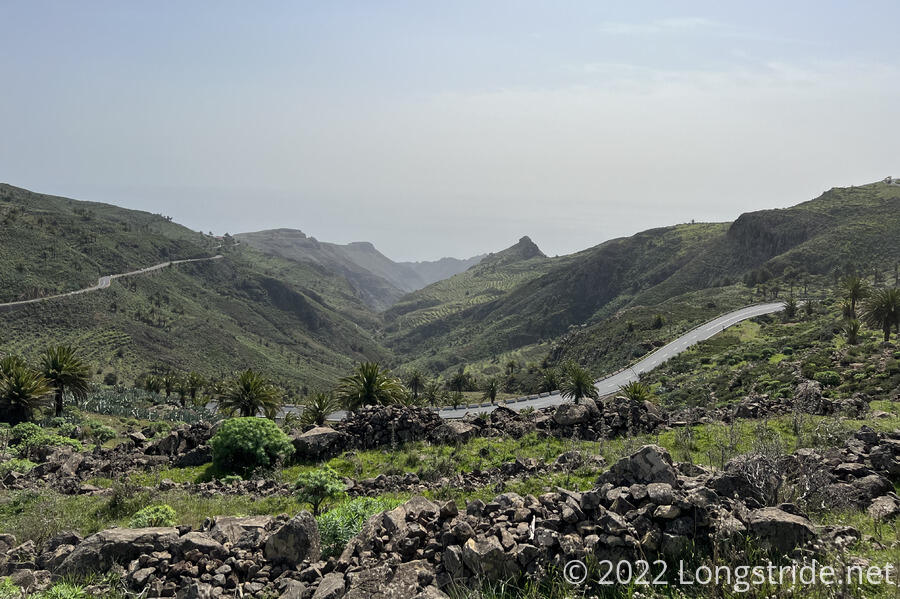 A road winds its way through the mountains of La Gomera. Farming terraces can be seen on both sides of the valley.

In spite (or rather, because of) the steep mountains, which limited the available land for farming, many mountains had terraces cut into them to increase the total farmable land. We’ve seen them before on Gran Canaria and Tenerife, but here on La Gomera, there’s so little flat land that terraces were clearly a necessity. I can’t even begin to estimate the amount of work it took to make (and maintain) the terraces.

As we ascended, the trail which cut on and off of paved roads and followed old dirt and stone roads gave way to narrow mountain paths amid steep and deep valleys. The landscape was some of the best and most impressive I’ve seen on any of my hikes so far.

The trail follows a narrow pathway — eventually with a wooden fence — along a steep drop into a deep valley.

When the trail took us back to the road it had been vaguely following since we left San Sebastián, we took a short detour in the opposite direction to a bar-restaurant, and got our traditional ice cream and soda snack. Given the warmer temperatures than we’d been used to so far, the indoor shade and the cold sodas and ice cream very much helped improve our morale. (As if the scenery wasn’t enough!)

A bit further on, the trail took us to the Ermita de Las Nieves, originally built in the 1500s, and now used as a complex of day shelters, picnic areas, and a children’s playground. Easily a dozen other day hikers were stretched out on many of the benches. My suspicion was that, at roughly 12 km and 1120 m altitude (7.5 miles, 3675 ft) from San Sebastián, this represented a good (and strenuous) hike for most people, and they probably started hiking from San Sebastián at an earlier hour than we did, so the sun would be lower and the air cooler, and were waiting here for a bus back to town.

This, however, wasn’t quite halfway to our destination, so we kept going, and were quite pleasantly surprised to find ourselves under significant tree cover very shortly afterwards. This greatly reduced the temperature, and made for nice hiking, even as it was still very uphill.

The trail enters a forest amid volcanic domes.

Poking out of the forest briefly, we were treated with views of a series of volcanic domes, culminating with the majestic Roque de Agando. The domes were made by thick lava that filled volcanic fissures without erupting, and then solidifying. They remain despite five million years of erosion that wore down the rest of the rock that contained them. 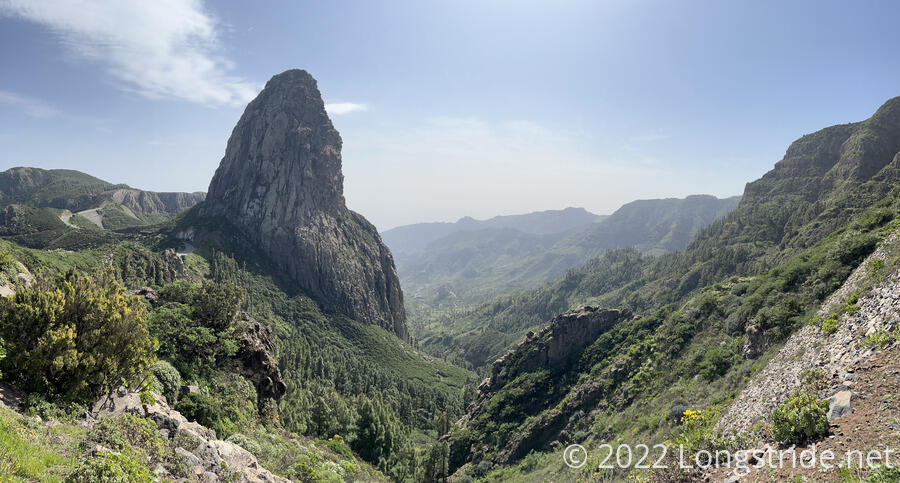 We continued ascending the island, and after another snack break at a view, continued on to the highest point on La Gomera, the summit of Alto de Garajonay. At 1485 m (4875 ft), it wasn’t the highest we’d been in the Canary Islands (so far, the La Cañada caldera on Tenerife was almost 2,000 ft higher), but it was the highest point on this island, which also made it both the highest mountain I’ve summited in the Canaries, and the highest island summit I’ve reached. Alas, the view from atop Garajonay was not particularly impressive, given the landscapes we’d seen on our way there.

Departing the summit, the trail headed down the other side of the mountain first on a stone road, and then on wide dirt roads that were not terribly steep. It was the “easy” way to reach the summit. After a series of switchbacks and passing another Ermita, we returned to trail. Passing near a farm, we encountered a flock of a dozen or so chickens on the trail. They weren’t terribly pleased to see us, and after much clucking and running down the trail, they all finally hid in the bushes adjacent to the trail, allowing us to pass. 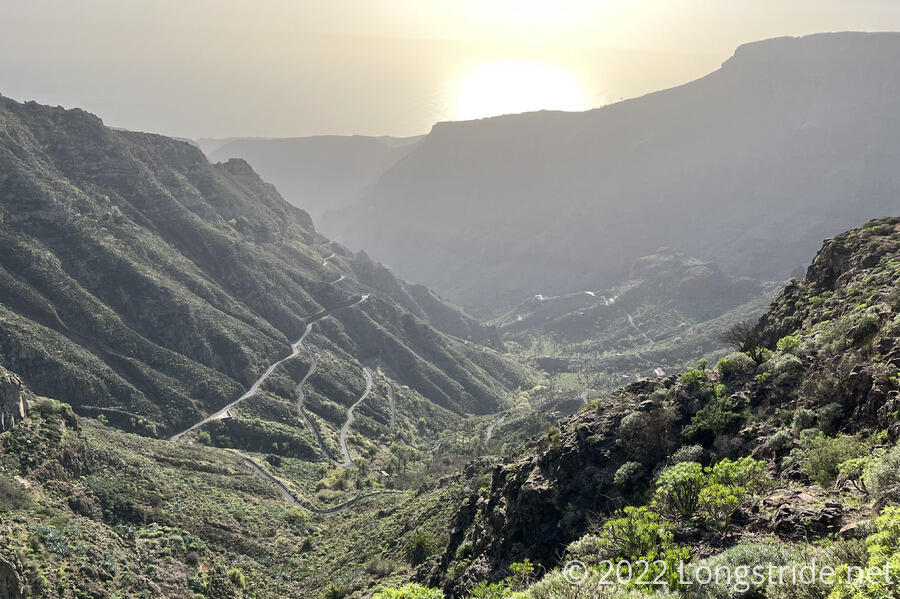 Sunset Over a Mountain Valley

The trail wound on through the mountains, and around 6:15, we reached a bus stop on the outskirts of Chipude. After contemplating what to do there (Wait for a bus? Call a taxi?) for a few minutes, we decided we were unsure that this was actually the bus stop we wanted to get to Valle Gran Rey, and continue hiking towards the center of town. When we arrived at the town center, we found a bus stop with several other hikers waiting (a good sign!). Across the street was a supermarket and also the Bar Hotel Sonia, which we’d seen mentioned in the guidebook, but had passed over when we couldn’t find it on the hotel booking site CareFree uses. On a lark, we went in and checked to see if they had any rooms available; they did — one left!

Already relatively late, we decided to take that last room, abandoning our reservation in Valle Gran Rey. (What we lost there, we gained in not having to spend time going into town tonight, or catching the bus back to Chipude tomorrow; we can start hiking immediately tomorrow whenever we went.)

We also got dinner at the hotel’s restaurant, and it was fantastic. (The potatoes, though, were ordinary, and the sauce lackluster. Whatever they did to the potatoes on Gran Canaria has yet to be replicated on the other islands.)