Our last day on Tenerife took us from Vilaflor to Arona, as we completed the GR131 on our fifth island.

We had only an 18 km (11 mile) hike to complete the trail on Tenerife, but CareFree and I had a bus to catch to the ferry port, and a ferry to catch to La Gomera, so we didn’t have much time to spare, and we left Vilaflor a little before 8:30.

This timing meant that we passed directly in front of Vilaflor’s church’s front door right at 8:30, just as its really loud half-hour chime rang, startling us. Given all the churches we’ve hiked past so far in the Canary Islands, it’s actually a little surprising this hadn’t already happened.

The Sun Rises Over Vilaflor

The hike out of Vilaflor started with steep paved roads, leading us uphill and west. After the trail left the paved roads behind, we transitioned to dirt road, and then trail, and we started to make our way downhill.

As we descended, we went through a burn area. At the same time, the trail multiplied. Rather than there being just one track, there were nearly always two or three (or even four) possible routes. My initial thought was that someone had decided this was a great area to practice trail building. It’s also possible that the “extra” trails were fire related; either built as fire breaks, or drainage channels for water. Also likely is that at least some of them are mountain bike trails, giving the bikers something steep without ruining the main trail tread. The true answer is known only to the trail maintainers.

In contrast to yesterday’s trail, the trail so far today seemed somewhat lacking in marking and signage. Likely this is a result of the fire, and markers haven’t yet been fully restored. Naturally, when I verbally commented on this to CareFree, we immediately walked past a trail marker. (I consider it a sign that the maintainers actually hike their trail when a trail marker shows up just when you think you’d like to see one.)

We finished descending through the burn area and joined another dirt road, which led us over an old stone arch bridge over a gully. 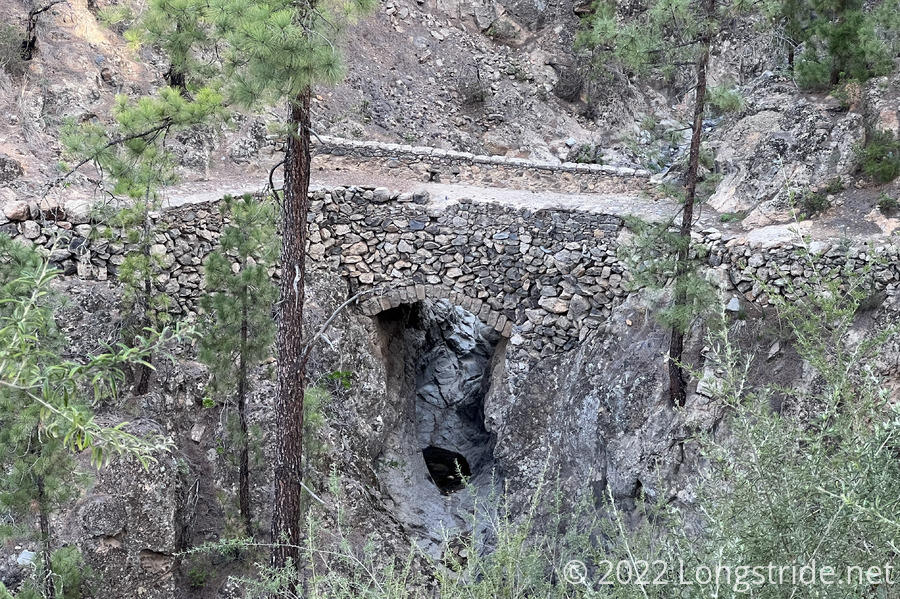 Briefly exiting the forest, we went through a very tiny village. It seemed to have one business, a bar-restaurant that was closed on Thursdays. (Today was Thursday, so, no ice cream and sodas for us!)

Just before the village, we passed a heart-shaped stone that someone had painted. Just after town, we passed an old threshing floor, a large flat circular stone base used for threshing grain. 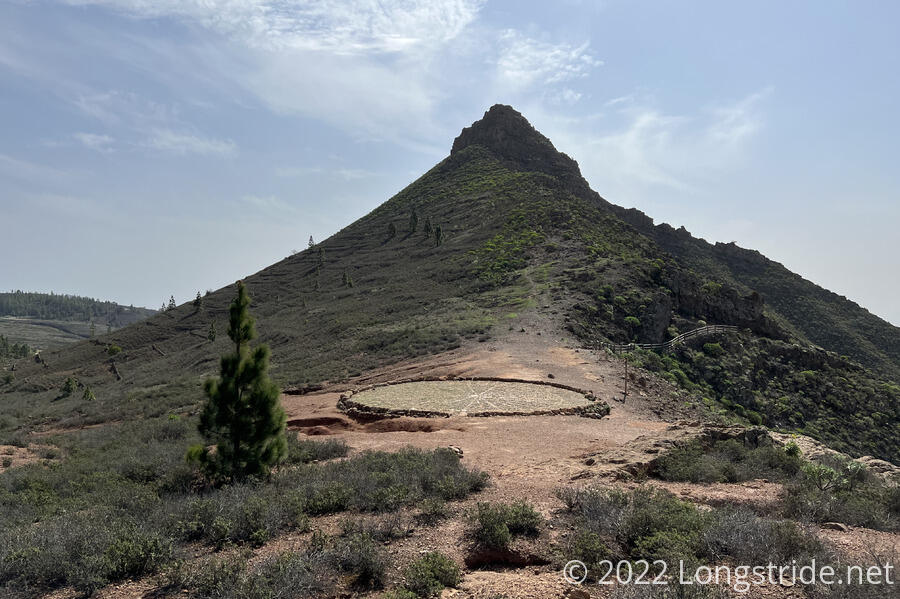 Past the threshing floor, the trail followed a steep cliff as we steeply descended on a rough and rocky trail. Occasionally, we got faint views of our next island, La Gomera, off in the distance.

Roque del Conde with old farming terraces. The port city of Los Cristianos sits sandwiched between the mountain and the ocean. La Gomera is faintly visible in the distance, obscured by haze.

As we approached the town of Arona, the trail took a wide meandering course around a protected area on the outskirts of town, eventually leading us to a steep stone staircase and a short roadwalk to the end of the GR131 on Tenerife. One day, maybe, the trail will continue on to the port in Los Cristianos, but since the trail doesn’t now, we don’t need to hike to the port. Instead, we take a bus there.

Arriving at the bus stop with a little time to spare before our bus, we grabbed ice cream and soda from a nearby bar, and ate our snacks at the bus stop. Our bus arrived a little bit late, but we got to Los Cristianos with just enough time to walk to the port and get in line for our ferry to La Gomera.

The ferry arrived at the port in San Sebastián on La Gomera shortly before 5. As we got off, we were surprised at the length of the line of people waiting to board. It was easily as long as all of the other ferry lines we’d seen combined.

We quickly checked into our hotel, a short walk away from the port, got dinner at a fantastic local restaurant, and finished planning for our next island, La Palma.

Tomorrow: We begin our hike on La Gomera, hiking from Playa de Vallehermoso to Chipude.