Today was a short hike, from the Faro de Fuencaliente up the mountain to the town of Fuencaliente. Almost more importantly, we figured out what our plan for La Palma would be, in light of the trail closures we learned of yesterday.

With only 7 km (4.5 mi) to hike today, and the tourism information center not open until 9 am, CareFree and I had a lazy morning, and didn’t even get out of bed until near 8 am.

After a “breakfast” sandwich to use up extra bread so it wouldn’t go stale, we paid a visit to Fuencaliente’s tourism center, a cute little building next to the bus stop clad in volcanic rock. There, a very helpful staffer explained to us everything we needed to know but weren’t able to find out online on our own. Which was, due to last year’s volcano, part of the GR131 on La Palma is closed, and a few possible places to overnight on the trail are also closed. Specifically, the trail south of Fuencaliente was open, but north of town, it was closed for about 23 km (14 miles), to the shelter at El Reventón. But, she gave us ideas for options, and we decided to let that information percolate in our brains while we did the section we’d planned to do anyway today.

On our way back to our room to get our packs (stripped down to just what we’d need for a short couple-hour hike), we stopped at a food store to get lunch materials, and returned to the bus stop next to the information center to get a bus down the mountain to the Faro de Fuencaliente.

The bus ride was uneventful, though the descent from Fuencalente’s elevation (699 m, 2300 ft) down to sea level was a reminder that we were going to have to hike all the way back up. A local musician with sheet music practiced piano finger positions (and occasionally humming his music). The bus took us through a large banana plantation. Near the end of the ride, I briefly fell asleep, which did not do wonders for my energy level when we started to hike. We got off the bus right around noon, and after wandering around the lighthouse area briefly, we began our trek back uphill, stopping after not even half an hour for a lunch break since we (and especially me) were really low-energy today. 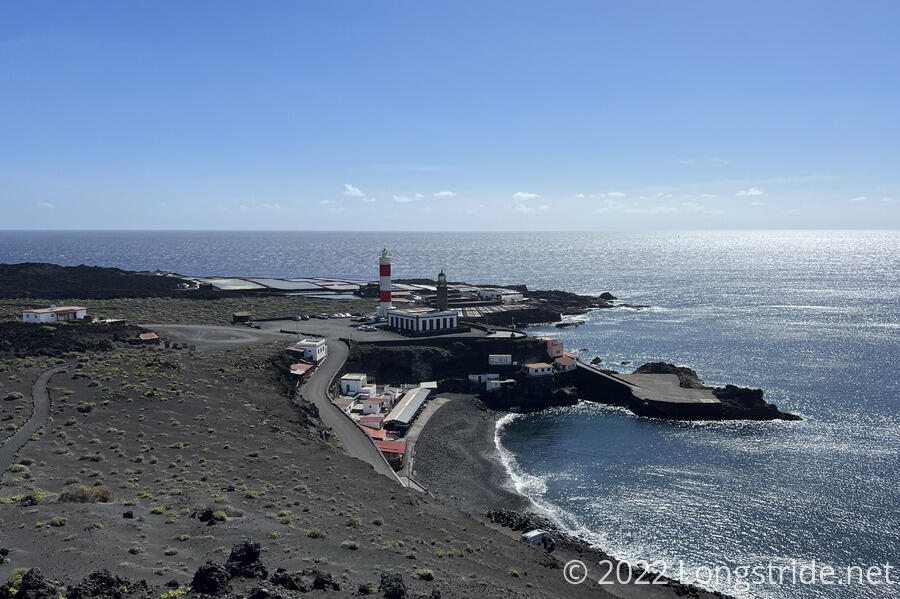 Faro de Fuencaliente — There are two lighthouses; the first was damaged during an earthquake in 1939, and after restoration, further damaged by a earthquakes and a volcanic eruption in 1971, so a second was built and opened in 1985. Salt ponds are visible just beyond the lighthouses.

The trail today is part of the Ruta de los Volcanes, a route up the middle of La Palma, over the ridge of the Cumbre Vieja volcano, passing many volcanic vents on the ridge. An annual ultramarathon, the Transvulcania, also follows the entirety of the GR131 (and also adds on a small section of the GR130 trail, which circles La Palma). As befitting a Route of the Volcanoes, the landscape was indeed quite volcanic. The trail today almost universally consisted of black volcanic ash or rock. 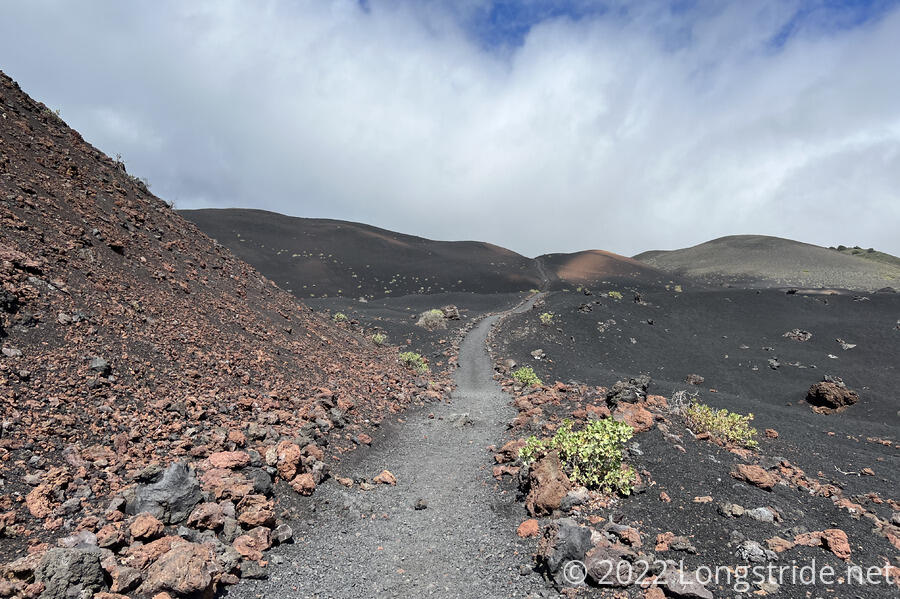 Volcanic Trail — Volcanic trail, representative of a large portion of the trail today.

On our way up, we took a side trail to Volcán Teneguía, one of the vents on the Cumbre Vieja, which was last active in 1971. Even fifty years later, there wasn’t much in the way of plant life on the mountain; we counted only a handful of plants near the trail. Evidently, the area closer to its summit is still considered hazardous; a sign prohibited following the trail more than about a third of the way up the mountain. 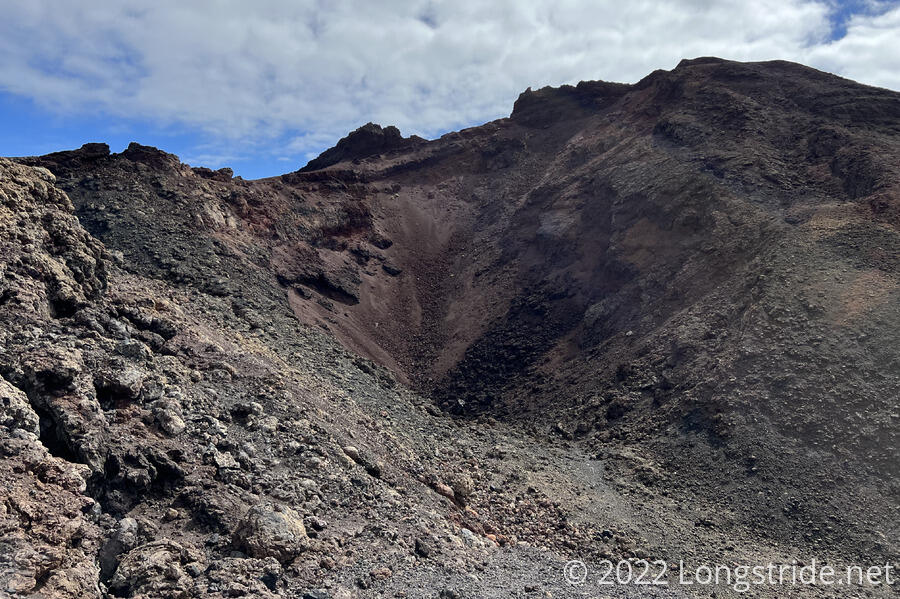 Volcán Teneguía — The Teneguía vent of the Cumbre Vieja volcano.

We returned to the trail from Teneguía, and stopped for a second break where the side trail split off. A crow landed on a rock nearby, and sat there for a few minutes until I opened a bottle of soda; the sound of gas escaping the bottle scared it away. We were there ourselves for a good half hour or so, only leaving when we did because the clouds that had been gradually blowing in over the last hour started to drizzle on us.

As we continued to make our way back to Fuencaliente, the trail joined a dirt road, and we passed a group of workers building a short safety wall along the downhill side of the road. This was the first time this trail we saw anyone doing trail maintenance work. (Though, I hesitate to call them “trail maintainers” in the sense of US trails, where most trail work is done by volunteers affiliated with a trail maintenance club. This was almost certainly regular road maintenance.)

What “should” have been a 2.5 hour hike turned into a 3.5 hour hike due to our lethargy, and the rain didn’t really help speed us along like it normally does. But with our clothes already damp from the rain, and with our hostel having a washing machine (though, no dryer), we decided it was long past time to wash our clothes. (The last time we had clean clothes was when we left Gran Canaria.)

Still raining out, I paid a visit to a grocery store to get pasta for dinner and sandwich material for tomorrow, and over dinner, we hashed out a new plan for La Palma. We also set out a plan for El Hierro, our final island, and reserved a place to stay.

Tomorrow morning, we take a bus back to Santa Cruz de La Palma. From there, we get a taxi ahead on the trail, near Roque de los Muchachos, the high point of La Palma, and hike back to El Reventón and take a side trail off the ridge and down to a park visitor center, where we can get a bus back to Santa Cruz. Then the day after, we go back to Roque del los Muchachos and hike to the end of the trail at Puerto de Tazacorte. That’ll give us all of the GR131 that’s open.