Today, we skipped ahead over a section of closed trail and continued our hike of the GR131 on La Palma.

After sleeping in a bit longer than we intended, CareFree and I rolled out of bed after 7 to catch a bus at 8 to take us back to Santa Cruz so we could get to our next section of trail. We managed to get to the bus stop with a few minutes to spare, and our bus was about five minutes late, which gave me enough time to gulp down four small packages of yogurt. (It was two packages too many, but it was the only food we had handy, and I was hungry.)

After the rain yesterday, it was bright, sunny, and clear out this morning. So much so that we were able to see our next and final island, El Hierro, for the first time.

The bus dropped us off in Santa Cruz where we left two days ago, at the bus stop opposite the port. We got a breakfast omelet (and coffee, for CareFree) from a small hut nearby (cheap, and fantastic!), then had a brief chat at the the tourist info center, and got a taxi to a trail near Pico de la Nieve, which brought us back to the GR131, albeit about a day and a half north of where we left off yesterday. (It was also not quite as far as we’d planned on going, which unfortunately sets us up for a long day tomorrow.)

There is pretty much one ridge on the island, running up the middle of the island from the south, and then circling most of the way around around Caldera de Taburiente, a massive crater near the north end of the island, and running down to the west coast. The GR131 runs the whole ridge. Yesterday, we hiked a small part of it in the southern part of La Palma; today, we’ll get some of the middle.

Our taxi ride up the long and curvy mountain road took about 45 minutes, gaining us 1875 m (6160 ft) in altitude, most of the way up to the ridge. On the ride up, we passed through a layer of clouds. We then had another hour of hiking to gain 300 m (1000 ft) to climb up to the ridge, near Pico de la Nieve. On our way up, we got a great view of Teide’s summit above the clouds. 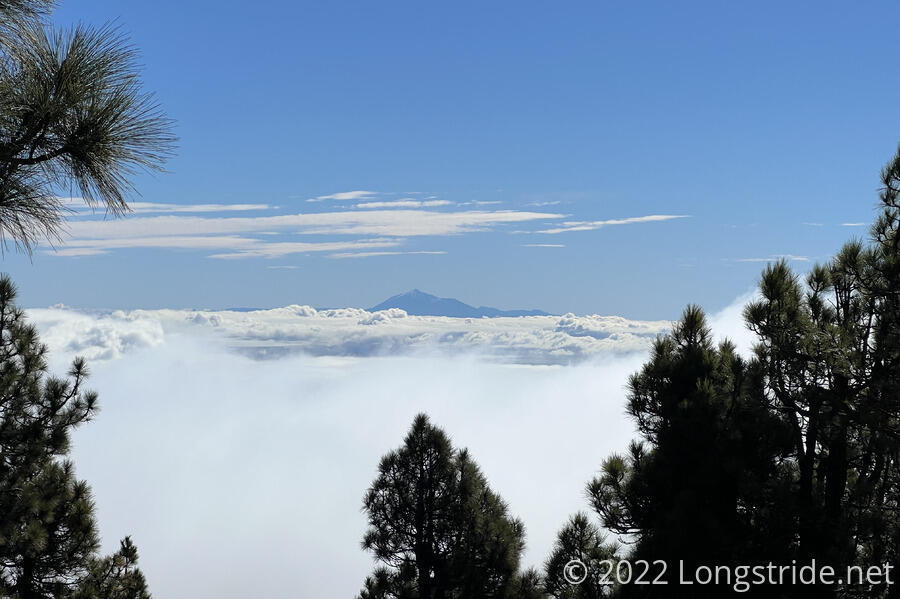 Teide — El Teide on Tenerife from just below the Caldera de Taburiente ridge.

Once we reached the ridge, we had spectacular views across and into the caldera. And, without the side of the mountain to deflect the wind, it was now very windy. On the far side, we could see one of the telescopes that make up the Roque de los Muchachos Observatory. While we took in the views, clouds from the ocean began spilling into the caldera from the south.

This was the high point of the day; most of the rest of the day would be downhill. (Fortunately, not all the way down to the coast, but still several thousand feet of elevation loss.) Now, we turned south, heading back in the direction of Fuencaliente. After about another twenty minutes, we took a side trail to a view with ancient petroglyphs, and stopped there for a lunch break. Unfortunately, in 1998, visitors vandalized some of the rocks with the petroglyphs, and so now they’re all behind thick iron bars to deter further damage. (And sadly, the vandalism is far more visible than the petroglyphs themselves.)

We continued on after half an hour. The clouds had continued to blow in, and now they were beginning to rise up to our level. This meant we were walking through fog. Though, there wasn’t much humidity, at least at first, but the clouds did cut down on our views. One of the last good views we got was of the trail along the caldera rim. 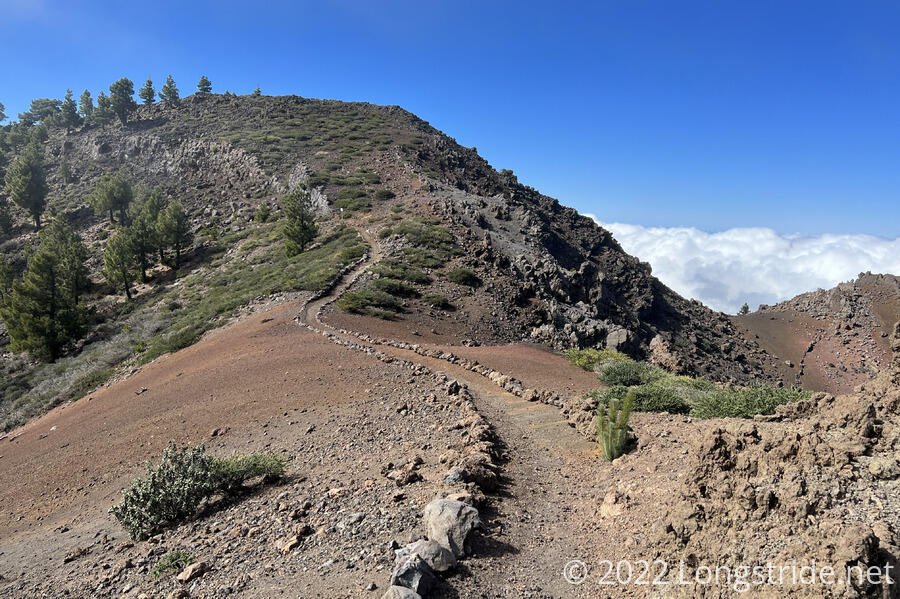 As we slowly descended the ridge, we descended further and further into the cloud, to the point where it wasn’t just mist swirling around us; the humidity was rising, and with it the size of the water droplets in the air. A light drizzle started, and then light rain. The winds, which hadn’t weakened any, were blowing the rain sideways — sideways and up, even. It reminded me a bit of Franconia Ridge on the Appalachian Trail, where visibility was maybe 30 feet, and it was so foggy, you could actually see the wind gusts before the wind hit you. It wasn’t quite so foggy or windy here, but it was getting colder, and less pleasant. Which is why, after only another hour of hiking, we stopped for a break at the quite wonderful Refugio Punta de Los Roques, once we arrived.

The Refugio was a four-walled stone building with a door and a couple of windows. Inside were a pair of picnic tables, and inside another set of doors was a large bunkroom, which could easily hold 20 people. There were also solar panels on the roof, which charged a battery that provided lighting to both parts of the shelter. We hadn’t expected it to be so nice, and it was almost a shame that we hadn’t planned on staying here. (And even if we’d been able to hike the whole GR131 on La Palma, we probably wouldn’t have stayed here either.)

We had a second lunch break, and with the lousy weather outside, we weren’t terribly inclined to get back to hiking. Eventually, though, we had to leave; we did have a bus to catch later.

While we were waiting in the shelter, the rain let up a little and it warmed up slightly. That didn’t last, though, and despite my constant hoping that we would hike out of the cloud soon (“it’ll be sunshine and rainbows”, I said), the cloud — and the rain — remained. I wound up with my shirt completely soaked; by the time I admitted to myself that the rain wasn’t going to stop anytime soon and I should probably put on my rain jacket, it was too late for the rain jacket to do any good.

An hour and a half hiking a steep downhill in the rain, we reached El Reventón, the site of another shelter (which we didn’t actually see because we weren’t looking for it), and the end of the GR131, as far as we could hike it in this direction. We took a side trail, the PR LP 1, which on top of the 2500 ft of elevation we’d lost hiking south along the ridge, dropped us another 2000 feet off the ridge, into a valley to the west.

Dropping off the ridge is what finally got us below the clouds, and the rain stopped. We departed the trail and began following a road once we reached the Ermita de la Virgen del Pino. From there, we followed the road for a mile before reaching a bus stop across from a visitor center for the park that contains the Caldera de Taburiente. On the road, we finally got our rainbow, in spectacular form. Later on, we even got a double rainbow!

Our timing today reaching the bus stop was well done; we only had to wait about ten minutes before a bus showed up to take us back to Santa Cruz. Though, in retrospect, it may have been a better idea to take the LR LP 1 down the east side of the ridge towards Santa Cruz, and either get a bus somewhere in that direction (though where, we were unclear) or even just walk all the way back to Santa Cruz. We might have considered that an option if we hadn’t been trying to get back to town at a reasonable time to check in to the apartment we rented. (With the side-trails on approach and descent from the ridge, we hiked about two-thirds as much off the GR131 as we did on!)

Tomorrow: we go back to Pico de la Nieve, and hike the rest of the way around the caldera to the Puerto de Tazacorte, finishing the GR131 on La Palma.