After just under a month of hiking and traveling, on our eighth island, we finished hiking the GR131. 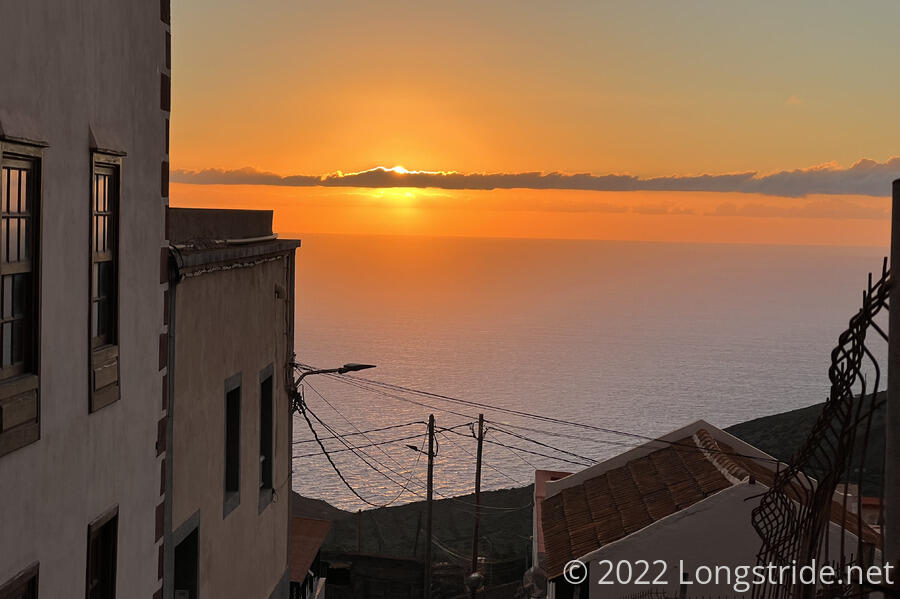 Our last day on the trail started off with a beautiful sunrise, as the sun ducked behind a band of clouds over the ocean.

Yesterday, we’d arranged for an 8 am taxi pickup to take us back to Fuente de La Llanía, where we stopped yesterday. Our taxi this morning was as punctual as the one yesterday afternoon, and about 20 minutes later, we arrived back where we left off yesterday. It was again a little weird fast-forwarding our hike yesterday, as the taxi raced us uphill — and into the clouds that had already gathered over (and on) the higher elevation parts of El Hierro.

While it was nice in Valverde, our taxi ride brought us back up another 2500 feet, into a cold, windy cloud, with rather limited visibility. So as we were hiking through the fog, with something like 50 feet of visibility, it rather felt like we were at the end of the world. 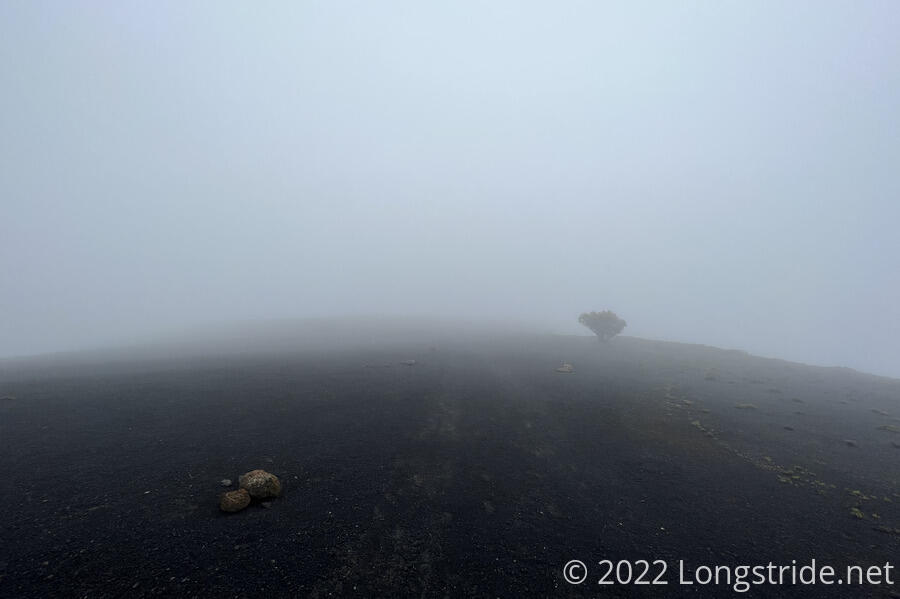 From the trailhead, we briefly followed a paved road, before veering back off onto a trail, which eventually became a dirt road. After about half an hour, the trail took us next to a cliff, and we were afforded a brief view of the El Golfo valley, the site of an immense landslide 15,000 years ago where the western half of El Hierro collapsed into the ocean, leaving behind the steep cliff we were walking along, and the valley below. A strong wind blew off the ocean to the west and up from the valley, contributing to the cloud above us as it gained altitude and cooled down.

This contributed enough moisture to the cloud we were walking through that the trees were dripping water, as if it was raining. No doubt, this is what the cloud forests on La Gomera would have been like in a wetter season, only with an entire forest dripping on us instead of the one or two random trees alongside the trail.

After a little more than an hour, we reached the summit of Malpaso, the highest point on El Hierro. The fog and wind continued, so we had no views.

With Malpaso, we completed the last (significant) uphill of the hike. From here, it would be downhill for almost the entire rest of the day. Because of the cold wind, we quickly hurried off the summit, every step forward (and downhill) taking us towards the edge of the cloud, and then finally, below it. From the summit, the trail generally followed the south side of the ridge, a bit below the top, far enough down that we weren’t going to see anything from the north side of the island. We stopped for a break on the side of the trail at a place far enough down from the top that the mountain shaded us from the wind. The clouds continued to blow over us, sinking down to the east once they passed the ridge.

We continued to follow below the ridge for another hour and a half, gradually descending, and occasionally getting views to the ocean to the south. We passed Fuente de Binto, a spring hidden underneath a tree and protected by a short stone wall. We also passed through a rather difficult to open gate. We also passed a herd of sheep which was mostly just sitting on the ground.

Finally, the trail brought us back to the ridge, very briefly, for a wonderful panoramic view of the island. The clouds still gathered over Malpaso, shrouding El Hierro’s summit, but had lifted enough for us to see both the north and south coasts of the island, with a peek into the El Golfo valley.

El Hierro — View east towards Malpaso, showing the El Golfo valley to the north, and the ocean to both the north and south.

From the view, the trail made a sharp turn to the southwest, dropping off the ridge and passing through farmland. We briefly met a paved road, which took us to the Ermita de los Reyes, where the statue of the virgin now resides. It is also the starting location of the every-four-year pilgrimage that follows the GR131’s route. (See yesterday’s post for more details about the pilgrimage trail.) Originally, the statue resided in some nearby caves until the chapel was built. We stopped for another break just below the caves, with the trail now having departed the pilgrimage trail and heading off on its own.

We began a slightly steeper drop down the mountain, leaving the farmland and making our way in earnest towards the ocean. A paved road switchbacked its way down the mountainside as well, but the trail cut the road’s switchbacks with tighter switchbacks of its own, until it joined the road for good. Briefly, a light drizzle fell, but it was so inconsequential we didn’t even notice when it finished. As we descended, the Orchilla Lighthouse came into view.

The road brought us to a bit of an improvised dirt parking lot across from a trail and off-road-vehicle-only track, with a sign pointing down the road to Faro de Orchilla, and towards the trail towards the Meridiano Cero monument. We followed the side trail, heading mostly west towards the monument, which stood at the end of the dirt road in front of a rather rugged and less eroded portion of lava flow.

Hundreds of years ago, Europeans thought that the Canary Islands were the western-most place in the world. Starting in 1634, France ruled that the meridian running through El Hierro, the Ferro Meridian, would be used as the reference meridian on maps, and so it was the prime meridian for many countries for many years, until the Greenwich Meridian became the internationally adopted prime meridian.

While not actually at the western-most point of the island (it’s off by about half a mile), and not actually the end of the GR131, the meridian monument felt like it should be the end of the trail. We walked a bit further, through a path worn through the lava, and stopped for a break once the path dissipated. We had a good view of the ocean, and also of the lighthouse.

Meridiano Cero Monument — “Punta de Orchilla — El Hierro, The westernmost Spanish land. This monument was erected in memory of the Meridian of El Hierro, the origin of longitude in the cartography of various European countries until the middle of the 19th century. Captain General of the Canary Islands, May 27, 1989” 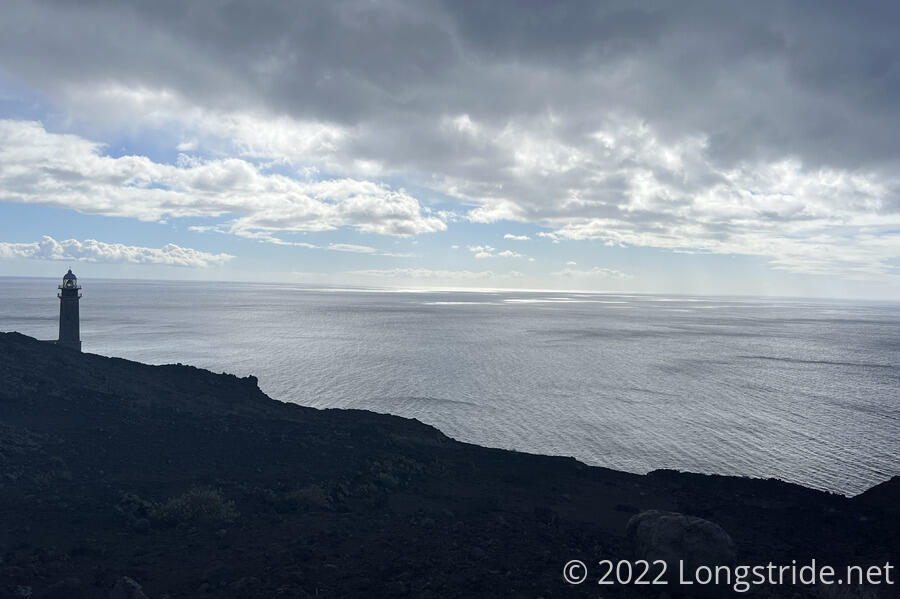 We returned to the paved road and continued following it, curving around the Montana de Orchilla, and took another short detour to look at the lighthouse up-close.

Just past the lighthouse, a sign marked the “Final del Sendero GR 131”, the end of the trail. Another sign for the GR 131 pointed towards the Embarcadero de Orchilla (Orchilla Pier), still another three quarters of a mile ahead. This last section of trail, along the road, took us past a couple of lava tubes and through a large expanse of lava rock. The end of the road, and our destination, was a small concrete pier adjacent to a parking lot and covered picnic area.

The pier jutted out in the middle of an expanse of lava rock that flowed into the ocean. Next to the pier, incoming waves caused water to pulse up and down in channels in the rock. Up and down the coast, waves crashed against the rocky shore, spraying water into the air. It was beautiful scenery to end a hike.

We watched the waves for half an hour, before our taxi pulled up, about fifteen minutes early. Our hike was now over, and sadly, it was time to begin the journey back home. We’ve had a great time exploring the Canary Islands, and we’ll definitely be back, someday.

It took an hour for the taxi to wind its way up the mountain and across the island back to Valverde, again largely paralleling our hike in reverse. Again, we got dropped off at a food store, so we could get supplies for dinner, a small jar of mojo (the sauce used to garnish Canarian potatoes) to take home, and a bottle of local El Hierro wine to celebrate. 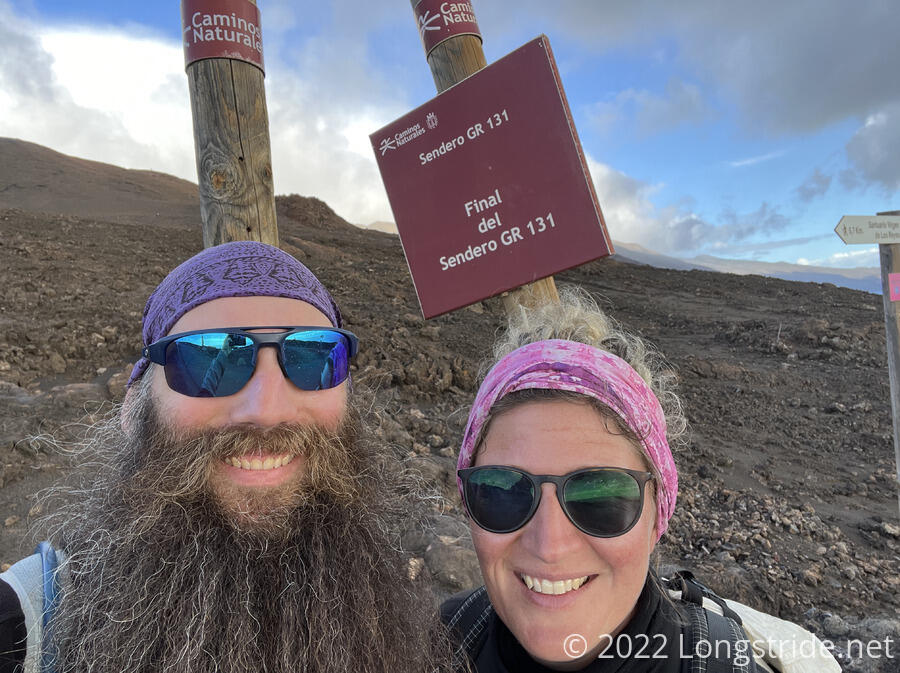 Tomorrow: We fly to Tenerife, back to Lanzarote, and from there, back to Germany.