The word of the day is windy. Almost as soon as I left the Mount Laguna Lodge, the wind started, and it rarely let up all day. There were also a number of incredible views, often of the desert just to the east. 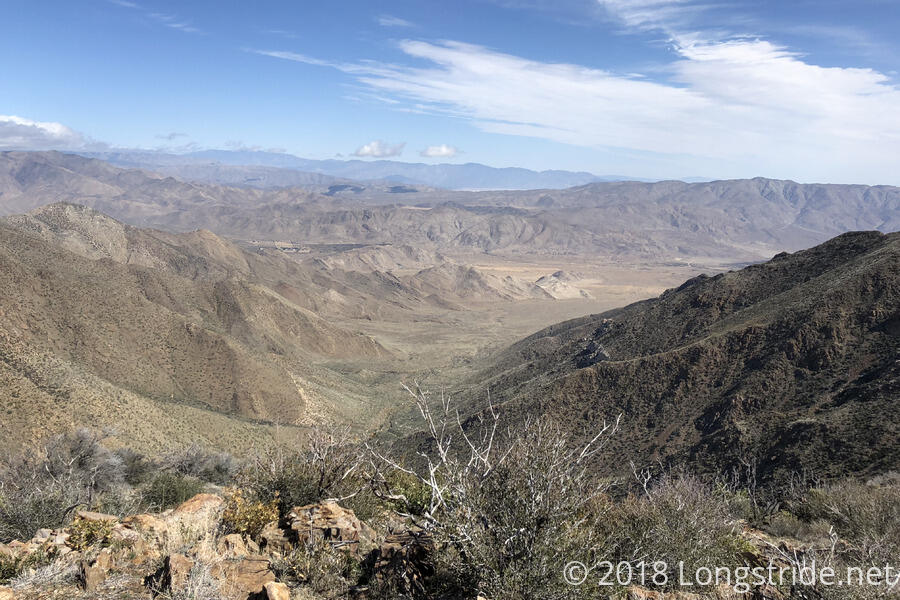 One of my goals today was to summit Garnet Peak, about .6 miles off the trail. However, when I got there, it looked steeper than the elevation profiles suggested, and the wind was enough of a nuisance that I decided it unnecessary to do so. Still, the sky then was some of the bluest I’ve ever seen, and photos can’t really do it justice.

A little later, I passed by the Pioneer Mail Picnic Area, which had a relatively new mileage sign for the trail. “Only” 2600 miles to go. 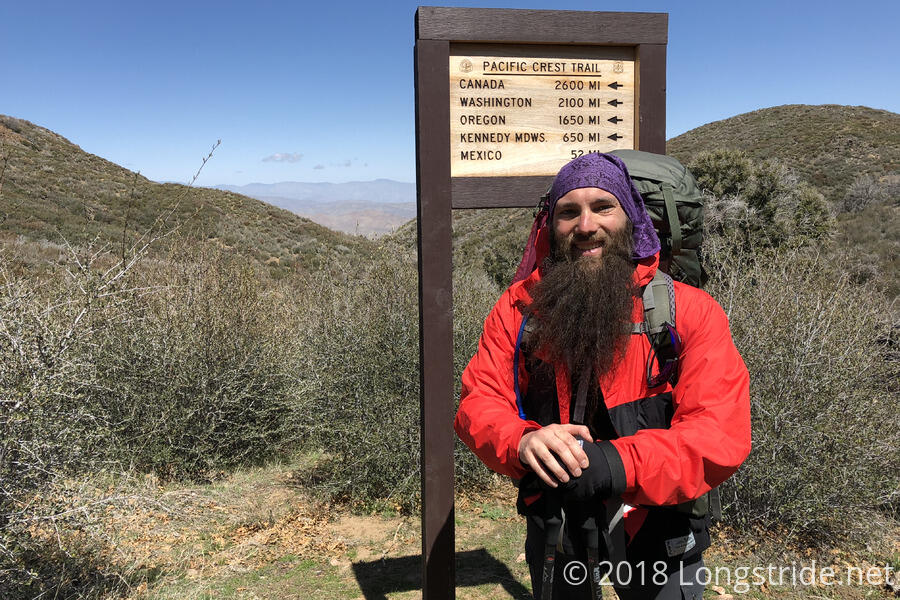 Still A Long Way To Go

This update is going to be somewhat sparse, as I’m currently hunkered down in my sleeping bag, having made a few (well, one, really) less than optimal decisions that caused me to end my day far earlier than I should have.

Just under 14 windy miles of hiking was wearing on me, and I reached the campsite at Oriflamme Canyon a bit after 3 pm. Given the location of the next viable campsite (either 4, or 5.5 miles ahead), either of which would have made today longer than 17 miles, I didn’t want to risk getting to camp too tired, or too late, with another night of freezing temperatures forecast.

That really shouldn’t have been that big a consideration, though. I’m still thinking distance in terms of the Appalachian Trail, and the PCT is much gentler, so it probably would not have killed me to push 17 or 18 miles in my first week. At the least, it would have had me hiking for an extra few hours, rather than hunkered down in my sleeping bag as my tent whips around me as much as it possibly can. (I am really starting to not like this tent in more than gentle winds; I would have been much more comfortable in the tent I had on the AT.)

Really, the point where I realized I made a mistake staying here was when I decided I was just going to have a dinner of snacks rather than real food, because it was too windy. If I hadn’t already had my tent up and everything inside it when I had that thought, I’d have probably pushed on. Once the tent was up, though, I really didn’t want to have to take it down again and repack it in high winds, just to put it back up in a few hours.

Oh, well. Live and learn. At least I have a great view from my tent?

Tomorrow: assuming I don’t turn into a meat popsicle overnight, it’s mostly downhill for awhile, and with plenty of tentsites, so I’m going to make up for the short days yesterday and today and go as far as I can.

Pacific Crest Trail, 2018
« (Day 4: No, I Would Not Like a Tent Popsicle) Previous Entry
Next Entry (Day 6: Like Walking Through a Painting) »