A short and lethargic day for Quoi and I, after not getting as much sleep as we’d have liked, we hiked over Benson Pass and got in position for Seavey Pass tomorrow.

Back the day before we went over Forester Pass, the zipper on my sleeping bag split open, though I was able to work around it with some effort. The zipper’s been gradually worsening since then, and last night, around midnight, I had a half-hour long fight with it to get it to close up again so I could stay warm. I regretted not taking the time to get it fixed in Mammoth Lakes, and I’ll just have to do something about it when I get to South Lake Tahoe.

The group whose fire we shared last night had their fire going again before I even got out of my tent. Hopefully, with the help of the sun, they’ll get their stuff dry in a reasonable amount of time.

Quoi’s pants didn’t sufficiently dry last night by the fire, so for part of the morning, she wore her t-shirt as pants so she could put her pants out in the sun. Inasmuch as someone can look fashionable while wearing a t-shirt as pants, Quoi pulled the look off pretty well. 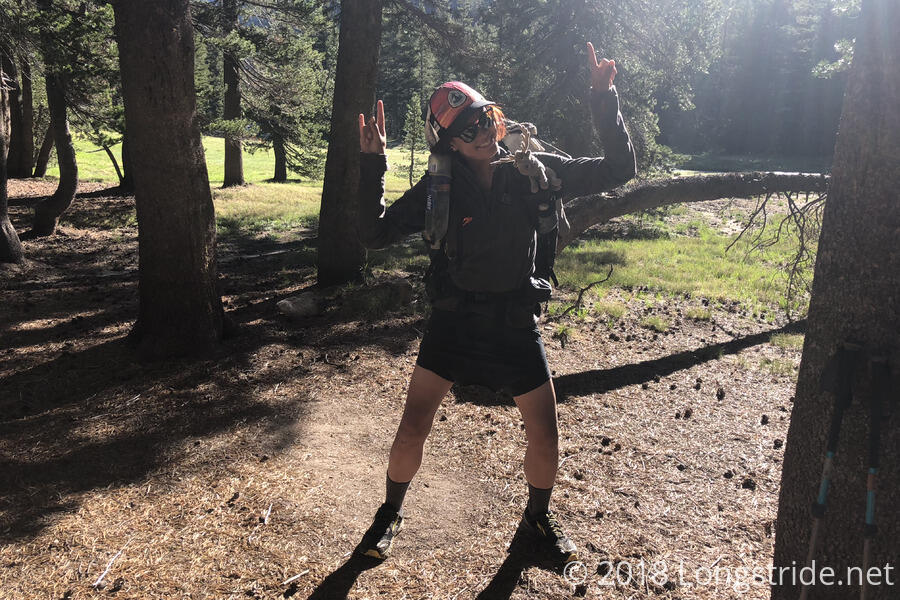 Quoi also had a sleep interruption last night: the deer that had been mingling around our tents while we were at the fire last night came back. Apparently, they woke her up as they were stomping around, and after they started to hang around her tent, she got out of her tent to shoo them off.

We finally got started on our hike a bit after 8, and after bouncing around along Matterhorn Creek for a short while, the trail turned and sent us uphill, towards Benson Pass. Along the way, the trail generally followed (and several times, crossed) Wilson Creek. Getting up to the pass, I was successful in keeping my feet dry on all three significant crossings: the first, I had to jump across; the second, I found a dry crossing a short distance upstream; the third, I crossed using a few logs that looked pretty unstable, but held up well enough to get me across. My feet got wetter going through muddy and swampy areas of the trail than they did from the water crossings.

I made it up to Benson Pass around 10:30, and was mostly surprised by what I didn’t see: lots of mountains in the distance. While not the tallest of the passes we’ve gone over, it was still over 10,000 feet, and if it was like the other passes we crossed, I would have expected to still see some mountains off in the distance. However, past the nearby mountains, there wasn’t anything tall off in the distance: a clear sign we’re heading out of the High Sierra. 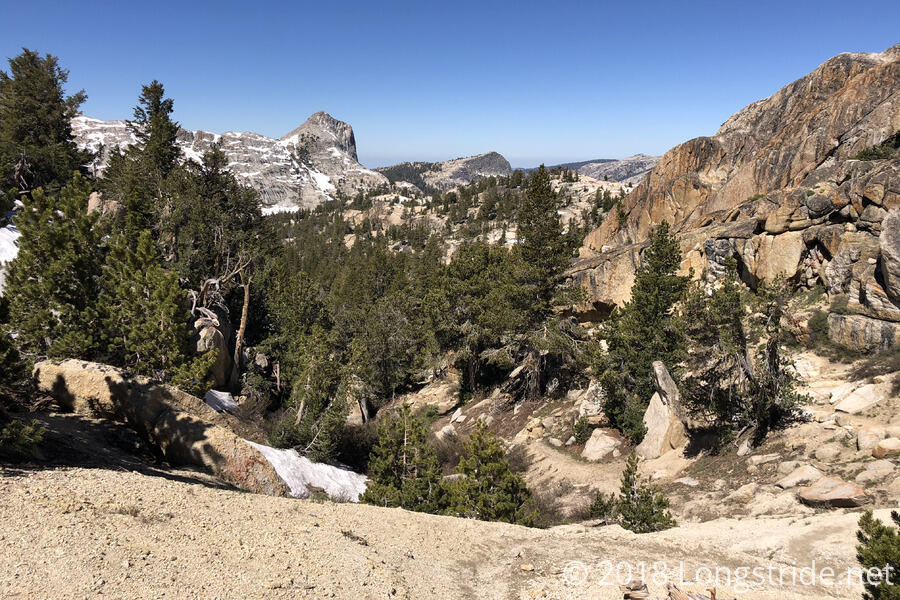 About an hour later, I arrived at Smedberg Lake, where I stopped for a break, and decided to cook dinner while I was waiting for Quoi to catch up. 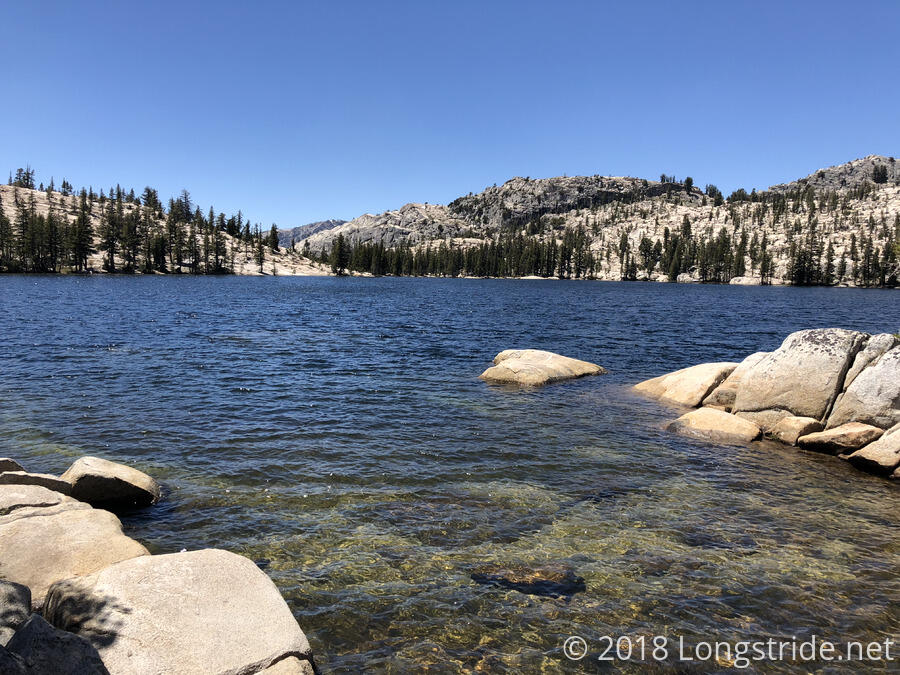 After we got going again, I felt slow and tired. Following the lake was a short climb up, and then a very steep hike down, with just about everything that slows me down all at once: the trail was a wet, muddy, sometimes snowy, rocky, steep downhill, occasionally with quite uneven “stairs”. We stopped for another break only four miles after, before we’d even made it to the bottom of the hill.

On the way down, though, we got glimpses of waterfalls on the mountain on the other side of the canyon from us. One of them was quite long, and had a short distance where it flowed across the mountain before resuming falling to the valley floor. 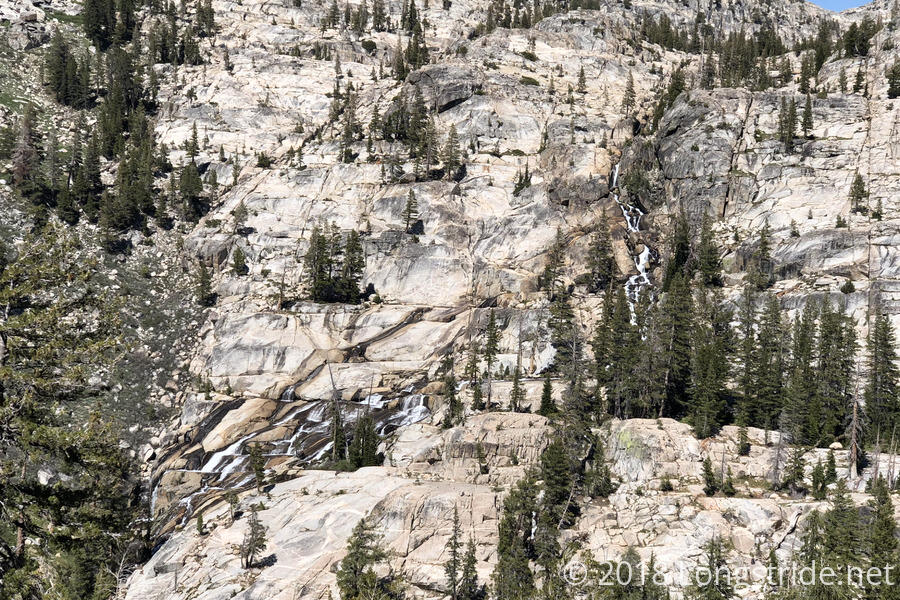 Rocky Cascades — A waterfall from Smedberg Lake’s outlet trickles down the mountain.

That afternoon, there were four more water crossings. I avoided most of the water on the first crossing, but on the second, I had to get my feet wet. There was a log that crossed the creek, but after I got a third of the way across, I didn’t feel safe continuing forward. The log had several knots on its surface, and I felt that my feet were too large to place them where they needed to go and still have sufficient traction to not fall off. I then had to inch my way backwards, which was a bit tricky, between the knots on the log, not being able to see where I was going, and the tree branch that was in the way. I wound up losing my balance and falling backwards. Fortunately, I had gotten far enough back that the leg that slipped off landed solidly on the stream bank (narrowly missing a small tree stump that was sticking out of the ground). I think I narrowly missed landing on Quoi. (She, of course, had no problem with crossing on the log.)

The two later crossings involved jumping across the creek and landing on a pretty slanted rock; and walking along a very long fallen tree (easily 50 feet long) while attempting to ignore the biting mosquitoes. 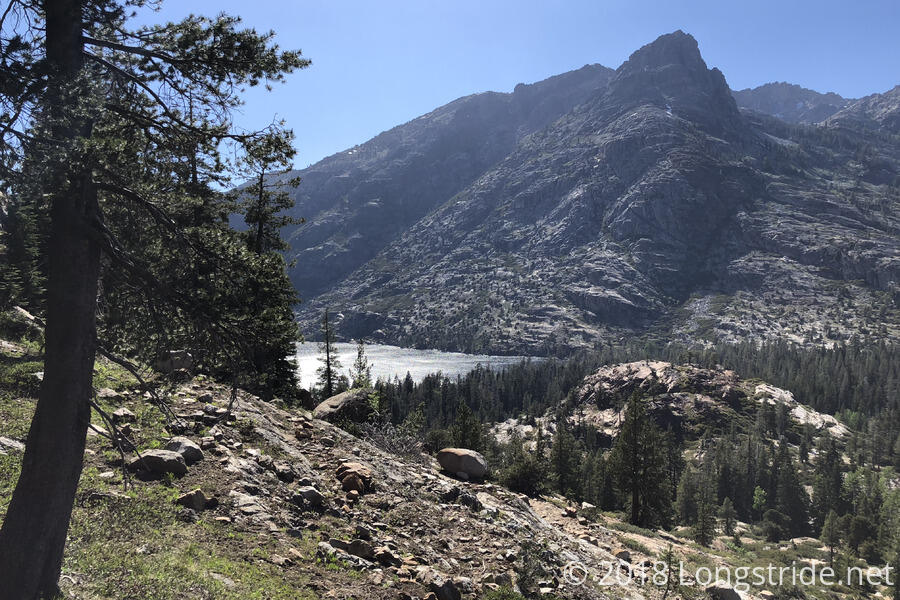 Both of us tired from sleep interruptions last night, we camped at the very next campsite after that last creek crossing, setting our tents up as quickly as possible to get out of the mosquitoes.

We went a mildly disappointing 10.7 miles today, but we should be relatively well set-up to make it over Seavey Pass tomorrow. Hopefully, we’ll get some better sleep tonight, and be able to leave camp at 6 tomorrow, and go at least 14 miles to Wilma Lake. It’ll be another day with a lot of uphill hiking, but hopefully we’ll be rested enough that it won’t be too bad.