It was a cold and windy morning, and for the first time in awhile, I wore my rain jacket on top of my fleece to keep warm.

For the video I recorded yesterday, I somewhat abused my bear can, kicking it around a few times for dramatic effect. It didn't seem to mind (or get scratched up in the process of rolling on the ground), and this morning, I was quite surprised to find that my pop tarts were fully intact despite the abuse. It just goes to show that proper food packing techniques really pay off.

The last thing anyone wants when digging a cathole is to pick a previously-used location. There is a hiker on the PCT this year, “Landmine”, who got his name after digging up someone’s cathole on his first day on the trail. Fortunately, I haven’t done that yet (it helps to be ahead of the herd), but I did dig up today someone’s used tampon and applicator. Ew. And doubly-so, since those always need to be packed out, since they don’t biodegrade.

Our business in the woods concluded, we headed off towards Sonora Pass. Once we cleared the tree line, a set of giant switchbacks were easily visible on the mountain in the distance, outlined by snow not yet melted. Clouds graced the sky, one of the cloudiest days we’ve had in quite a while. There was also a great view back to the canyon we had walked along. 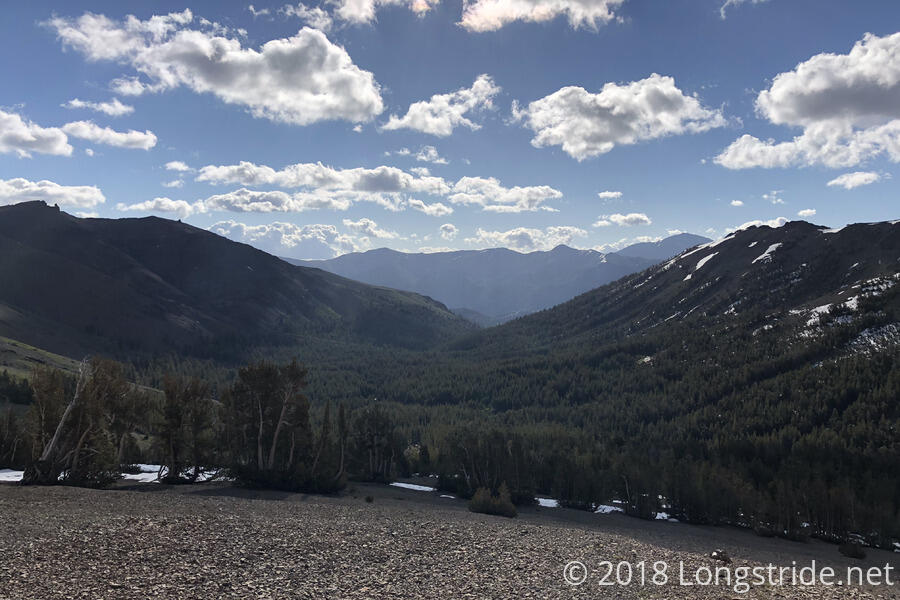 Once we got to the point where the first switchback began, an alternate option presented itself: a herd trail that went off into the distance, cutting the switchbacks entirely. Not wanting to deal with the snow, we took that path, saving a fair bit of zig-zagging, but also giving ourselves a much steeper climb. We still had some snow, but it was less than we’d otherwise have had to walk through.

The switchbacks we are in the process of cutting are easily visible in the snow.

We reconnected with the trail at the top of that particular ridge, and from there, the trail took us around and behind the next mountain over, generally gaining altitude but mostly bouncing around a bit. After a little less than five miles, we took a break in a little depression just off-trail, surrounded by trees that slightly sheltered us from the wind.

A mile and a half later, we stopped on an exposed (and still very windy) ridge because we got cell service. We figured this would likely be our only chance for several days for internet access, since there is neither cell service nor public WiFi at Kennedy Meadows North. We stood (well, I stood; Quoi sat down on the rocks) there for far too long with pretty poor signal, before continuing on. As we had been making progress today, the mountains and landscape had started to change character, so seeing something a bit different was a nice treat.

There was quite a bit of snow on the trail, and we had some lengthy snow fields we needed to traverse. For the most part, though, the path we needed to take was fairly clear. In a few places, there were multiple choices, and we tended to prefer direct paths over strictly following the trail. 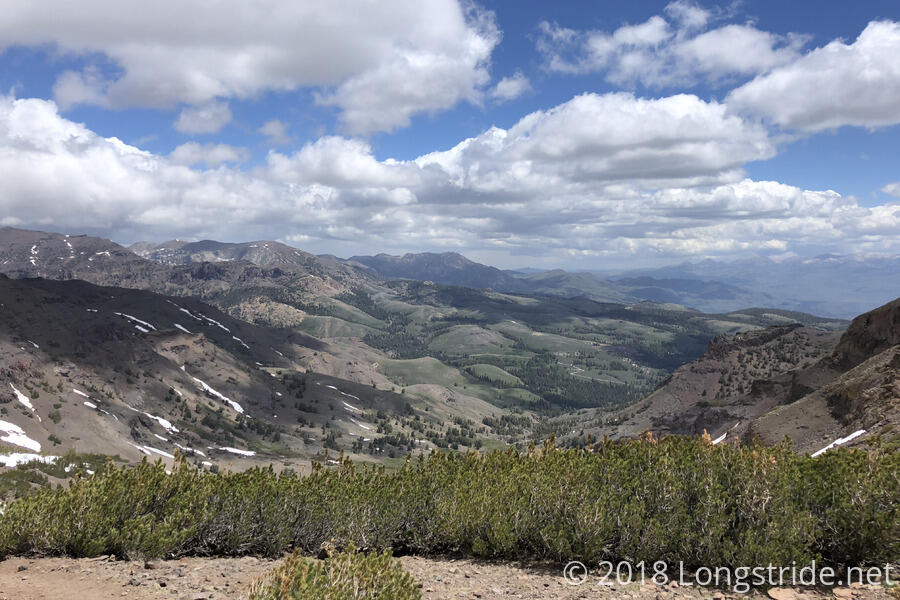 After trudging through a fair amount of snow, and then climbing past that snow field, we made it to the high point of the day, the border of the Emigrant Wilderness of Stanislaus National Forest. From there, it would be downhill to Sonora Pass and Highway 108. The clouds in the distance darkened, and one cloud in particular, that looked like it was going where we were heading, looked to be releasing snow. A few flakes fell on us, as if to say, “best get a move on”. 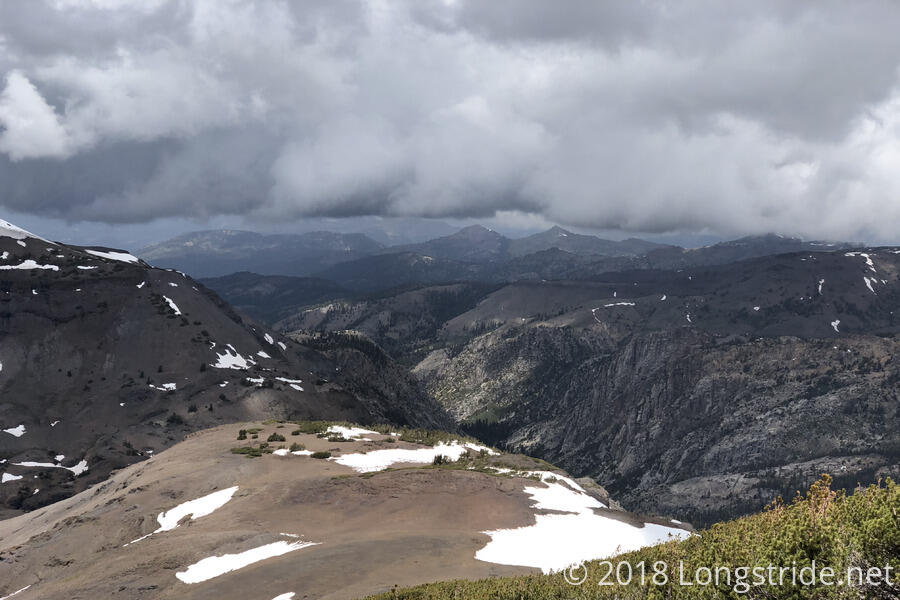 For weeks, Quoi has been talking about a very long glissade down towards Sonora Pass, into a bowl. She hoped there’d be enough snow to do so, as it would cut out a mile of hiking. I was hoping there’d be very little snow, so we wouldn’t have to. The trail split the difference: not enough snow to glissade down, but more than enough to be a giant nuisance. Now after noon, the snow wasn’t as firm as it had been, and we were just starting to slide around with each step we took on the snow.

Reaching a point where it looked awfully sketchy to keep following the trail, we instead descended the mountain on a rock island and, once we reached more snow, kept walking down, effectively cutting out a portion of the trail, which took a longer, more gradual course around the edge of the bowl, meeting up with us near the bottom.

Once we got to Highway 108 (which crosses Sonora Pass), Quoi and I very quickly got a hitch; I think we waited less than five minutes. Giving us a ride to the Kennedy Meadows North Resort and Pack Station was Ben, who was driving his parents’ van that had been turned into a small RV.

The drive to Kennedy Meadows North was down a steep, windy mountain road for about eight miles, followed by another mile down the one-lane road to the resort. Along the way, we passed a large number of RVs, almost piled on top of each other.

Kennedy Meadows North is a resort ranch that also caters to PCT hikers. For a very reasonable $35/night, they offer hostel-like accommodations for hikers: a (non-bunk!) bed in rooms of four, shower, and laundry. The restaurant and general store were a little pricy, but not unreasonable given the somewhat remote location. The PCT dorms, upstairs and out of the way in the main building, were relatively quiet, but the upstairs corridors were about four feet wide; navigating around with a pack on was a bit tricky, since turning around was basically impossible.

One also couldn’t miss the numerous dogs that seemed to have the run of the main building; as a ranch, though, they seemed to fit in.

Quite hungry, after getting checked in and reserving a table for dinner (since it’s Father’s Day), our next order of business was lunch. Towards the end of our meal, we were joined by Outlaw, a hiker from last year who was returning to the trail to finish a section he had skipped.

I got a shower (which was quite awesome), and Quoi, Outlaw, and I threw our clothes into the laundry. While I was picking up my resupply box from the general store, Tenderfoot (who had arrived a few hours after we did) attempted to join our dinner reservation, but decided against because she was really hungry and wanted to eat sooner. (Our reservation was for 7.)

The staff wound up combining two three-hiker tables into one, and Quoi and I ate dinner with Outlaw, Caveman, Bronco, Jason, and Kenny. Most of us had the dinner special, a rib eye steak that included a trip to the soup and salad bar, and dessert (bread pudding). It was all very delicious; I only regretted not asking for the extra-thick cut of meat (which Caveman ordered, but was unable to finish).

After dinner, we picked up the laundry from the laundry room. It appears that, for the first time on the trail, I’ve lost a sock in the laundry. (Fortunately, I have plenty of extras.)

Tomorrow: I will finally be able to get rid of my bear can. Horray!

This post contains links to amazon.com. As an Amazon Associate, I earn from qualifying purchases.
Pacific Crest Trail, 2018
« (Day 88: Dorothy Lake Pass and Goodbye to Yosemite) Previous Entry
Next Entry (Day 90: Too Much Meat? I Don’t Think That’s Possible.) »