Quoi and I didn’t actually set a departure time for today, until around 2 am when she accidentally woke me up when she was going to the bathroom. I found it rather amusing that she managed to wake me up doing something quiet and mundane, but didn’t when she was intentionally making noise to scare off deer.

We decided on leaving at 7, but Quoi said she wasn’t setting her alarm, and to wake her up when I got up. I decided that since she still wasn’t feeling great, I’d also not set my alarm, and wake up whenever the sun woke me up. Which happened to be around 6:20 am.

I’d already been annoyed with my sleeping bag because the zipper has been failing to consistently engage the teeth, causing the zipper to split open. While I was trying to adjust it trying to get back to sleep, the zipper head pulled off one of the tracks, rendering it completely useless. So now, I have no choice, I’ll have to find someone in South Lake Tahoe who can fix it. Meanwhile, I can use the second zipper (meant to allow unzipping the bottom of the bag to provide ventilation for my feet) to, in reverse, zip the bag all the way up, and use the clip at the top of the bag to help keep the unsecured top of the zipper from splitting open as quickly. It’s a mess, but it will work until I get to town.

We started hiking around 7:30, making our way up a moderately steep climb. In a departure from our usual practice, we decided to not do checkpoints today, and instead, planned to meet at a campsite 18 miles from our campsite from last night. Then, once we both get there, decide whether to go further.

The trail for most of the day switched back and forth between exposed to the sun and shaded by forest. Happily, it also was not too steep, and the water crossings were all easy to navigate.

Over the course of the day, I started to see more hikers who had flipped north and are hiking southbound to the Sierra. They’ll certainly have a better time in the mountains than we did, since so much snow has melted since we were there (and will continue to melt).

I took my first break next to a mountain looked like a giant pile of rocks, cemented in place.

A curious mound of rocks that appeared cemented to themselves.

As the day progressed, the scenery continued to mellow from the jagged rocky peaks that dominated the High Sierra. There were many meadows, and the background mountains are more rounded and green.

One unusual bit of scenery was very nearby: a spring bubbled up directly on the trail, though it looked like it was probably being fed by a short underground tunnel from a nearby creek. 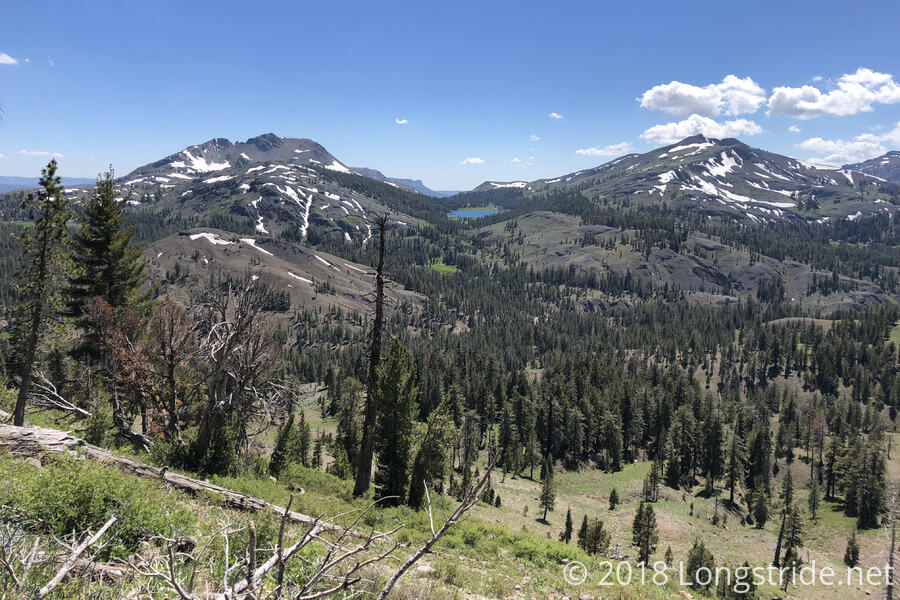 As has been typical, after the trail crested a saddle on a high ridge late in the day, the back side of the mountain had snow, and there were a series of small snow fields until the campsite I was aiming for.

Around 4:15, I made it to Noble Lake, where we had set our checkpoint. After looking around a bit, I decided that I didn’t really want to camp there. Although it was (mostly) clear where the three tentsites were, they were small, bumpy, and/or overgrown with grass, making them not very desirable. I was quite happy I didn’t get my feet wet at all from streams throughout the day, though they got a bit damp from a marsh right before Noble Lake.

While the lake didn’t offer much in the way of good campsites, it did have a great view: mountains to my left, the lake in front, and a valley to my right. It was sunny, mostly, though clouds drifted in and out, blocking the sun every now and then. I cooked my dinner, only occasionally troubled by mosquitoes.

Quoi made it to the campsite around 6:30, still not feeling great, and having a hard time eating. By then, I had already finished my dinner and was contemplating what to do if she was very late getting to camp. I had decided to start pitching my tent at 7, on the theory that if she got there that late, she likely wouldn’t want to go further. Fortunately, her arrival rendered that plan moot, and after she took a short break, we pushed on, since it really was a pretty terrible campsite.

We left a little after 7, hiking in the last hour before sunset, and stopped about 45 minutes later at a campsite. We were aiming for further, but it was large enough to fit both our tents, and Quoi (well, really, both of us) was tired. Still, though, we managed an even 20 miles.