At least five trains rumbled through while we were sleeping, but fortunately, it didn’t interrupt our sleep too much. I did roll out of my sleeping bag a little later than I wanted, though, and we got started hiking from Belden at 4:20.

Crossing the river involved going across a one-lane bridge that provided access to Belden Town Resort; that wasn’t too bad, since there was no traffic that early in the morning. However, across the river, the trail followed Highway 70 a short distance to a rest area, and the road was narrowed to one lane due to construction. We had to squeeze off the side of the road a couple of times to allow trucks to drive through without flattening us.

The climb up out of Belden Ravine was pretty steep and exposed, and it would have been a miserable climb up in the heat. Exacerbating that was that part of the climb went through a burn area, so there wasn’t even partial tree cover for a good distance. This, of course, wasn’t much of a problem since we started an hour before sunrise, and we made it all the way to our first break, 5.9 miles, before any direct sunlight hit us.

At that break, at a campsite at the former location of a cabin, I found a squashed tick on my boot’s tongue. I have no idea how long it had been there, but a quick check showed no other signs of ticks on me, so I’m assuming it was just very unlucky. 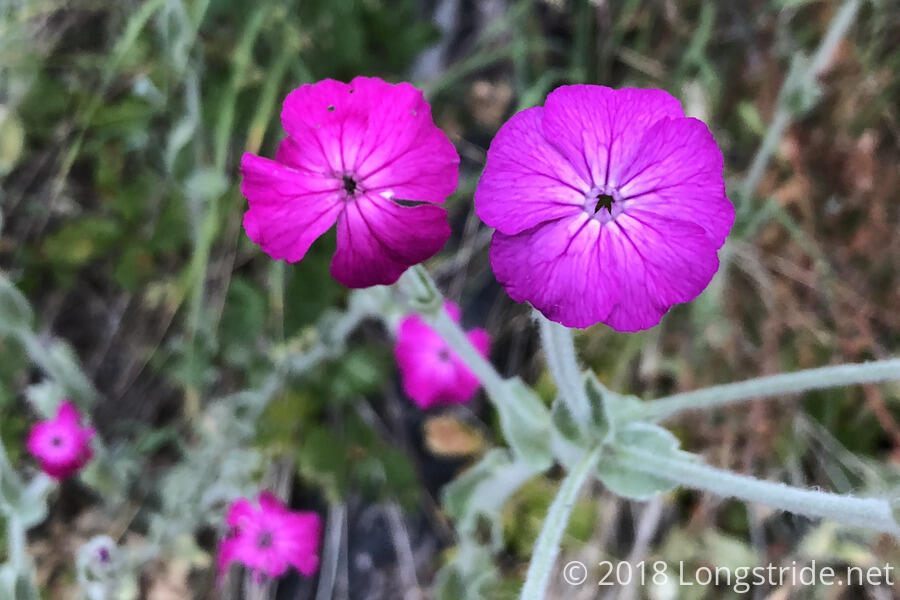 On the way out of Belden, we also left Plumas National Forest, and entered Lassen National Forest, marking our transition from the Sierra Nevada to the Cascades, which we’ll follow the rest of the way to Canada. Part of the Ring of Fire, the Cascade Range contains a number of volcanoes the trail will be going near, the first of which is Mount Lassen.

There are two distance “challenges” hikers often employ, usually in an effort to beat the afternoon heat: “12 before 12” (12 miles before 12 noon) and “10 before 10” (10 miles before 10 am). Accomplishing either generally means starting early enough in the day to get the miles in, though 10 before 10 is the “harder” of the two, since there’s two less hours in which to do roughly one hour less hiking.

I’ve accomplished 12 before 12 a few times, but today was the first time (I think) that I’ve actually managed 10 before 10: by 10 am today, I’d hiked 10.5 miles. This was pretty much entirely due to the early start, though having generally favorable terrain (even if it was all uphill) helped as well. 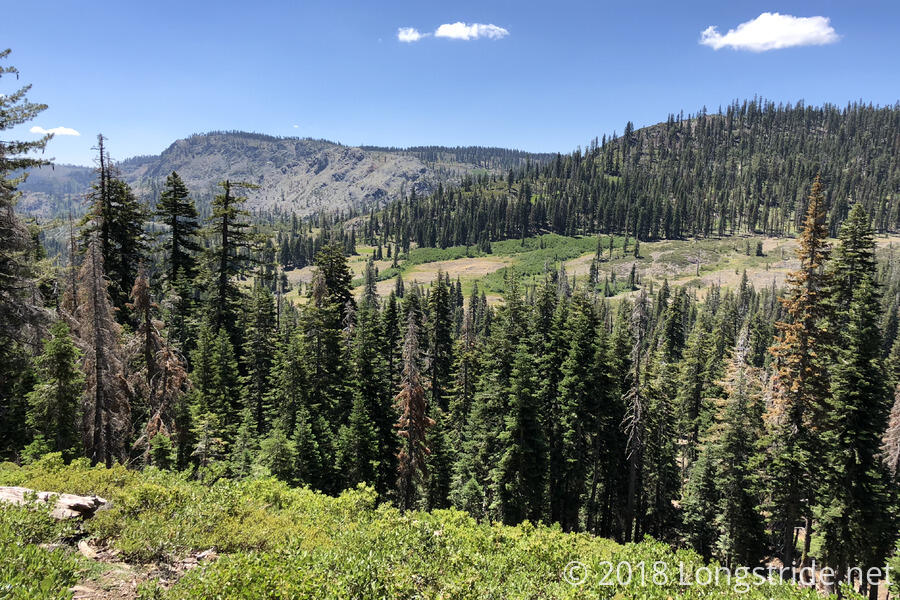 Much of the afternoon was fairly exposed ridge, until the trail again dropped below the tree line, cutting off the constant views. 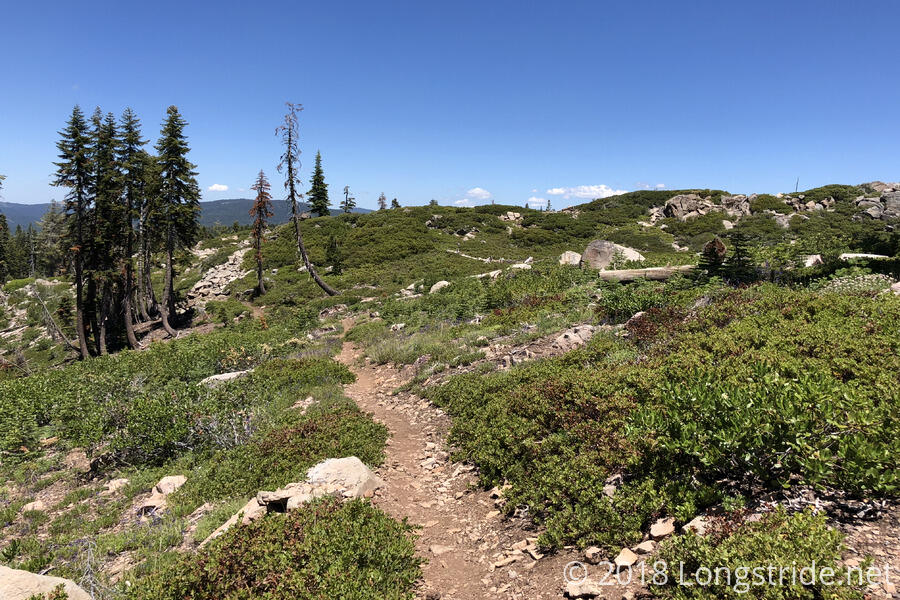 I got to Cold Spring, our planned destination today, around 2:30. Immediately upon arriving, Giving Tree and Non-Stick offered me half of a cantaloupe. They’d gotten it earlier in the day from someone on the road adjacent to the spring, couldn’t eat it all, and didn’t want to carry half a cantaloupe, since they’re pretty heavy. Of course, I happily took it, and then hid it to surprise Quoi with when she got to the spring.

The spring, piped into a large water trough, was flowing very well, and was named appropriately: its water was quite cold. It was also cold at the campsite adjacent to the spring. There was a nice breeze all afternoon, and that, combined with the shade, actually made it somewhat cold, and I had to put on my pants legs and fleece to stay warm while I was having dinner.

Quoi arrived at the spring around 5, quite tired, and was ecstatic when I showed her the cantaloupe. Together, we at the whole thing, and then buried the rind in a large cathole. (This was probably not strictly in keeping with Leave No Trace, but the rind was large, wet, and heavy, and we didn’t have a good way to pack it out.)

Even though Quoi was tired (well, we both were, since we’d been hiking over 12 hours at that point), we made the decision to push an extra 1.8 miles, to a campsite near the top of the next hill, 700 ft up.

We got that uphill out of the way this evening, reaching camp around 7, giving us a 20.7 mile day, and making it easier to go in to Chester tomorrow night — 24 miles ahead — instead of camping a few miles short of town and going in on Saturday morning.