It was warm overnight, and I was easily able to get hiking before 7 am. It was also overcast, and would remain so all day, so it was cooler than it might otherwise have been, but more importantly, there was very little direct sunlight.

Just past our campsite, there was a clearing. Along the edge of the clearing, there were a few stunted pine trees that all looked like they were upside-down, with leaves right at ground level, and a thin spindly trunk extending upwards only a foot or two.

Though we had 24 miles planned for today, most of it was downhill, so when I got to the side trail to the Butte County High Point, less than a quarter of a mile off the trail, I decided to go for it. The high point was marked by a sign (and log book) in the middle of the woods, and there was no view of any consequence there. The side trip only cost me about fifteen minutes, which I thought was more than acceptable to bag a “peak”.

The main uphill of the day was the six mile climb up the side of Butt Mountain, which happened toward the middle of the day. Early on, Butt Mountain came into view, with Mount Lassen in the distance.

I caught up with Quoi at a trail junction about a third of the way up Butt Mountain. I had planned to go further for a break, but Quoi pointed out that there were switchbacks on the trail ahead, and that likely meant there’d be little in the way of flat areas to sit down at. While we were sitting there, a butterfly flitting about landed on my shoe.

The trail continued through forest for most of the rest of the day. Also, on the climb up Butt Mountain, a very, very light drizzle started. It was almost so little rain you might dismiss it as just something falling from the trees, and I might have as well, had one drop not landed right on my eye. 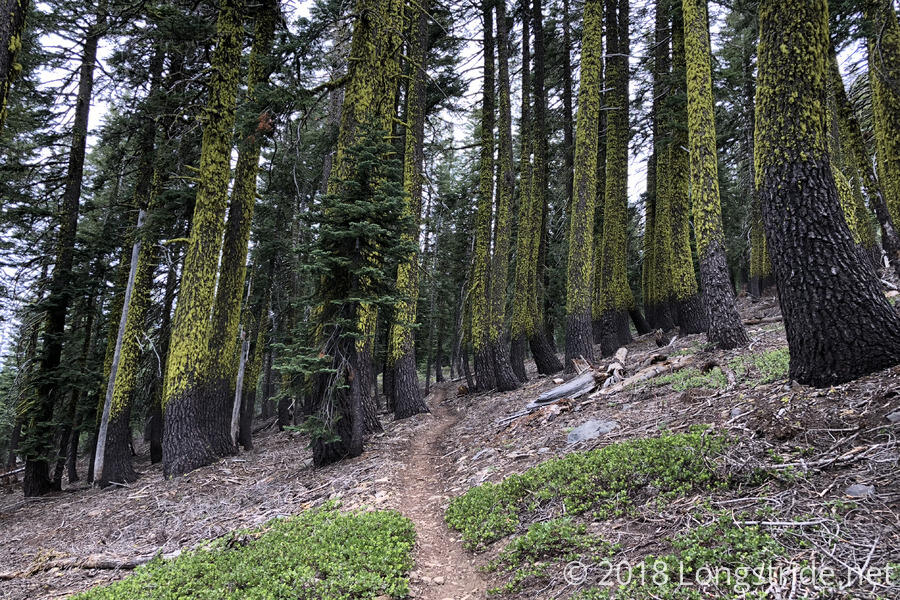 Sloped Moss — The slope of the ground is mimicked by the moss on the trees. 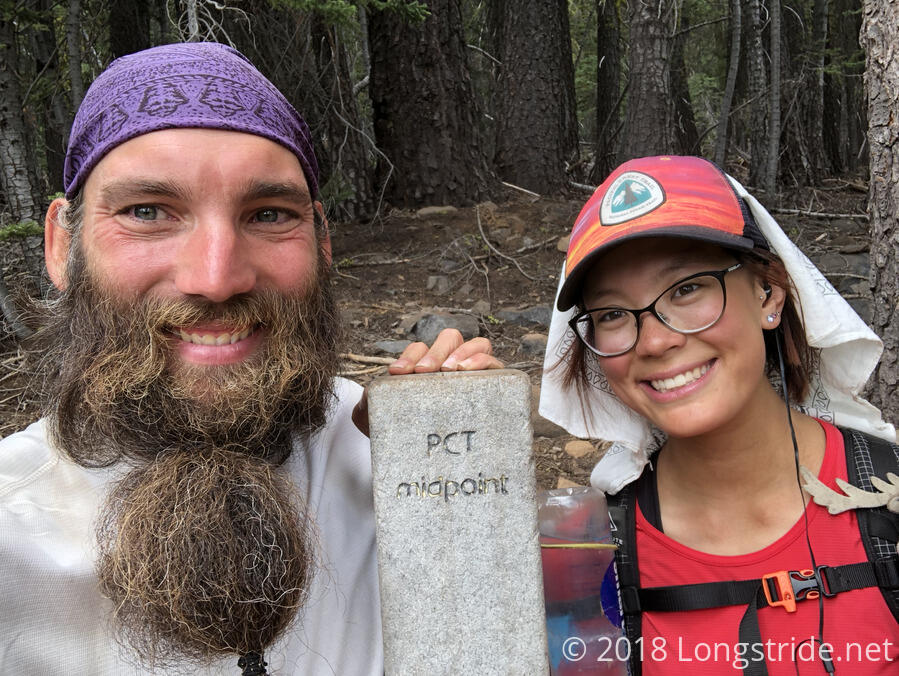 Longstride & Quoi at the PCT Midpoint

Wanting to get into town before it got to be “too late”, I set off down the hill towards Chester, leaving Quoi to finish her break and catch up later. On the way down, there was more of a very light drizzle, but still nothing worth getting my pack cover out over.

Towards the bottom of the hill, as I passed a creek, I ran into another hiker getting water; it was Truckee, a section hiker whom I last saw just outside of Warner Springs on the 8th day of my hike. A schoolteacher, then, he was on spring break; now, summer break, as he completes a larger section of the trail heading south.

Quoi had been talking up the milkshakes available in town over the last few days, so, like I did when we were going into Tuolumne Meadows, I asked him to relay a message to Quoi when she passed: “If you don’t hurry up, I’ll drink all the milkshakes”.

During the final bit of downhill before town, the trail passed through property owned by two different paper companies, and a ranch. This section of the trail seemed a bit less well maintained than the earlier trail, in that there was more debris on the footpath, but otherwise it wasn’t any significantly harder to hike.

Notably, volcanic rocks started to appear alongside the trail, another sign that the trail has moved on from the Sierra Nevada and into the volcanic Cascade Range.

We got to the trailhead on CA 36 around 5:30, and walked down the road a short distance to a place that had a larger area to pull over on the side of the road, and tried to flag own a ride into Chester. One car that passed us, I saw the driver was in a suit, and I said, “well, that guy will never stop”. Which, of course, meant that he did, and we had a ride with less than five minutes of waiting. The driver, Kevin, was returning home from a job interview (hence the suit), but it just goes to show that you can’t always judge people by what they’re wearing.

Kevin dropped us off at Pine Shack Frosty, where Quoi and I got burgers and milkshakes. Needing to wash my hands, I noted that the restrooms were single-occupant, and the women’s room was open, so I used that one, because, why wait?

While I was inside, a little girl and her mother were outside; the little girl needed to use the restroom, and refused to use the now-open men’s room, insisting that she had to use the women’s room. She was very surprised when I walked out (exclaiming “oh my god!”). The mother, of course, was quite amused, her point having been proven in about the best way possible.

At the restaurant, Dodo and Half Portion, a couple from Israel, sat at the table next to us, and the four of us decided to split a room at the Seneca Motel; we got a three-bed room (actually, a two-room “suite”). With four people splitting the cost, it wound up being a very cheap hotel stay for each of us.

Quoi and I went to the Dollar General to resupply. I bought the store’s entire supply of Snickers bars (that is, the one regular-sized bar they had). With the limited selection they had, Quoi had to go to the (much more expensive) grocery store down the street to find everything she needed.

We also learned that there is a new fire near the trail, the Klamathon Fire near the California/Oregon border, which could easily threaten the PCT. We’re still a few weeks away from that area, but we’ll have to keep an eye on it, because it may require detours if it encroaches on the PCT, or is still burning by the time we get there. For the time being, though, the trail has been closed for a short distance in the general area of the fire, which is only 5% contained.

Tomorrow: with all of our chores done, we just need to get breakfast and return to the trail. Then, 18 miles to the campground in the south end of Lassen National Park, which has a bear can requirement.