My alarm went off at 3:30 as expected, and I managed to get up before the snooze timer rang the alarm again. It helped that it was fairly warm overnight. As a result, I was actually ready ahead of time, and we got started at 4:20, ten minutes early.

This section of the trail has been marked with reflective diamonds nailed to the trees, which made following the trail a lot easier in the dark (not that it was really that difficult). They weren’t really necessary, but were much appreciated.

The day started with two short uphills. Neither were particularly steep, and in the dark with no sun shining on us, they were quite easy to hike.

Once the sun rose, and the trees thinned around the trail, Mount Lassen again came into view, a bit larger than the last time we saw it. 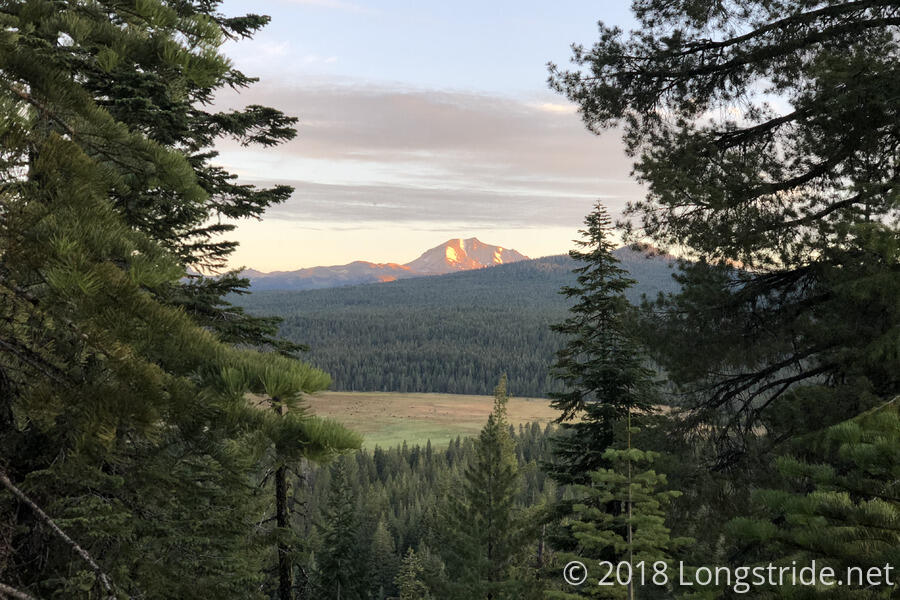 Mount Lassen in the Morning Sun

Quoi and I took our first break just short of six miles, at the trail’s crossing of the North Fork Feather River. Entering a valley and going down towards the river, the air got noticeably colder, and in shorts (and with my fleece not easily accessible), I was somewhat uncomfortable there, and left much more quickly than I might otherwise have.

I reached the Lassen Volcanic National Park a little before 9, and continued on to my first detour of the day: Terminal Geyser. Located down a short side trail not too far into the park, the detour was well worth it. The air smelled of sulfur even before I got to the trailhead, and it only got worse as I proceeded down the quarter mile trail to the geyser, which was continuously spewing steam into the air, roaring as it did.

After observing the geyser for several minutes, eventually tiring of the smell (which, I later noted to Quoi, “Finally, something on the trail smelled worse than I do.”), I returned to the trailhead and sat down for a break.

With the early start, and much easier terrain than even what we’d had in recent days, I set a new distance record, hiking 12.7 miles before 10 (actually, more like 9:20, when I started down the trail to the geyser).

After Terminal Geyser, the next scenic diversion was just over a mile away: the loop trail around Boiling Spring Lake. The lake, which was a milky-white-blue color, looked to be fed by several hot springs, and all the land adjacent to the lake looked barren and desolate. From a vantage point above the lake, Mount Lassen came into view again, a reminder that the hot springs and geysers are connected to the volcano. 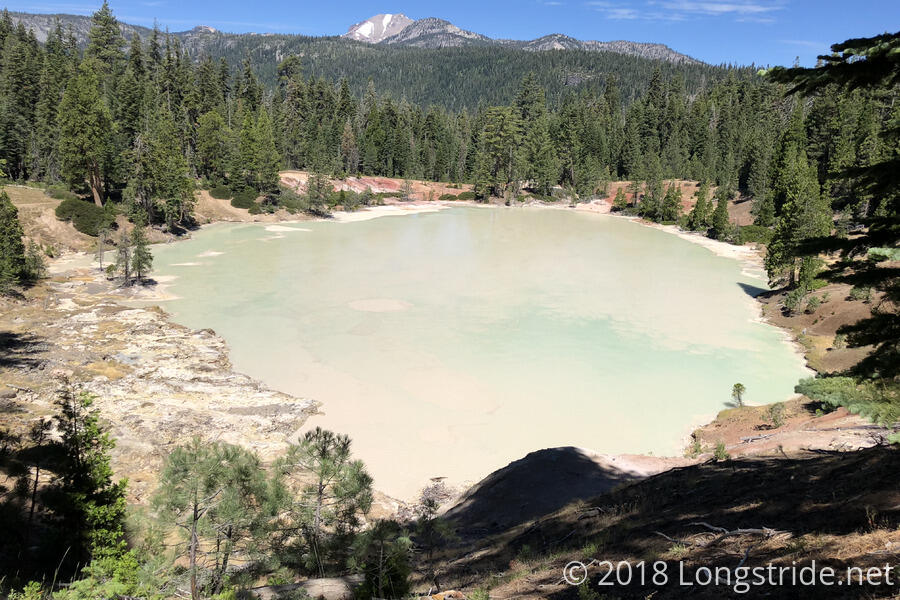 A couple miles later, I arrived at our intermediate checkpoint, the Warner Valley Camp, setting a personal distance record there as well: 15.5 miles before 12. I took advantage of the campground’s trash can (for all one day’s worth of trash I’d generated since leaving Chester). The pit toilets were also incredibly clean — they even had air fresheners hanging.

While I was waiting for Quoi, a thru-hiker from 2002 came over, and we struck up a conversation. Also a software developer, we wound up talking for half an hour largely on that field, and his perspective on things since he was in his 70s, and so had been doing it for quite awhile longer than I have been. He also remarked on how hiking the trail has changed since then. Back then, there was no gps or mobile phones, and it was a lot harder to plan a hike in detail because the available resources were fewer. He likened hiking now to almost being a march, since hikers often plan out where they’re going to be each day, rather than hiking until they get tired. (It’s certainly a different way to hike, but I much prefer knowing what’s coming ahead. The main reason to have a plan is to know when and how you can deviate from it and still be successful.)

I hadn’t planned on taking a long break at the campground, but Quoi took longer to arrive than I expected, and so even though it was only three or four miles since my last break, I’d grown hungry waiting. 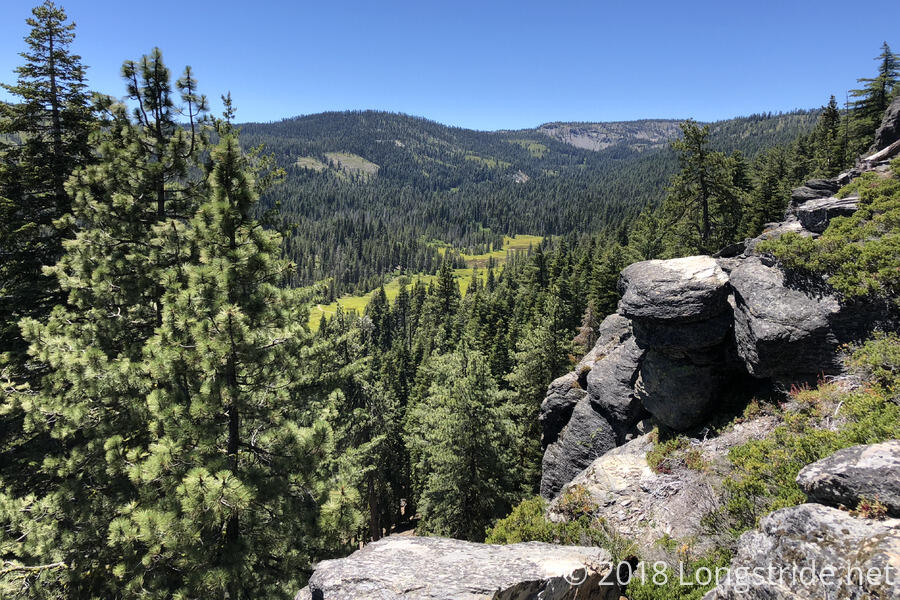 I set off again ahead of Quoi, heading up the last steep climb of the day, out of Warner Valley, and stopped about four miles later at a campsite near a creek to rest my feet. It was hot out as well, and that was sapping my strength. The shade there was somewhat invigorating, and let me push on another 3.5 miles to the Lower Twin Lake, where I stopped for dinner.

Quoi caught up as I was finishing dinner, and I proposed a crazy idea: once we got to the northern boundary of the park, if it wasn’t too late, and we still felt good, we could push an additional 4.1 miles (all downhill) to Hat Creek, giving us a new record (34.9 miles) just one week after we both set personal distance records. The land surrounding the creek, according to our guide, is fairly flat and covered with pine needles, so we could even go a tenth of a mile past the creek and have a 35 mile day. Quoi was immediately enthusiastic about this idea; I was immediately regretting proposing it, because it was now an hour and a half later than it was when I first had the idea, roughly the time it’d have taken us to hike that extra distance.

We began hiking again shortly before 7, lofty distance goals in mind. As the sun began to set, the trail turned westward, and for almost an hour, it seemed, we were hiking directly into the sun (and in the area where there had been a forest fire, no less, so there was no cover or shade). 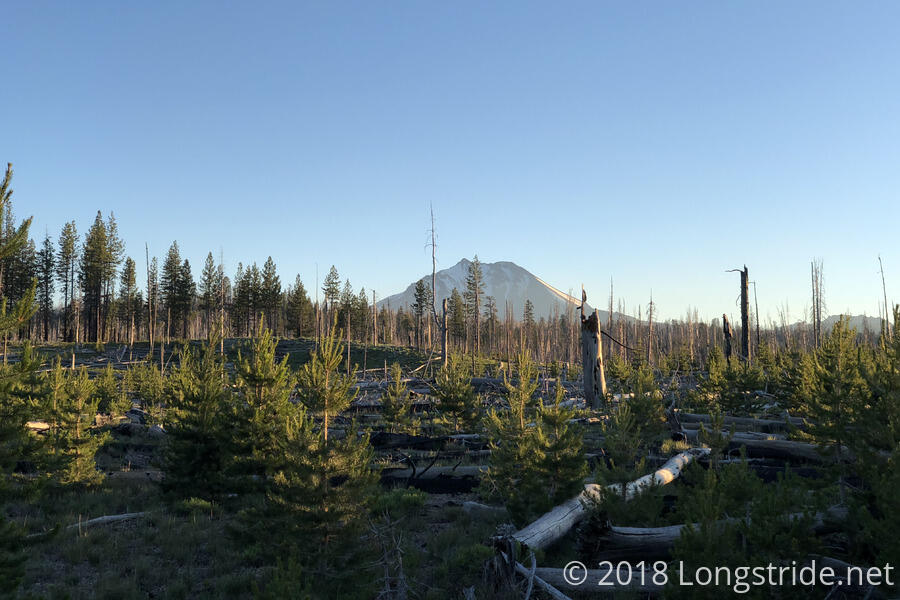 Right around sunset, I stoped suddenly because I saw a deer. Now stopped, we decided to take a break there, pretty much in the middle of nowhere, since it had been almost six miles. While we were there, the deer continued to munch on grass and wander around us, not the slightest bit deterred by Quoi shouting at it to go away. (In English, French, and Spanish, just in case it understood one of them better.)

I was pretty tired at this point (we’d been hiking for 16 hours), and my feet were rather unhappy, so I suggested that we probably shouldn’t go any further than the park border. Quoi still expressed enthusiasm for doing the 35, but I could tell neither of us were likely to be in a condition to pull it off once we got to the border. 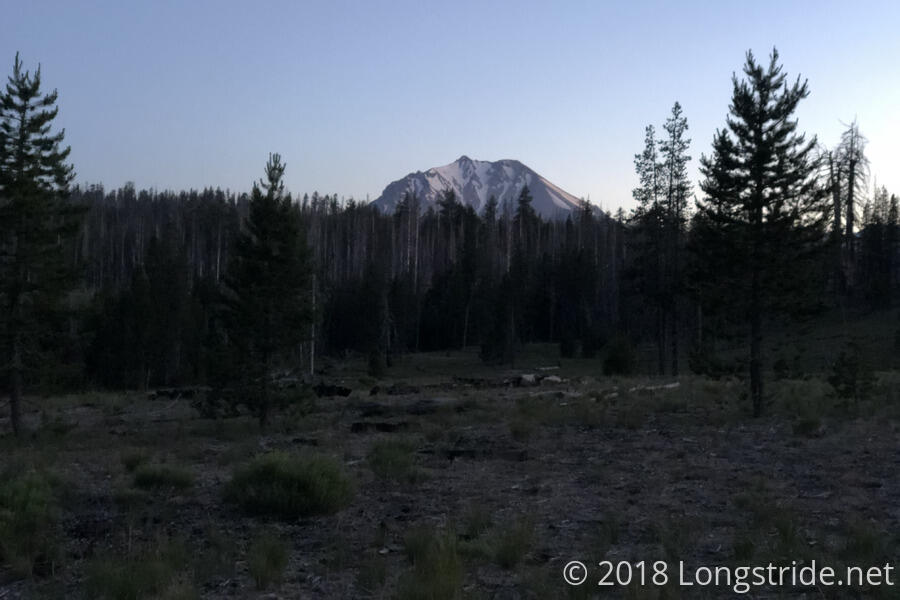 By the time we made it to the park border, an hour after sunset, we were both tired, our feet hurt, and we were quite ready to stop. We quickly set up our tents (trying not to disturb the one other person that was camping there), and tried to get some sleep after our very long day.

Tomorrow: leave early, charge 11 miles downhill to Old Station for a burger and afternoon siesta, and then take on the desert-like Hat Rim, going another 18 miles to the next good source of water, a water cache.