I had my alarm set for 5 am, but didn’t get out of my sleeping bag until 5:30. It was again pretty warm overnight, and I was sure it was going to be another hot day today.

It was slightly cloudy when I got started around 6:30, to a long, though not terribly steep, uphill. The trees provided a little shade, but that shade lessened as the sun moved higher in the sky.

After plowing through a section of trail fairly overgrown with brush, Mount Shasta made a spectacular appearance late in the morning.

Around 11:30, I stopped for my second break at Clark Creek, and saw some faces I hadn’t seen in awhile. Angel Baby, Puff, and 4 am were at the trailhead to the creek taking a break. I think the last time I saw them was at Kennedy Meadows, so nearly two months ago. (They had been hiking with their friend Mountain Goat, whom I first met on the AT, but she had to return home.)

I went down to the creek to get water — I wasn’t in any danger of running out; rather, all my water was getting warm, and having some cold water would help cool me down. (I also filled up my water bottle with cold water, not that it would stay cold very long, but it’d at least be cooler than it otherwise would have been.) I also took the opportunity to rinse off my arms and legs a bit; it was no shower, and they’re still dirty, but it felt good.

Humid is really not a word I would often use to describe the PCT, but it was certainly humid today, at least, noticeably more than usual. (Fortunately, not nearly as bad as East Coast humidity.) The humidity spanned a wide area; Mount Shasta, which has only a few clouds around this morning, had collected quite a few clouds come afternoon. 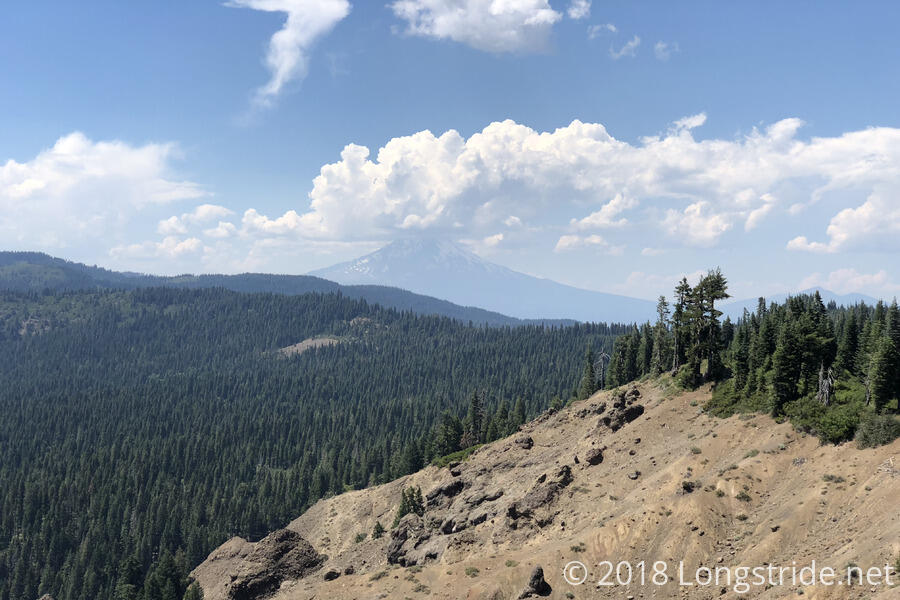 Especially in the afternoon, the trail had unobstructed views of the surrounding landscape. Every so often, it would duck under tree cover, but the afternoon was largely exposed. 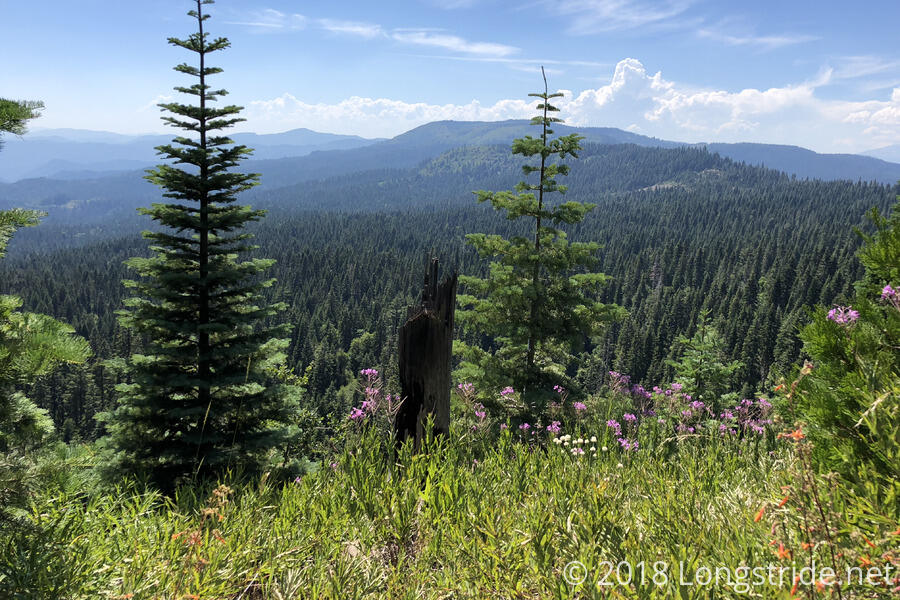 I reached my destination, Moosehead Spring, shortly after 5, after about 11 hours and 22.6 miles of hiking. The heat and humidity really made for an uncomfortable day of hiking, and this heat wave shows no signs of abating anytime soon.

Moosehead Spring didn’t have a large camping area, but by the time everyone arrived, we managed to get six tents and one cowboy camper in the available space. The spring itself was down a short side trail, and while flowing well, was not directly accessible. Rather, a small pool near the trail provided easy access to water.

Over the next hour or two, as I cooked my dinner, hikers began to arrive. First was Slide and Dr. Jones, both of whom camped at the campsite I camped at last night. Angel Baby, Puff, and 4 am were next, later followed by Calamity, whom I also last saw at Kennedy Meadows.

By then, I was already in my tent, ready to avoid bugs and get to sleep early enough to actually start at 6 am tomorrow, which should be about 24 miles to a campground on the McCloud River.