I had plans for another 20+ mile day today, but alas, my feet did not allow that to happen. The trail, though, did take me alongside another volcano, South Sister.

It was more humid this morning, and a bit cool as I got out of my tent and hiked past Island Lake. The air was still, as was the surface of the lake, which mirrored the surrounding forest quite well.

The trail tried to provide some views during the morning, but, not surprisingly, the views were obscured by smoke, and it really wasn’t possible to see anything in the distance.

I stopped for a break at Sisters Mirror Lake around 12:40, expecting to cook dinner there. However, there was no shade, and my water was taking forever to filter. I decided instead to just have a snack, and do dinner at my next break, which I expected would be in about seven miles. At least there was a nice view while I was at the lake.

A small blister on my pinky toe began to grow larger, making walking a bit of a pain, though once I got going, I was largely able to avoid noticing it. This got harder as the day progressed, though.

After leaving the lake, the trail wrapped around a mountain, entering the plain between South Sister and the mountains to the west. Dry, desolate, and treeless, the plain offered nice views of Rock Mesa, to the east of the trail, and South Sister, behind the mesa. A smoky haze lightly obscured South Sister, the southernmost of three related volcanoes, is the third-highest mountain in Oregon. (Middle and North Sister, the other two in the trio, are the fourth- and fifth-highest mountains in Oregon. The trio are also known as Faith, Hope, and Charity.) A light breeze made the exposure only marginally less unpleasant.

After passing Rock Mesa, trees returned to the trail: the trail passed over a saddle, and the north side was significantly greener.

Hot, tired, and with feet crying out for a break, I stopped for dinner at a creek not quite four miles from my last break. My water filter continued to be very slow, though spending an hour filtering water at lunchtime lessened the time it took to have enough ready to start cooking dinner. While I was cooking dinner, I saw the first dog on the trail that belonged to a long-distance hiker since Idyllwild.

As the sun dropped over the two hours I was at the creek, it got much cooler, especially in the shade, and I wound up having to put my fleece on while I was sitting there to stay warm.

Mesa Creek, originating mostly from South Sister, but which largely flows in the valley separating South Sister and Rock Mesa, was next crossed by the trail as it flowed through a meadow. 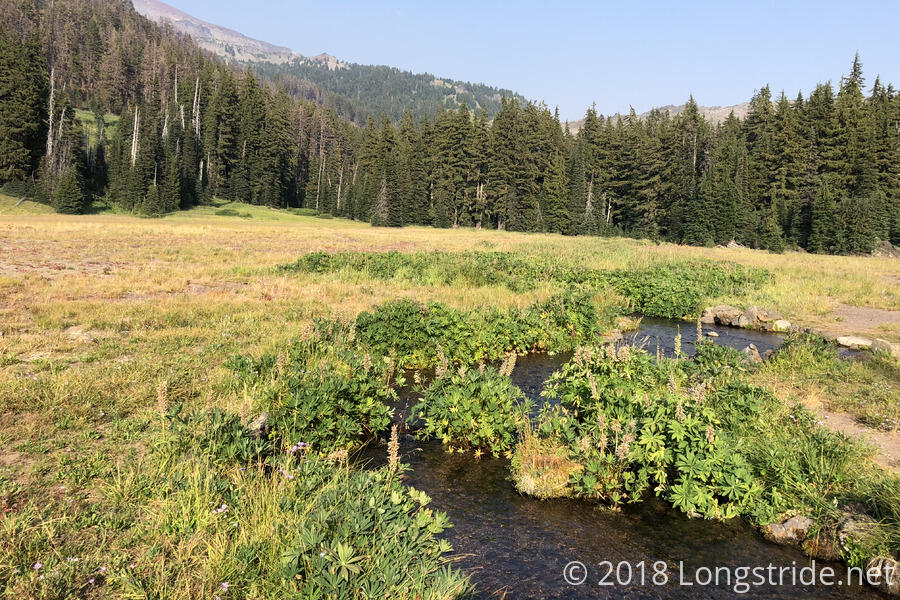 Beyond Mesa Creek, the trail climbed up to follow along South Sister’s western side. I trudged up the mountain, through a burn area, but with the blister on my toe now hurting with every step, I only made it another mile and a half to a campsite before I had to stop for the day. Stopping At 6:30, fairly early for once, was pretty nice by itself, but getting off my feet and being able to lie down and rest was even better. At 17.6 miles, this was my shortest day since leaving Ashland, which was somewhat disappointing, but going any further just wasn’t going to happen with how much my feet hurt and how tired I was.

Using a small pin that I had, I popped the blister on my toe. This was probably not the most sanitary way to do it, but it had to be done. Another day of hiking with the pain that toe was giving me was not feasible.