I opted to not set my alarm last night. I still got up around 6:20, which was not much later than I would have gotten up had I set my alarm (and then proceeded to hit the snooze button several times), so I considered it a win.

That said, I really didn’t get to sleep until much later than I intended, because I had a hard time falling asleep because my feet hurt and demanded attention.

I started hiking around quarter after seven to warm air with an occasional cool breeze. The trail was nicely forested, and while shaded in the morning, it would have been quite bright with sunlight around noon.

The trail was pretty easy this morning (and really, all day). I stopped for my first break after about two and a quarter hours, going 7.5 miles!

Even with the smoke in the distance, the views were nice. Still, it’ll be great if the fires get put out and the smoke clears.

At the Warm Springs River (which, despite the name, was actually fairly cold water), I got water for dinner, then decided not to have dinner because my water filter was being slow and there was a water spigot at a campground up ahead. Instead, I just had a snack and then took a short nap.

The trail was largely a green tunnel for the next section for the next while, with an uphill and then a nice long downhill. Near the Joe Graham Horse Camp, where I stopped for dinner, a meadow peaked out from behind the trees. 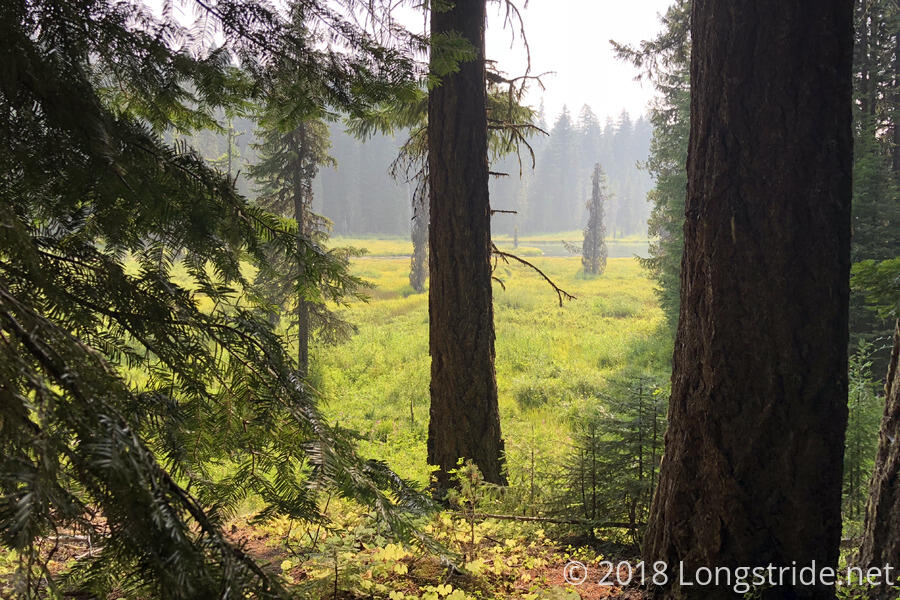 The Joe Graham Horse Camp was a few tenths of a mile off-trail. With 24 miles hiked so far today, I briefly considered this a possible place to stop, until I noticed that the campsites were all geared for car camping with horses, and campsites were $22/night. With potable water from faucets at the campsites, getting water was very quick, and I didn’t have to waste time with my water filter. That, and the picnic table, helped make dinner more efficient than usual, and I only spent about an hour and a half there, which was great, because almost from the instant I got my food out, bees started flying around all of my stuff; there were easily at least a half-dozen bees, if not more, and it made for a somewhat nerve-wracking dinner. (The trash dumpsters and pit toilets were also nice to use.)

After leaving the campground, the trail followed the Oak Grove Fork Clackamas River for a short while. While doing so, it became quite cool and very humid. As it departed the river, the trail climbed up to have a view of Timothy Lake. Unfortunately, the smoke in the air obscured even that. 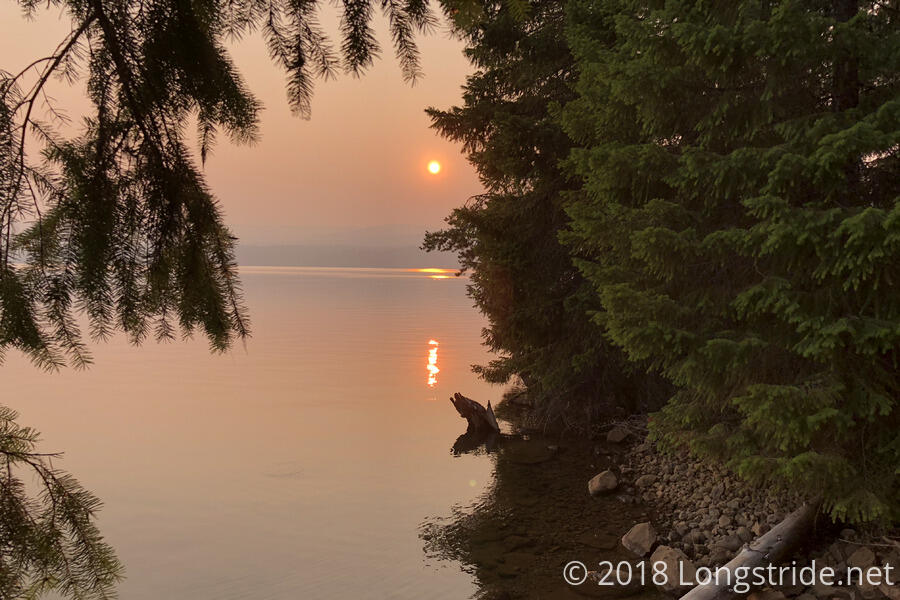 My destination was a campsite around Timothy Lake. There are a number of designated campsites around the lake, and finding a suitable one was more difficult than I expected. Some of the campsites were closed (presumably for rehabilitation). The first campsite I got to that wasn’t occupied or closed had a bunch of trash lying around. Another had dog hair shavings littering a grassy area next to the tent pad. Finally, I found one that wasn’t level, but workable. Having hiked 27 miles to there — further than I expected to go today — I took what was available. (Also, it was almost 8 pm, and the sun was nearly set.)

This puts me 20.6 miles from Timberline Lodge, so, that’s the goal for tomorrow.