Yesterday’s science experiment confirmed that, yes, two people in a tent definitely make things warmer. Naturally, that didn’t make it any easier to get out of our sleeping bags on a cool morning and start hiking.

The road was just as heavily used this morning as it was last night, perhaps even more so. Besides the cars going past, there was also a guy walking his dog. Rather, it was more like he was angrily dragging his dog by the leash. I was glad there was a reasonably thick barrier of trees between our campsite and the road, so I’m pretty sure he didn’t see me frowning at his behavior.

CareFree and I took to the trail around 8:20, to clear skies. After crossing the dirt road we stopped at yesterday, the trail re-entered forest, occasionally emerging to great views, including a great look back at Mount Rainier. 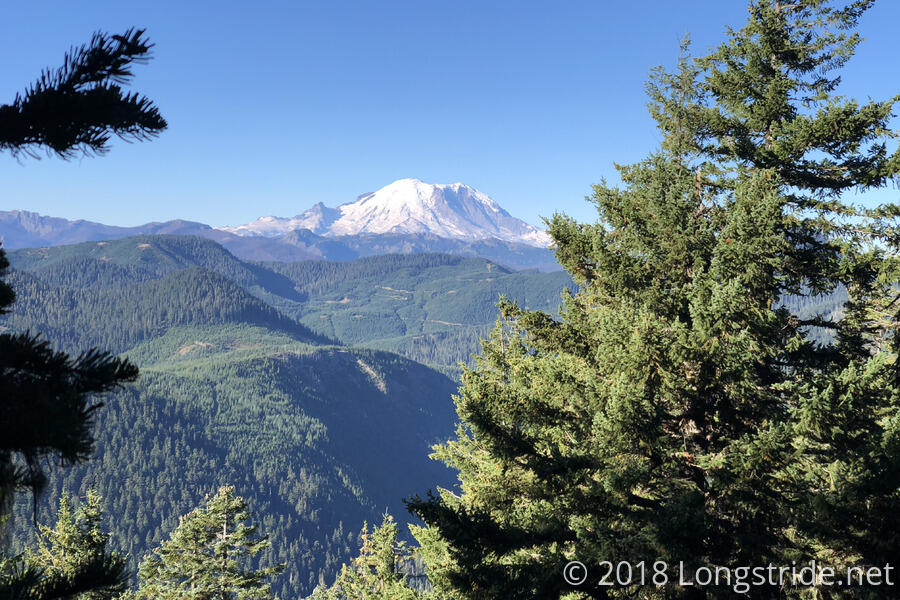 The many roads in the area also provided easy access to the trail for hunters, and a trio in camo gear passed us while we paused at an overlook. Later, we saw them set up on a small hill a short distance from the trail. We also saw an eagle flying overhead, gliding around on air currents for a minute or two before it flew out of sight.

Around 11, we stopped at a campsite at the end of a dirt road for a break. Unexpectedly tired, I laid down on the ground and basked in the sunlight; it was all I could do to not fall asleep in the warm sun. While there, Justin and Fireman passed by; I think the last time I saw them was in Trout Lake. Jelly passed us not too long after we ended our break, taking a very fast pace through the forest as we headed downhill to a spring. We were able to keep up with him most of the way, but fell behind as we approached the side trail to the spring. 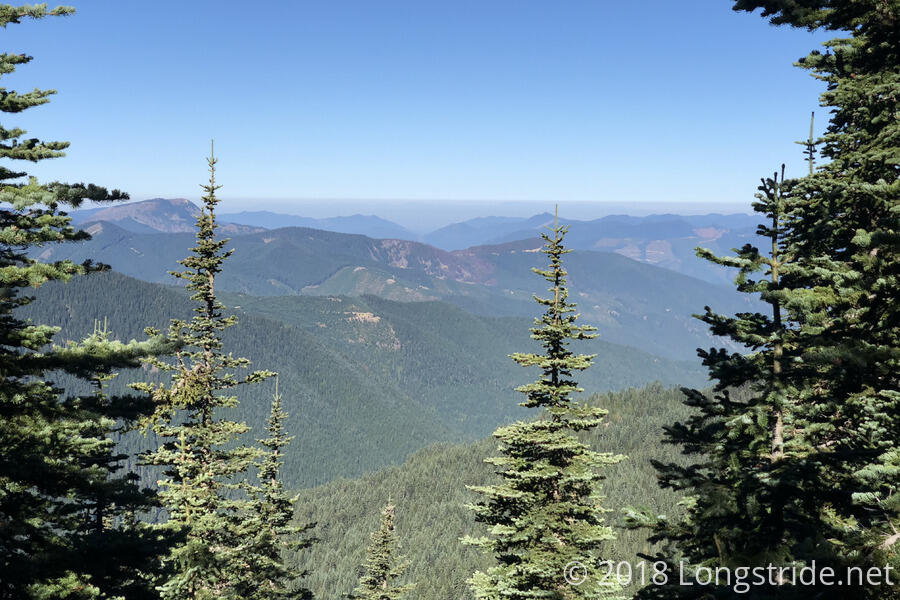 We stopped for a break at the start of the trail to the water. I wasn’t expecting to stop there, but CareFree needed more water, and several other hikers (including Jelly, Justin, and Fireman) were there for a break as well. Also, I was still tired; I must not have slept as well last night as I thought I did. I had a snack while waiting, and Jelly was kind enough to give me a caffeine pill that helped wake me up.

Now early afternoon, CareFree and I continued on, and the trail continued to alternate between being forested and exposed, warming as the day proceeded. In the exposed sections, we got plenty more views of the surrounding landscape, including another look back at Rainier, which had picked up a skirt of clouds or smoke.

We stopped for another break at a spring, to get water and cook dinner at 3:30, another seven miles up the trail. Sitting under the shade of a tree, we got some shade, which helped keep it a little cooler, though the light breeze that picked up also helped with that.

There were two random trail markers today made out of arranged stones next to the trail: one for 2369 miles, and one of a heart with an arrow through it. It’s not the first heart I’ve seen on the trail, but unless I’m misremembering, the last one was way back in California, over a thousand miles ago, the day I did my first 30+ mile day.

Later, as we crossed a clearing surrounding power lines, the sound of gunshots rang out. We supposed, from the frequency and duration of the sound, that there must have been a shooting range somewhere nearby (or someone was in the forest somewhere shooting at a tree). It was a bit unnerving to be hiking towards the sound, but eventually, the gunshots died down.

The day ended with a steep climb up to a “campsite” at the end of a dirt road. Calling it a campsite was a bit charitable; the road ended, and widened to allow for vehicles to turn around, and where we put my tent was far enough to the side of the road that it was extremely unlikely that anyone would run into us if they happened to drive to the end of the road. The ground was incredibly hard, being made of compressed road bed, which made getting my tent stakes in a big of a challenge. It was, though, warmer than it was last night, and not at all windy.

Jelly and company passed us while we were setting up, heading on to a campsite a little further ahead. Meanwhile, we took in a great view to the east, the sky turning orange as the sun began to set. 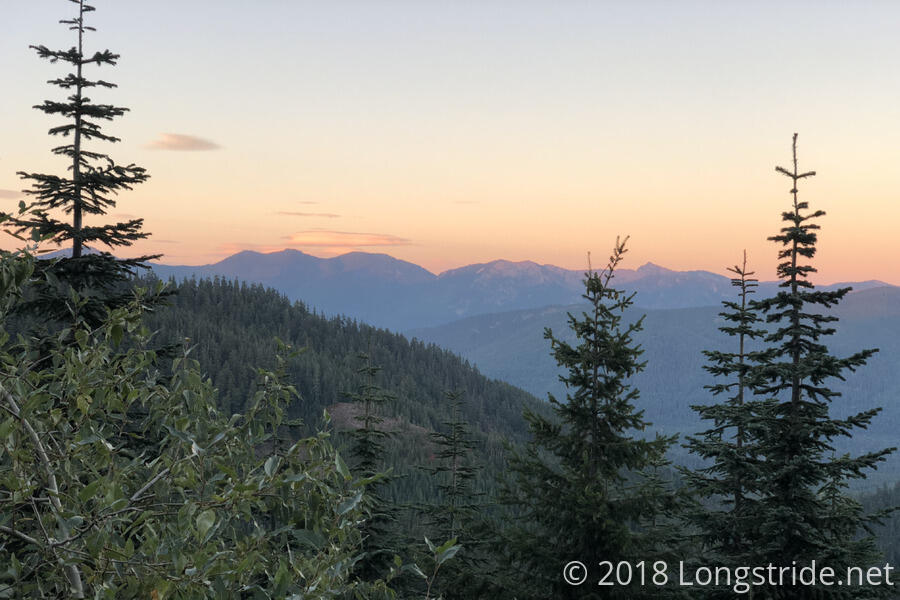 After zig-zagging our way north for a little more than 21 miles, today my longest day in over a week. Hopefully, I’ll be able to keep this pace up; I don’t expect to maintain a pace similar to Oregon, since northern Washington is supposed to be somewhat tough, but the last week’s been slower than I’d have liked.

Tomorrow: We’ll reach Snoqualmie Pass and head to Auburn for resupply and rest with my cousin.