With a 23 mile plan for today, the morning started off relatively ordinarially. It didn’t end that way.

I started hiking a bit before 7, Quoi already gone on ahead to tackle the first uphill at her own pace. The morning began with some nice views, including back to Sierra Butte, which we had hiked around yesterday. It’s always nice to be able to see your progress in the distance. 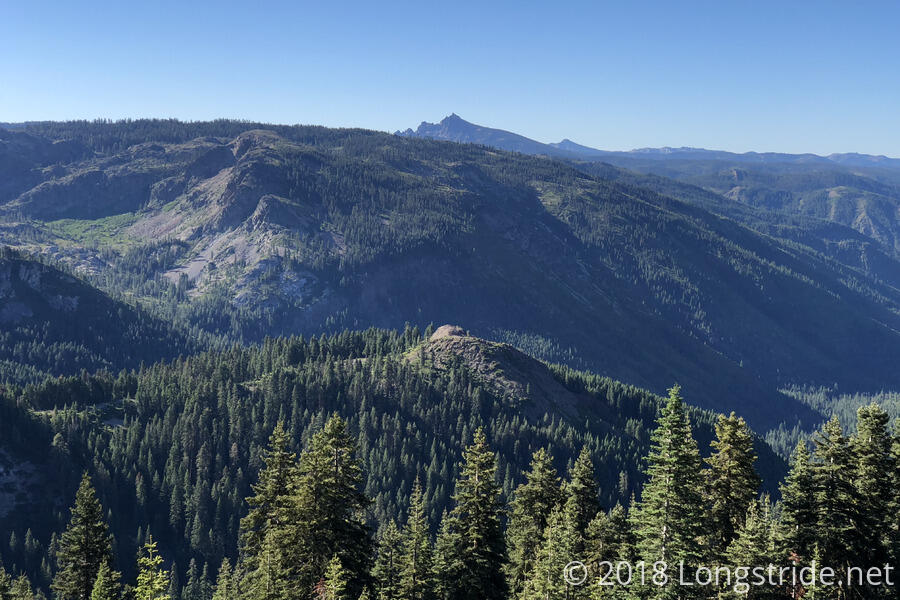 I saw quite a lot of wildlife today, in addition to the usual annoying insects. Shortly before my first break, there was a deer grazing on grass next to the trail. At my break, an insect I’ve never seen before perched on my sock (which I had taken off so it could dry). All day, there were a lot of butterflies (easily more than I’d seen any other day on the trail). There was also a nice variety of wildflowers. 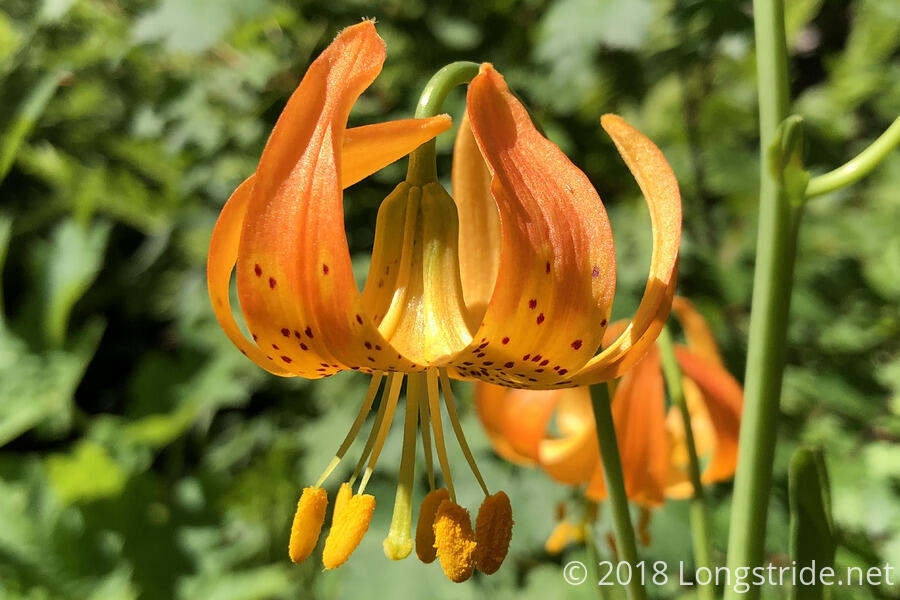 It was fairly warm all day, especially once the sun rose high in the sky. There wasn’t a particularly great amount of tree cover — the trees here don’t branch out very much, so unless the sun is low in the sky, they don’t cast very big shadows. But, there was just enough shade that you didn’t have to go too far to find a (small) place to briefly escape from the sun. 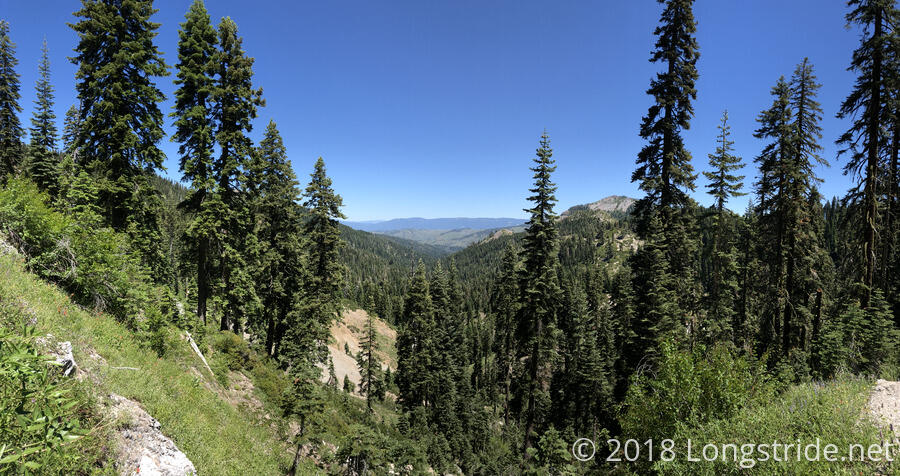 After nearly 14 miles, around 1:20, I took my mid-day break under the shade of a tree. When Quoi arrived, she suggested going ten miles further than our original plan, making for a 30+ mile day. I wasn’t initially terribly enthusiastic about that idea, but ideas are insidious beasts. I said I’d think about it, and make a decision once I got to my next break. Meanwhile, flies swarming the area found Quoi quite tasty, and continually bit her, while leaving me alone.

I stopped for my dinner break after almost 21 miles at the (very cold) Alder Spring. Quoi again proposed doing the long day, all the way to the Middle Fork Feather River, and I agreed, the idea having grown on me throughout the afternoon. There were a few places along the way we could stop if necessary, but if we went the whole distance, 33.8 miles, we’d both set distance records: Quoi’s previous distance record was 32 miles; mine was 25.5 miles. So this would also be my first marathon, and my first 30+ mile day.

We set out from the spring around 6:15 pm. The trail was largely downhill to the river, though there were a few short (and not terribly steep) uphills along the way, including one not too far after we got back on the PCT from the side trail to Alder Spring.

Along the way, I passed a heart made with pine cones on the side of the trail. One of the pine cones was missing, though (making it a broken heart, I guess), so I found one to it in its place and fixed it. I also passed a 2000 km (1243 miles) marker, drawn on the trail with leaves.

I stopped for a break a little under seven miles later at a road crossing for a snack and to wait for Quoi to catch up. I didn’t have to wait long: she was only about ten or fifteen minutes behind, which was fortunate, because the mosquitoes were pretty awful — I had to spray myself with bug repellant to have even a moment’s peace while I was sitting there. By the time we continued, the sun had set and it was growing dark.

I wanted to get as far as possible without needing to resort to using my headlamp, so up to that break (and even a bit beyond), I was pushing myself to go faster than I might otherwise have gone. With the heat, I was actually noticeably sweating, and I felt like I hadn’t been this sticky since my Appalachian and Long Trail hikes.

With the sun down and headlamps out, different wildlife was evident: besides the moths you’d expect to see, there were also millipedes, and lots and lots of spiders. After a short little uphill from the road, the trail went downhill the rest of the evening.

For the next three miles or so, the trail was pretty easy to hike, and we made good time, though we were getting progressively more tired. After three miles, at a dirt road crossing, we stopped for a break. By then, it was fully dark, and we were both tired and our feet hurt. We very briefly contemplated throwing up our tents there, on the side of the road, but opted to press on. (The mosquitoes may have had something to do with that.) We had set a goal, and wanted to see it through.

After that break, though, we hiked more slowly, due to tired feet and a steeper, more difficult, and uneven ground surface.

While I wasn’t thrilled at night-hiking (especially as late as we were going), it was pretty evident from what little I could see that, during the day, there’d be no views, and little shade, a roofless green tunnel. I wasn’t really missing anything with the night hike, besides the heat of the sun. The only thing I’d change is, it’d have been nice to start the day knowing we were going to do a long day, and have started an hour or two earlier.

That said, my feet were quite unhappy with the day’s long distance, and as it grew later and later, I got more and more tired, starting to stumble around a bit where normally I’d have been fine.

After the trail finished descending to the Middle Fork Feather River, it crossed via a bridge. It was a bit eerie crossing. We could easily hear the sound of the river an unknown distance below the bridge. But all we could see was the bridge, illuminated only by the light of our headlamps. For the few moments that it took us to cross the river, it was as if the only thing that existed was the bridge, surrounded by a black void.

After we crossed the river, it was a short distance to the campsite, which we reached at 11:20 pm. On our way, Quoi saw light coming from above us, up ahead, and said she thought it was an animal. My initial thought was that it must have been someone’s headlamp. Then we got a better look at it: two eyes, reflecting light. Definitely an animal. Quoi saw it turn around, and she saw its tail: it was a mountain lion. Ok, that was reason to be a bit nervous. Then, I saw a second, dimmer, pair of eyes. There were two of them!

We didn’t have long to go to get to the campsite, and before we got there, the eyes disappeared, hidden by the trees. Nevertheless, we were on guard while we set up our tents as quickly as possible; one of us was shining light and looking towards where the mountain lions had been. Fortunately, though, we didn’t see further evidence of them the rest of the night.