After our epic-length day yesterday, Quoi and I didn’t really want to get up early. But, with a big climb immediately after our campsite, we had to get going sooner, rather than later, before the sun got too high and made us miserable. Fortunately, it was warm overnight, and it didn’t take a lot of effort to get out of my sleeping bag and get moving.

Before I left camp, I noticed a very large slug near my tent; I think it’s the biggest one I’ve seen anywhere, not just on the trail. (The slugs that covered my tent one night in Shenandoah were tiny in comparison.) 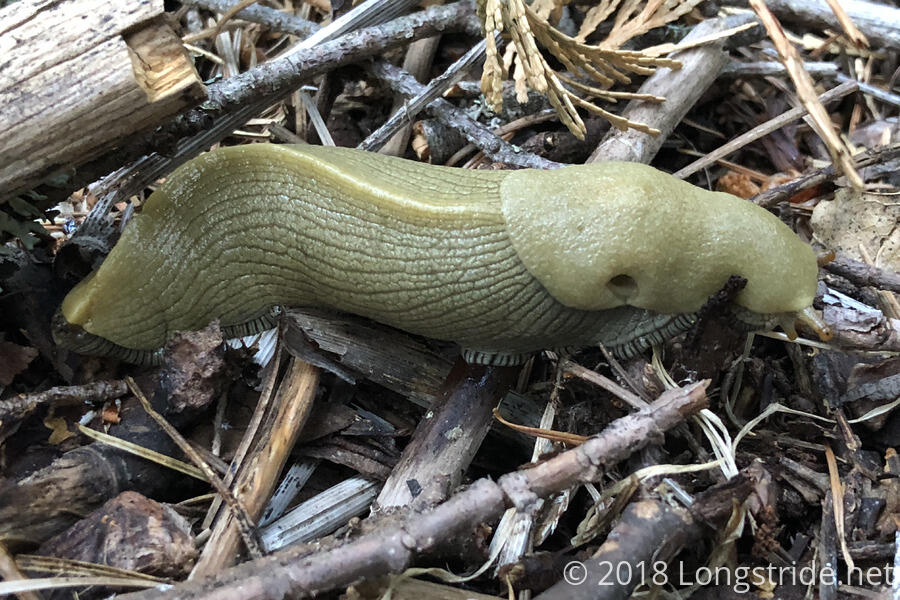 I got started a little before 8, and stopped about an hour later, about two miles down the trail, at a creek crossing the trail. Despite there being a river at our campsite, I didn’t get water there: there wasn’t a clearly obvious path to the water (likely there was one, but I didn’t want to spend the time looking for it), and I had enough water to make it to this creek, so why carry more water uphill to there?

The water was cold, and the air noticeably cooler near the creek. This made for a relaxing break, but I was also happy to get moving again to warm up.

With the morning‘s uphill, I wanted to stop for a break after about five miles, at a small campsite. I saw the campsite, but kept going because my trail guide had the wrong location for it, and claimed it was another tenth of a mile down the trail. (It wouldn’t be the first time there were campsites not listed in the guide; I figured this was one of those times.) However, past the campsite, the trail began to run along a steep hill, so there was very little space to stop anywhere. While I was looking for a place to stop anyway, I saw Quoi sitting on the uphill slope, practically sitting on the trail itself. Still needing to stop for a snack, this seemed as good a place as any to stop, so I joined her.

Besides being cramped on the hill next to the trail, it wound up being a pretty terrible location for two other reasons. The mosquitoes were bad, of course. But not long after I sat down, a guy leading a train of three horses rode by, and we had to get off of the trail so that there would be space for the horses to pass.

Most of the day was like a “green corridor”: trees and bushes along the sides of the trail, but no substantial cover above the trail, so the shade they provided decreased as the sun got higher. It was hot, and also a little bit humid.

I took my second break a little early, at the Lookout Spring. The spring, water collected into a metal half-pipe, was quite cold, and flowing well. I rinsed my feet and legs off a bit — it felt great — and sat down in the shade next to the spring on the side of the trail for a snack. While I was there, a few bees and wasps also came to collect water from the muddy pools adjacent to the spring’s flow on the trail, and a chipmunk even dared to come to the edge of the trail to look around before darting back under cover.

Just beyond the spring was Lookout Rock, which provided a great view of the valley below the trail.

Quoi passed me while I was taking videos at Lookout Rock. I caught up with her again shortly after, at a little library on the trail: a large waterproof tub of books, available for hikers who wanted them. Naturally, Quoi took one. (The largest book in the library, of course.)

Although this part of the trail was not quite as exposed as it was earlier in the day, it was still pretty hot out. The heat sapping my strength, I was tired, and hungry, and I stopped after only another two and a half miles for a short break.

After another two miles, I “caught up” with Quoi at a dirt road crossing. She had been behind, but she took a “shortcut” to try and catch me before I got to the creek I was planning on making dinner at. She asked if I wanted to go into town (as in, now, instead of tomorrow). Hot, hungry, tired, and definitely not recovered from the nearly 34 mile day yesterday, I said yes.

We followed the dirt road back to Big Creek Road, the larger paved road we had just crossed, and began trying to get a ride into town. While I was collapsing my trekking poles, one of the locks (made of rubber or plastic, I’m not entirely sure which) cracked, so I’m going to have to get the poles replaced at some point.

We didn’t have to wait very long for a ride; the second car that passed by stopped to pick us up. The driver, Scott, was pretty chatty.

He dropped us off in front of Pangaea, a restaurant he recommended. The food was good, though both of us felt we could eat a lot more, even after we ate dessert. There was a nice relaxed atmosphere in the restaurant, until some local musicians set up in the front of the space and started playing. It was somewhat folky music (and they had an accordion), and I generally liked it, but it was almost painfully loud and I was very much looking forward to getting out.

While we were sitting there taking advantage of the WiFi, a woman from the next table over introduced herself as Jennifer, and asked us if we had a place to stay for the evening. We said no, and she said that she was a trail angel, and invited us to stay at her place this evening, in the teepee in her backyard.

The last time I had stayed in a teepee was at Woodchuck Hostel in Damascus, VA on my Appalachian Trail hike. It was a bit rainy that day, which posed a problem there, but on the PCT, where I haven’t seen any meaningful rain so far, a teepee should be pretty dry.

Of course, we said yes, and after we waited for Jennifer to finish eating, she took us back to her house. (We walked, since it was only a few blocks away.) Jennifer and her husband Mark graciously hosted us, letting us use their shower and laundry room. The dog, Boris, demanded to play fetch, while the two cats mostly ignored us.

The teepee was well stocked: it had a central fire pit, and there were several beanbag chairs and large, heavy sleeping pads that were way more comfortable than the ones we had.

Still being hungry, I ate a bunch of snacks before going to sleep.

Tomorrow: resupply and deal with our bounce box, and then get back on the trail.

This post contains links to amazon.com. As an Amazon Associate, I earn from qualifying purchases.
Pacific Crest Trail, 2018
« (Day 103: The Longest Day) Previous Entry
Next Entry (Day 105: An Unexpected Zero In Quincy) »