Today finished up this stretch of roadwalk, and confirmed my general feeling of a need to slow down a bit.

The rest of the evening went uneventfully, and while it did rain overnight, by morning it was down a a light persistent drizzle. It wouldn’t be the greatest, walking along roads in a drizzle, but it could easily be far worse. And, it was relatively cool out.

Last night, I decided to slow my pace a bit. My original plan called for a thirteen mile day today to a campsite, followed by nearly twenty miles tomorrow to a shelter and then ten miles into Hancock the day after. Instead, I’m only going to add an additional day, going only ten today to a shelter, then ten tomorrow to a campsite, another ten to a shelter, and then ten into town. I still wind up having to use my tent the same number of times, but it’ll give me a little chance each day to recover some. This is not the longest stretch I’ve done (in distance or days) without a zero, but it is the longest at the beginning of a hike, so it’s been much more tiring than it usually would be.

Having made that decision, I didn’t rush to get started this morning, leaving the shelter around 8:30. I left the remainder of the wet-wipes I didn’t use for future hikers as well. (It was a large box, the gas station didn’t have any small ones, and I didn’t want to carry that much extra weight.)

The roadwalk began without much fanfare, continuing to traverse rural western Virginia. About half an hour down the road, I met two older guys in bright orange shirts (roadwalking done right!) walking on the road towards me.

If I understood them correctly, either they were caretakers for the shelter, or knew the caretakers, and were happy to hear that the shelter was in good repair. They also took my trash, which rather exploded in volume thanks to the trip to the gas station yesterday.

Today’s roadwalk was far less scenic than yesterday’s. After winding through sparsely populated residential areas, the trail reached the “town” of Siler, which once (but no longer) had a small grocery store like the one in Gore. (Supposedly, there was a water source across the street from the store, but William has so far been unable to find it.)

At some point during the roadwalk, I passed 100 miles on the Tuscarora Trail. Normally, this milestone would be cause for at least a little celebration, but I didn’t even realize I passed that milestone until after I checked the mileage at my destination today.

For some reason, I thought the roadwalk would end shortly after about three miles, in Siler, but it wound on for a further three miles. The paved road eventually gave way to gravel. Before finding out if the road just ended, or actually went somewhere, the trail diverted from r road and stated climbing up a hill into more private property. Now clear of any possibility of being run over, I stopped for a break.

This location was significant for one other reason: it’s the first time (at least that I’ve noticed) that the Great Eastern Trail ran along the Tuscarora alignment. I suspect this is not where the GET first joins the Tuscarora, but it is the first time I noticed a marker.

The Great Eastern Trail is roughly 1600 miles long, a consists of a patchwork of other trails and roadwalks that will eventually stretch from the northern terminus of the Florida Trail, to the North Country Trail. It’s intended to be a western alternative through the Appalachians to the Appalachian Trail.

The morning had been a light drizzle or fog, but now, approaching noon, the sun started to try to come out. Unfortunately, it never really succeeded, but it was nice that it tried; it had been kind of a gloomy morning.

The trail continued uphill through more private property, and it was an exhausting climb. By the time I arrived at today’s destination, Shockeys Knob Shelter, I was completely drenched in sweat; I couldn’t remember the last time my clothes were that wet before.

I think my problem was, after six miles of roadwalk , and the decision and to “take it easy” today, I’d forgotten to switch out of low-energy mode for the relatively steep (compared to the road) uphill on trail. It was as though trying to drive at highway speeds in first gear — doable, maybe, but you’ll redline and overheat something at best.

Around 12:30, on the way up, I passed a marker post with writing carved on it, but was unable to figure out what the writing said. The post itself, though, appeared to be on the Virginia-West Virginia border, so this marked the last time I’ll be in Virginia this hike.

I arrived at Shockeys Knob Shelter a little before 1. It was a nice shelter, though, I thought, with a bit of an odd design — the shelter’s front porch (with integrated bench and table area) only covered half the front of the shelter, so if you were not paying attention, it’d be possible to step off the edge of the shelter and onto the stairs a few feet down.

It also had a bunk area with a hand-made wooden ladder that (later) I was surprised to find wasn’t actually attached to anything. Large windows in the front and back let in lots of light — when the sun was cooperating, anyway.

First order of business was to get water. Armed with information from William yesterday, I went with my bear line, in addition to my water bag.

The “spring” for the shelter was a well, about four feet deep, with a pool of foul-smelling water and leaves at the bottom. I clipped the carabiner on my line to the handles on my water bag and dropped it in. After several tries, I got a short stick to prop open the bag (which is not rigid) so that water would actually flow in; and a long branch to push the bag into the water as far as it would go.

I could only collect about a liter and a half this way; I had to make two trips. It was a fair amount of work for pretty lousy water, but, I didn’t really have enough in my pack to both cook dinner and ensure I’d have enough to drink tonight and tomorrow morning. 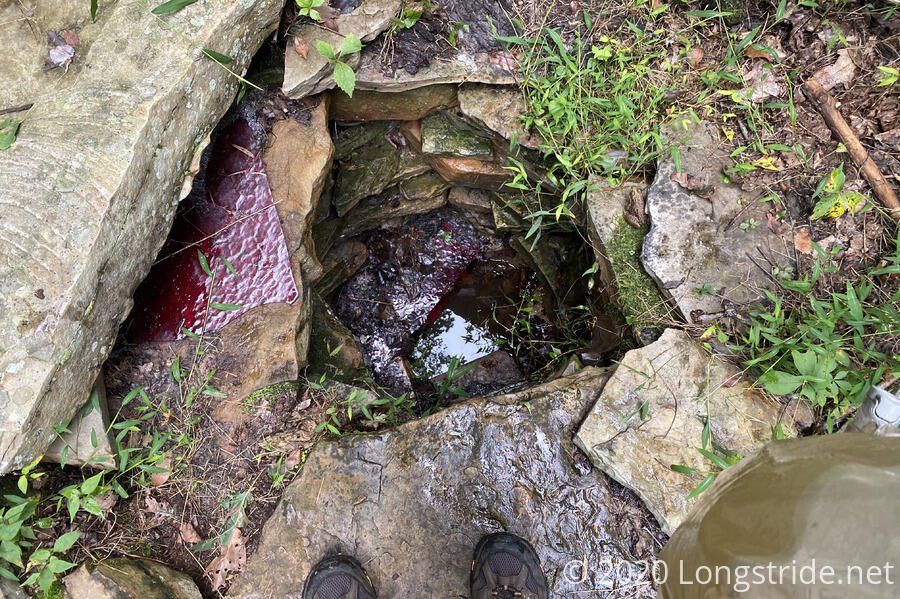 A “Spring” — The water is four feet down, in a pool filled with leaves and nasty smells.

Back at the shelter, while I was filtering water, a large grasshopper landed on my rope. 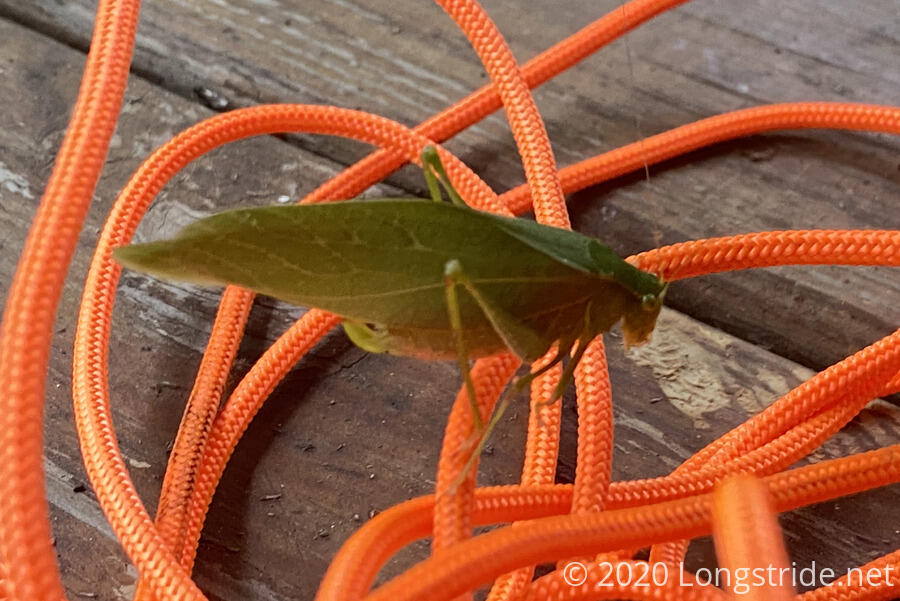 Later in the afternoon, it started to drizzle. I thought that it would be nice if shelter’s had gutters usable for rainwater collection. (I think there might be at least one shelter on the AT somewhere that does.)

Given how gross the water looked, I decided a single filtering was not sufficient. After filtering the water, I dumped the “clean”water back into the dirty bag and filtered it again. Then, when that was done, I dumped the crud out of the dirty bag, backflushed through the filter to clear out the filter a little (and also get more water to rinse the bag out more), dumped that quarter liter or so, and then filtered it all again.

It took a fair amount of time, but in the end, I was left with water that only tasted slightly kind of funny, which I considered a win, given the source.

Once I finally got around to cooking dinner, I noticed a spider in its web hanging from the roof’s overhang beyond where I was sitting. While I was eating, I saw a few insects land and get stuck on the web, and it ran out and grabbed it’s treats. 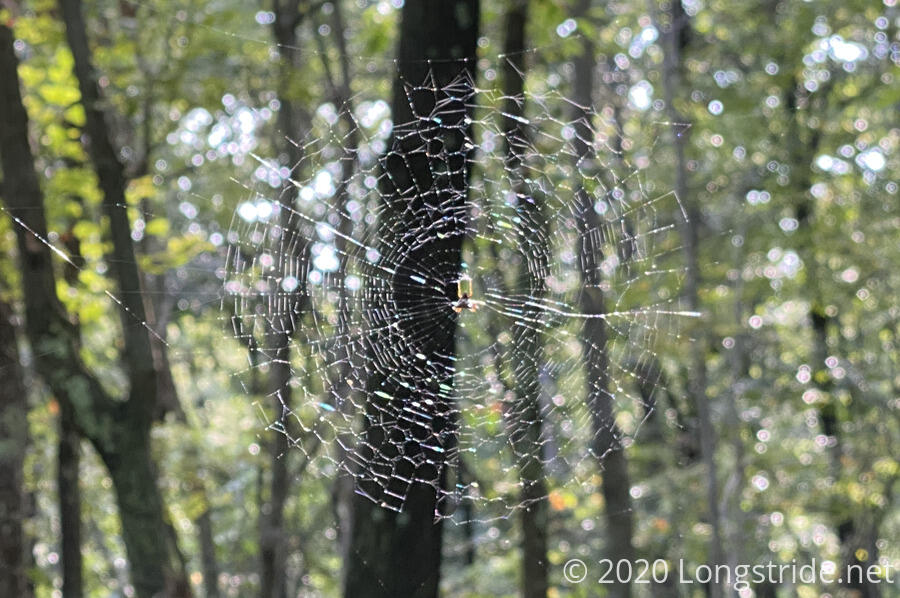 Dinner provided me time to read through the shelter’s log, which had a surprisingly large number of hikers expressing how beautiful or amazing the shelter was. (Maybe I’m a bit jaded; I did think it was a nice shelter, but I thought some of the other PATC shelters I’ve seen so far were nicer.) I did note Nukon’s log entry from when he hiked through here last year with Pat.

Entries in the log also made note of frequent porcupine visitors, so once I was finished with dinner, I collected my stuff a bit more than I usually do in the evening, so that if I needed to relocate to the shelter’s top “bunk” platform, I could without too much fuss.

Every so often throughout the evening, something fell from the trees high above the shelter and hits its metal roof. The result was a very loud clang that startled me the first couple of times it happened. Hopefully there wouldn’t be too many falling objects during the night!

I felt surprisingly tired for “only” a ten mile day, though, it makes sense, since the previous five days all saw fifteen miles or more each day, and I’m still at the beginning of a hike before my trail legs have come in. (Or the hiker hunger; after my main mac & cheese course, I wasn’t able to eat the ramen portion of dinner.) Last’s night’s decision to split two days into Hancock into three days seemed like a wise decision.

So I set a 7 am alarm, with a plan to go about 13.5 miles to a campsite in the Sleepy Creek Wildlife Management Area. I’ll be tenting, so with no shelter to enjoy, there’s no reason to get there extra-early.