Today was a fairly nice, easy day, a successful execution of my “slow down” plan to get to Hancock without hurting myself.

Despite a 7 am alarm, I was awake at 6 am. Feeling an urge to get moving, I got up, rather than laying in my sleeping bag.

It was foggy out pre-dawn, which meant that, since I didn’t memorize exactly where the shelter’s bear pole was, I had some difficulty finding it. It took several minutes of vaguely wandering around in the general area I thought it to be in, while keeping the shelter itself within view so that I wouldn’t wind up lost.

Despite warnings in the logs, there appeared to be no intrusions from porcupines last night, and if the trees were making cymbals of the roof, I slept right through it.

I hiked out of the shelter before 7:30, quite a bit earlier than I had planned. As a result, there were a couple of views near Shockeys Knob that I didn’t really get to see. Instead, I had to be content with sunbeams shining through the forest. 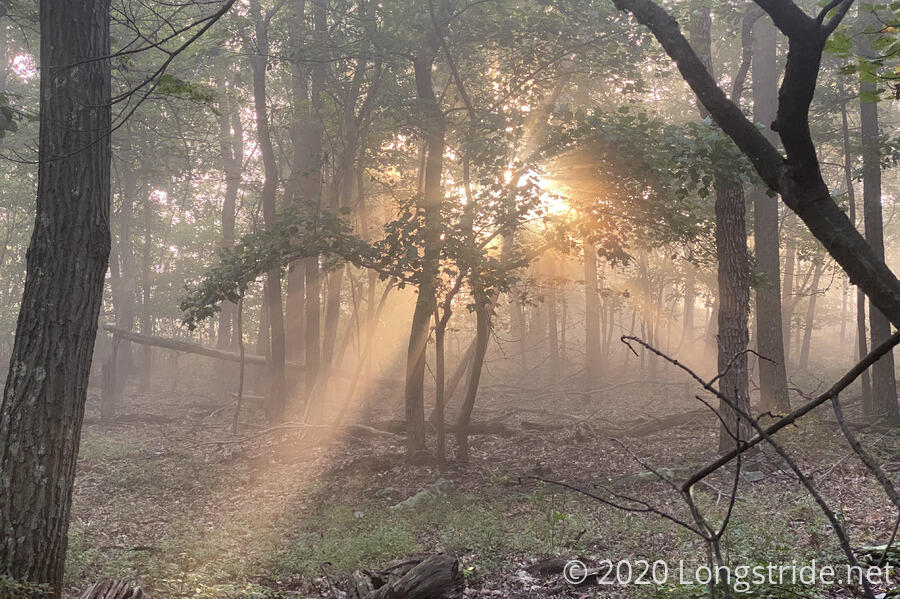 Sunbeams in the Fog

With a short day planned, had I not been so tired, I might have been a bit more adventurous and taken a “mini knife edge” trail to summit High Rock. We’ll see; maybe there’s an easier to access trailhead and I can come back and do a small hike to check it out.

Part of the trail this morning was particularly frustrating. The trail had turned onto a dirt road. The road itself appeared to be still used, and there were deep ruts that had collected pools of stagnant water. Additionally, both the road and the area beside the road were overgrown, so it was a slow hike, and my shoes and socks picked up a fair amount of moisture from the plants.

Along the road, I passed the side trail to the campsite I’d originally intended for yesterday. What I didn’t see, though, even though I was on the lookout for it, was a spring a few tenths of a mile afterwards. It’s possible that I missed it given my annoyance with the trail, but I’m still surprised I didn’t see a sign for it or anything.

Later, the trail passed by the “ruins” of a fire tower. The tower itself is disused, I assume, since there is a lot of wood planks that are collected inside the base; also the Tuscarora guidebook calls the tower “abandoned”, but the metal structure, ladder to the top, and upper platform still appeared to be intact. It would have been nice to climb up and get a nice view, but this felt more risky than necessary, so I just took pictures of the tower and hiked on.

Now, by late morning, the sun was out, there was a light breeze, and joy of joys, I was actually starting to dry out. My pants felt drier than they had anytime since getting back on the trail. 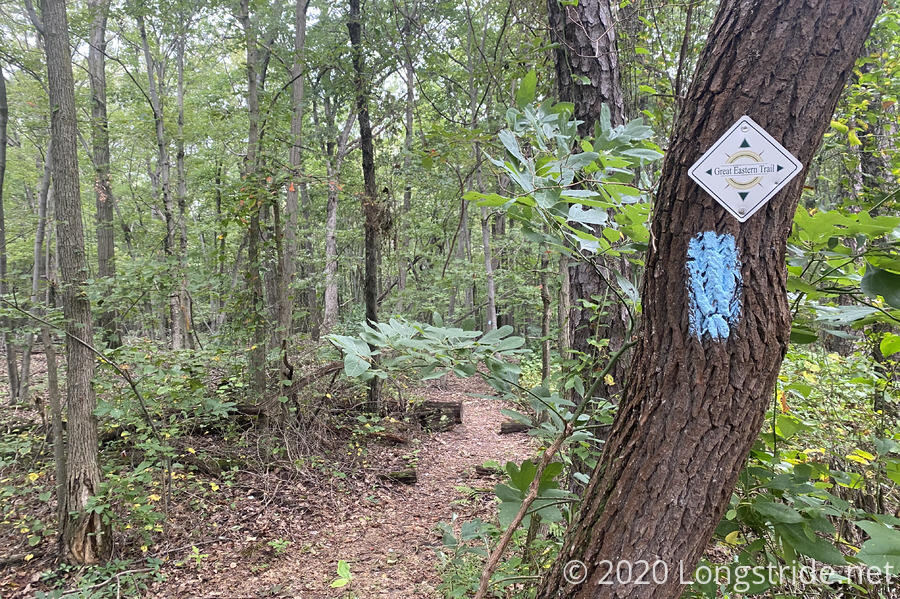 Trail — The Tuscarora and Great Eastern Trail share this stretch of trail, at Hampshire Grade Rd.

During the latter half of the day, the trail passed through the Sleep Creek Wildlife Management Area, mostly on dirt or gravel roads of much better repair than this morning’s roads. At the south end of the area, trees had once been clear-cut to make space for grouse habitat; it was a bit overgrown now. Further on were signs announcing a wild turkey brood rearing area.

While packing up from a break at a trail junction, I saw several red, black, and white caterpillars, busily munching away on plant leaves. 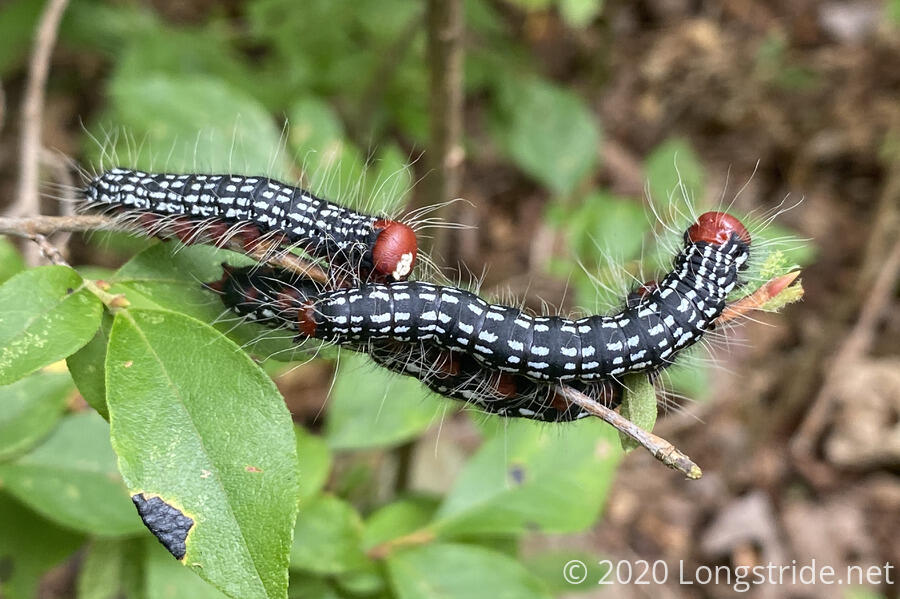 A bit after one, I arrived at the Myers Spring, a fast-flowing piped spring near a campground of the same name. A bit up the hill beyond the spring, a cross and small memorial area stood; presumably for Myers. The spring itself had a warning indicating that water was not fit for human consumption unless boiled. (Most likely a legal CYA due to this being the only water source most campers in the Sleepy Creek WMA would use. I’m sure it’ll be just fine filtered.)

I collected and filtered a bit more than five liters of water, since this would be my water for the (short) rest of the day, and for dinner, and tomorrow morning. I probably wound up with substantially more water than I needed, but the dry sections from earlier in the week left their mark.

This took over an hour; thanks to the poor quality water source at Shockeys Knob, my filter was clearly pretty gummed up with crud, and will need some cleaning once I get to Hancock.

Quite a few cars passed by during this time, and it dawned on me that it was a Friday, and that there might be many more coming, so I skipped climbing up the hill to check out the memorial, and instead, made haste down the road to make sure I got a decent campsite.

The “trail” continued on gravel roads, following a little above the eastern shore of Sleepy Creek Lake. Occasionally, there was a nice view of the lake. 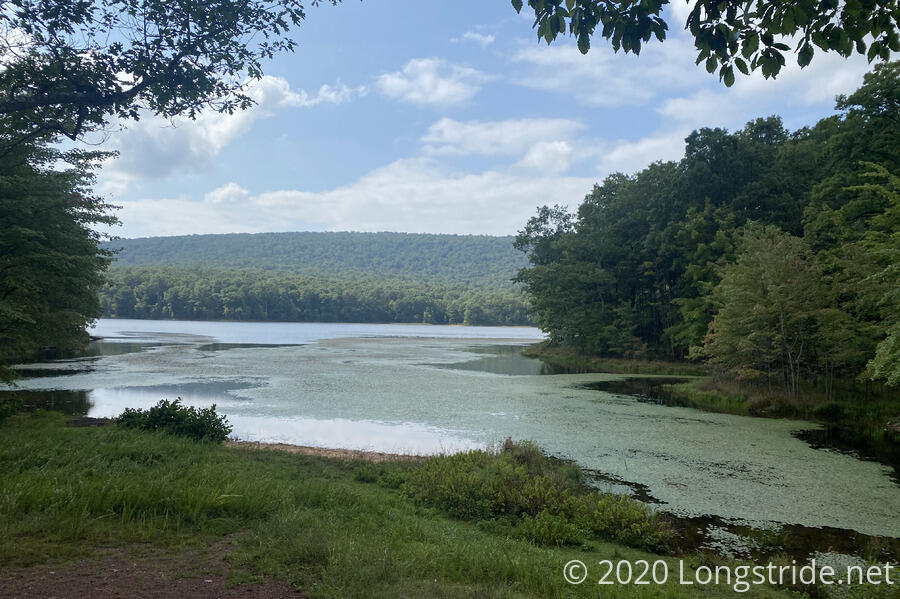 It turned out I probably didn’t need to rush; I got to the first campsite in Sleepy Creek’s Lower Campground, and it was a nearly perfect site. Aside from a “bear pole” that any grown bear would scoff at (though it would keep food away from most other animals), there was a privy, and, wonder of wonders, trash cans.

I think I saw two other cars the rest of the evening; the first was right after I got there, a couple needing directions on how to get to the spring.

With four hours until sunset, I was pretty lazy setting up my tent. But I did try and take advantage of what little sunlight there was to dry my clothes out. (The sun spent most of the late afternoon hiding behind clouds.)

The hike here tired me out more than I expected; probably I wound up carrying too much water the whole day (and didn’t drink enough of it). Once I got my tent set up, pretty much immediately, I wanted to take a nap; I forced myself to cook dinner instead.

Even with (or perhaps because) the sun was behind clouds, it was nice out, with the occasional breeze. It was a nice way to end the day.

As the sun set, the sky was clear, and the stars (what few of them I could see, what with trees in the way) were nice. Over the course of the evening, while I was still up, I took occasional trips outside my tent to look at the stars; I think I saw a couple of meteors (or perhaps satellites) fly by.

The other notable thing for today was there was no cell service for most of the day. While I’ve actually been rather more disciplined than usual this hike in avoiding wasting time at breaks on the internet, it was nice to not have to worry about that temptation for once.

Tomorrow: set-up for going into Hancock on Sunday. 6 am alarm to leave early, and depending on trail conditions (and how I feel), I’ll go either 10 miles to the next shelter, or 15 to the one after.