Today’s ten-mile hike brought me into Maryland for my first (and only) planned zero of the trail.

In contrast to yesterday’s grey skies, today started off with plenty of sunshine, which set a much better mood for heading into Hancock.

The trail continued down the hill, crossing the creek I got water from yesterday a little bit upstream. Then, it turned west, sandwiched between the creek and a small state road for a little while before crossing the road and heading up the first of two substantial (but short) uphills for the day.

After cresting the hill, the trail followed another road, which went through farmland and a few large houses on large properties. At some point along the road, I passed 200 miles on the hike. 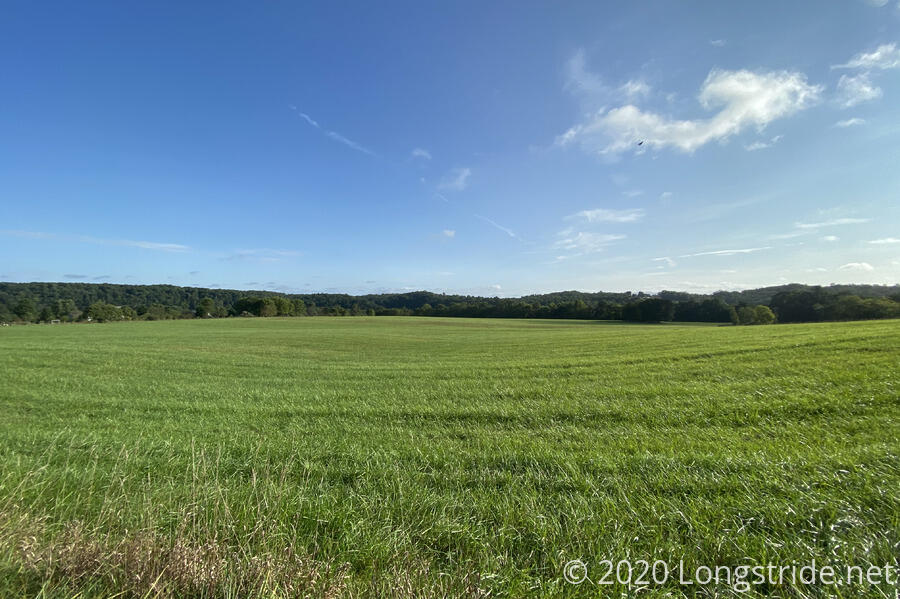 Heading downhill, the road/trail wound its way besides a few more large houses. A smaller house, on the edge of a private community, had a “Private Property. Beware of Dog.” sign. Instead of a dog, though, there were five cats in the yard, most looking bored, and one eying me suspiciously.

I crossed a bridge over a creek, though the entrance to the bridge was somewhat ominous. There were signs warning of venomous snakes in the area, and how also no entry was permitted onto the state land. The road was barricaded (from cars) on both sides of the wooden bridge, but since the Tuscarora went over the bridge, I assumed the signs did not apply to hikers. (Well, the one about snakes probably still did, but I wasn’t going to go looking for any.) 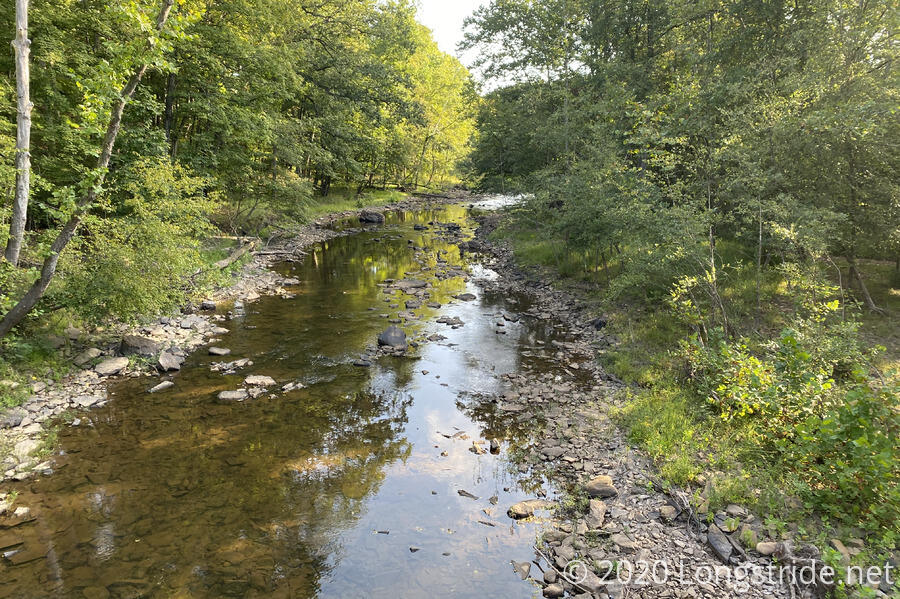 The road wound its way up the hill on the other side of the creek, eventually diverging from the road and making a short steep jaunt up a hill.

On its way down the back side of the hill, the trail joined a dirt road, wandering through more land clearly used for hunting. (I missed a blaze where the trail turned off the road, and followed the road until it reached a large camo hunting blind, when I realized my mistake.)

After crossing a field and rejoining another dirt road, the trail became a trail again, heading downhill and becoming moss-lined for awhile. 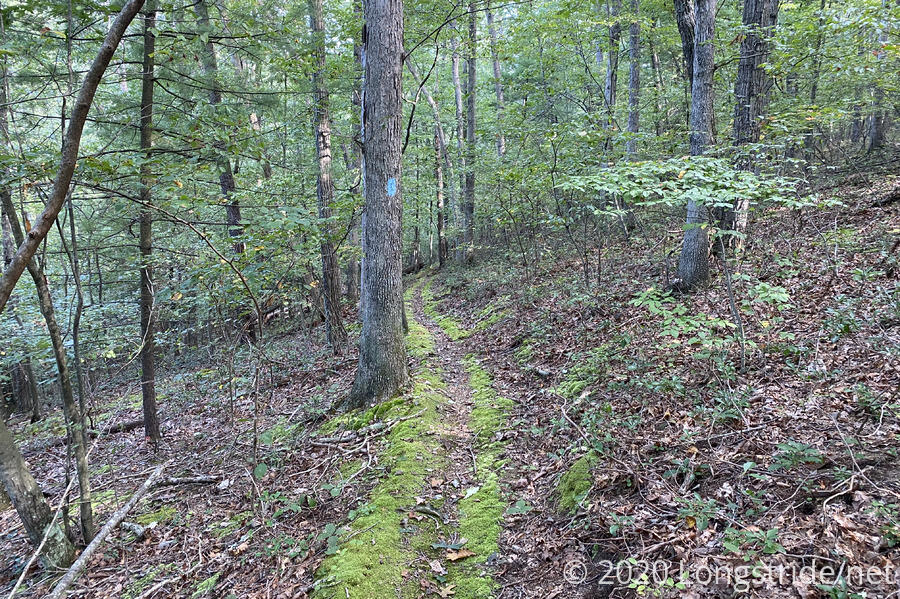 Around ten, I reached the Dugan Hollow Shelter. A small, cozy shelter, it’s not much to write about, but it would have served me well had I decided to push the extra distance last night. (I’m glad I didn’t, though.)

With the sun still shining brightly, I took the opportunity to attempt to dry out my clothes. It worked, a little, but it was better than nothing.

I had a 3 pm checkin time, so I relaxed at the shelter for over an hour. Not wanting to have to kill time at the shelter longer than necessary, after the motel’s office opened, I inquired about early checkin. They said they could have my room ready by noon; I said I probably wouldn’t get there until 1 at the earliest. But that being accomplished, I quickly packed up and headed out.

The trail continued downhill for another twenty minutes, before it reached River Road, which paralleled a set of train tracks and the Potomac River (which was not visible from the road).

With relatively little traffic (that gradually increased as I proceeded down the road) and a reasonably wide shoulder, I was able to make excellent time down the road, averaging well over three miles per hour.

As I continued, the once-sunny skies began to cloud up, and as I reached US-522 (which the trail crossed further south a few days ago), the occasional raindrop fell.

After waiting for a suitable gap in traffic (which was much higher now that I’d reached an intersection), I was able to cross the road and make my way to the pedestrian bridge attached to US-522 as it crossed both the Potomac River and the C&O Canal and its towpath. 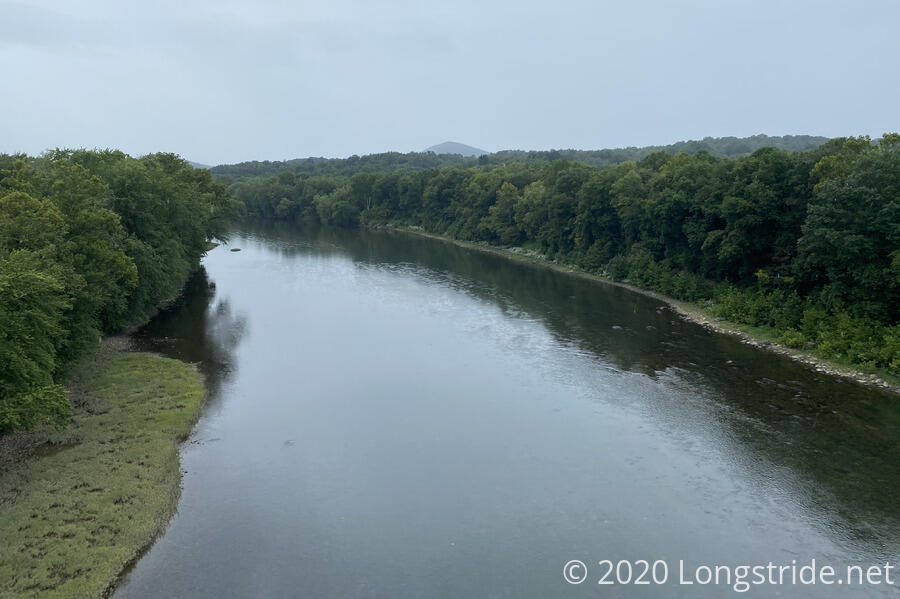 Crossing the bridge brought me into Maryland for the first time this hike, and to the Hancock Motel, my destination. The occasional raindrops turned into a light rain just as I made it to the motel’s parking lot, and I was glad I called ahead for early check-in; otherwise I would have gotten rained on while hiking.

Checkin was painless, and the first orders of business were a shower and a nap.

Apparently, there was no pizza delivery here, so for dinner, I had to make the arduous five minute trek down the road to the nearby Pizza Hut. (Next-door to the Pizza Hut is a Dollar General, for tomorrow’s resupply. And the trail itself follows that route, continuing further down the street before turning onto the C&O Canal Towpath. But that’s for the day after tomorrow.)

My motel room was very conveniently located next to the motel’s washer and dryer, so I took care of that this evening as well. Yay, clean clothes!

While I’m now finished with West Virginia on the Tuscarora, I still have one tiny little section of the state to do this hike: my loop starts at the western end of Harpers Ferry, so I’ll have about a mile left of hiking in that state. Until that last day, though, I’ll be in Maryland and Pennsylvania.

Tomorrow: no alarm, but lots of chores, so I can’t slack off too much.