An easy, lazy day brought me past the halfway point on the Tuscarora Trail.

I woke up about half an hour before sunrise to cloudy skies. It was still relatively warm, and I quickly got my food bags off the bear pole and started packing up to leave, beginning today’s hike a bit before 8.

With today’s plan for another ten miles to Spruce Pine Hollow Shelter, I didn’t have to start so early, but, I’d rather spend more time hanging around a shelter than a campsite, and starting earlier would give me the option to go 15 miles to the shelter after, making for a very easy day into Hancock tomorrow.

The trail today started off going down an old road, and it was occasionally a bit confusing to follow the trail. In general, the blazes for the first couple of miles were either a little sparse, obscured by tree and plant growth, or confused by the presence of other, unrelated blazes. (In particular, the Tuscarora’s light blue blaze competed with a darker blue blaze that I think was a property boundary marker, and smaller red blazes that I think were a different boundary marker, even though they both appeared at the same time (and occasionally on the same trees).

The only time it was really a problem was when there was a trail or road junction, and missing a blaze could easily send you in the wrong direction — and you couldn’t just follow the dark blue or red blazes because they didn’t always align with the Tuscarora.

There was also a power line “clearing” that was so overgrown that the blaze on the far side was barely visible, and the one on a pole in the middle of the clearing was completely covered by the overgrowth.

That said, I greatly appreciate that the PATC crew that blazes trees takes the time to create mostly uniform blazes. Some of the other blazes this morning looked like a madman ran through the forest with a can of spray paint tagging everything within reach.

The only “hard” portion of the day was when the trail climbed up towards a rocky ridge, which was a little steep, though the primary obstacle there was the trail for a short while paralleled a road, and the blazing was a bit inconsistent, so I kept winding back up on the road when the trail actually climbed further up the mountain. Otherwise, the day was mostly downhill, on relatively easy surface and I made pretty good time throughout the day.

The trail followed or paralleled Dug Road, an old road used for coal mining, a good portion of the morning. The trail used the road where feasible, veering off when Dug Road became impassible.

Just under five miles in, I took a break a little off-trail at a sign for Dug Road (advertising a closure a quarter mile ahead). While I was there, I reserved a motel room for tomorrow and Monday in Hancock.

While I was doing that, a group of thirty day-hikers hiked by on the Tuscarora. I’m not sure that any of them saw me, though I was probably a good 150 feet off-trail and sitting down when they went past.

As I was sitting there, it grew colder, and a light sprinkle of rain got me to put my pack cover on and resume hiking more quickly than I otherwise might have.

The cooler air was refreshing, and I was able to hike faster without getting too hot. 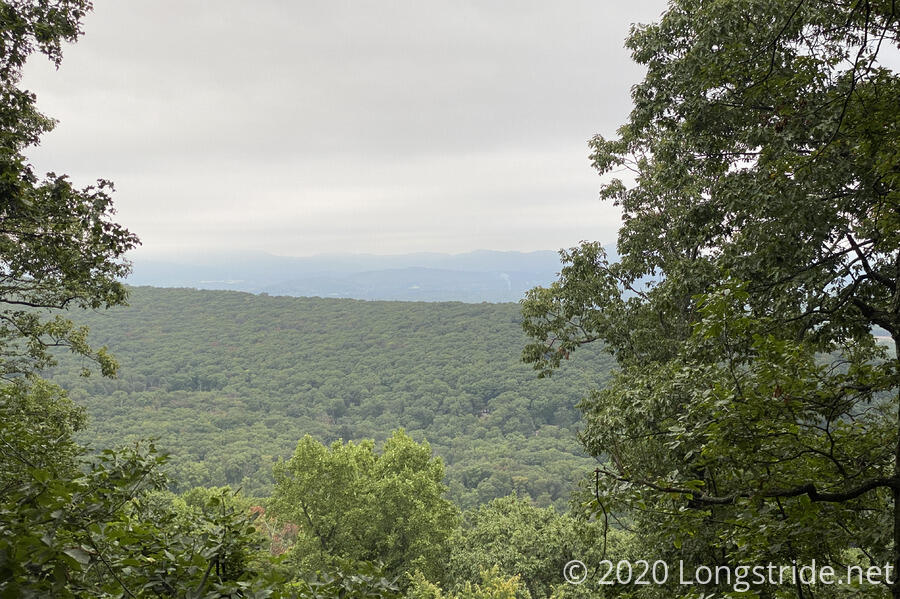 I also passed an unexpected milestone: the halfway point on the Tuscarora Trail! (If I’d bothered to do the math, I’d have known I was reaching this milestone, but since I didn’t start at the Tuscarora’s terminus, and the first and second legs of the AT part of the loop aren’t the same length, I hadn’t really thought about those milestones at all.) 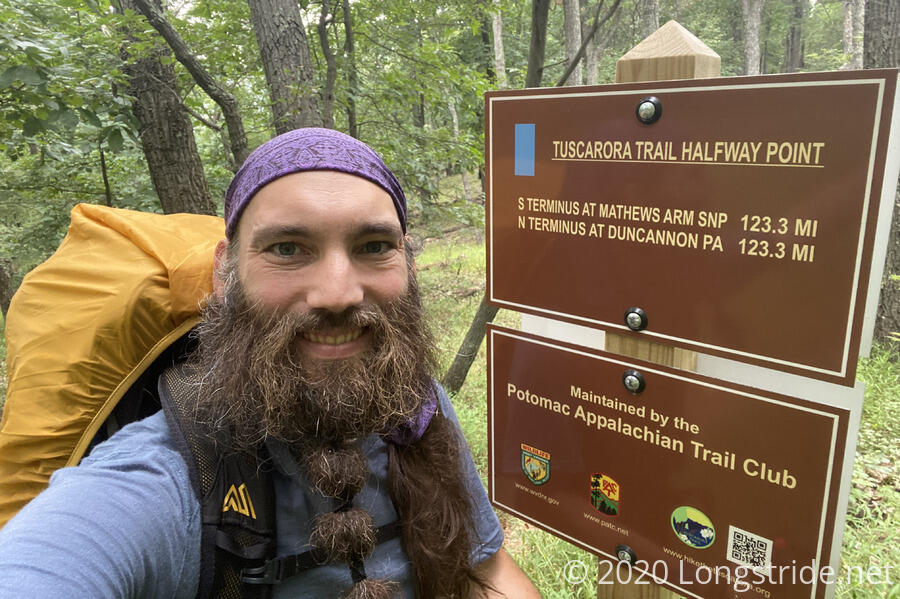 Halfway on the Tuscarora!

I let the brief distraction and wave of euphoria at behind halfway done the hike’s primary goal carry me up the trail, perhaps a bit too literally: I wound up slightly off-trail, hiking up along side-trail to a neighborhood. A rather large fallen tree had obscured the trail, and the next set of blazes, and I didn’t notice, because there was a perfectly good trail to follow. Fortunately, gps-enabled maps came to the rescue (as they have all other times I’ve been slightly off-trail), and I was back on the right path quickly enough.

As I continued, I passed by a few small groups of day-hikers, and one pair of hikers that were on their way to Sleepy Creek for camping. Most of the day-hikers were out to see the “Devils Nose”, a rock formation with now semi-obstructed views due to tree growth.

The trail continued on, and after a very steep downhill (which was, quite possibly, the steepest portion of the trail I’ve encountered so far), I reached a dirt road, which I followed most of the way to the shelter.

Along the way, there were an extensive quantity of private property signs; one particular landowner seemingly went overboard with their signage to the point that it was gaudy. 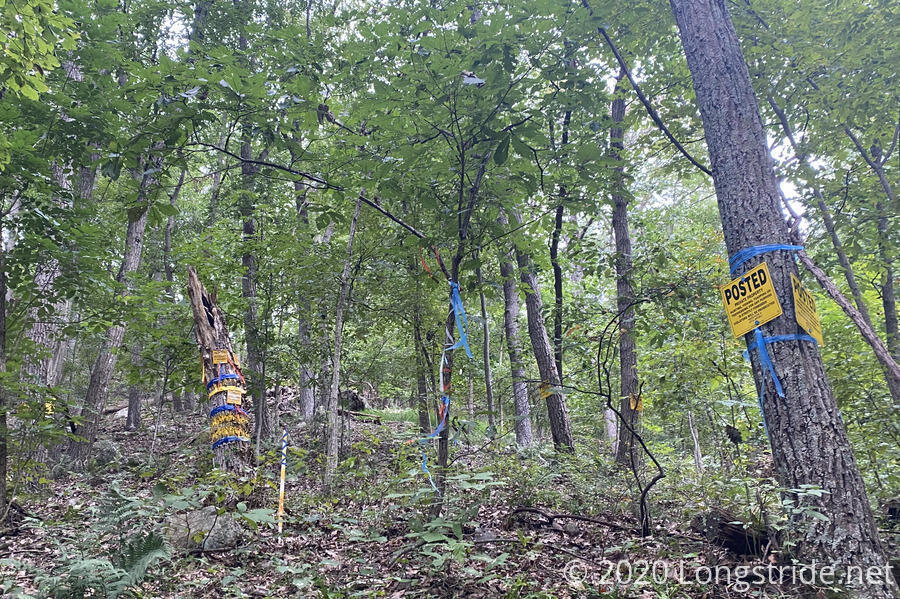 Private Property! — Someone is really concerned about marking their private property.

Leaving the dirt road, the last bit of trail leading to the shelter ran fairly close to homes; it felt like the shelter was practically ins someone’s backyard. It wasn’t really that close; I’d estimate at least a quarter of a mile away, but you could easily see the homes from the trail, and light from them from the shelter in the evening.

I reached Spruce Pine Hollow Shelter around 1:20, to still-overcast skies. It was a nice, solidly built shelter, with integrated tables and benches, as well as a large picnic table. Continuing with the trend, the shelter’s privy was the “Last Chance”. (“For Gas”, it said, inside.)

I collected water from the nearby creek for dinner, and then wound up putting my fleece on to stay warm; there’d been no sun all day, and it was actually a little bit chilly out. 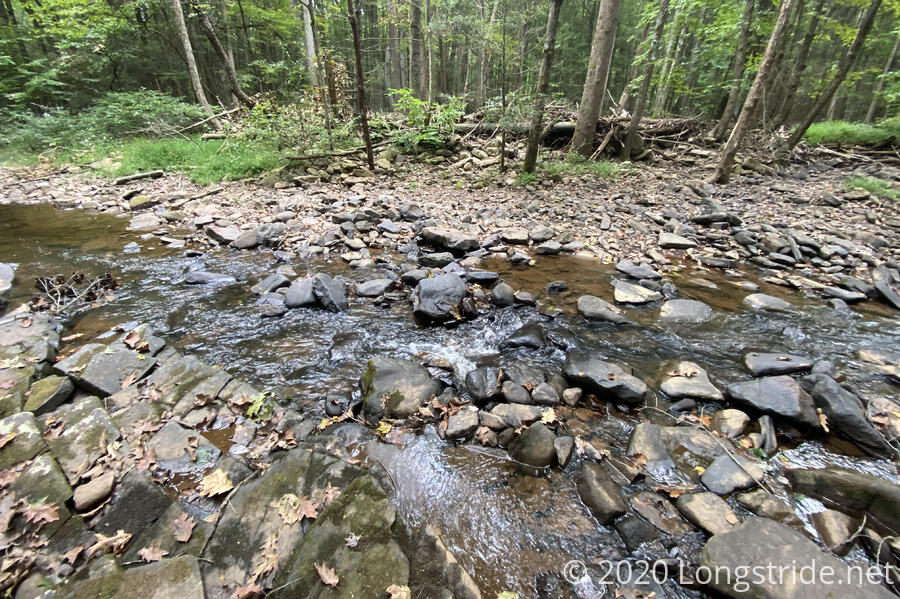 Aside from water and dinner, I mostly relaxed this afternoon. I still felt a little tired, but not nearly as much as when I got to Sleepy Creek yesterday.

About a half hour after sunset, I heard fireworks. I guess someone needed a tiny little celebration.

I’m setting no alarm for tomorrow. With only another ten miles to town, and a motel room waiting with a 3 pm checking, I can sleep in for once.