A long day today got me through Maryland and into Pennsylvania, the northernmost state on the Tuscarora Trail.

I may have set a 5:30 am alarm, but that doesn’t mean I got up at 5:30. Actually, I got up sometime after six. It was actually kind of cold out, so getting out of my sleeping bag was quite difficult. The long day planned eventually forced me to get moving, though. Having my food in my tent rather then on a bear line made it easier, though. (I know, bad hiker. But I didn’t think it likely there’d be bears rummaging around the towpath.)

It was foggy when I set out, west along the towpath six tenths of a mile to where the Tuscarora departs. From there, nearly the entire rest of Maryland was a roadwalk of some sort. After turning off the towpath, the trail joined some kind of service road, and then turned onto US-40 briefly, before turning onto Pectonville Road. 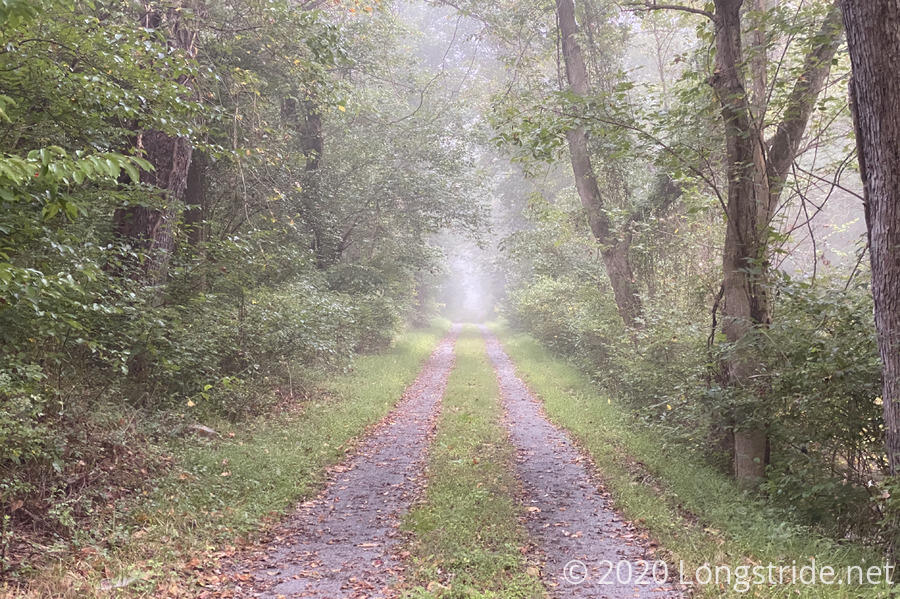 My first stop was at the Camp Harding County Park after just a few miles. I made use of the restroom and got some water. (I could have carried extra water from the campsite, but why carry extra weight if you don’t have to?) 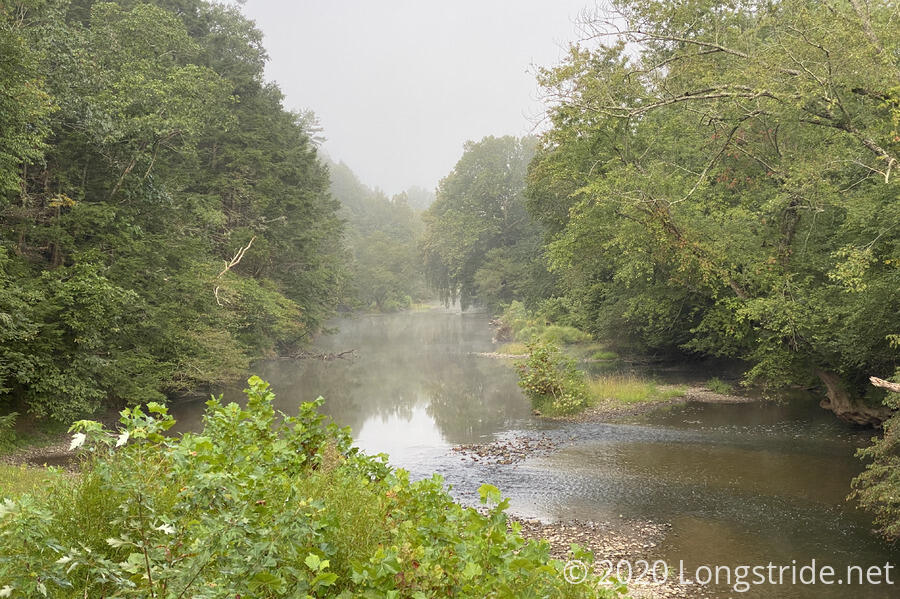 Pectonville Rd dead-ended into the gravel one-lane Kuhns Ridge Road, which took me into the Indian Springs Wildlife Management Area. As I traveled along the road, I decided that I probably could have camped at one of the several parking areas, which could have made yesterday a little less short and today a little less long. It certainly would have made the latter part of today less frustrating since I wouldn’t have been under time pressure.

I took a break at one of those parking areas, and then continued on, turning off Kuhns Ridge Road for another gravel road when it ended. That brought me to the Maryland-Pennsylvania border. Three Tuscarora states down, one to go! 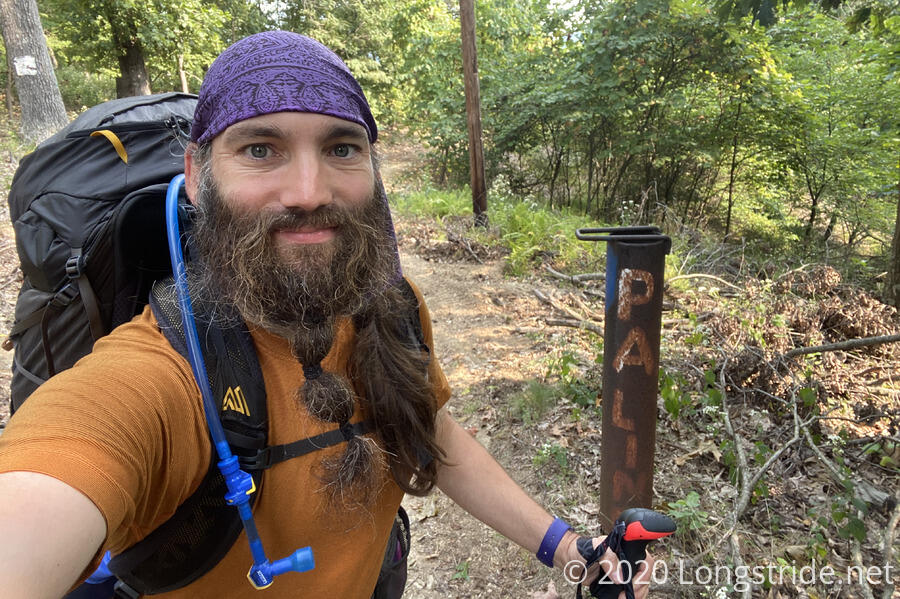 The Pennsylvania Border — Three states down, one to go for the Tuscarora!

The trail was a trail briefly, then rejoined paved roads after crossing a creek. At least now, there was some scenery, as I traveled through hilly farmland.

A series of paved and gravel roads brought me to PA’s State Game Lands #124. The unfortunate thing about the SGLs is that no camping is allowed. Not that there would have been anywhere to camp.

After entering the woods via gravel road, the trail again became a trail, and began a steep climb up the mountain. I took another break just after the end of the steep climb, and shortly before reaching the mountain’s ridge. There was a nice little breeze blowing; I hoped it would continue through the afternoon.

The trail continued well enough, but after the final climb up to the ridge, it turned into a rocky, overgrown mess.

Now, that it was rocky wasn’t really that big of a problem. Sure, it was annoying, and slower going, but that’s par for the course in the Appalachians.

But it was overgrown also, which was the real problem.

Overgrown trail is usually only irritating (unless it’s also wet, in which case it’s infuriating), but when combined with rocky trail, you wind up moving considerably slower, since you can’t see where it’s safe to step without significantly more care (and probing with trekking poles).

In combination with that, the blazing was often old, hidden (by other overgrowth), or inadequate (for the overgrown quality of the trail). I wound up off-trail several times because following “the trail” led me astray, since it was quite easy for not-the-trail to look as good (or better than) the trail itself. Fortunately, I had gps-enabled maps, so when it became clear I was off-trail, I could usually find my way back. (It helped that it was a ridge walk, and the ridge was pretty narrow, so unless the not-trail took me to the wrong side of the ridge (which it did, on occasion), it wasn’t that hard to find the trail again.

All together, this caused my speed to drop quite considerably. On normal trail (not roads) I can usually manage 22 - 25 minutes per mile, and difficult trail might drop that to 30 - 35 min/mile.

Here, I was going 40 - 45 minutes/mile. I became worried I wouldn’t make it to the shelter before sunset. 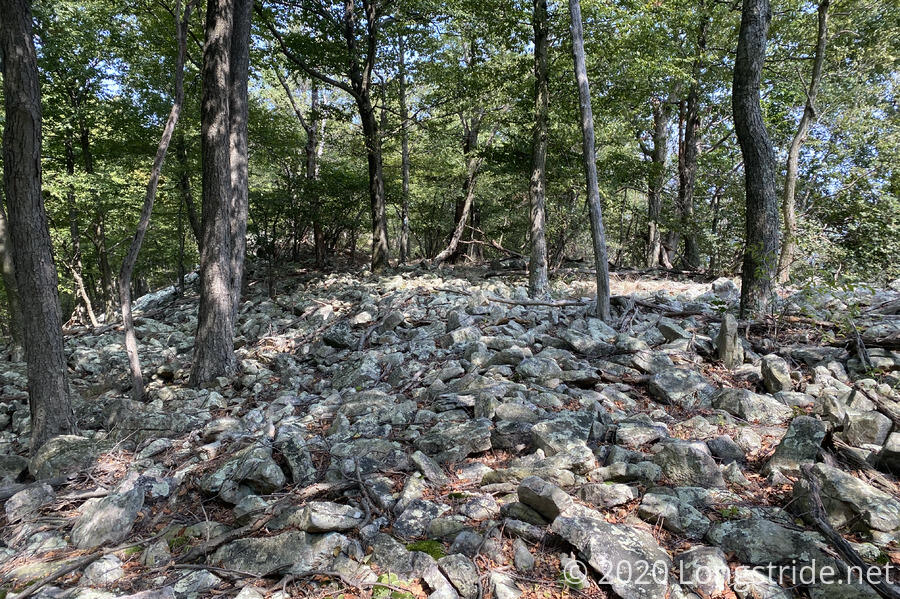 Rocky Trail — This would have been an improvement over much of what I had to hike on.

Then, one of my trekking poles broke.

When maneuvering between rocks on the trail, I occasionally become unbalanced due to awkward footing, and “fall” over. I use the term fall loosely; it’s more a controlled (but forced) laying-down on a rock to my side with my feet still planted (probably also wedged) in place. The only real risk of injury is if I manage to do something super-awkward with my legs in the process. It’s a move I’ve done many times before, to no ill effect.

This time, I didn’t get my pole out of the way fast enough, and it snapped in half. Bummer. Especially in a very rocky overgrown section where I needed it the most.

Now I was pretty sure I wasn’t going to make it to the shelter before sunset.

I collapsed my broken pole as much as I could, stuffed it in a pocket on the outside of my pack, and continued on with just one pole.

At least there was the (very) occasional view. 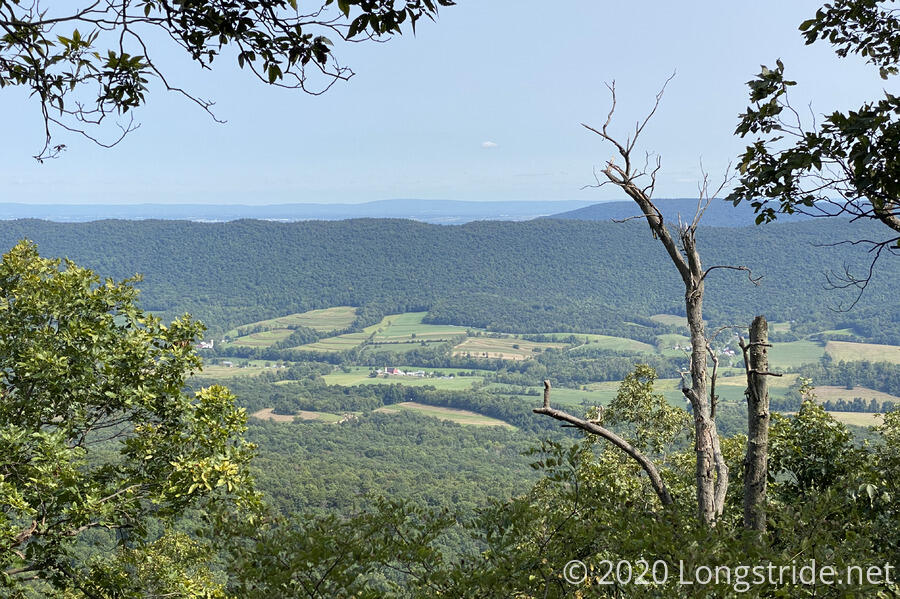 When I stopped for my third break, I’d gone just five miles in three hours.

After a while, the trail got a little less bad, mostly as it started to descend from the ridge.

Reese Hollow Shelter was nicely built, with a small porch and picnic table. Someone was nice enough to leave a Citronella candle on the picnic table, which provided a little light while I was eating. The shelter’s piped spring was also flowing quite well, and this was some of the easiest water I’ve ever gotten on-trail.

As I was unpacking for dinner, I found that my broken pole was missing; it must not have been secured well, and fell out at some point when I tripped on the overgrowth. I suppose it’s good not to have to carry it, but I’d have rather tried to get the broken section replaced, or otherwise tried to cannibalize it for parts (maybe make a frankenpole with another pole that has a bent section), to say nothing of not wanting to leave trash on the trail.

Including the side-trail to the shelter and this morning’s walk back to the trail from the campsite, today was 21.4 miles, which I’m quite surprised I was able to do. Only the fact that most of the day was roadwalk was what allowed it to work.

Tomorrow is another long day, 18.1 miles to Burd Run Shelter (plus a mile back uphill from Reese Hollow), so I set a 6 am alarm. Hopefully tomorrow’s trail will be better maintained than today’s was!