A short day today got me to where I planned to be yesterday.

With a short day planned to Fowlers Hollow, I wasn’t very motivated to get out of my tent and get moving, especially since it was kind of cold out. Happily, though, my tent was completely dry, thanks to the wind blowing over the ridge all night.

I also found three walking sticks on my tent. Two were in obvious view, between the tent body and rainfly; the third was hidden from the inside of the tent, but easily visible outside when I was tearing it down.

Not ten minutes after I left my campsite, I ran into my first person of the day, a PATC trail maintainer, who had just arrived to start mowing a portion of the trail. We chatted for a short while, before we both got back to our “jobs”.

The day mostly continued in a straight line along the rocky ridge of Knob Mountain, entering the Tuscarora State Forest. The first view of the day was to the south, of a beautiful valley.

Progress early in the day was slow, with the rocks and some overgrowth (though not as bad as it had been on prior days). As I made progress down the mountain, though, the trail became much nicer to hike. Early in the afternoon, I passed by one of a very few campsites I’ve seen in Pennsylvania, actually a designed campsite by the state forest! It’s a wonder it wasn’t listed in the guidebook. 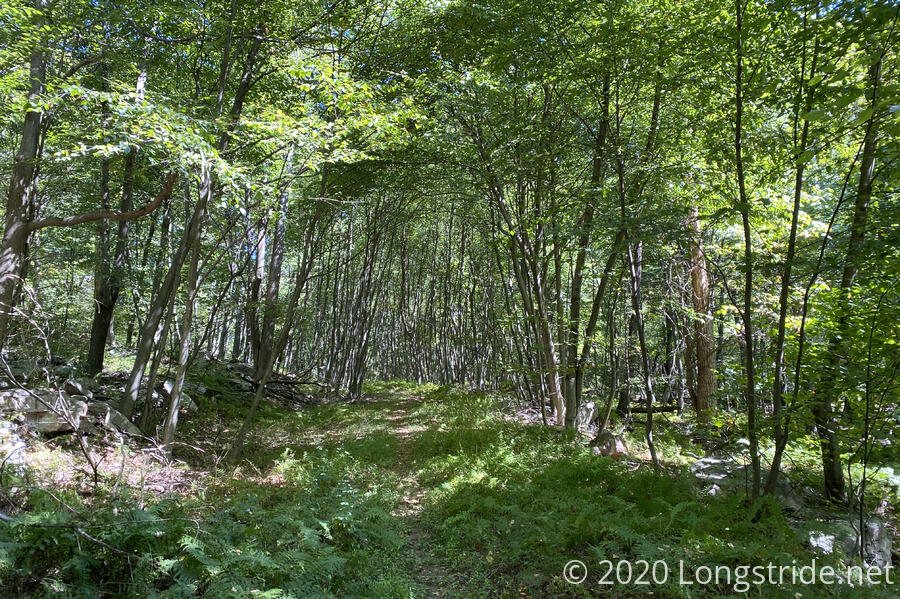 Forest Trail — Why can’t the trail always be like this?

The trail became a grassed-over gravel road that I followed to its intersection with the gravel Hemlock Road, which entered The Hemlocks Natural Area. The trail itself did not go into the area, instead just skirting the edge along the road and paralleling the road for a bit as it went away from the area. I stopped for a break there. Durinh my break, a group of motorcycles went by into The Hemlocks, and two trucks went back up the gravel road the trail had been following.

Last year, a windstorm blew down a significant number of very large trees in the Tuscarora State Forest. As the trail proceeded deeper into the forest, it entered that area, and there were several short (and well-cleared) detours around these trees. I missed one of these detours, and wound up “on trail”, but going through unmaintained (because the trail detoured) knee-high grass and large trees. Rather than turn back and figure out where I should have gone, I pushed through, using brute force and my gps to determine where I was “supposed” to go, like I had through so many prior poorly-maintained sections. This brought me to a huge tree that was too large and too high off the ground for me to climb over, but low enough to the ground that I couldn’t crawl under it with my pack on. Fortunately, having experienced the AT’s Mahoosuc Notch, I was well-prepared: I took off my pack, crawled under, and pulled my pack through. No problem!

Shortly after, I made it to the Fowlers Hollow Shelter. It is the first shelter I’ve encountered that did not have a wooden floor; rather, a bed of straw covered a dirt “floor” in the shelter. As I further inspected the shelter area, I saw what I’d initially missed: the shelter itself had nearly been flattened by two large fallen trees! One of them was rooted at the back corner of the shelter (and I think may have clipped the other back corner on its way down); the other fell a just outside the shelter’s large external fireplace. 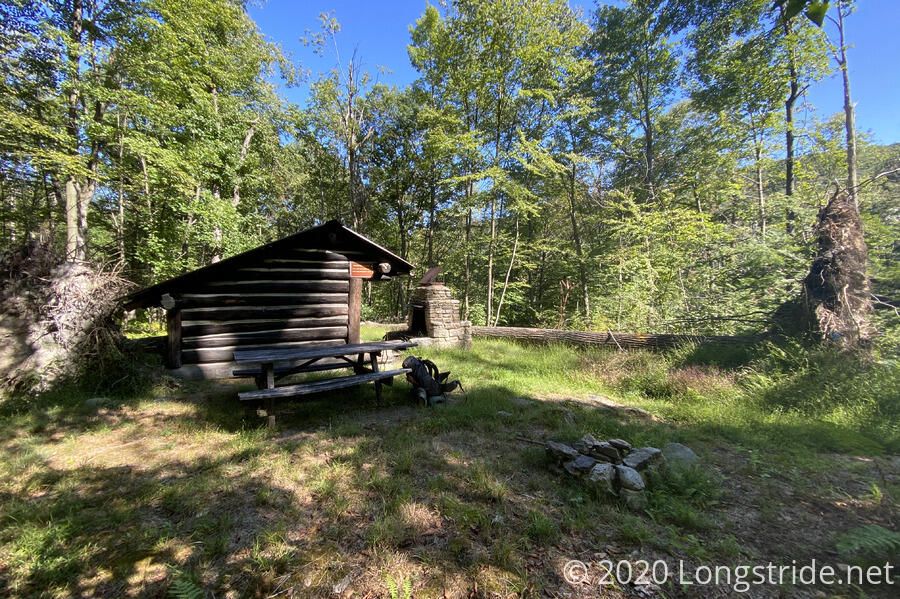 The shelter itself was well-stocked with cooking implements (including pots and pans and a ladle, among others). I was a bit surprised to find no shelter logbook.

Just before the shelter was a nice spring, with a pool of water protected by sandbags. I used the ladle from the shelter to scoop water into my bag.

I had an early dinner (around 3 pm), as I tried to decide what to do with the rest of the day.

I had been told of a campsite across a creek about four miles ahead. That was an option, but would require (at best) at least another two hours of hiking; possibly more if trail conditions weren’t great. If I hiked there today, I’d probably get there very close to sunset, but that wouldn’t be so much a problem since I’d had dinner early.

The guidebook also made mention of a campsite a quarter-mile ahead on the trail, on the other side of Fowlers Hollow Run, so I decided to check it out, just in case. It was nice. In a rare decision, I found I preferred the campsite to the shelter. (Lack of flooring was the primary reason, but I was slightly uneased by the fact that the shelter was nearly flattened, as well as some unidentifiable food residue on one of the shelter’s front logs.)

I returned to the shelter’s picnic table and relaxed there for another hour or so, then relocated to the campsite and set up my tent. 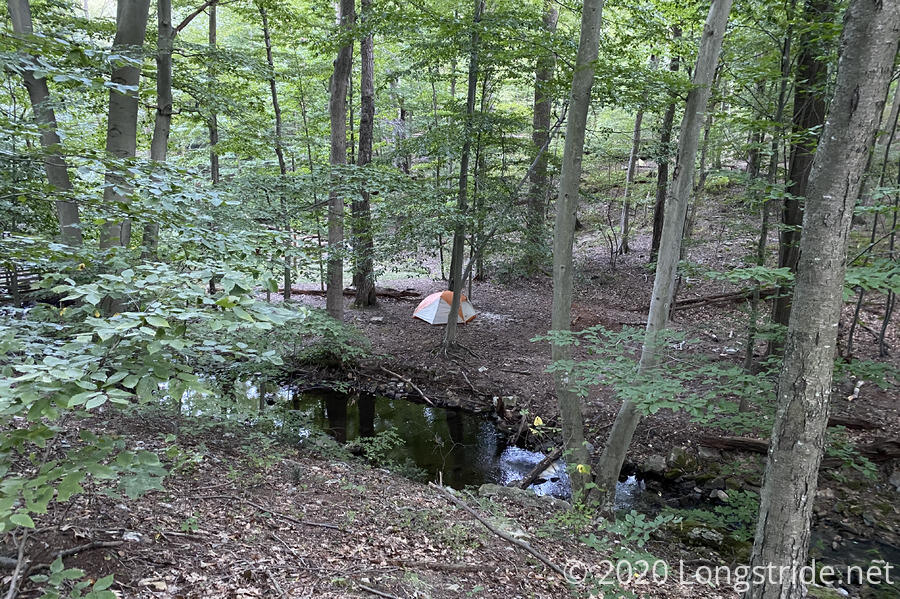 The only downside to the campsite was that it was cool and a bit humid, since it was located next to a stream. I resigned myself to having a wet tent to deal with tomorrow. That said, it felt a more calm and serene place than the shelter did, and calm and serene is in short supply these days.