It was pretty cold when I got up, but somehow, my tent remained completely dry, except for a bit of condensation on ground tarp. Being next to a creek, and it still being humid, I’d expected to put away a wet tent today, so this was a pleasant surprise to start the day with. I was happy to take it, though, because given the cold last night, I didn’t sleep that well.

The day started off with a steep thousand foot climb over a mile from Fowlers Hollow Run to the ridge top. The trail followed the ridge for a short distance, then steeply dropped into another valley to cross Shaeffer Run.

Climbing out of that valley, the trail briefly followed a dirt road along the top of the next ridge, then dropped down into the next valley and climbed back up again, giving me three steep climbs (and two mostly rocky descents) in the first two hours of hiking.

The third ridge brought me past the site of the former Sherman’s Mountain Fire Tower. I didn’t look around too hard, so I didn’t see any evidence of or apart from the sign indicating it used to be there. It would have been nice to have gotten a view from above the trees, though.

The trail joined a dirt road somewhat overgrown with ferns. There was sufficient traffic on the road, though. To keep a path clear. 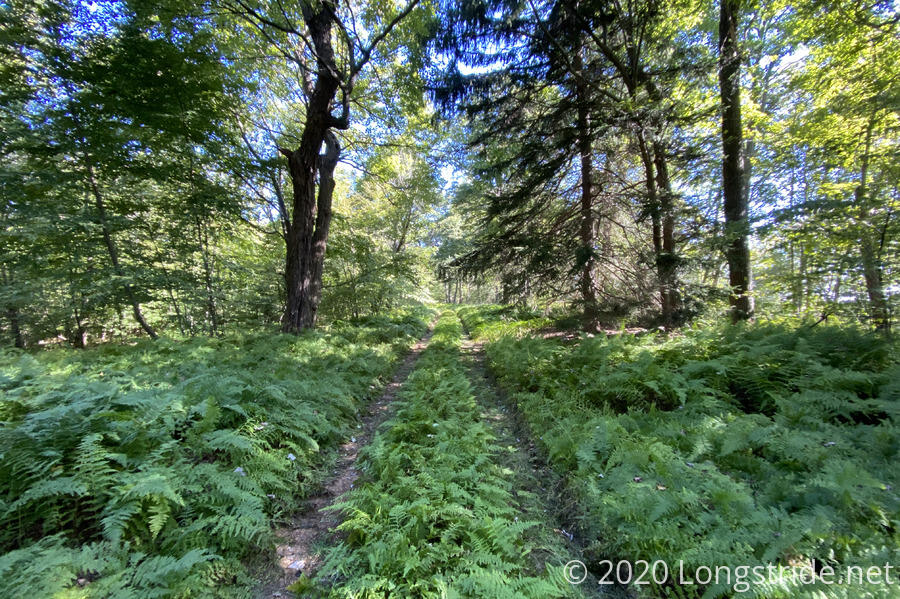 About two and a half hours after I left, I reached Laurel Run, and the campsite I was considering yesterday. I decided that while I certainly could have made it there yesterday if I wanted to, I wouldn’t have enjoyed doing it (the hills late in the day would have been very tiring). All it would have done was make today easier, and today wasn’t so hard as to really require it, especially since there wouldn’t have been any benefit to going further — where I’m stopping the next couple of days is fixed.

That’s what I thought before I stopped for a break, anyway. I’d reserved a room at the Red Cardinal B&B in Boiling Springs for Tuesday the 22nd, but now that I was a day behind schedule, I needed to push the reservation back a day as well. I was just about to contact them to see if that were possible, they texted me to reconfirm the reservation!

I asked if they could delay my stay for a day (since Wednesday was also available when I’d made the reservation), but unfortunately, due to a death in the family, Tuesday was the only day that worked.

However, we were able to reach a compromise. Normally, they pick hikers up from the ATC’s office in Boiling Springs, but they were willing to pick me up further north on the trail. So instead of staying at Darlington Shelter in two nights, I’ll hike four miles south to a trailhead. This would make that day a bit longer, but it should be an easy four miles. (Actually, my recollection was of a long steep uphill, but I was also hot and tired that day; this time I’d be going downhill, with the added motivation of a B&B.)

Compared to prior days, the trail was a relative joy to hike today. What little was overgrown was either short stretches, or not a hinderance. Occasionally, the trail was a little hard to follow due to downed trees, but not frequently.

One curiosity was a blaze apparently painted on a tree a foot off the ground. Then I noticed that it was because the tree had actually broken off its base and fell more-or-less straight down to the ground. 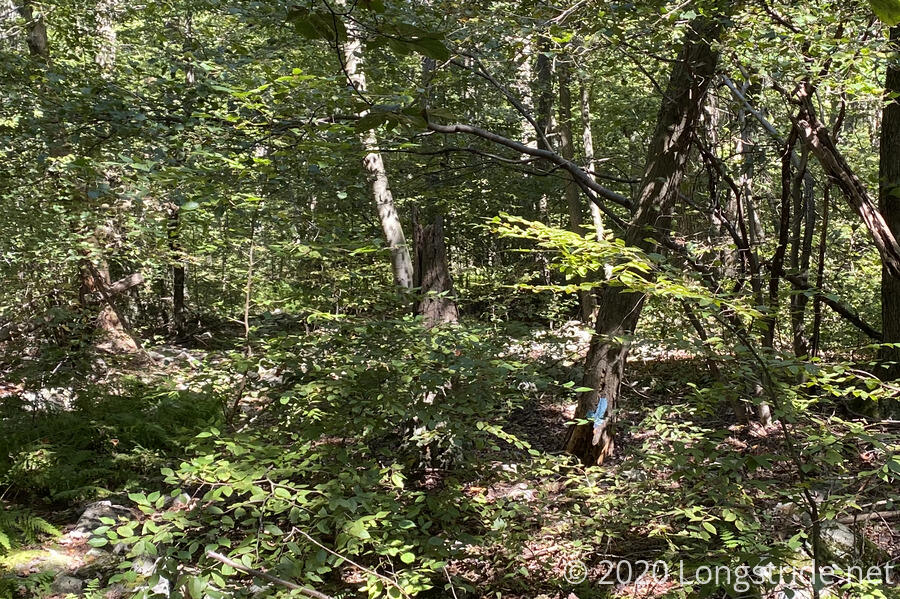 Low Blaze — I was wondering why someone painted a blaze so low to the ground. Then I realized it’s because the top half of the tree fell off.

The trail got rockier as I progressed, but without being overgrown, it wasn’t awful to hike. At a clearing for gas lines, though, due to overgrowth, I lost sight of the trail while distracted by the view, and wound up wandering through the forest (aided by property boundary markers and GPS) for several minutes before finding the trail again. 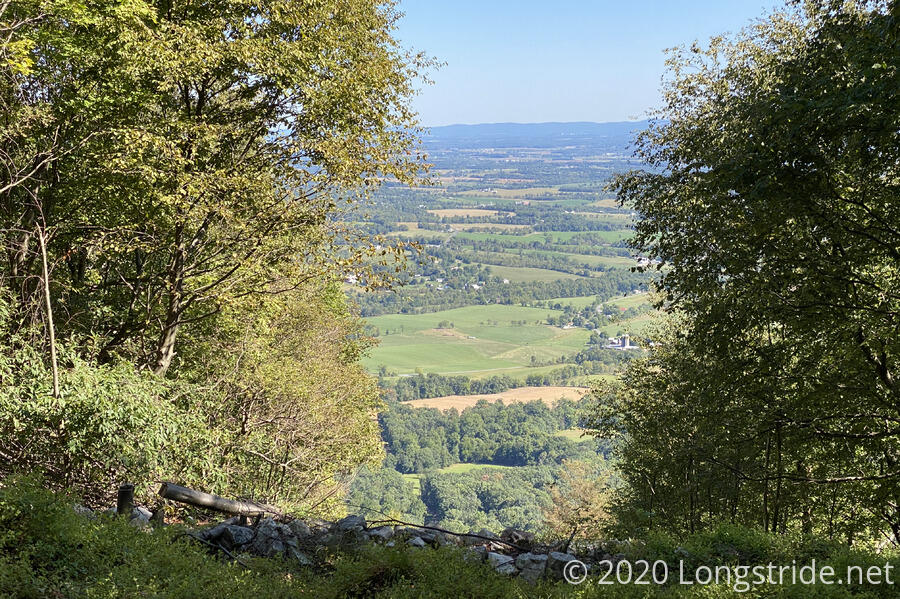 The trail generally followed the ridge for a while, but then it started repeated dropping away from and climbing back up to the ridge, which was kind of annoying.

After finally crossing over the ridge, the trail dropped (quite steeply) down towards Colonel Denning State Park. Along the way, there was a stone bench at a view out towards the Cumberland Valley. 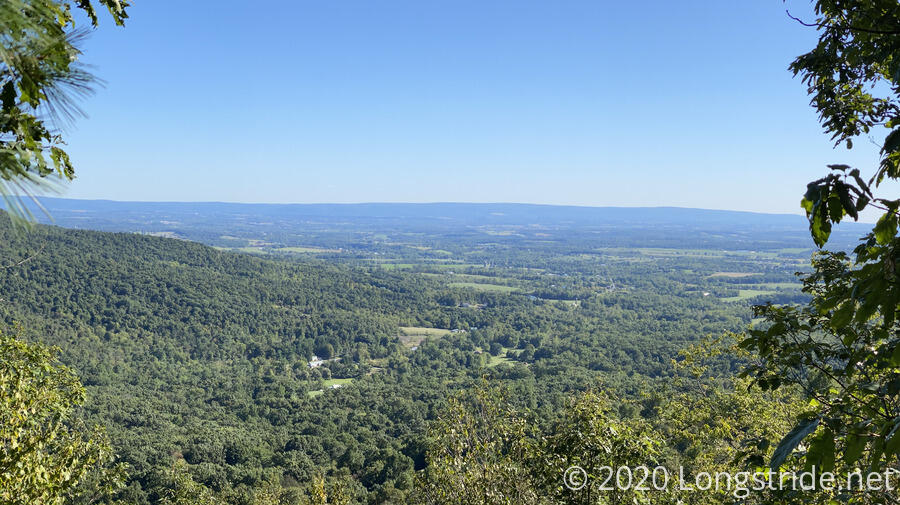 The trail followed gravel roads through hunting grounds down to a relatively busy state highway, then crossed it and climbed up the other side of the gap on old dirt roads, climbing most of the way up the ridge to the Wagon Wheel Shelter. Located just past the Wagon Wheel Junction (where trails go off in six directions), the shelter was clearly well-used by day hikers. Its privy, which I passed on the way to the shelter, was one of the foulest-smelling privies I’ve ever been to. It was so bad that two hikers I’d passed just after the junction, after inquiring if I were going to the shelter, said “it’s right around the corner, just follow your nose!”.

I guessed that the foul-smelling privy explained why someone had pooped behind a tree fairly nearby the shelter. That really added to the ambiance.

I made a water run to Wildcat Run, a quarter-mile down the trail, and then started on dinner.

While I was at the shelter, now after 6 pm on a Sunday evening (and continuing on until nearly sunset), I noticed quite a few people either heading further north, or returning. I knew there was a view a little more than half a mile further north; I figured that it had to be pretty amazing if people (families, even) were going to be out this late in the day going there or coming back.

The shelter was extensively tagged by (I presume) local day hikers. One family was extremely prolific, with two sisters and “Dad” tagging the shelter six times in 2020, along with an additional time in 2017 with “Mommy”. (I wondered what happened between 2017 and 2020, but I wasn’t going to camp out at the shelter long enough for them to eventually show up again to ask.)

It was less windy, and perhaps a little warmer, than it was last night, which I hoped would translate into a better night’s sleep.

Tomorrow is a relatively short, but extensively rocky, day to the Charlie Irvin shelter, the northernmost shelter on the Tuscarora Trail. I set an alarm to make sure I’d get there with plenty of time, no matter how rocky the trail would be.