Today is the penultimate day of my Tuscarora Trail thru-hike, to the northernmost shelter on the Tuscarora, the Charlie Irvin Shelter.

It was a bit cold this morning, but not terribly so. With a “short” 10.8 mile day planned, I didn’t get up terribly early. Even though I was planning on a slow day of rocks, I still expected to get to the shelter with plenty of time before sunset.

It only took a a half hour of hiking to see what all the fuss was about yesterday. At Flat Rock, there was great view out to the Cumberland Valley. It probably looked pretty epic around sunset, but even now, in the morning, it was amazing.

After leaving the view, the early day had its fair share of trail overgrown with ferns, but at least it wasn’t bushes or vines with thorns. And ferns generally look nice. 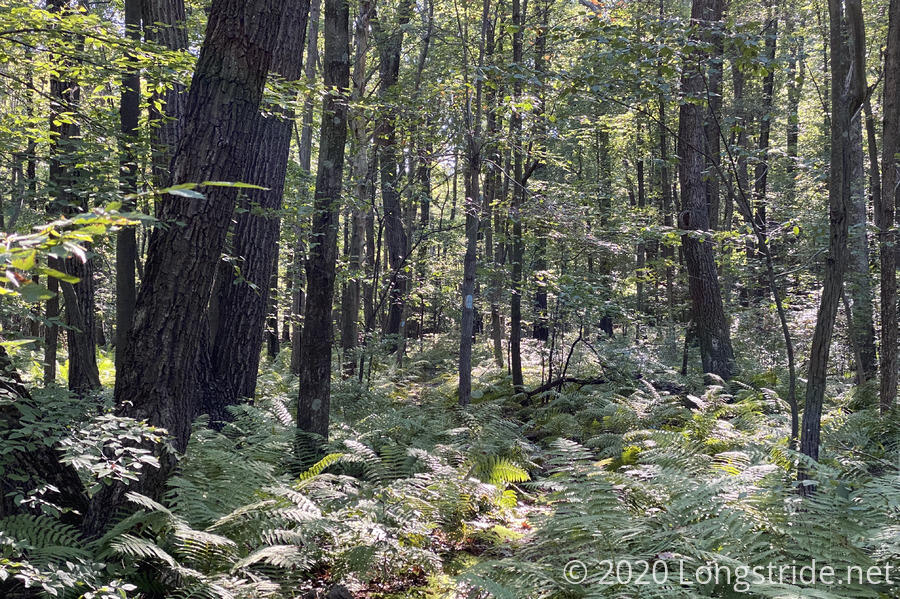 The trail then returned down the mountain to follow Wildcat Run for a bit, and then slowly climbed back up to the ridge, via a somewhat overgrown road bed.

The trail then entered the F J Reineman Wildlife Sanctuary, and continued following a dirt road through the sanctuary. Unfortunately, it shortly turned off the road, instead following a very rocky trail that followed along the very edge of the wildlife sanctuary, with private property just beyond.

This private property was evidentially owned by avid hunters, because there was no shortage of hunters nests, some fairly large. (And one or two toppled over to the ground.) The no hunting of the wildlife preserve and the (clearly) hunting allowed of the private property seemed a bit discongruous. It’s not like the wildlife could read the property boundaries and stay on the safe side.

It took about an hour and a half to go through the first section of rocky trail. As before, it was not well maintained, and I got off-trail a few times. Thankfully, it was not hunting season, but it was still a bit disconcerting to be sandwiched between two very-no-trespassing places and getting off-trail. Fortunately, both the private property and the Reineman Sanctuary property boundaries were well-marked (often better than the trail), so it was not especially difficult to find my way back to where I was supposed to be.

The slow slog through the rocks continued until I reached the day’s destination, the Charlie Irvin Shelter. Built out on a rock outcrop, it is one of the very few shelters I’ve been to that actually has a view.

There was an air of peacefulness here, and even though I had a trying day getting here, I was very much relaxed once I was able to take in the view and sit down for a bit.

As promised, Nukon had left a cache of several half-liter bottles of water inside the shelter. He’d also told me he had two other caches hidden elsewhere on the shelter grounds, but with more than enough water for my needs visible, I decided not to try and guess where he’d hidden the rest of the water.

Nukon paid a visit, arriving around 4:30ish, and we talked for a good hour and a half, before he needed to head home (and I needed to cook dinner).

As the sun set, the valley changed. Shadows moved and lengthened; everything took on an orange glow; street, building, and car lights started to come on. From the shelter with a view, I could only imagine what it’d be like in a few weeks once the leaves started turning, or even in the winter, with snow blanketing the valley. 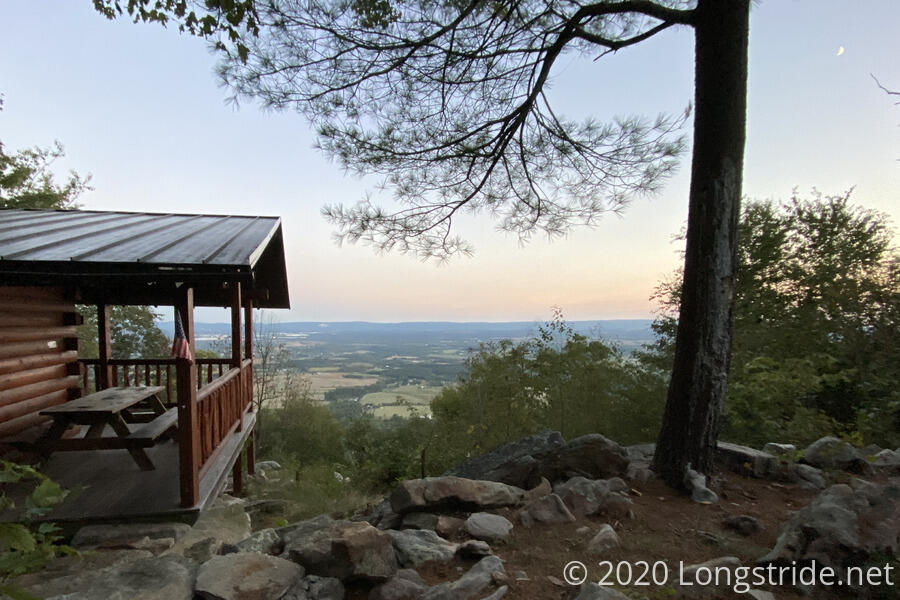 Even with a frost advisory in place for tomorrow, it was still warmer this evening than it had been the last couple of days. I hoped it wouldn’t be too cold.

Today was my last day entirely on the Tuscarora. Tomorrow, I’ll again reach the Appalachian Trail, the trail that started this whole adventure off...