Today's hike is dedicated to my dad, who died one year ago today.

The rain last night didn't last terribly long, but it occasionally blew into the shelter. Not enough to actually be problematic, just enough to remind you that it's raining outside, if for some reason you couldn't actually hear it.

I woke up shortly before sunrise, and managed to make it out of camp shortly after 7 am. There was a turtle on the trail shortly after leaving the shelter. 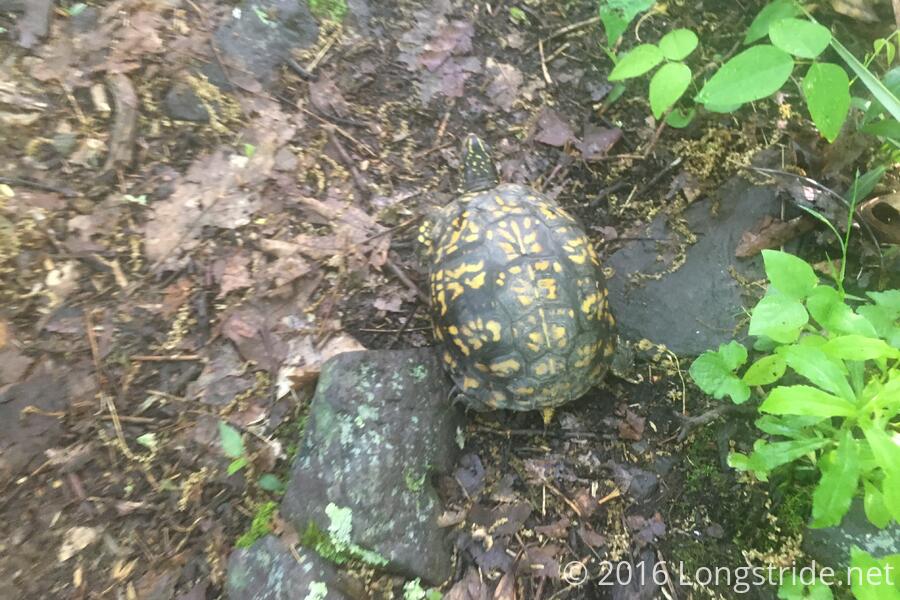 The last couple of days, the trail is starting to turn into the "green tunnel" the AT is often referred to. With leaves growing on the trees, views are being eliminated as visibility is reduced. That said, there were two notable views today. The first was early in the day, as the trail temporarily left the woods and went into a grassy clearing. The second was from a rock outcropping overlooking the mountains and valley late in the day after a steep climb up a mountain.

I've been having equipment problems all day. One of my poles is pulling apart again, so I'll have to fix that with superglue tonight. The hip belt on my pack refuses to stay velcroed at the position I want it in, so it winds up lengthening, moving the weight off my hips and back onto my shoulders. Fortunately, since I'm nearly out of food, the pack weighs a lot less than it would after getting to town, so it's not as bad as it could be.

Also, I discovered after I stopped for second lunch that the heel on one of my socks has ripped open.

It was also after that lunch that I got rained on. My pack didn't get too wet since I've had my pack cover on the past few days, because of threat of rain, and also to make any caterpillars that fall on the bright orange cover highly visible, since it also seems to be caterpillar season. (Which reminds me: yesterday, while at the shelter and being rained on by caterpillars, a bright green one tried to cocoon itself on my bright green food bag. Nice bit of stealth on part of a would-be butterfly, but it wasn't enough to hide from me.) I got somewhat soaked, though. I didn't bother putting on my rain jacket since I knew I'd be changing clothes once I got to the hostel.

Shortly after 4, I made it to the Woods Hole Hostel, and got a shower. It's been seven days since my last shower, so I must have smelled downright awful. (I tried smelling my shirt after the shower; it was pretty foul. Hooray for a change of clothes!)

The hostel has a scale in front of the house; it appears I've lost six or seven pounds, depending on how much my clothes weigh. I'm going to need to eat more for dinner tonight and I'm town tomorrow.

I'm staying in a shared room tonight with Christine (wife of thru-hiker Alpaca), and Echo and her boyfriend. (In a bit of serendipity for Echo, the room has two twin beds and a queen, and Christine and I both picked the twins before she got here, and before her boyfriend was coming.)

The hostel seems nice, but the staff seems slightly disorganized. The shuttles into town for dinner (which I had been told was to a Mexican restaurant) instead went to a tiny little town festival in Pearisburg aimed at hikers; I guess Pearisburg's equivalent of Damascus's Trail Days. There were four tents: two for food, one for beer (with a pretty decent selection, mostly of Starr Hill), and one apparently for the Appalachian Trail (though I didn't get a chance to check that one out). There was also live folk music, apparently from a group that plays at contra dances. (I say this because, as I was leaving, they were rounding people up for what looked to be an introductory contra dance.)

I ordered myself a hamburger, and while I waited, inadvertently complained to one of the hostel's owners about the misinformation about dinner. That is, I was intentionally complaining to the guy that drove us there, not realizing he was one of the owners.

I may have been a bit cranky, having just hiked 22 miles, only to have the dinner shuttles, which left half an hour late and also in a somewhat disorganized fashion, go someplace entirely different from expectation. That I somehow unexpectedly got roped into helping to unload heavy bags of mulch from a pickup truck before we left didn't help either, I'm sure.

A side digression: Hostels, please make your staff identifiable as staff. Give them a cap, or a logo shirt, or a name tag, or something that sets them apart from hikers (and especially work-for-stay people).

Anyway, my complaining caused a shuttle to the Mexican restaurant to materialize, and after I finished stuffing a cheeseburger down my throat, Christine (the driver), Echo, Tall One, Duracell, and I went to La Barranca for second dinner.

Amazingly, Beast and his mom were eating there as well, so we were able to catch up a little. He's got new shoes he's going to try (as well as another pair that are going to Roanoke), and he'll be back on the trail with me on Saturday, when we leave Pearisburg.

After Mexican food, we (the five of us in the car) made a quick detour to Food Lion, before going to Dairy Queen (yay, banana split; but the only available flavors of ice cream are vanilla and chocolate? boo…), and finally heading back to the hostel. Which was locked. Fortunately, not for long, as the rest of the shuttles (with the owners) got back immediately after us, despite being completely independent.

While waiting for her boyfriend to arrive, Echo and I discussed her recent experiences on the trail with bears. She's had two encounters; one by herself and one with a group of hikers. One night, a bear came sniffing around her tent, and she managed to scare it off into the woods, but in the direction of her food bags. She tried to scare it off from there, but it just stayed and watched, so at night, she had to pack up camp, get her food bags, and leave for another campsite. In the other incident, a bear came sniffing around someone else's tent (at a campsite with a dozen people), and two people were able to scare the bear off entirely.

Makes me think that perhaps people (including myself) are becoming too lax about hanging bear bags.

The last couple of nights, my legs have been really itchy from below my knees. It's only been a problem at night, and not during the day; I assume because I'm too busy hiking to notice. I blame the insects. Stupid bugs. My legs are not food.

Tomorrow: breakfast at the hostel, then short 11 mile day into Pearisburg.