Beast and I got up after 8 today, and went to Dairy Queen for breakfast. (I wound up having two.) After finishing packing our packs, We walked over to the Hardees, on the right side of the street for trying to get a ride out of town to the trailhead. After trying to get a ride unsuccessfully for ten minutes we gave up; no one was going in that direction.

The road to the trailhead I got off the trail at is unsafe to walk along (busy road, with little in the way of shoulders), so this unfortunately meant we had to walk to an earlier trailhead, and I had to rehike a very muddy section of the trail, now with a fully loaded pack.

It was interesting to compare the two hikes. It was mentally easier, in that I knew where I was going and wasn't constantly questioning where the trail was going, and also because I knew where the trees were that I'd have to climb over, and how to climb over them. Physically, it wasn't any less muddy, and the heavier pack just made everything harder. 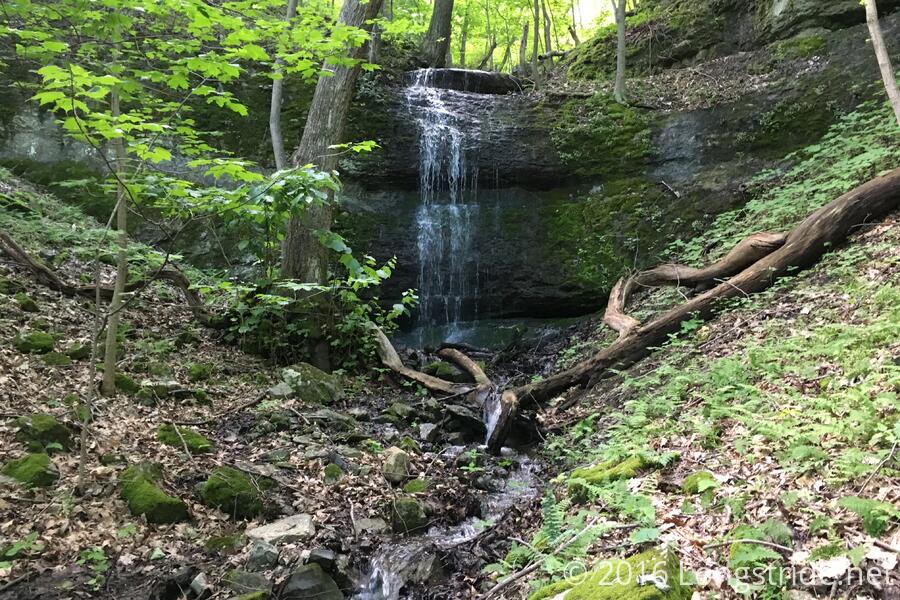 Waterfall and Stream — Waterfall on a recently-opened section of trail.

While on that section, though, I passed a couple of local day-hikers, who did confirm that it is a new, rerouted, section of the AT that passes further away from town.

I was somewhat low-energy today, which I attribute to being up after 11 pm two days in a row. As a result, and in combination with the rain today, I was just mentally not on the trail, and it made for a frustrating morning hiking up the mountain.

Before the rain started, we hiked past an active landfill. It smelled bad, as you might expect. Below the landfill, we crossed an obviously polluted creek, with a sign warning against drinking. Interestingly, the sign was green, rather than red.

Eventually, I made it to the first shelter on our planned route, Rice Field Shelter, and stopped for lunch. At Rice Field, trail reaches the Virginia-West Virginia border, which it follows along a ridge for about nine miles.

After lunch, I felt much better, so we continued on. About a mile and a half later, around 3:30, we reached a water source and campsite, and stopped so that Beast could get more water. Originally, I was feeling optimistic for pushing forward another 3.5 miles to the next campsite, but while waiting, I just completely ran out of steam, so we decided to just camp where we were.

Although we hiked over 11 miles today, because we had to hike to the trailhead and repeat a section, I only advanced 8 miles down the trail, which was somewhat disappointing.

The whole time we were at camp, it was windy, with dull grey clouds flying past. We hoped they would relent and let the sun through, but the sun never really came out.

Tired, and up way past my bedtime the previous two nights, I turned in early, around 7 am.