It dipped below freezing overnight; I awoke to find frost on my boots. It was really not what I was expecting from New Mexico in mid-May.

The cold delayed my start slightly, and I didn’t leave camp until 8:15. Expecting at least a few more water crossings, I continued to use my waterproof socks, and I’m glad I did. There were a few crossings that were low enough to rock hop across, but there were nine more wet river crossings, including a fairly deep beaver dam, so the socks definitely helped keep my feet drier.

A few times, the trail climbed up steep embankments to get around rugged ground adjacent to the river.

A Last View of the Gila River — The Middle Fork Gila River, shortly before its (current) apparent source at Gilita Lake.

But, this morning’s stretch of trail was the Middle Fork’s last gasp, ending (or rather, starting) as the outflow of a lake identified on maps as “Snow Lake”, but with a sign calling it the “Gilita Lake”. (Maps show the river originating further north from the lake, but once I passed the lake, there was no flowing water anywhere.)

In all, there were nine more fords of the Middle Fork, bringing the total number of (wet) river crossings to 238 over the last few days. From here, it’ll be a lot drier, with a lot less shade, but at least my feet will be dry. 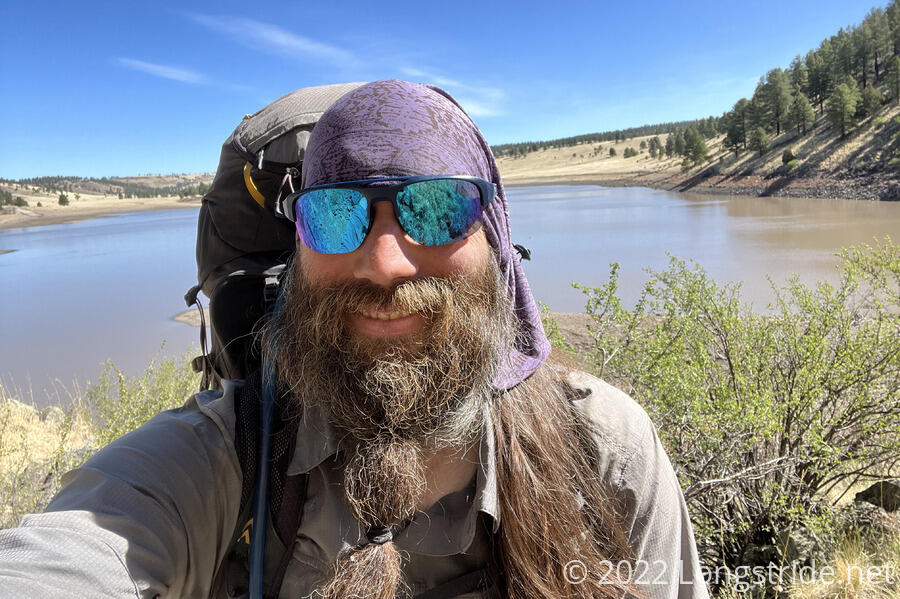 The trail crossed an embankment built to contain Gilita Lake for recreation purposes, and then meandered above the lake’s high water line. I took a shortcut, following a more direct trail cut by hikers through what would likely have been underwater during the rainy season. A lone egret stood watch in the lake, and flew away as I passed on the trail far above it.

I caught up with everyone from camp at the Dipping Vat Campground, a car camping campground with pit toilets, trash cans, picnic tables, and a water spigot. I took the opportunity to get some more water and have a short snack and break.

Leaving the campground, I started off following the wrong road, but quickly realized my mistake, and cut across a hill to go directly to the road I was supposed to be on. There were footprints already on the ground where I was walking; I was not the only hiker to have made this mistake.

The trail followed a gravel road out of the campground, then branched off to a dirt road that gradually diminished, until it reached a fence. A sign posted on the fence welcomed us to one of the “wildest” areas in New Mexico, and also advocated ending cattle grazing on public lands.

The trail continued as an actual trail up the middle of a canyon. With cows. It was unclear if this was public land or not. 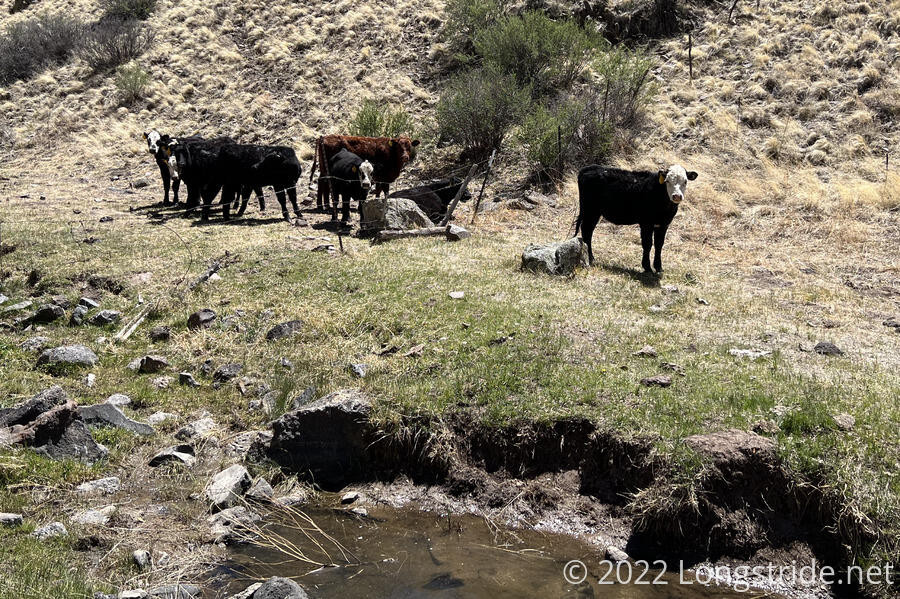 Cows at their Watering Hole

The next stop of the day was at a pond with a (nonfunctional) solar-powered water pump. Two articulated solar panels provided a nice shade, but since they weren’t actually hooked up, they swung freely in the wind. They sounded like a broken harmonica, except for the occasional gong when a hiker failed to duck out of the way.

I took about a two hour break, got water from the pond, and cooked my dinner. As I finished my break (a few minutes after everyone else left), two cows walked down the hill opposite where we had stopped and went down to the water.

I continued up the canyon, leaving the pond and cows behind, slowly gaining altitude until reaching a vast field.

The trail joined a dirt road, and made its way through the countryside. I stopped for a few short breaks in the shade, playing leapfrog with everyone.

Eventually, the trail joined a gravel road in a forest lined with trees, which the trail followed the remainder of today (and will follow for the first part of tomorrow).

After a while along the road, we passed an area of the forest on one side of the road that was burned on the ground. It smelled very recent, so I thought that perhaps this was a proscribed burn as part of fire control efforts for the nearby fire that we might have to detour around.

Fifteen minutes later, I reached another dirt road crossing. A fire crew was theirs, sitting in their truck, waiting. Speaking with them, I learned that the burned area was the fire, and that it was now out, so that no detour was necessary.

The clearing was a convenient break point, so I and everyone else stopped here for about half an hour.

Our last stop of the day, further down the gravel road, and then off trail a bit was another solar-powered well that appeared connected but not running. Comments in our trail guide suggested the pump could be turned on by toggling a switch on one of the panels, which we did, but the pump didn’t turn on. There was also a generator, but we didn’t feel like it would be wanted for us to mess with it. Besides, there was plenty of water in the tank.

Dog Bite climbed into the tank, standing on a barrel floating in the water, and collected water for everyone else. Patches went to a nearby smaller tank, where water was closer to the top and easier to get.

After resting at the tank for an hour, the sun dipped behind a mountain, and the light dimmed and it started to get cooler. Simple and I headed away from the water tank, looking for a place to camp that was “far enough away” from the tank to not annoy the cows. We found a good spot that was flat, large enough to hold all seven of our tents — camping here was everyone from yesterday’s campsite, me, Plus One and Dog Bite, Simple, Mr. Freeze, Tiempo, Noodle?, and Chairman. 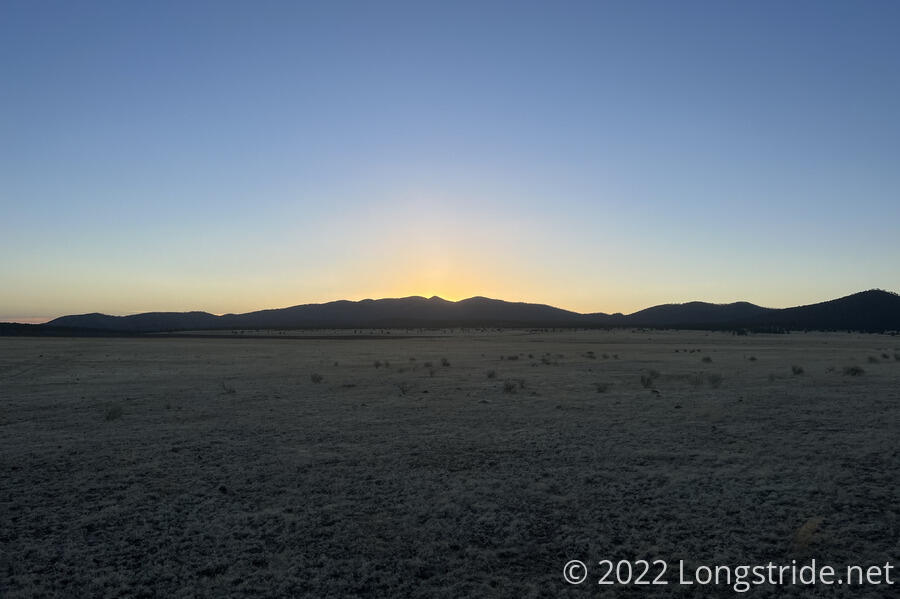 Tomorrow, we continue on a roadwalk, but for the first time in several days, there are no water crossings. Horray for dry feet!