A twenty-one mile hike brought us to yet another of the CDT’s alternate trails, but bad news soured what was otherwise a nice day of hiking.

Sometime in the morning, before I got up, the TLC Ranch ranch hands brought us a six-pack of root beer, continuing their wonderful trail magic. 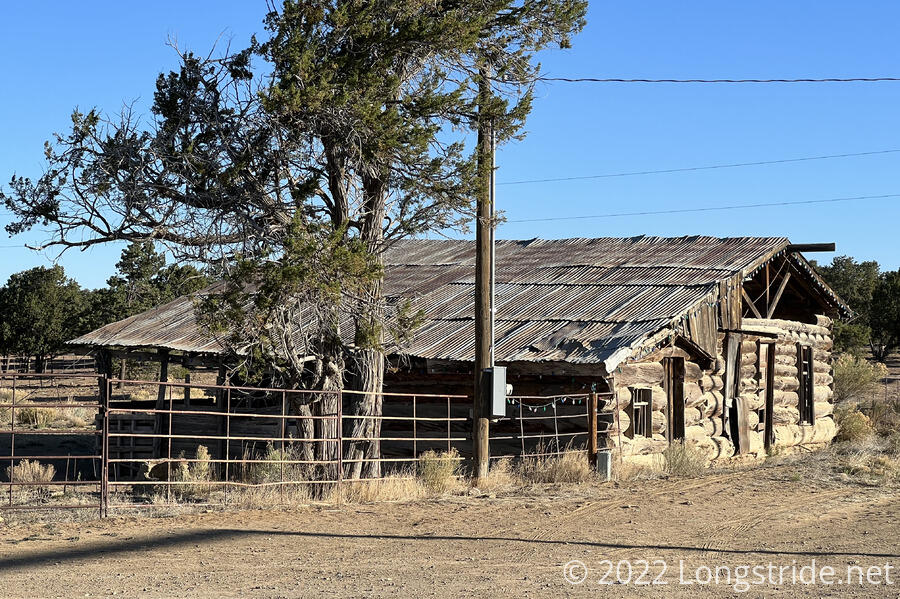 I got started at 7:30, continuing down the dirt road from yesterday. Shortly after, I passed a donkey that was beyond the fence on one side of the road. I don’t know if guard donkeys are a thing, but it was definitely keeping an eye on me and running further along to keep up with me as I hiked past.

We stopped for a brief time at a solar well to get water. We initially thought the waypoint on our guide was not accurately placed, but after we started hiking again, we passed another solar well where our map said there’d be one. So I guess an additional one had been installed.

Further down the road, there were a few llamas grazing near the road. One of them seemed especially curious, and wandered over towards us as Simple and I hiked closer. Dog Bite later told us he’d initially thought them to be camels. 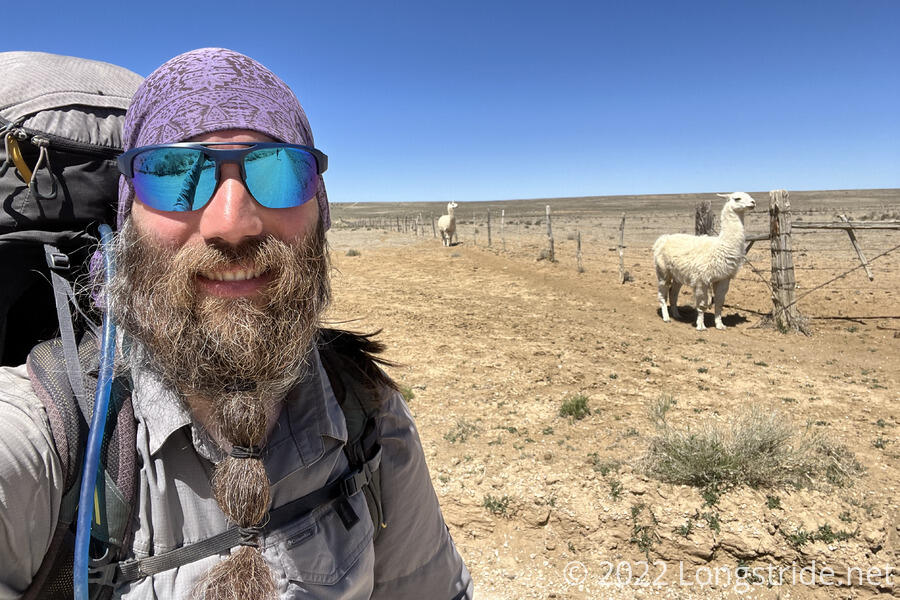 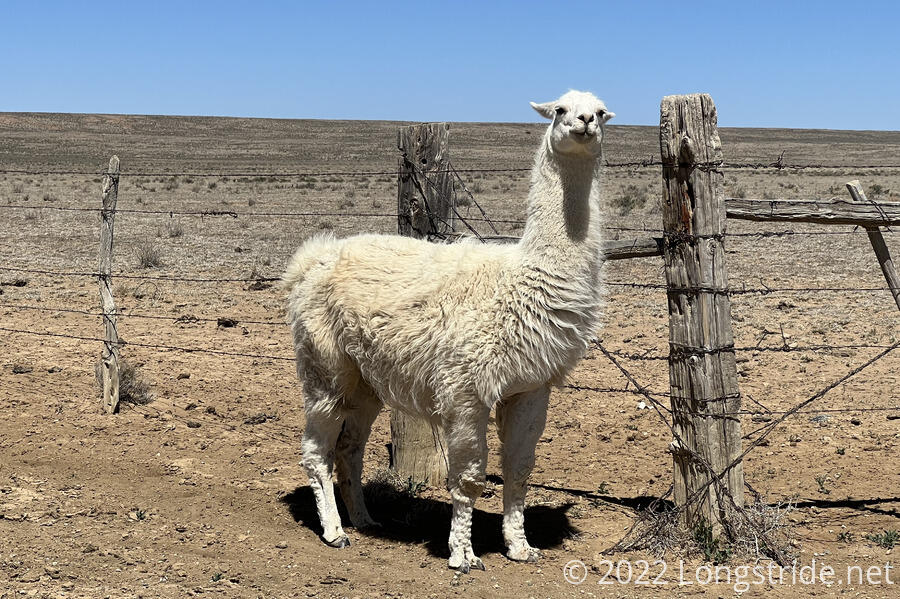 We reached a junction, and had a choice to make. (Well, that’s not really true, we’d already made the choice, now was just time to execute it.) From the dirt road we were hiking down, the CDT proper heads west and loops through the “Chain of Craters”, a series of volcanic calderas. But, this route has a long, dry stretch, and there did not seem to be much water available. We instead opted to take the Cibolla Alternate and head east, towards the Cibolla National Forest. This is shorter than the main route, which forms most of a loop, but adds to a long paved road walk, which we’ll get to tomorrow.

The alternate started out on a sandy trail that was hard to walk on, eventually reaching the barbwire fence border of Cibolla National Forest. Now around 1 pm, we stopped under a large tree that provided ample shade for a long break, and I cooked dinner.

Mr. Freeze, true to her name, was cold under the shade of the tree, even though it was still quite warm out. She put her down jacket over her legs, and borrowed Dog Bite’s to wear to keep the rest of her warm.

While we took our break, we got the bad news we had been waiting for: three national forests in New Mexico, the Santa Fe, Carson, and Cibolla National Forests are closing effective 8 am on Thursday (two days from now), as a precaution to prevent fires in those forests.

Right now, It’s unclear exactly how much of the trail those closure orders affect, but it seems like it means that most, if not all, of the trail in New Mexico north of Grants will be inaccessible.

But that’s a problem we’ll figure out how to deal with when we get to Grants. But I still like the bikepacking option, if we can make it work.

We continued past the fence, joining a trail that took us to a dry riverbed. 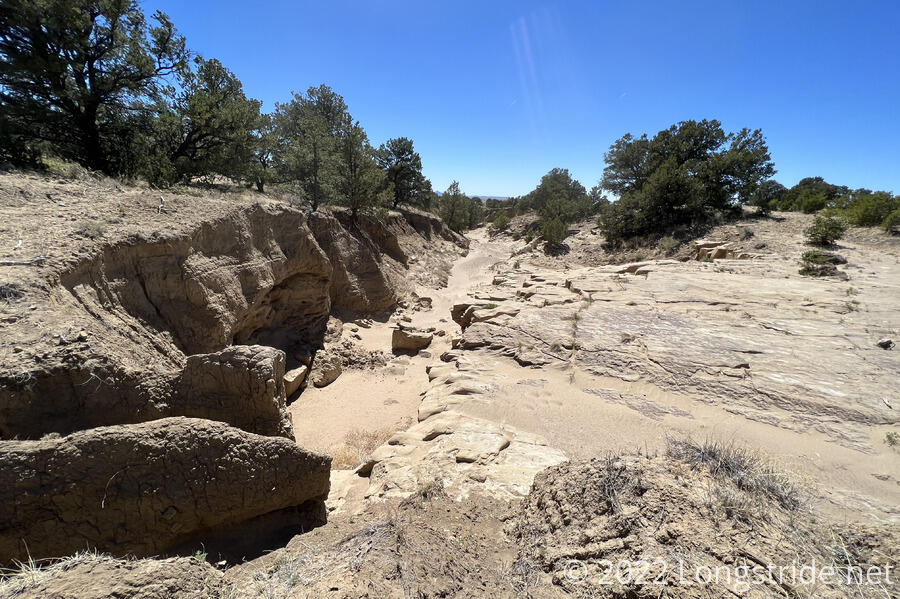 At first, it appeared that the trail actually followed the riverbed, which was also very sandy and hard to walk on. After awhile, I realized the trail did not actually follow the riverbed, instead following the ridge to one side. With a little difficulty, I climbed out, following the footsteps of some other unfortunate hiker who also hiked this far on the wrong path. I’m glad I climbed out when I did; the river bed seemed to get deeper and deeper as it went upstream.

After only a couple of miles, we stopped for a break at an old homestead. After there, the trail turned north, climbing a mountain and bringing us to a somewhat silty pond that we collected water from.

The climb up to the pond was kind of difficult, not so much because it actually was, but between the heat and sun, and the difficult sandy trail earlier, the news of the fire closures was rather demoralizing.

The trail continued uphill a little further, and then joined a dirt road heading down the other side of the mountain, taking us into a canyon with another deep riverbed in it. 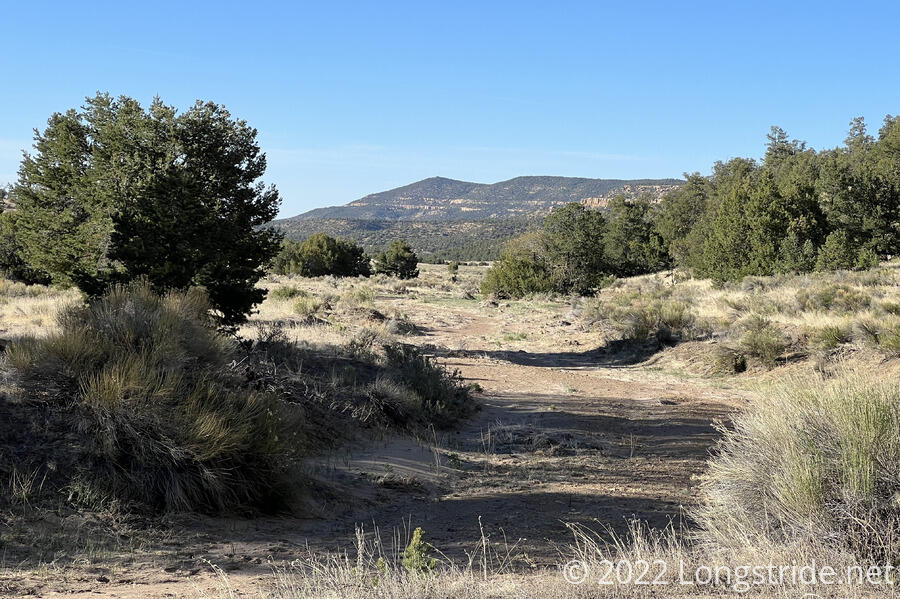 The Trail Follows a Dirt Road

After a few more miles, we stopped at a bit of a clearing at a bend in the road, where there was enough flat space for us to all set up our tents. Two other hikers joined us, Trail Brain (who I think is from Germany) and Fluffy (who hiked over 30 miles today).

Continental Divide Trail, 2022
« (Day 22: Are Those Clouds In The Sky?) Previous Entry
Next Entry (Day 24: Choosing All The Wrong Rock Scrambles) »