A short (but quite exhausting) day through snow and blown-down trees brought me to the town of Pagosa Springs, where I’ll resupply and rest up a bit.

It was cold overnight, but a little warmer than yesterday. I’d set a 5 am alarm, and managed to leave camp by 6:30, hoping to catch up with the rest of the group and get to the trailhead 8.5 miles ahead.

If only it could have been that simple. 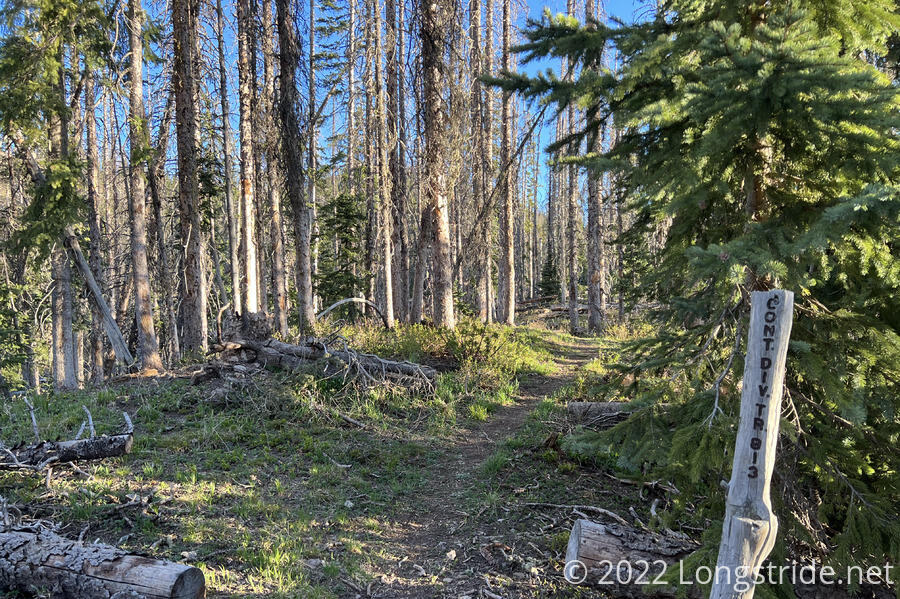 The Forest at Silver Pass

The trail immediately north of Silver Pass was a complete rats nest of blowdowns. It took me over half an hour to go three quarters of a mile to get past the first maze of fallen trees.

Once that was done, I still had to navigate around the occasional fallen tree the rest of the day. Often, that would be complicated by the snow still on the trail making the easy or obvious path harder or inaccessible. In one place shortly after the blowdown maze, I wound up sliding down about ten feet of ice after climbing up a hill to get around a blowdown. (Being so early in the day, the snow had frozen, so it was hard slippery, rather than being soft enough to let me get a grip. Microspikes would have prevented me from sliding, but and most of the trail was snow-free and I wasn’t going to put them on for just one short stretch.)

Shortly after that, I saw a shovel to the side of the trail; clearly a trail maintainer had (accidentally?) left it behind.

The combination of snow and blowdowns, plus whatever was causing my sore throat, was very tiring, and I stopped for a break after about three hours, having gone only about four and a quarter miles. Rarely have I been so exhausted from such a short hike. 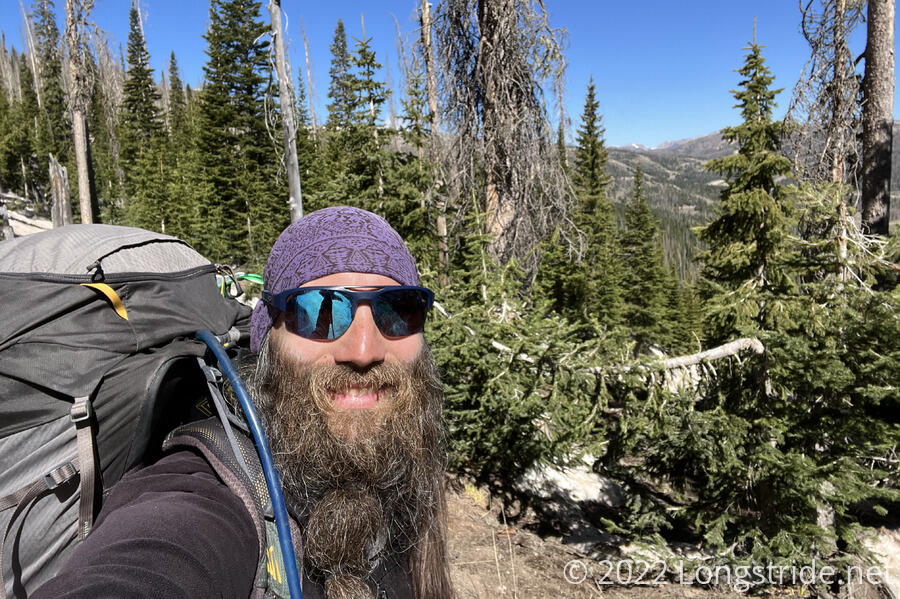 The next stretch of trail was mostly buried under snow, which required a lot of “bushwhacking” through the woods and guessing where to go. Stomping through snow-covered woods with no sight of the trail was really not on my agenda for this morning, and it only served to make the morning even more tiring.

On my topo map, I’d noticed a road that went lower than the trail; I briefly regretted not taking that and doing whatever roadwalk necessary to get to where I needed to be. It would have been a lot easier (not to mention safer), but certainly wouldn’t have been adventurous.

I also had that thought when I crossed a ski slope; might have just been better to walk down the slope to lower elevation and then find my way to the trailhead.

Eventually, though, I reached the boundary of the Wolf Creek Ski Area, and the trail began roughly following the top of the ridge for a while. A wide flattish area made for a much welcomed change of pace; much of the trail to that point had been on the side of slopes.

Welcoming me to the ski area was a large piece of tracked snow equipment, stranded above the ground on an island of snow. 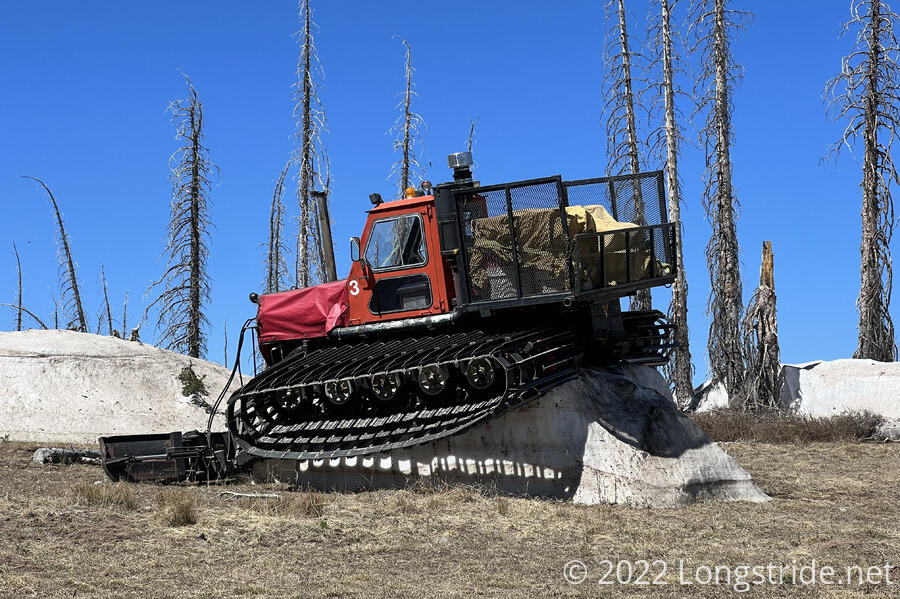 There was still plenty of snow on the ridge, and the trails was buried half the time, but the ridge was wide enough that there was more often than not a clear path to follow alongside the snow mounds.

Up on the ridge, the wind picked up, especially once the trail left the ridge and went alongside the steep mountainside.

Around quarter after 11, I reached the ski warming hut “we” had been attempting to reach yesterday. I could see that no one was inside, but I still went in to check it out. Getting in took a bit of effort; the door was raised several feet off the ground, with no stairs, and I had to push the door open and then climb up to get in.

It was small and cozy; there was a gas stove, and electricity. I forgot to notice if there was water or not.

Past the warming hut, the trail followed the ridge agin, down the middle of a field. Camping would have been possible here, though it likely would have been very windy overnight. 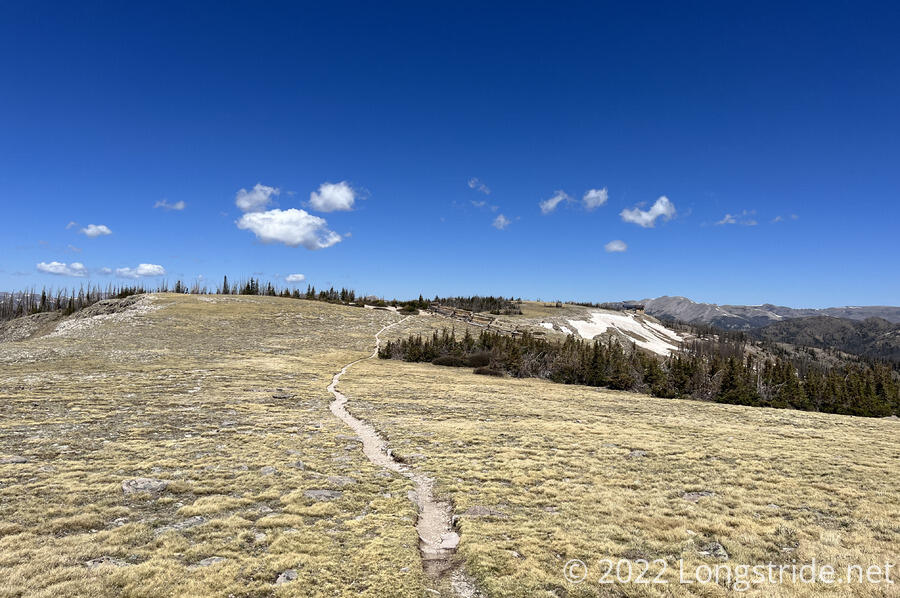 Descending from the ridge down to the Wolf Creek Pass trailhead was a chore. It was relatively steep, with lots of snow and blowdowns. I think I probably wound up cutting half the switchbacks to avoid the snow.

On the way down, about a mile from the trailhead, I got a message from Patches that he and the rest of the group had just gotten to town, and were arranging to stay at another Air B&B. It was very expensive, but split between six people, it worked out to something like $60/night per person, which seems to be pretty good as far as lodgings in Colorado are concerned.

Shortly before 1, I finally reached the road after just over six hours of hiking, having only hiked 8.5 miles. It was a very slow, very exhausting day, and I was glad to be done with hiking, at least for now.

Needing to get into town, and not wanting to walk the 23 miles to town, I asked everyone at the trailhead if the could give me a ride to Pagosa Springs. Unfortunately, everyone was heading in the other direction, away from town. And my attempts at hitching a ride from cars heading towards down were not fruitful.

After about half an hour at the trailhead, I finally got a ride with Chris and Marilyn, two day hikers who had been out on the trail north of Wolf Creek Pass.

I commented to them on how lush and green the forests looked; they said I’d come at just the right time, and it wouldn’t be too long before everything starts to dry out. I mentioned my worry about fires in Colorado and hoped to be through before fire season started; they mentioned that it’s been unusually windy this year, which no doubt has contributed to the large number of blowdowns.

On the ride into town, my sore throat was joined with a stuffy nose. Clearly, I was getting a cold, or something. No wonder the last couple of days have been so exhausting.

Chris and Marylin dropped me off at Mountain Pizza, where the rest of the group had gathered. Very hungry, I got (and ate) a whole pizza.

We hung out at the restaurant for a couple of hours, until our Air B&B was available, and then we walked there.

Mr. Freeze, Patches, and someone else went to the grocery store to pick up snacks, beer, and supplies to make pasta tomorrow for dinner. Wanting to go, but feeling tired and run-down, I chipped in for a bottle of wine. (I wasn’t expecting it, but I wasn’t surprised when Mr. Freeze came back with a box of wine instead.)

I got a shower, which was much needed and relaxing. Afterwards, all of us except for Mr. Freeze went to Riff Raff Brewing Company for burgers and beer. When we got back, we found her attempting to find a leak in her sleeping pad, which we assisted her with, and together, we found the leak near the air valve stem. Patches also tried to find the leak in his sleeping pad (which was blown into a bush the first night out of Chama).

Tomorrow, I’m staying in town, but in all likelihood, it will be anything but relaxing, with lots of chores to accomplish.